Buckbrush, or coralberry, grows throughout Missouri. This familiar thicket-forming shrub bears dense clusters of pinkish-red berries that persist through most of the winter.

Buckbrush is a slender, erect or ascending, thicket-forming shrub that spreads by roots, usually 2–4 feet tall. Most of the stems are upright to arching, but some creep almost vinelike along the ground, where they send out runners for several feet and root to form new thickets.

Leaves are simple and opposite, the blades 1½–2 inches long, ½–1½ inches wide, egg-shaped to oval, the tip rounded to blunt, the base rounded or wedge-shaped, the margin entire, sometimes with a few large, rounded teeth; the upper surface is dull green, smooth or slightly hairy; the lower surface is paler, smooth to hairy; the leaf stalk is very short, less than ⅛ inch long, hairy.

Bark is brown, peeling into small, short flakes that are easily rubbed off or shredded into long, thin strips; the wood is soft, nearly white, with a small pith.

Flowers July–August, in clusters of 10–20 flowers at the tip or along the axils of stems; flowers are greenish white, sometimes purplish, about ⅛ inch long, bell-shaped, somewhat hairy within; petals 5, blunt; stamens 5.

Fruits September–October, often prolific, persistent through most of the winter, in dense clusters; the berrylike fruits (technically, drupes, structured like a tiny cherry or peach) are pinkish red to coral red, globe-shaped, about ¼ inch wide; seeds 2, hard, egg-shaped, flattened on one side, white, smooth. Rarely, you might fine a plant that bears white fruits.

Similar species: Two other snowberry (Symphoricarpos) species have been recorded in Missouri. Also, some people may confuse beautyberries with the snowberries:

Occurs in bottomland forests; rich to dry upland forests; bases, ledges, and tops of bluffs; banks of streams and rivers; margins of upland prairies; and pastures, old fields, fencerows, railroads, and roadsides. This species is planted as an ornamental because of its striking red berries and tolerance of drought, cold, and heavy soils. Buckbrush is also an indicator of degraded forests and woodlands that tends to form dense thickets in response to grazing disturbance.

The snowberries (genus Symphoricarpos) have traditionally been placed in the same family (the honeysuckles, or Caprifoliaceae) as horse gentians, viburnums (including the blackhaws and arrowwoods), elderberries, and honeysuckles. More recently, however, botanists have split the elderberries and viburnums into a separate family.

The presence of large populations of buckbrush in woodlands and open land is indicative of past or current grazing. Cattle seem to avoid this plant. Buckbrush can be a problem plant in pastures, hay fields, and roadsides.

Buckbrush is used in landscaping for its attractive red fruit (which persists through the winter) and autumn leaves. It is a showy native plant that is good for insects and wildlife. It’s easy to grow, but make sure you remove suckers and runners unless you want it to spread. It can form an impenetrable thicket if you let it go. It is good for preventing erosion on slopes, as an informal hedge, and for any open areas where it won’t be a problem when it spreads.

Branches with clusters of bright pink berries can be used in dried flower arrangements in winter. Stick some sprigs in your native-plant-themed holiday wreaths.

Cultivars of this species, and hybrids of various snowberry (Symphoricarpos) species, have been developed and are popular with gardeners and landscapers. The profuse, long-lasting pink, white, and purple berries make them very attractive.

Symphoricarpos is from the Greek and means “fruit borne together,” with reference to the clustered berrylike fruit; orbiculatus refers to the rounded leaf.

Another common name is “devil’s shoestring,” apparently for the tough, low-lying, horizontal branches that can trip you as you’re walking.

Although this plant is sometimes called “Indian currant,” there is no indication of it being eaten by humans. Saponins in the fruits make them taste bitter, and they are to some degree toxic to people, causing nausea and vomiting if eaten in large enough quantities. Native Americans apparently crushed this plant, pushed it into stream water, and used it to stun fish that could then be collected downstream from the water’s surface. There are records of the plant being used medicinally.

So how did it get the common name “Indian currant”? Historically, common names of plants often used the word “Indian” to mean “not the true kind” or “mock.” Usually, these names with the word “Indian” were bestowed by native Europeans to New World plants that somehow resembled a so-called true (usually European) plant. It differentiated the European type of plant from the kind that indigenous North Americans knew. In this case, true currants are plants in genus Ribes, which are in a different family. The most famous true, edible currants are the cultivated black, red, and white currants that are all native to Europe. North America also has gooseberries and some other true currants in genus Ribes. By the way, a similar situation is the term “Indian corn,” given by Europeans to our native American corn (the grain famously domesticated by Native Americans which we now call simply “corn”), to differentiate it from what the English long called “corn,” the grain that we know as wheat.

Buckbrush fruits are persistent into winter, but apparently they are not eaten to any extent by birds, except in harsh winter weather when more preferable foods are unavailable. Apparently, ongoing freezing and thawing over the course of winter renders buckbrush berries tastier to birds and mammals by late winter and early spring. Also, by that time, the preferred sources of food may be running out. Birds and mammals digest the fruits and excrete the seeds, dispersing them away from the parent plant, starting new buckbrush colonies.

At least one reference names 12 species of birds that eat buckbrush fruits, including the cardinal, northern bobwhite, wild turkey, greater prairie-chicken, and ruffed grouse, in addition to being browsed by white-tailed deer. Small mammals also will also eat the fruits during severe winter conditions.

Many types of insects use buckbrush as a food plant. The snowberry clearwing and some other hummingbird moths (sphinx moths that mimic hummingbirds or bumblebees) use buckbrush and other honeysuckle family plants as host plants for their caterpillars. 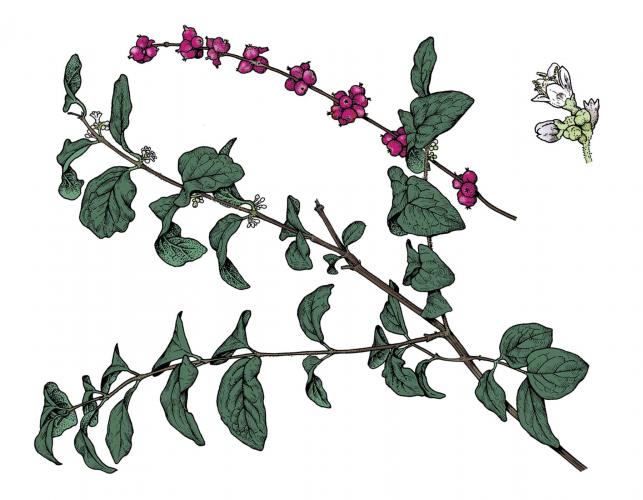 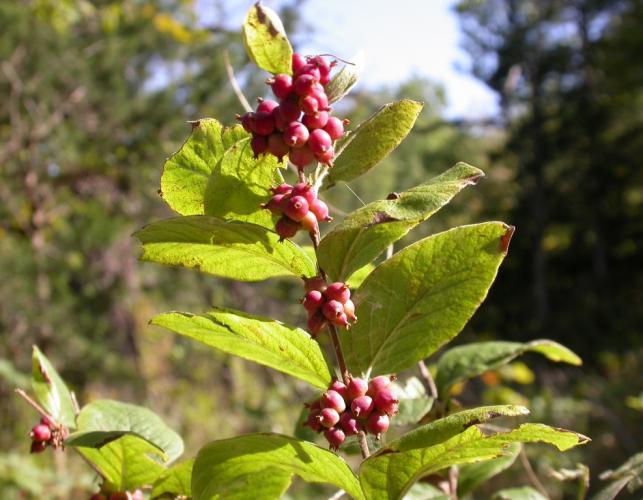 Caption
Buckbrush, or coralberry, grows throughout Missouri. This familiar thicket-forming shrub bears dense clusters of pinkish-red berries that persist through most of the winter.
Right to Use
2/7
Image 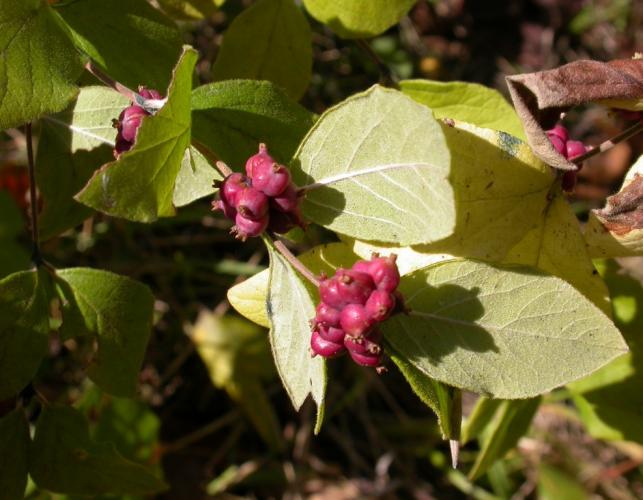 Caption
Buckbrush leaves are simple and opposite, about 1½–2 inches long. The lower surface is paler than the top and can be smooth to hairy.
Right to Use
3/7
Image 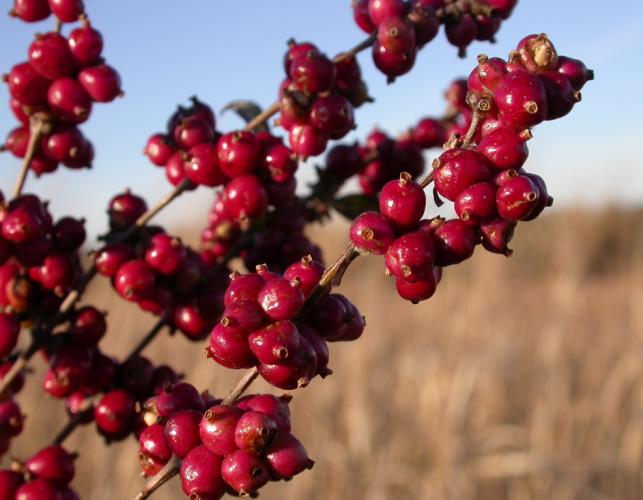 Caption
The bright clusters of buckbrush berries persist on the stalks long after the leaves have fallen away. They will remain on the plant through most of the winter.
Right to Use
4/7
Image 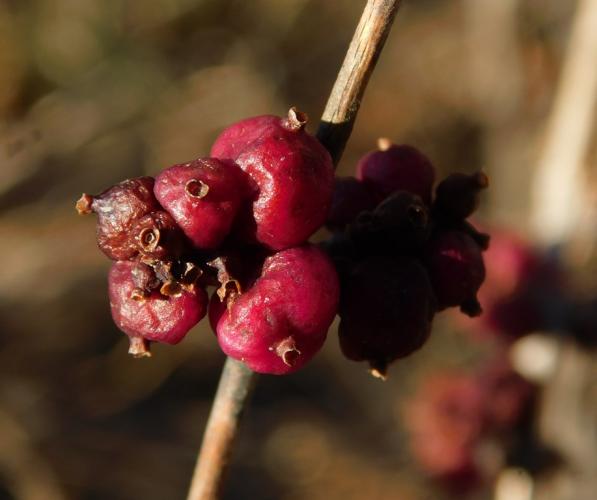 Caption
By late winter, buckbrush berries have softened and mellowed. Apparently, birds and other wildlife find the winter-tempered fruits more palatable. Or, perhaps, the preferred fruits have been eaten up and these are now the best of what’s left.
Right to Use
5/7
Image 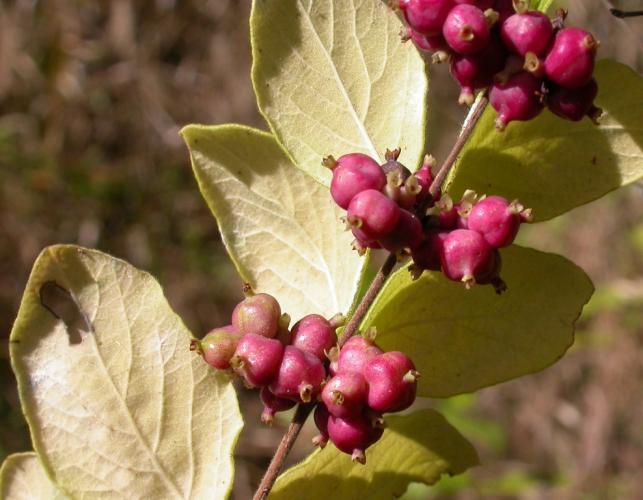 Caption
Buckbrush berries, on the outside, look a little bit like tiny pomegranates.
Right to Use
6/7
Image 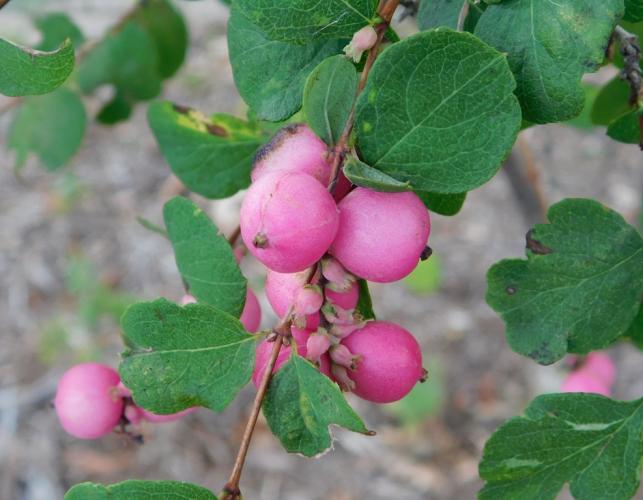 Caption
Cultivars of Missouri's buckbrush (or coralberry) species are available that offer profuse, large, long-lasting pink, white, or purple fruits. These are an excellent native choice for landscaping.
Credit
Julianna Schroeder
Right to Use
7/7
Image 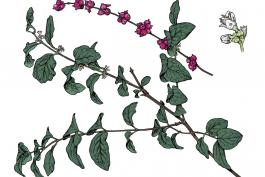 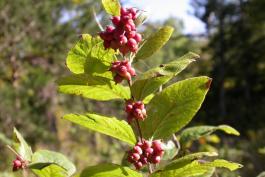 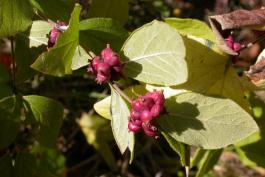 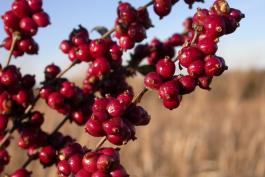 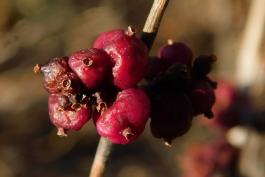 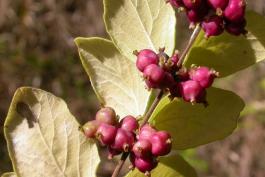 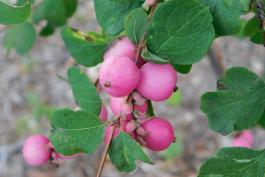 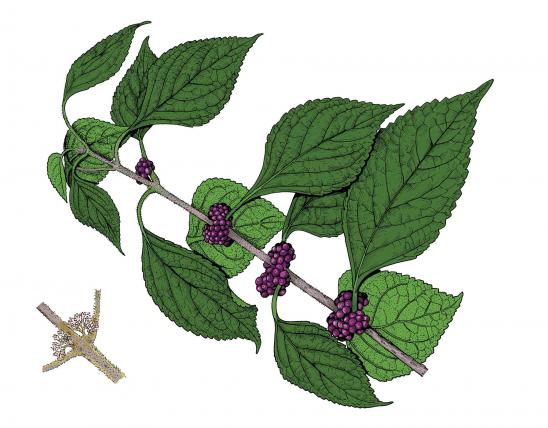 American Beautyberry
About Trees, Shrubs and Woody Vines in Missouri
There are no sharp dividing lines between trees, shrubs, and woody vines, or even between woody and nonwoody plants. “Wood” is a type of tissue made of cellulose and lignin that many plants develop as they mature — whether they are “woody” or not. Trees are woody plants over 13 feet tall with a single trunk. Shrubs are less than 13 feet tall, with multiple stems. Vines require support or else sprawl over the ground.