Common elderberry is a shrub to 8 feet tall, forming colonies from root sprouts, with branches occurring near the top.

Twigs are rigid, round but sometimes angular or grooved, smooth, light yellowish brown or grayish brown, with prominent pores. Bark on trunks lacks grooves; the large, raised pores make it feel rough. The wood is white, soft, with a large pith.

Flowering is in late May–July. Flowers are in conspicuous, large, flattened, dense clusters, sometimes up to 10 inches across, at the tip of twigs; white, sweet-scented; individual flowers about ¼ inch across; petals 5. Flower stalks with fine lines, green at first, reddish later; there are usually 5 primary branches.

Both poisonous and edible. The stems, leaves, and roots are poisonous, and ingestion can cause vomiting and diarrhea. Elderberries have been used medicinally in the past, taken as strong purgatives or applied externally for skin disorders. The flowers and ripe, cooked fruits are edible. (See Human Connections below.)

Some botanists consider our North American common elderberry as a variety of the European black elderberry, calling it S. nigra var. canadensis.

Elderberries (genus Sambucus), along with the viburnums, moschatels, and other members of the new family Adoxaceae, used to all be considered part of the honeysuckle family (Caprifoliaceae). The Caprifoliaceae still exists, but it is now a smaller group. This change reflects new knowledge of plants’ ancestries, and therefore degree of relatedness, based on DNA evidence, as well as similarities and differences in the forms of these plants.

Common elderberry has a long history of uses: for food, for medicine, and much more. There are several varieties and horticultural forms.

In the landscape, elderberries are hardy and offer large, showy flowerheads and berry clusters. They attract birds and butterflies. They form colonies by spreading via root suckers. Use them in rain gardens and low wet spots, as specimens, and as shrub borders, screens, and backgrounds.

Many parts of elderberry are toxic, but proper preparation may break down the toxins. It is best to work from proven recipes rather than experiment with the plant.

Native Americans used the fruits for food and medicinally, and they made a pleasant drink by dipping the flowers into hot water.

The berries are used to make pies, jellies, and wine. Many oldtime Missourians used to swear by the medicinal value of elderberry wine. Some commercial wineries today make “elderberry wine” by adding flavoring to grape wine; other wineries use genuine elderberries for their product.

Fresh elderberries have a bittersweet or tart flavor and should not be eaten raw, especially in large quantities. For use in pies, adding a bit of lemon juice or vinegar improves the flavor. Drying the berries is another way to improve their flavor; dried elderberries can be used in muffins, pancakes, cakes, chutneys, and more, much as you might use raisins or dried blueberries.

The flowers are used to flavor candies and jellies. They are also used to make herbal tea.

Wild edibles enthusiasts dip the entire flowerhead in a flower-and-egg batter and fry it as a fritter, snipping off the heavy stems once the fritter is in the skillet, and topping the fritter with powdered sugar once it’s done.

The tiny flowers can be rubbed off the flowerheads and mixed in with pancakes, waffles, or muffin batters, giving them an enticing flavor.

The dried leaves have been used as an insecticide and to keep mice away from garden plants.

A black dye can be made from the bark. The berries produce a magenta colorant that is used to alter the color of some other beverages and foods.

The woody stems, with the pith removed, once were used as drains in tapping maple sugar. Children have made flutes, whistles, and popguns from them. (Caution: the bark and twigs are poisonous, so they should not be chewed or sucked on or consumed.)

The leaves, young shoots, and buds have been known to poison livestock that graze on them.

The leaves have historically been used to treat sores and tumors. The berries, bark, and leaves have been and still are used as a laxative and diuretic. Elderberry is still used by modern herbalists, who use it to fight influenza, boost the immune system, relieve back, leg, and nerve pain, and treat hay fever and sinus pain.

This plant has considerable value as a wildlife food. The fruit is eaten by raccoons, squirrels, mice, and as many as 45 species of birds, including bobwhite and prairie-chicken. Deer browse the leaves, twigs, and fruit as well. Even box turtles have been known to eat the fruit.

It is possible for people to collect large quantities of elderberries in midsummer, but the fruits are rapidly gobbled up by birds if left on the shrub.

Elderberry is one of the few plants that can thrive under walnut trees, whose juglone chemicals suppress, stunt, or even kill many plants near them.

Many insects eat this plant, including the larvae of the large, spectacular cecropia moth. Other insects that eat elderberry including a variety of boring beetles, spider mites, and aphids. The larvae of mason bees, elderberry longhorn beetles, and elder borer moths grow up in the hollow stems.

Many insects collect pollen from elderberry, including bees, beetles, flies, butterflies, and moths. 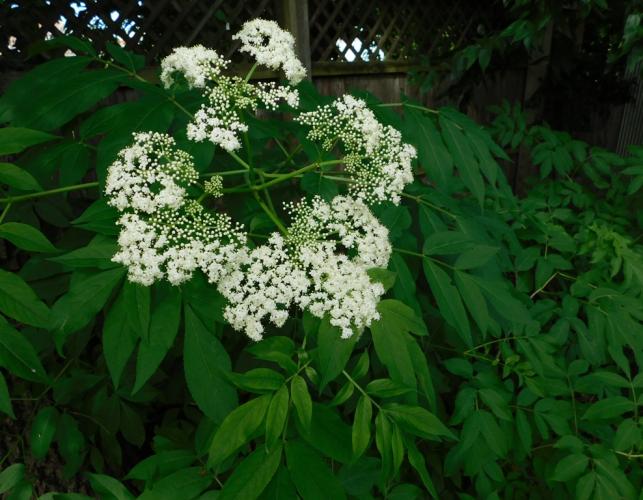 Caption
Common elderberry flowers from late May through July. The flowers are in conspicuous, large, flattened, dense clusters, sometimes up to 10 inches across, at the tip of twigs.
1/5
Image 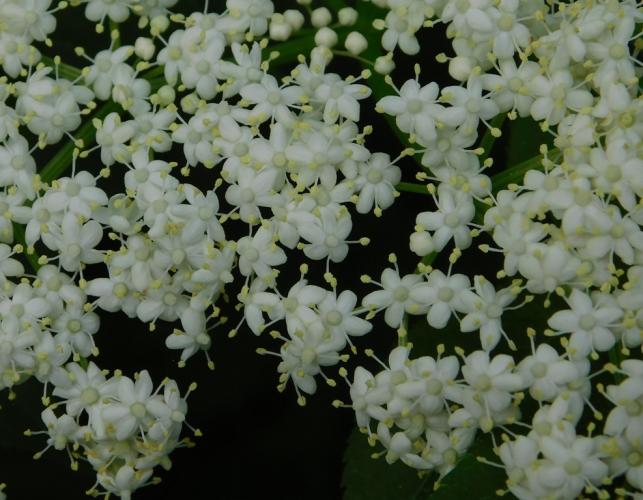 Caption
The flowers of common elderberry are white and sweet-scented; individual flowers are about ¼ inch across and have five petals.
2/5
Image 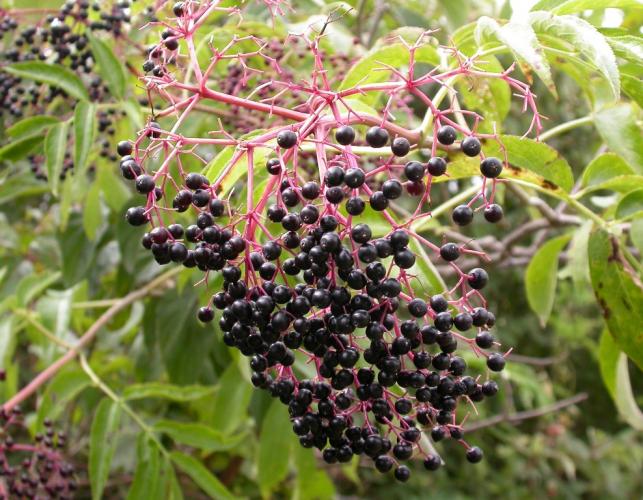 Caption
Fresh elderberries have a bittersweet or tart flavor and should not be eaten raw, especially in large quantities. Use proven recipes.
3/5
Image 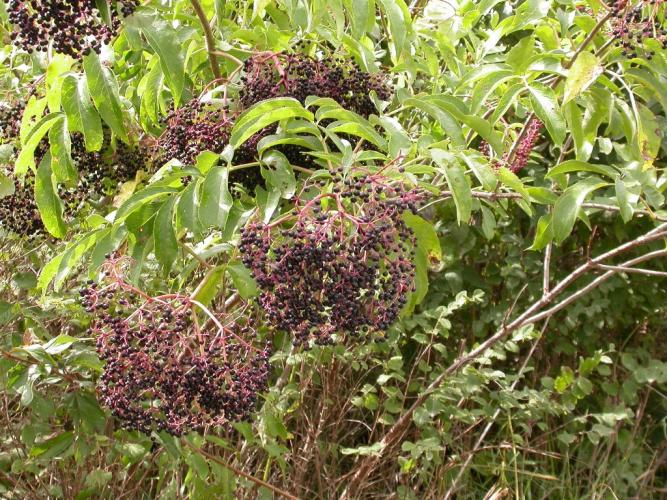 Caption
The fruits of common elderberry mature August–October. The fruits are berrylike, globe-shaped, purple or black, 4-seeded, about ¼ inch across, smooth, glossy, and bittersweet.
4/5
Image 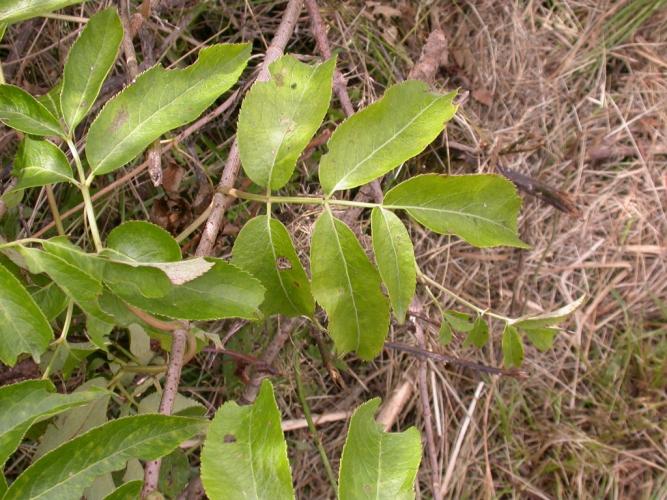 Caption
The leaves of common elderberry are opposite, compound, 4–12 inches long, and have with 5–7 leaflets. The leaflets are usually lance-shaped, and the margins are sharply toothed.
5/5
Image 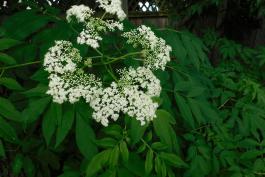 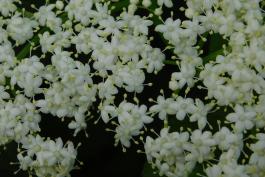 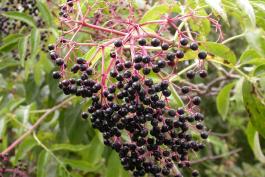 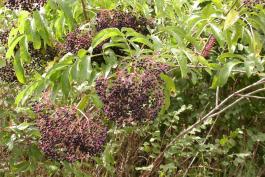 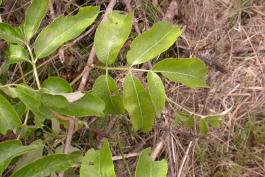 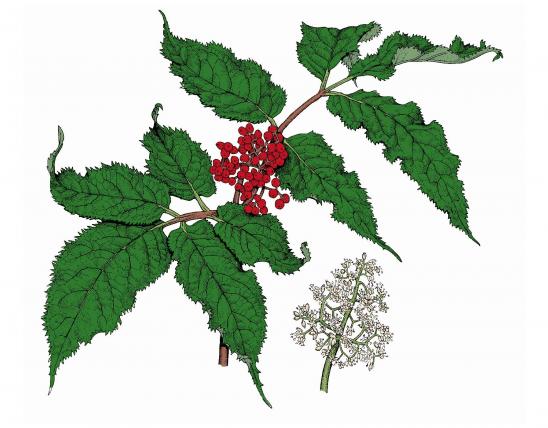 Red-Berried Elderberry
About Trees, Shrubs and Woody Vines in Missouri
There are no sharp dividing lines between trees, shrubs, and woody vines, or even between woody and nonwoody plants. “Wood” is a type of tissue made of cellulose and lignin that many plants develop as they mature — whether they are “woody” or not. Trees are woody plants over 13 feet tall with a single trunk. Shrubs are less than 13 feet tall, with multiple stems. Vines require support or else sprawl over the ground.