Huge herds of elk once grazed across most of Missouri. When the state was young, hunting laws didn’t exist. So as you might have guessed, by the late 1800s the Show-Me State’s last elk had disappeared into someone’s stew pot.

But the big browsers are back, baby! In 2011, biologists rounded up dozens of elk from Kentucky — with permission, of course — and turned them loose in a wild corner of the Ozarks called Peck Ranch.

The elk must have liked their new home. The herd doubled in size to over 200 elk, and it continues to grow bigger every year.

Male elk, called bulls, can tip the scales at over 800 pounds and stand taller — if you count their towering antlers — than a pro basketball player. Speaking of antlers: They can weigh 40 pounds all by themselves! To hold up their heavy headgear, bulls have a thick neck covered with a shaggy mane of fur. Female elk, called cows, weigh up to 500 pounds. And young elk, called calves, weigh about 35 pounds at birth.

Cows and calves live together for most of the year in herds of up to 50 members. After all, 50 sets of eyes are better than one for spotting danger! Bulls join the herds during mating season. Elk spend most of the day hiding in forests and glades but move into open areas at dawn and dusk.

In the fall, bulls let loose earsplitting squeals, called bugles. The calls can be heard half a mile away. They’re used to attract girlfriends and warn other bulls to get lost.

When an elk bugles, it actually makes two sounds at once: a low-pitched roar and a high-pitched whistle. To do this, it blows through its mouth and nose together — kind of like playing a trumpet and a kazoo at the same time.

Elk also grunt, bark, whine, and chuckle. When they walk, their front ankles make a clicking sound with every step. This “knuckle cracking” helps them keep track of each other at night or when they’re in a brushy forest.

Before mating season, bulls battle by using their spiky antlers to shove each other around. Usually, no one gets hurt. The weaker elk simply gives up and trots away, leaving the stronger, pushier bull to gather more girlfriends.

Here’s something else bulls do to attract females: They pee in a puddle and then roll around in it until they smell like urine. It sounds disgusting, but cows seem to find this pee-scented perfume quite charming.

To an elk, the world is one big salad bar. They graze on grass and other plants, pluck acorns from the ground with their nimble lips, and strip bark and leaves off trees.

The next time your tummy growls, think about an elk. When it gets hungry, it doesn’t have just one stomach to fill. It has four! The extra chambers help an elk get as many nutrients as possible from tough-to-digest plants.

Baby elk are born in late May or June. Each mama usually has only one calf. An hour after birth, newborns can stand on their skinny legs and take their first wobbly steps. They grow quickly by drinking mom’s milk.

Like most babies, calves need lots of rest. They curl into balls and snooze in tall grass or soft leaves. A calf’s spotty fur helps it blend in with the sun-dappled forest floor.

For the first few weeks, calves spend a lot of time alone. They’re nearly odorless, and they hide from predators by remaining silent and motionless. Mom, who is much bigger, louder, and smellier, stays away so she doesn’t lead coyotes, bobcats, and other elk-eaters to her little one. But she checks in several times a day to feed her hungry baby. After a couple weeks, the calf becomes much more mobile and can outrun many would-be predators.

If you want to see Missouri’s mightiest mammal for yourself, ask your parents to take you on the Peck Ranch driving tour. Your best chance to find a herd is right after sunrise or right before sunset. For a map of the route and other details — including when the tour is closed for deer hunting — hoof it to short.mdc.mo.gov/ZJJ. 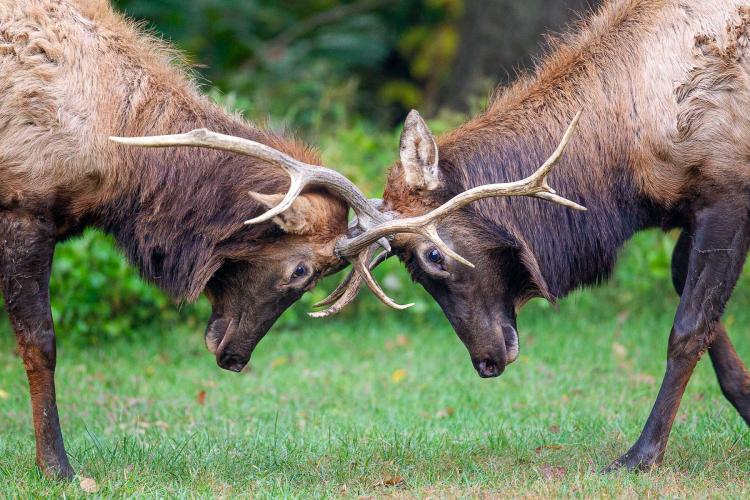 Credit
MDC
Right to Use
1/7
Image 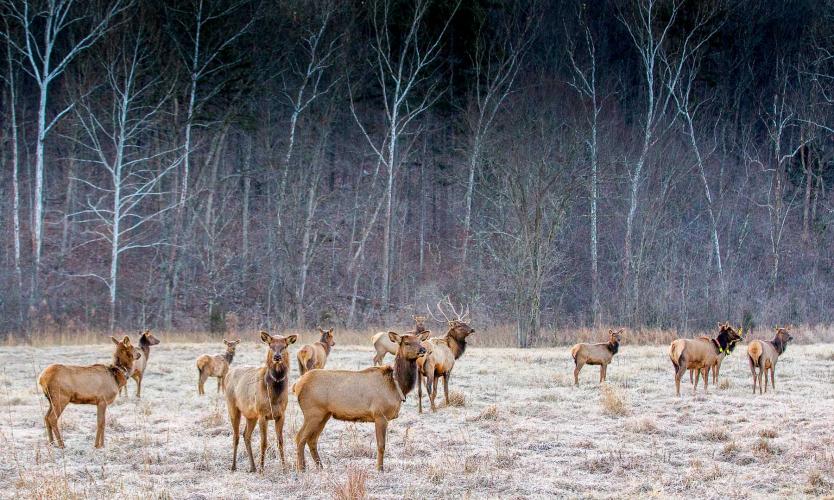 Credit
MDC
Right to Use
2/7
Image 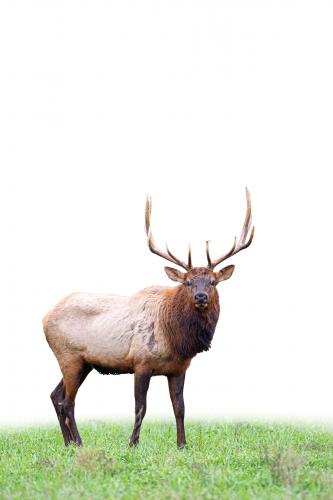 Credit
MDC
Right to Use
3/7
Image 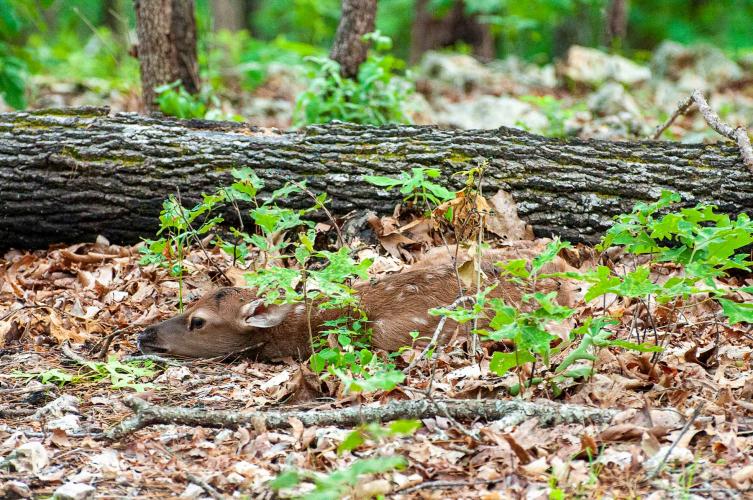 Credit
MDC
Right to Use
4/7
Image 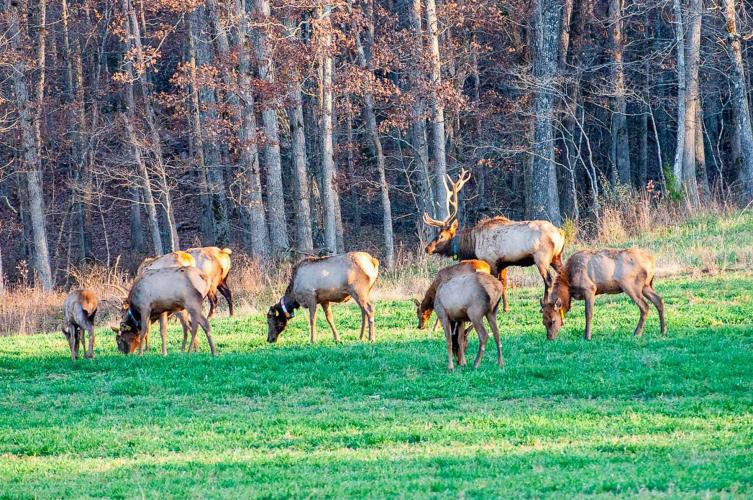 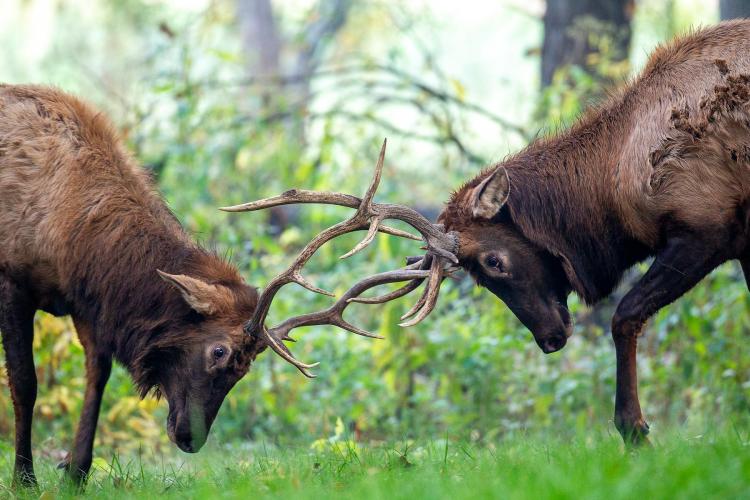 Credit
MDC
Right to Use
6/7
Image 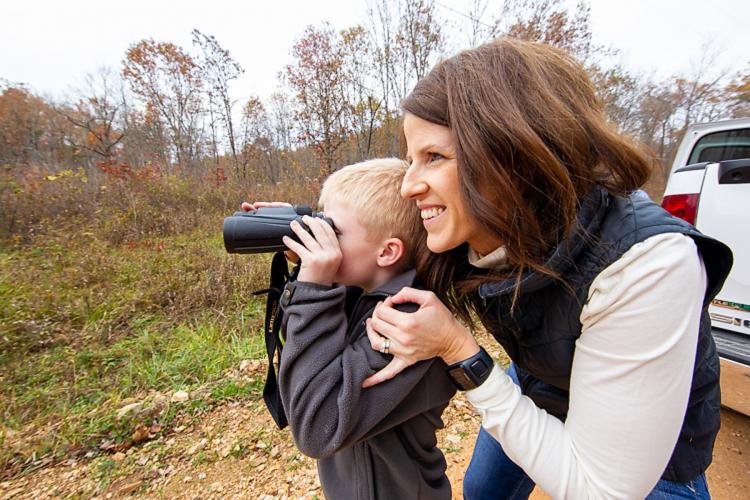 Credit
MDC
Right to Use
7/7
Image 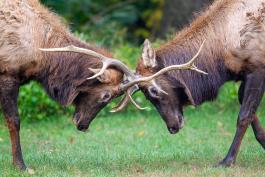 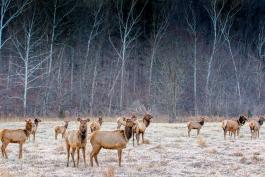 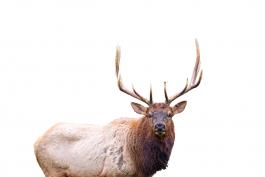 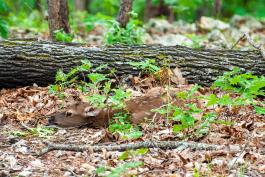 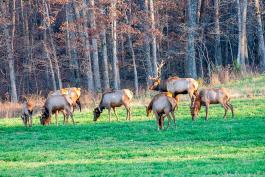 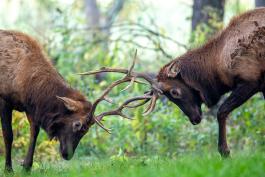 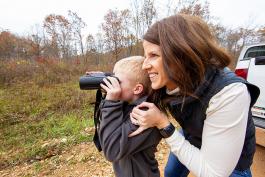 In winter, some animals power down to stay around

Critter Corner
Get Out!
How To: Make Homemade Granola Bars
Into the Wild: Cypress Swamp
Predator vs Prey - Cooper's Hawk vs Northern Cardinal
Strange but True
What is it?