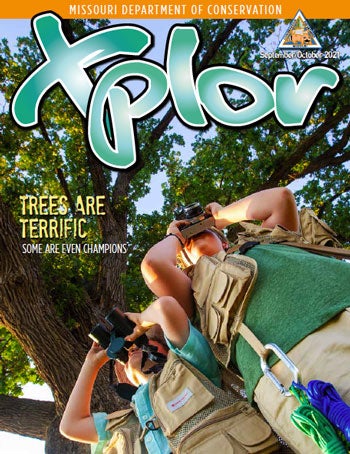 Despite having eight eyes, striped bark scorpions have terrible vision. To make up for poor peeper power, sensitive hairs on their pinchers help them feel the movements of prey, and organs on their undersides help detect odors.

Jack-o’-lantern mushrooms are well-named. Not only are they pumpkin-orange, but they also glow in the dark! The spooky, greenish-blue glow comes from the mushroom’s gills and can be seen only in pitch-black conditions.

Gray squirrels bury acorns to snack on later. But the nutty mammals often forget about most of the acorns they hide — in one study, 74 percent weren’t dug back up. Left underground long enough, the seeds sprout into baby oak trees.

Cave salamanders can “feel” the Earth’s magnetic field. This built-in compass helps the flame-orange amphibians find their way around the darkest corners of caves where there’s no light to help them see.

Standing nearly 3 feet tall and tipping the scales at up to 90 pounds, the American beaver is Missouri’s largest rodent. Our smallest rodent, the plains harvest mouse, is only 5 inches long (including its tail) and weighs less than 10 raisins.

Biologists believe that birds, especially those that fly nonstop for days during migration, take short naps in midair. But the soaring snorers aren’t likely on autopilot. A bird can leave half its brain wide awake while the other half rests.

Contrary to what cartoons might lead you to believe — beep, beep! — a coyote would have little trouble outrunning a roadrunner. The fleet-footed birds reach speeds of about 20 mph. Coyotes, on the other paw, can hit a howling 43 mph.

Your guide to all the unusual, unique, and unbelievable stuff that goes on in nature.

Have you got what it takes to bag big trees?

Attention, tree huggers! Leaf it to this field guide to help you get acquainted with your barky buddies.

Critter Corner
Get Out!
How To: Grow Milkweed
Into the Wild: Firewood Pile
Predator vs Prey - Rusty Spider Wasp Vs Wolf Spider
What Is It?