White-Tailed Deer and the Wild Places They Shape 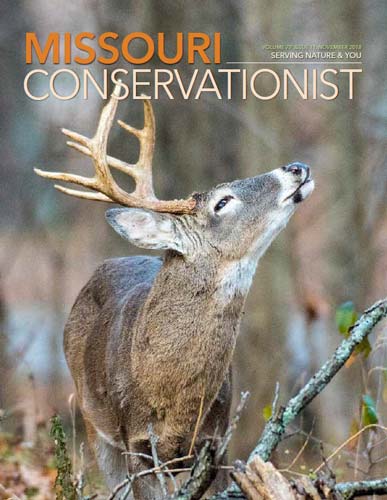 Many a mushroom seeker, hunter, or curious youth has walked into unfamiliar woods and encountered a bare-dirt trail. Often, they follow the path, pulled along by the trail’s open route, through brush, up a ridge, or across a creek. Turkeys, foxes, and turtles use these pathways, too.

People and creatures owe easier passage on such trails to white-tailed deer. Missouri’s most popular wild herbivore is a creature of habit, their hooves repeatedly pressing into soil and making paths along travel routes they find safe or easy for walking. “They create an infrastructure for anyone or anything,” said Joe DeBold, MDC urban wildlife biologist.

Deer help shape the wild places where they dwell in many other ways, too. A deer herd roaming a territory can influence species types and abundance — plants, trees, and animals — that people might see when they explore the outdoors. Deer are food for predators and scavengers. They provide nutrients for plants. Antlers shed by bucks in late winter are chewed on by field mice, which are preyed upon by owls. Deer are a keystone species, a species capable of profoundly affecting an ecosystem.

“They’re one of the key indicators we have to know that nature’s OK,” DeBold said. “If we were to not see deer any more in Missouri, things would be drastically wrong.”

In the early 1900s, the state’s deer numbers had dwindled to a small herd in the rugged southeastern Ozarks, survivors of over-hunting and habitat loss. Most Missourians never saw a deer or walked on a deer trail before voters authorized the Missouri Conservation Commission in 1936. MDC’s science-based conservation efforts, along with citizen support, helped restore deer statewide. Today, whitetails are once again contributors to nature’s life cycles in nearly every Missouri ecosystem. “Probably the biggest thing they do is browsing,” said Barb Keller, MDC cervid program supervisor.

As they browse for food, deer can subtly or profoundly affect plant and tree species within a natural community. They are the largest wild herbivore that roams statewide, and in some seasons and locations, they feed together as a herd. They prefer native plants, and they selectively browse plants and nutritious twigs or stems. They can reduce dominance by certain plant species, giving other plants a chance to grow. Plant diversity increases insect diversity, including pollinators, and insects are crucial food for birds and other wildlife.

“Quite a bit of research shows if done at the right level, their browsing creates more plant diversity in a natural community,” Keller said.

Deer promote plant diversity by spreading seeds. Undigested seeds in droppings can sprout in new places, and the feces provide fertility to boost growth. Plant seeds can stick to deer fur and be carried to new locations. Tick-trefoil provides great forage for deer, Keller said, and its seeds can stick to deer fur and ride to new places, perhaps scraped off on grasses as a deer beds down for the night.

Too many deer in an area can cause less diversity. Desirable native plants can be greatly reduced or eliminated from the ground cover. Deer also feed on buds and tender, moist limbs of shrubs and trees. In harsh winters, they will eat bark. That can set back the growth of young trees, such as oaks, needed for forest regeneration. In areas with overabundant deer, browse lines are sometimes visible where all understory plants and low limbs have been eaten in an area. This occurs most often in urban areas where predators are fewer and hunting opportunities are limited, letting herd numbers grow.

Keeping natural communities healthy with diverse plant life is one reason why it is important to keep deer numbers in balance with the carrying capacity of their habitat. Hunting is one of the main tools to control deer numbers. Hunters gain food, trophy antlers, and outdoor adventure. Special managed deer hunts in urban areas, like Kansas City’s Rocky Point Glades in Swope Park, have helped bring deer numbers into balance in some locations, DeBold said.

Deer are also food for furbearing predators. Young fawns in spring and early summer often fall prey to bobcats, foxes, black bears, or coyotes. Predators can also sense weak or diseased deer and remove them from the herd, boosting deer herd health, DeBold said. Those predators and their health are important for the ecosystem, as they keep other species, such as rodents — field mice and wood rats — in balance.

Scavengers, such as turkey buzzards, bald eagles, crows, and carrion beetles, will feed on dead deer carcasses. Some fawns are stillborn or die soon after birth. Adult deer die due to age, disease, or accidents. They become important meals for scavengers.

Deer prove the axiom that nothing is wasted in nature. Buck deer shed their antlers in late winter. Mice and squirrels, being rodents, need something hard to chew on to wear down their teeth, so from the time of antler shedding in late winter they gnaw on antlers.

“From that they get calcium, and calcium makes them more nutritious for the creatures that eat them like hawks, owls, and foxes,” DeBold said.

The areas where deer affect ecology can be large or small. Deer can survive in small pockets of habitat in urban areas, but in rural areas they will move over wider ranges.

MDC biologists, in cooperation with the University of Missouri, are studying deer habits and survival in northwest Missouri and in the central Ozarks. They are trapping deer, outfitting them with GPS collars that communicate with satellites, and downloading data about their movements.

“There’s a lot of individuality in every deer that’s out there,” said Kevyn Wiskirchen, MDC private lands deer biologist.

In general, however, a buck deer will roam over 600 to 800 acres, Wiskirchen said. A doe will use 300 to 400 acres. At times deer are moving in herds. During fall rut, deer are moving more as individuals and at times will travel farther than usual through timber and fields.

“But within each home range, there will be a smaller core area where they spend most of their time near preferred bedding sites and high quality forage,” he said. “Deer prefer edge-type habitats where there’s the greatest amount of diversity. They look for certain plants and plant parts as forage. They like newer growth that’s easier to digest. Even in a closed canopy forest, they’ll look for a place where a tree has fallen over and unusual plants have sprung up. They really like that diversity.”

In the large forests in the Ozarks, soft mast such as berries and hard mast such as acorns are critical foods to deer to help them prepare for winter. Mast feeds many other animals, too. Balance of deer numbers is important to ensure plants, shrubs, and trees that provide mast grow sustainably, including young oaks. “If the deer population is balanced and equal with habitat so carrying capacity is balanced, deer will help keep everything around them balanced as well,” DeBold said.

Missouri’s white-tailed deer herd is healthy when viewed on a statewide basis, said Barb Keller, MDC cervid program manager. But disease is a factor for deer numbers in local areas.

In 2012, dry conditions worsened a broad outbreak of hemorrhagic disease, a virus disease carried by a midge fly. When drought concentrates deer around water sources, disease transmission chances are increased.

“The 2012 outbreak hit the entire state hard,” Keller said. “The north Missouri population was hit particularly hard. That population is more vulnerable.” Hemorrhagic disease, also called bluetongue, is more common in southern Missouri. Deer there have built up more antibodies and resistance to the disease. North Missouri deer contract the virus less frequently, thus they have less resistance when it arrives. Deer populations in some areas of the state have rebounded to pre-2012 numbers, Keller said. But in many northwest Missouri neighborhoods, deer numbers are still down, which might also be due to habitat losses.

MDC is battling chronic wasting disease (CWD) in partnership with hunters and landowners. The fatal disease, associated with misshapen proteins called prions, is contagious and affects deer and other cervids. It causes brain damage and is progressive.

Mandatory testing in some counties with confirmed cases and culling deer near hotspots to reduce transmission chances appears to have helped limit the disease. During late 2017 and early 2018, MDC tested 24,500 deer for CWD and found 33 new cases. That brought the total number of cases to 75 since 2001, when the first case was discovered in northeast Missouri.

“We’re lucky in that I don’t think CWD has had a significant effect on our state’s overall population,” Keller said. “We have CWD in a wide geographical area. But so far we’ve seen the prevalence to be low.”

A healthy deer herd is important to Missouri. Deer hunting is a treasured family tradition. Hunters move a billion dollars through the state’s economy. Wildlife watchers value deer, and deer are an important component in natural ecological systems. 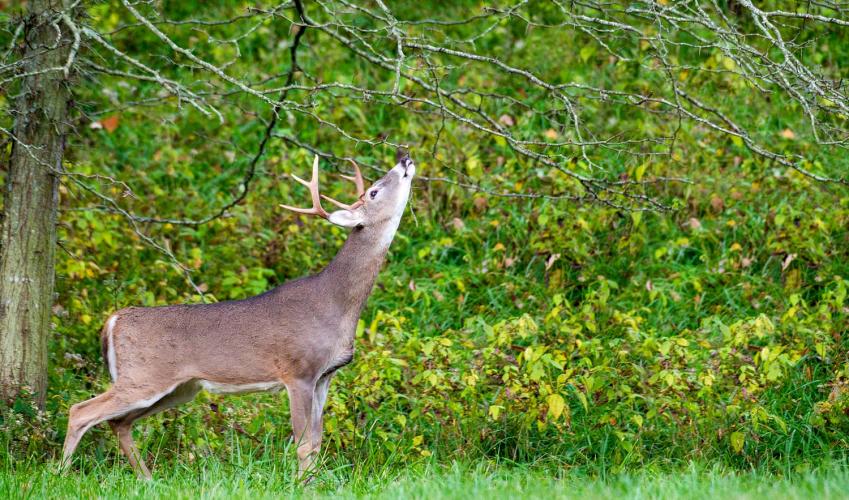 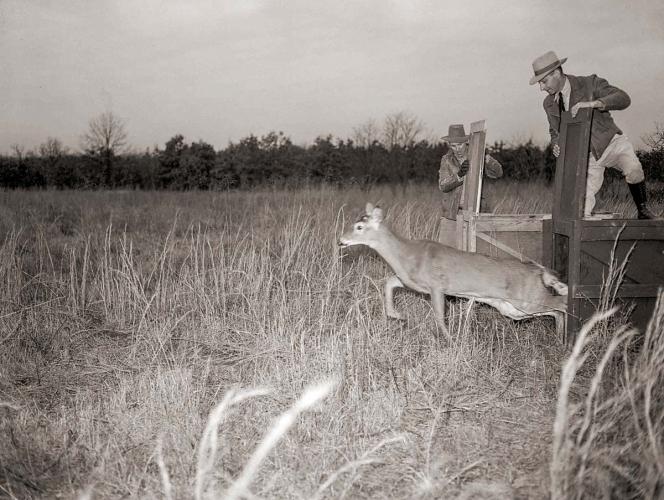 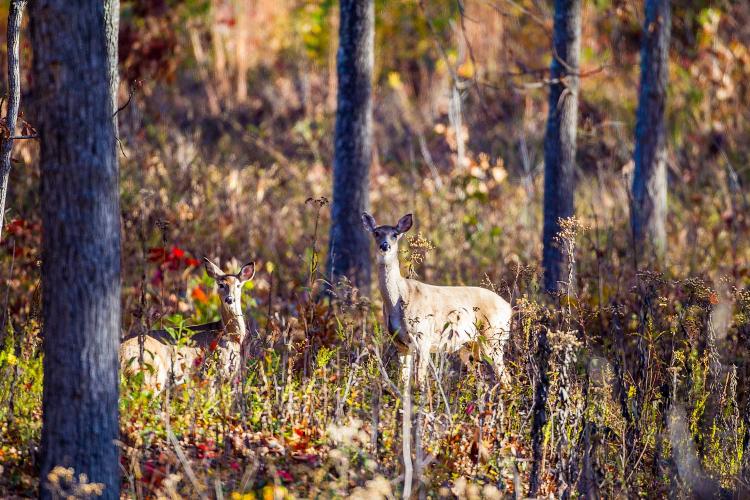 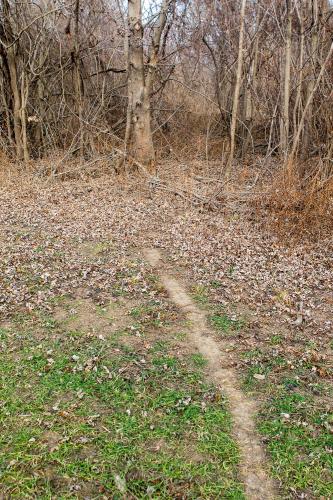 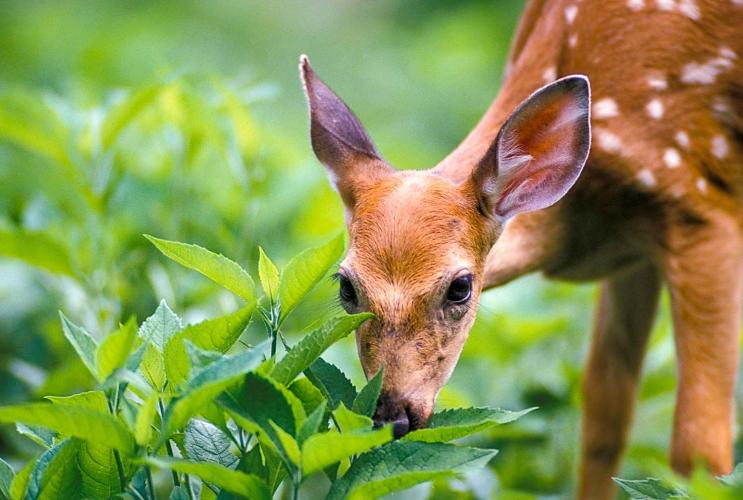 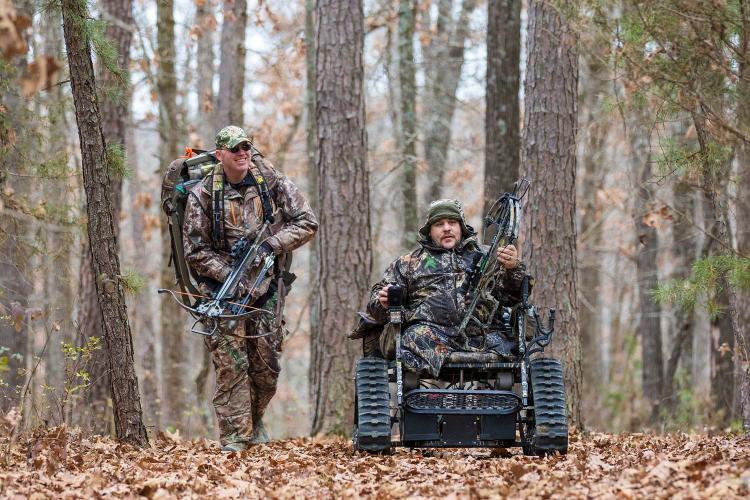 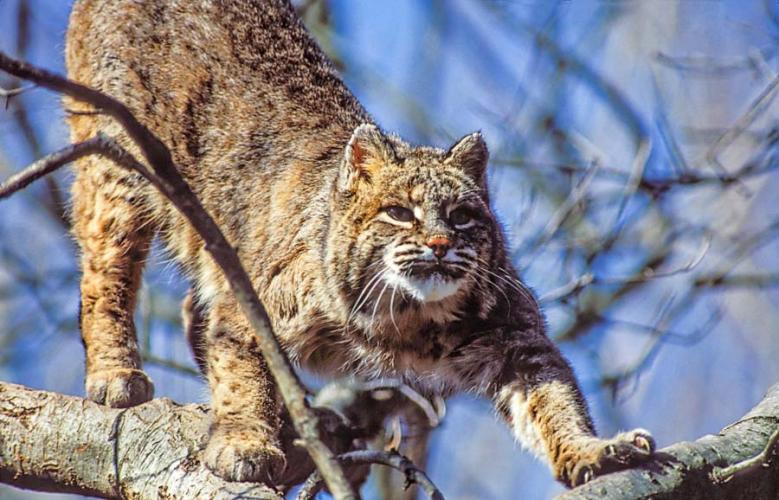 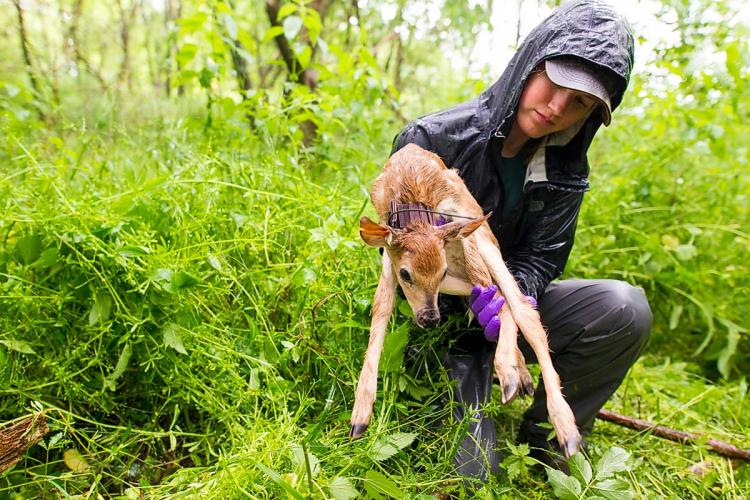 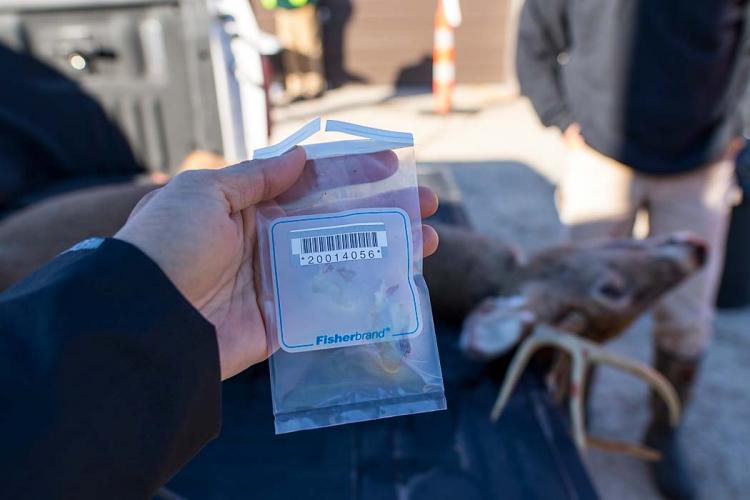 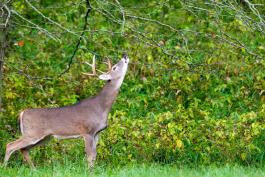 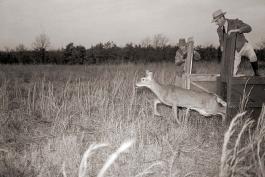 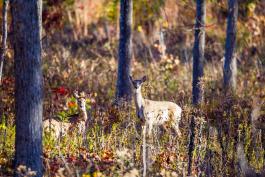 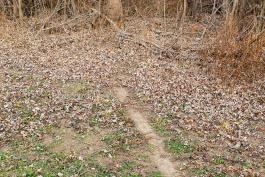 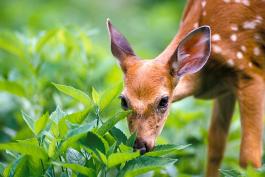 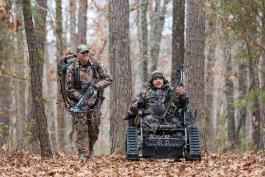 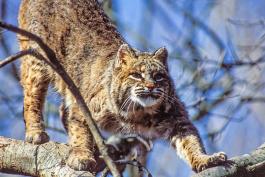 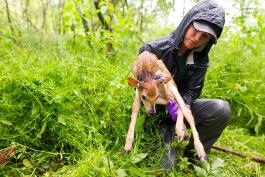 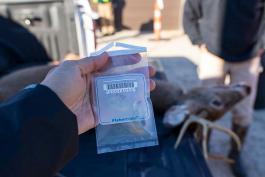 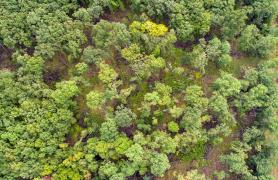 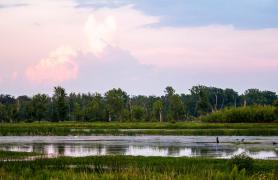