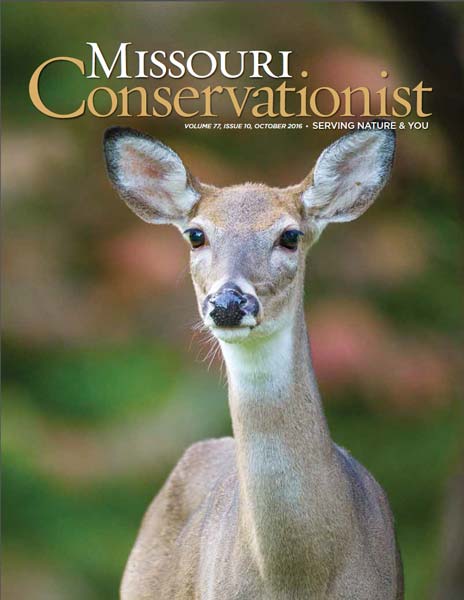 Our photographers have been busy exploring the intricacies of outdoor Missouri. See if you can guess this month’s natural wonder.

Q. I’m looking forward to seeing dark-eyed juncos once again. When can I expect them to arrive?

A. Juncos typically arrive from Canada and Alaska during the last week of October.

They breed in northern coniferous and mixed-coniferous forests, but they migrate south when temperatures turn cold. These ubiquitous, abundant birds form ground-foraging winter flocks. Commonly called “snowbirds,” juncos are often found in suburbs, especially at feeders. They also congregate at the edges of parks, around farms, and near rural roadsides and streams. They prefer to eat seeds and arthropods, such as insects, spiders, millipedes, and crustaceans.

Juncos look a bit different from region to region, but two color variations are typical throughout Missouri during the winter. The most common is the slate-colored junco. It is light- to dark-gray all over, except for its belly and the two to three white outermost feathers on each side of the tail. The less common Oregon junco appears in the northernmost counties. Its back is a red-brown and its sides are rusty to pink. The brown sharply contrasts with the black or gray of the head and chest, giving the appearance of a hood.

If you see a sudden flash of white and dark tail feathers darting toward a bush, you may be seeing a junco.

Due to their regional differences, juncos have been a bit of a taxonomic nightmare for scientists. As recently as the 1970s, dark-eyed juncos were split into five distinct species. They have subsequently been combined.

Although they are common, they are still beloved. Their arrival in early winter heralds the change of the season, and watching their energetic feeding takes the edge off chilly days.

Q. Why is this bullfrog blue? We have lived here for 15 years and this is the first time we have seen this.

A. Two color pigments — blue and yellow — are needed to produce the normal green coloration of a frog. In a bluish animal, the yellow pigment is not present, possibly due to a mutation, thus giving the frog its unusual appearance.

However, it’s also possible the frog has chytridiomycosis, an infectious disease caused by the amphibian chytrid fungus. By affecting the keratin layers of the skin, the fungus compels the frog to shed its skin more quickly in an effort to rid itself of the disease. The raised, loose skin can give the animal a blue-gray appearance.

Bullfrogs are found across the state of Missouri. They spend most of their time in aquatic habitats and are active from March to October. But don’t expect to see them much longer. They begin hibernating around Halloween.

When most people think about firearms turkey hunting, they think about early mornings, gobbles off the roost, and the first sounds of spring in the air.

Oct. 1 marks another opportunity for firearms hunters to harvest a turkey. Fall turkey hunting is somewhat of a forgotten season because many hunters are either archery deer hunting or preparing for the firearms deer season. Don’t let October pass you by without participating in a challenging, yet rewarding, turkey season. The action may not be as fast-paced and intense, but if you are looking for an opportunity to enjoy the outdoors and another chance to harvest a turkey with a firearm, October is the month for you.

The fall season rules are different from spring season rules. Make sure the county you are hunting in has a fall firearms portion. Shooting hours are one-half hour before sunrise to sunset. Two turkeys of either sex may be harvested, and both may be taken on the same day. Fall firearms turkey season is Oct. 1–31, 2016.

Take advantage of this chance to get outdoors and enjoy another rewarding season in Missouri.

Travis Goreham is the conservation agent for Jackson County. If you would like to contact the agent for your county, phone your regional conservation office.

Araneus marmoreus
The marbled orb weaver is a colorful spider whose wide range includes all of the eastern United States. It’s sometimes called “pumpkin spider” because the rounded abdomen of this species can be bright orange. The pattern is variable, and the color can be white, yellow, or orange, with mottling and spotting of black, brown, or purple. Females build their wheel-shaped webs among trees and tall weeds in moist woods, often near streams. —photograph by Noppadol Paothong