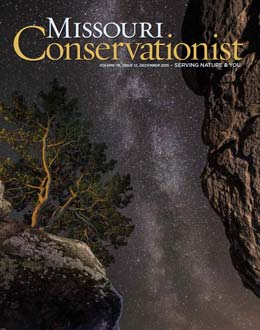 Science confirms many animals, from warblers to seals to dung beetles, rely on the stars to find their way. They surely learned the trick long before humans did. The movements of the sun, moon, and stars form cycles we and other living things use to keep time every day.

I have been fascinated with the wonder of the night sky ever since I can remember. Looking up at the infinite sparkles in a truly dark sky never ceases to captivate me. Each speck of light is a distant sun, like our own. Ancient people spent countless nights marveling at these lights. They used their imaginations to connect the celestial dots to create patterns of mythical figures and everyday things. These became the basis of the constellations we still recognize today.

As you become more familiar with the night sky, you will notice that the star patterns move during the night and through the year with the predictability and precision of a Swiss watch. Starlight travels at a finite speed, about 180,000 miles per second or 6 trillion miles per year. That may seem fast, but due to the vast distances in the universe, the light reaching our eyes could have started on its way four years, or thousands of years, before. When we look at the stars, we are looking back in time.

You can come to depend on the stars’ movement to mark the changing seasons just as the ancients did. The prominent constellation Orion riding high in the southern sky signals the coming of winter as much as the first snow. Leo the Lion heralds in spring right along with the first flowers on the forest floor. The Milky Way shimmering overhead speaks to the warm nights of summer as decidedly as the calls of the crickets and katydids. And the Great Square of Pegasus always presides over autumn’s changing colors.

Conservation areas located away from city lights can be excellent venues for stargazing. Many are open until 10 p.m., and it may be possible to contact an area manager to obtain a special use permit for nighttime viewing during other times.

Appreciating the stars and night sky doesn’t require expensive equipment. A blanket or sleeping bag spread on the ground can be a nice viewing location. A reclining outdoor lounge or camping chair is another option if you prefer to do your viewing off the ground. A pair of binoculars — perhaps ones you may already own — can offer a wondrous window on the universe. An ideal pair would be in the 7X50 or 10X50 range, but almost any will offer an enhanced view and allow you to see more stars than the naked eye.

A planisphere is an excellent tool to aid in learning the stars and constellations. This simple device consists of a rotating dial used to set the time and date, and the stars are displayed and identified on a disk roughly as you would see them in the sky. There are also a number of smartphone apps that offer a graphic display of the stars in real time.

When heading out to enjoy nature at night, always remember to dress in plenty of layers on cooler nights, prepared for at least 10 degrees cooler than the forecasted low. Hat, gloves, and warm socks are also important. Be sure to give some time for your eyes to become adjusted to the dark. Using a red flashlight — either a red LED or a standard flashlight covered with red electrical tape — will help preserve your night vision.

And while you’re out discovering the stars, why not explore the natural elements around you? The darkness makes one more attune to the howl of a coyote in the distance, the rustle of opossums skittering in the woods nearby, or the raucous calls of a pair of barred owls. The Missouri evening primrose opens its yellow petals after the sun goes down, welcoming a multitude of night-flying moths. There’s really a lot happening in nature when we humans are usually sleeping.

The next time you want to experience Missouri outdoors in a different way, consider spending some time under the stars. Nature doesn’t go to sleep after the sunsets. And you may find it gets even more interesting.

Photographing night scenes is best done with a digital single-lens reflex (DSLR) and a tripod because of the long exposures. To photograph a basic star field, using a shutter speed of 20–30 seconds, ISO 1600 at f/3.5–2.8 will do the trick. For a detailed shot of the Milky Way, use an f/2.8 lens and ISO 3200.

Star trails require stacking multiple exposures, usually 30–60 seconds each, taken continuously over several minutes or hours. A programmable remote timer makes this possible. The individual images are stacked later with software to create the continuous streaks as the stars move over time. Pointing toward Polaris, the northstar, creates the concentric circles.

I often shoot my scenes in layers. I begin with the “base” layer, which is usually the sky component using the methods above. I then set my camera to a lower ISO, smaller aperture for depth of field, and refocus on the foreground. I shoot a series of images and use various lighting tools to individually “paint” different portions of the scene. Afterward all these layers are blended together in Photoshop to create the final image.

Although many of my images are assembled after shooting, everything you see was really there — nothing other than light has been added. Creating images this way allows me to capture each element at its best exposure and focus. 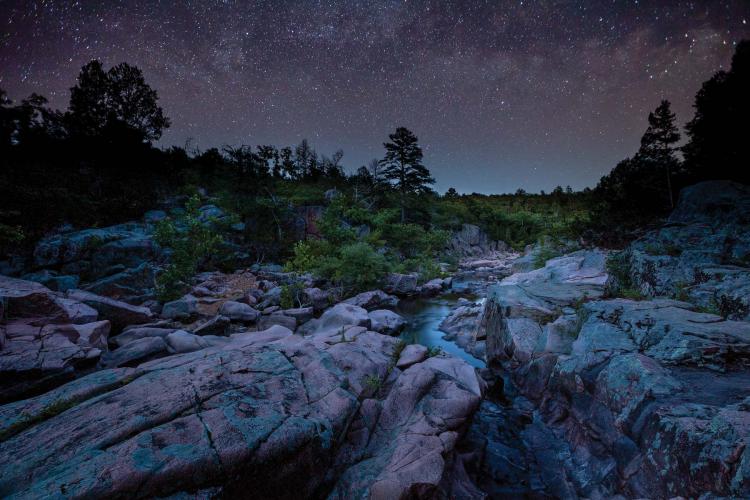 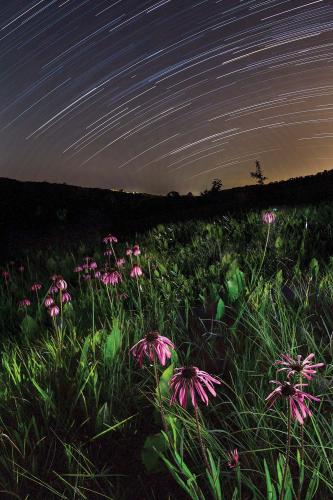 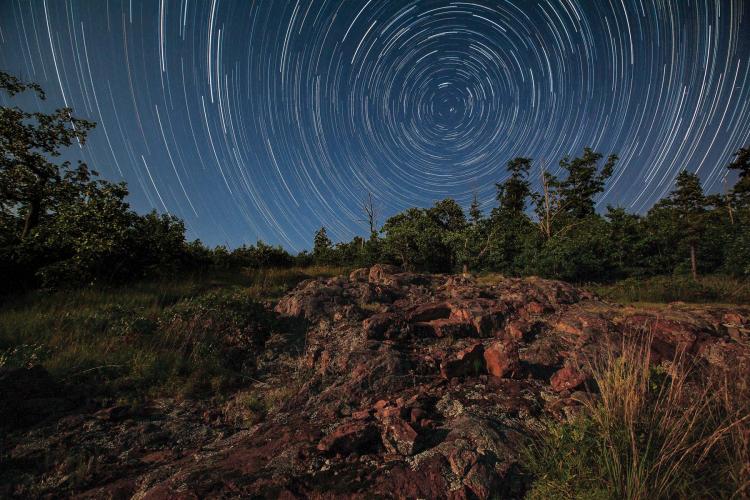 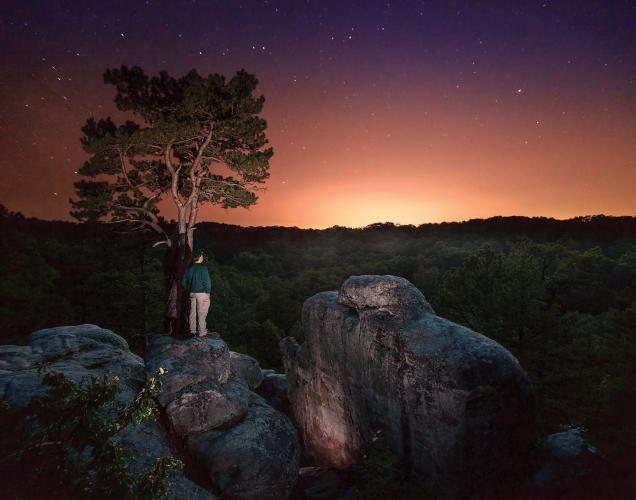 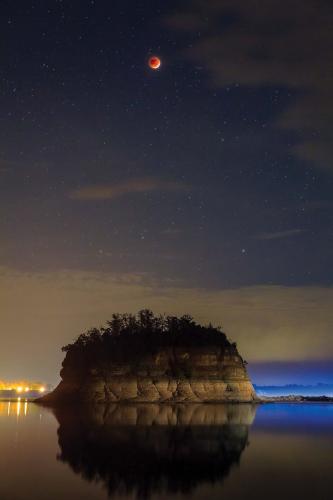 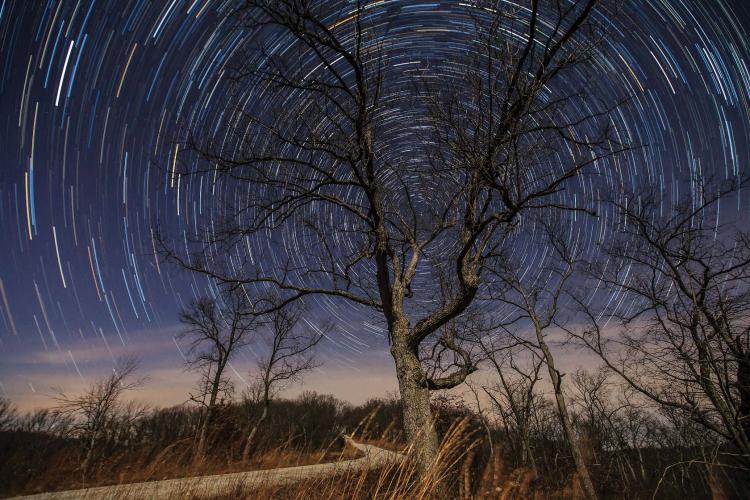 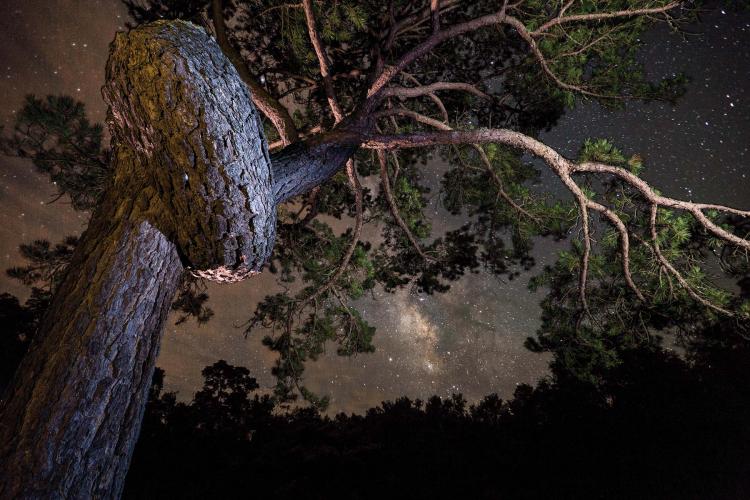 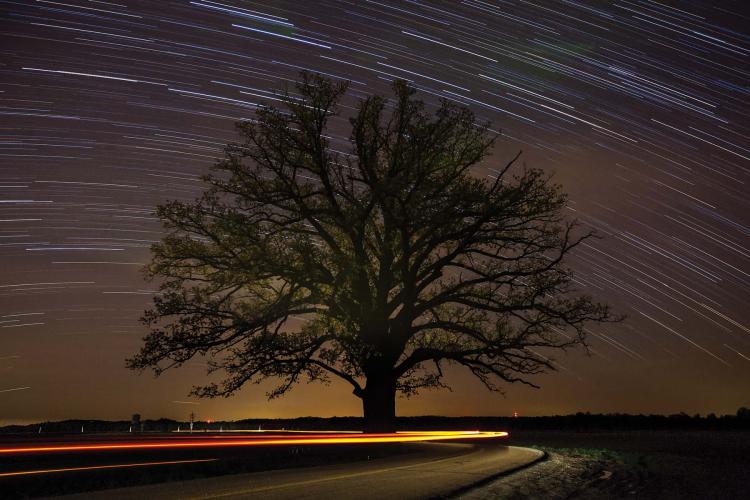 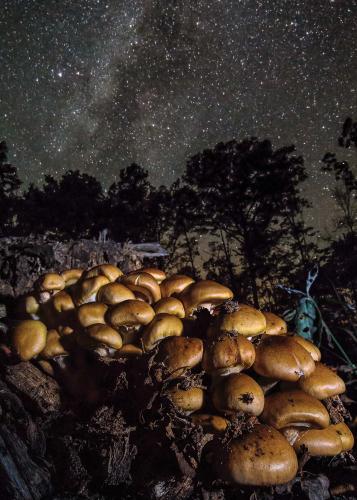 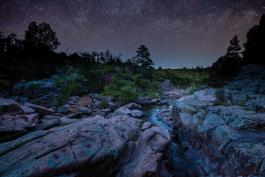 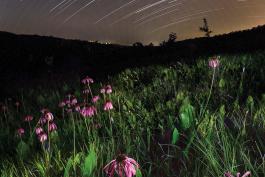 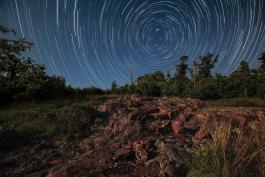 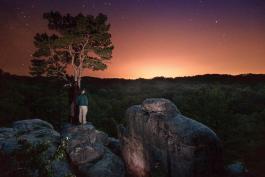 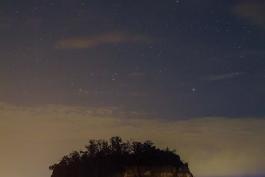 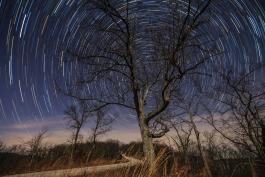 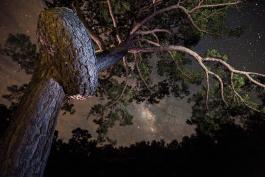 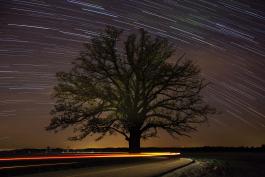 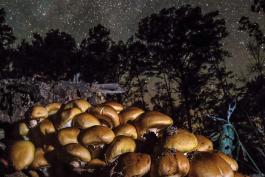