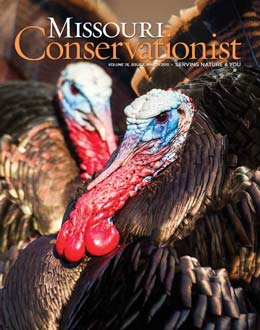 In particular, it’s the interaction between hunter and turkey that brings many back to the timber each season. However, wild turkey communication is complex, with many different kinds of vocalizations and extensive body language. Hunters can increase their chances of success if they have a complete understanding of how and why turkeys communicate. Let’s review the basics.

Wild turkeys have a well-developed communication system that plays an important role in their lives. From avoiding danger to mating, turkeys depend on communication to survive.

Turkeys use two main forms of communication: vocal and visual. Turkeys often use both methods at the same time. For example, a tom may gobble while also strutting and posturing (the act of spreading its tail fan, dragging its wings, and making its body appear larger) for attraction and dominance. During this display, the gobbler is making his presence known vocally by gobbling and visually by displaying.

Wild turkeys produce over 20 different types of vocalizations and other sounds (see Turkey Talk Dictionary sidebar for the most common). These calls help birds signal danger, establish social status, and attract a mate. Both gobblers and hens make vocalizations throughout the year. For alarm, all turkeys will “putt.” Biologists and hunters think this call warns offending hunters or predators the turkey has spotted them and their efforts to surprise the bird are over. In addition, this alerts other turkeys within hearing distance to the danger.

Both gobblers and hens make vocalizations throughout the year. Hens will communicate with gobblers by tree calling, yelping, cackling, and cutting.

To establish social status, turkeys need other birds around them. However, their flocking nature changes throughout the year. For example, in the fall and winter, it is common for gobblers and hens to break into separate flocks. But as spring unfolds, breeding flocks become more common, with a mix of gobblers and hens. Much of the social status within the flock is established through calling and displaying. Both gobblers and hens will fight for rank within the pecking order while making a number of vocalizations. Establishing dominance helps gobblers, in particular, transition into spring, the mating season, with ease.

The turkey’s spring mating ritual and the accompanying sounds and behaviors are well documented. Gobblers are polygamous and will mate with several hens throughout the season. Usually around mid-March, the first gobbles can be heard at daylight. Toms will typically fly down, stand on a ridge, gobble, strut, and spit and drum in the hopes of attracting a hen. Many times, gobbling subsides after fly-down, and toms switch almost entirely to strutting with spitting and drumming. Humans can hear this unique sound only a short distance, usually less than 75 yards. Hens will communicate frequently with gobblers by tree calling, yelping, cackling, and cutting and by coming to the vocal communication offered by toms. This ritual continues through the end of May and overlaps with our spring turkey-hunting season.

Although we think of turkeys gobbling and yelping to communicate, they don’t always make noise to send a message. Wild turkeys frequently use body language and behavior — strutting is an example. In addition to strutting, turkeys also exhibit other posturing to help maintain social structure within a flock.

As turkeys approach your setup, pay attention to the birds’ body language. A relaxed tom will exhibit normal walking behavior, may strut, and will usually have a relaxed or drooping snood. Stiff walking, high-stretched neck and head, putting, and a shortened snood can be signs of an alert turkey that may be aware of your or another hunter’s location.

Learn the Lingo, Master the Methods

Although turkeys have an extensive vocabulary, you should concentrate on mastering the two most common calls: the yelp and cluck.

Learn how to make the calls and, more importantly, when to make them. Practice these calls on a device that is simple and easy to operate until you can produce the sounds with ease.

There are a number of calling devices designed to lure a gobbler into range. The two main types are friction and air blown.

Wild turkeys use a variety of behaviors and appearances to signal their sex, age, mood, or intention. Get to know their most common behaviors and physical features.

Every turkey hunt will bring about different scenarios. Here are three of the most common.

Situation: It is 6 a.m. and there are two toms gobbling routinely about 100 yards ahead in the timber. You also hear hens calling farther away and fear the hens will drag the gobblers away. Your soft calls have the gobblers gobbling; however, they have stood their ground. How do you call in one of the toms for a shot?

Technique: Challenge the talkative hens by mimicking their calls and topping it with more aggressive cutting and yelping. Use different calling devices to convince the flock you are more than one bird. Add realism by mixing in clucks and purrs with leaf scratching. Expect the hens to come in and drag the gobblers with them. Wait 15 to 20 minutes before trying another tactic.

Situation: Your scouting has confirmed a gobbler typically flies down and struts in a log landing and remains there until midmorning. You have eased in and now you are sitting on the edge of that log landing with a single hen decoy positioned 20 yards in front of you. It is 5:45 a.m. and the tom gobbled for the first time 100 yards to your right.

Technique: Start by offering soft tree yelps to let the gobbler know you are there. He will likely gobble back eagerly. Wait for him to fly down and then offer a short series of excited cutts and yelps, and then go silent. Keep your firearm pointed in the direction of his gobbles. Listen for spitting and drumming as he approaches.

Situation: It is 7 a.m. and you are hunting a large field where gobblers routinely strut. You have heard little gobbling, and nothing is close. What calls might you try to attract a tom?

Technique: Offer short series of soft yelps, clucks, and purrs every 20 to 30 minutes. Don’t be surprised if a gobbler shows up unannounced.

Calling up a love-crazed gobbler can be one of the most fulfilling experiences for any hunter. However, for calling to be effective, it must be used in combination with other strategies such as woodsmanship, decoys, and solid setups. For many hunters, it takes experience to understand how to apply the language of wild birds. Study up on how turkeys communicate, apply that knowledge appropriately, and you will be well on your way to notching your tag this spring.

Every turkey will respond differently to communication techniques. Use these guidelines for success.

Wild turkeys produce a number of vocalizations and sounds. Become familiar with the most basic

(for recordings and more information on turkey vocalizations visit mdc.mo.gov/node/29704). 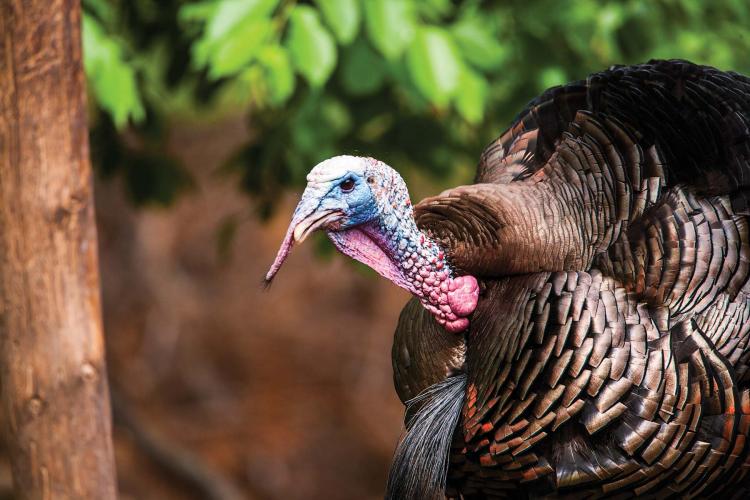 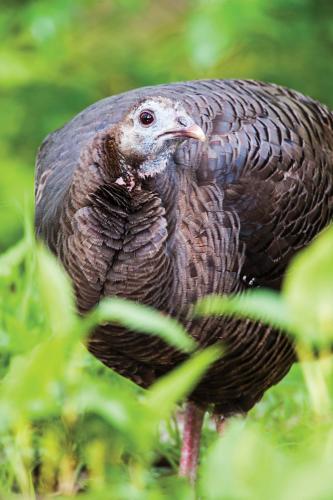 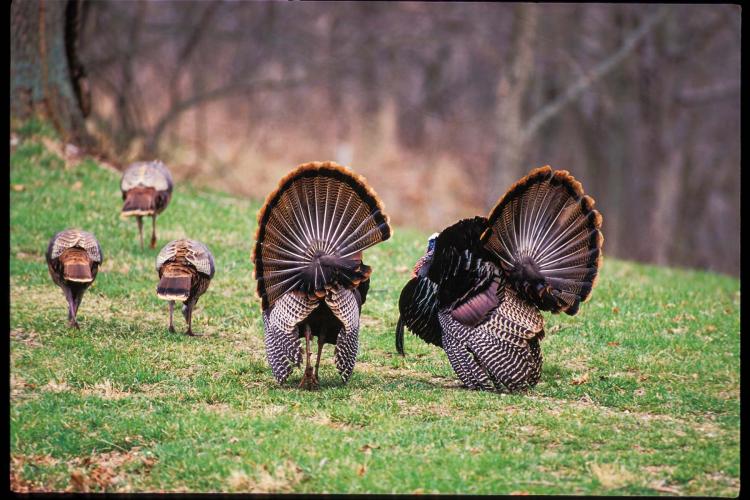 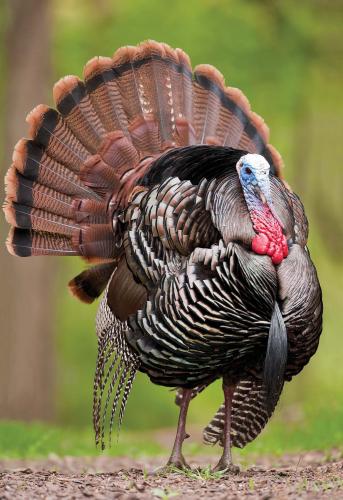 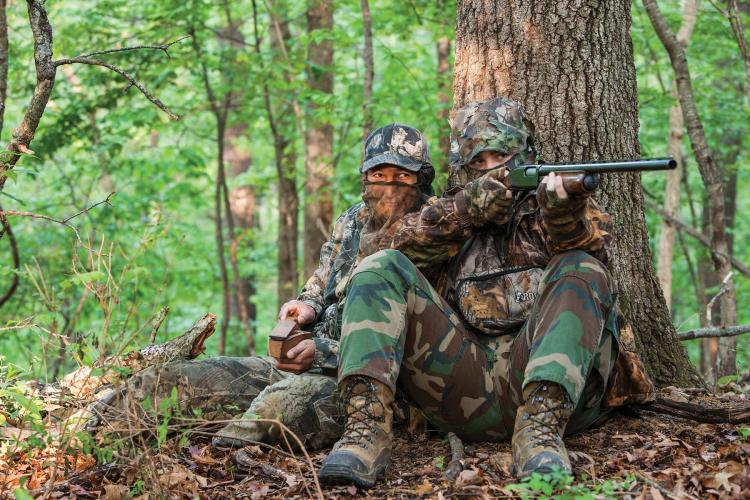 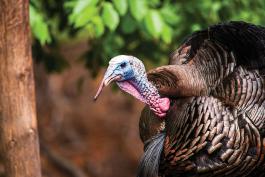 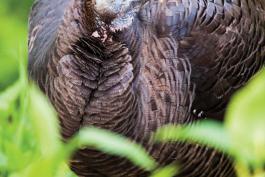 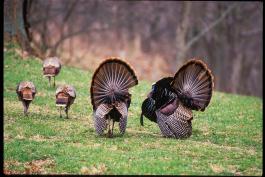 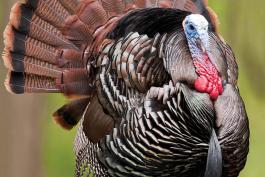 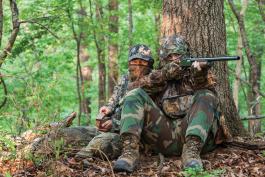