A Win-Win for Prairie Chickens and Ranchers 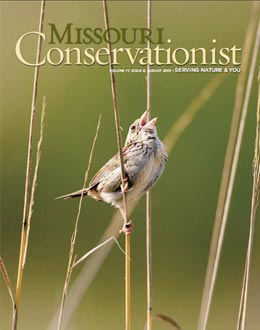 One bright, windy morning last March, Dade County rancher John Kremp and his nephew, Jonathan, unloaded 100 cows and their calves onto a half-section of native prairie. The gates clanged, the calves bawled, and the boss cow led the herd into new grass. The scene looked and sounded like an ordinary day on the ranch.

John's delivery, however, was anything but ordinary. He was keeping his end of a special partnership designed to double Stony Point Prairie Conservation Area’s acres of prime prairie-chicken habitat.

The history of this partnership begins with the birds. Before European settlement, native grasslands covered nearly half of Missouri, and prairie-chickens numbered in the hundreds of thousands. When settlers arrived, they hunted the chickens for food and trade, and eventually farms and towns replaced most of the prairie. By 1906, the birds’ population in Missouri was too small to support a hunting season. Today, fewer than 500 birds scattered in isolated flocks remain in Missouri, and the prairie-chicken is listed as endangered in the state.

Although prairie-chickens continue to thrive in some parts of their historic range, such as Kansas and Nebraska, they do so only where the habitat suits them. Suitable habitat has very few trees, which provide hunting perches for hawks and owls, as well as travel lanes for the mammals that prey on prairie-chickens and their eggs.

Suitable habitat also means open, mixed grassland complete with patches of bare ground and thick cover. Such habitat provides safe places for the birds to court and nest, and its open nature gives chicks room to forage for bugs and seeds. To top it off, prairie-chickens need this mix of suitable habitat on at least 4,000 acres scattered within a larger area of 10,000 acres (see Partners in Flight sidebar).

Back to the Future

One of the things that makes the partnership between John Kremp and the Conservation Department so special is the management approach, which is based on a grazing regime called patch-burn grazing.

This approach mimics our native grasslands’ historic rhythms. Before settlement, periodic fires swept the grasslands, clearing them of dead growth and encroaching trees. Following the fires, new grass shot up, attracting herds of buffalo and elk. After these herds grazed heavily on the lush, new growth, they moved on, leaving the grazed land to rest and recover. This combination of disturbance and rest creates the mixed grassland that prairie chickens and other ground-nesting birds need to survive.

The “old-fashioned” patch-burn grazing regime works for modern-day ranchers, too. It lets them manage grazing land with fire instead of fences. In the spring, they burn one-third of a large pasture, stimulating a burst of new growth. Cattle let onto this pasture graze the new growth heavily in the most recently burned patch. Unburned portions receive much less grazing pressure. Managers then remove the cattle after approximately 120 days, allowing the burned, grazed patch to rest and recover.

Over succeeding years, managers repeat the cycle, burning and grazing a new third of the pasture every year, while the animals’ natural grazing preferences allow the remaining two thirds to recover.

Patch-burn grazing research results are impressive from both ecological and economic points of view. A recent Department study, funded by the Natural Resources Conservation Service and conducted with the help of private stockgrowers on five public prairies, showed an increase in the number of native plant and animal species—including prairie-chickens—following the patch-burn grazing regime.

Stocker calves in the study also gained an average of 1.6 pounds per day through the summer months—a rate better by more than half a pound than the 0.97 pounds per day that stockers typically gain grazing fescue in summer. These results suggest that cattlemen can use patch-burn grazing to maximize gains during Missouri’s hot summer months, as well as restore grassland habitat on their land.

An Offer He Couldn't Refuse

Stony Point’s manager, Kyle Hedges, arrived in 2003. A couple of years earlier, the Missouri Prairie Foundation had added 320 acres of adjoining prairie to Stony Point, bringing the area to 960 acres. Kyle got to work implementing the Department’s area management plan, which features woody species control and patch-burn grazing to improve the native prairie.

When Kyle began clearing trees and burning grass on the Foundation’s added half-section, he noticed that the neighbor’s cows would reach through the fence to nip the overly abundant grass on the Stony Point side. The neighbor was John Kremp, who, as is customary on most Missouri cow-calf operations, kept cattle on his pasture year-round.

As the seasons passed, it became obvious to Kyle that the amount of grass left standing on both sides of the fence needed better balance to benefit the birds. Kyle says, “John had cows, and it looked like he could use some more grass. We had grass, but we needed cows to apply our patch-burn grazing regime.”

It was a classic win-win situation for both. Kyle worked with Max Alleger, the Department’s prairie-chicken recovery leader, to develop a plan to build habitat in a way that fit the neighbor’s financial situation. It wasn’t long before Kyle called John and made him an offer he couldn’t refuse.

“The price was right,” John says of Kyle’s offer. It took a while to work out the particulars, and John had to buy a portable corral to move the cattle from pasture to pasture. But he was more than happy to accept 135 days of grazing a year on two different Stony Point tracts in exchange for removing trees and adopting a more conservative grazing approach that would strengthen native grasses and benefit native birds on his own prairie.

John is also pleased that his efforts will help return prairie-chickens to his neighborhood. He and his family have owned the land next to Stony Point Prairie for generations. In fact, the Burns’ tract originally belonged to John’s great uncle. John says he recalls hearing prairie-chickens on their land when he was a boy.

It’s been five years since Kyle invited John to graze cattle on Stony Point in exchange for adding his half-section to the area’s patch-burn grazing regime. Their partnership brought Stony Point’s prairie-chicken habitat to more than 1,280 acres. Quail have increased dramatically, and prairie-chickens have been seen on both the public and private tracts at Stony Point since the agreement was forged.

“We’ve increased the prairie-chicken population in this neighborhood by 200 percent,” Kyle says with a laugh.

Turning serious, he points to a ridge running along the south edge of the Burns’ property. “Chickens like to boom on high, open places,” he says. “I’m almost positive that ridge was a booming ground historically. If we can get boomers back on that ridge, I will consider our work here a success.”

By all accounts, Missouri has about 400 prairie-chickens left. These rare birds have large home ranges that overlap protected prairies and working farms. Restoring boomers to Stony Point—and a sustainable population of at least 3,000 birds in the state—depends on land management practices that create suitable habitat and pay their way across our prairie landscapes. Innovative approaches that fit local circumstances, like the partnership between John Kremp and the Department at Stony Point Conservation Area, are a step in the right direction.

Partners in Flight is a cooperative effort between federal, state and local government agencies, philanthropic foundations, professional organizations, conservation groups, industry, the academic community and private individuals. Its mission is to help species at risk, keep common birds common and offer voluntary partnerships for birds, habitats and people. The Conservation Department approved the Partners in Flight’s recommendations for recovery of the greater prairie-chicken in Missouri in 2006.

The Partners in Flight Grassland Bird Conservation Area Model recommends management of open, grassland-dominated landscapes of at least 10,000 acres, along with the following criteria:

Six such landscapes are in Missouri (see map). Recovery will be considered accomplished when a Missouri population totaling at least 3,000 birds, with no fewer than 200 individuals on any one of the six target landscapes, persists for 10 years. Long-term goals of Partners in Flight include delisting the greater prairie-chicken as endangered in Missouri.

Efforts to reestablish a breeding population of greater prairie-chickens in St. Clair County are starting to show signs of success. In the spring of 2008, the Conservation Department trapped 45 male prairie-chickens in the Smoky Hills region of Kansas and brought them back to be released at Wah’Kon-Tah Prairie near El Dorado Springs. Prairie-chicken hens and chicks from Kansas arrived at Wah’Kon-Tah the following August. Conservation Department workers repeated the process in 2009 and are well into the third cycle of the five-year habitat-use study, which is part of Missouri’s Greater Prairie-Chicken Recovery Plan. So far, they have released 200 prairie-chickens. The adults—148 in all—have been fitted with radio transmitters so biologists can track their movements and survival. Approximately one-fourth of the translocated birds remain alive on Wah’Kon-Tah Prairie and other nearby grasslands. A few have moved to Taberville Prairie 10 miles north of Wah’Kon-Tah or joined a small natural remnant prairie-chicken population between El Dorado Springs and Nevada. Some males have returned to the booming ground established on Wah’Kon-Tah Prairie in 2009. These are positive indications that initial translocation efforts are proving successful and that there may have been reproduction on Wah’Kon-Tah Prairie last year.

Consider joining a Missouri Grasslands Coalition group, which offers opportunities for everyone from birdwatchers to hunters to farmers.

Missouri has six Grassland Conservation Opportunity Areas. If you have a quarter-section or more of native prairie in one of them and would like to discuss the feasibility of a cooperative public-private patch-burn grazing regime, contact your closest regional office. 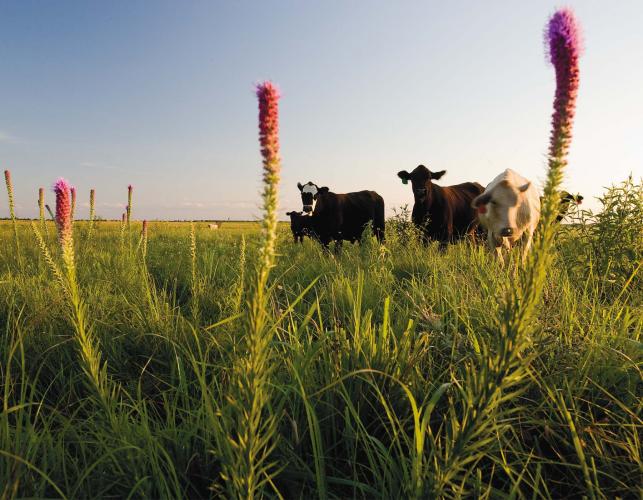 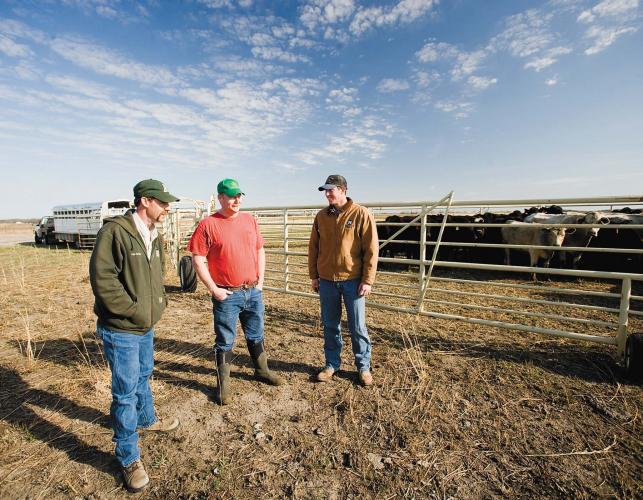 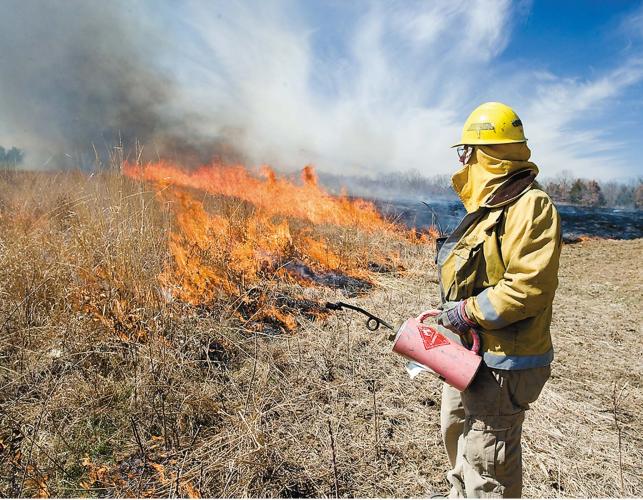 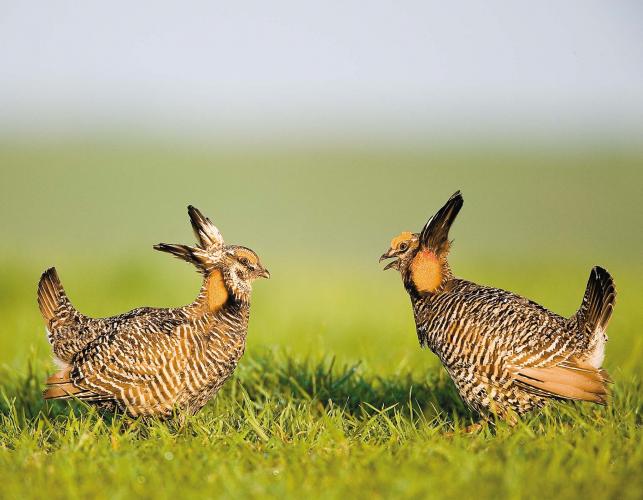 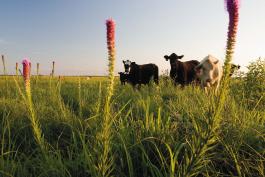 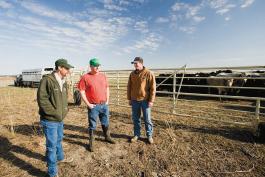 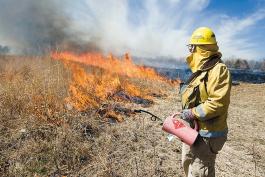 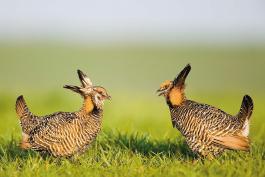