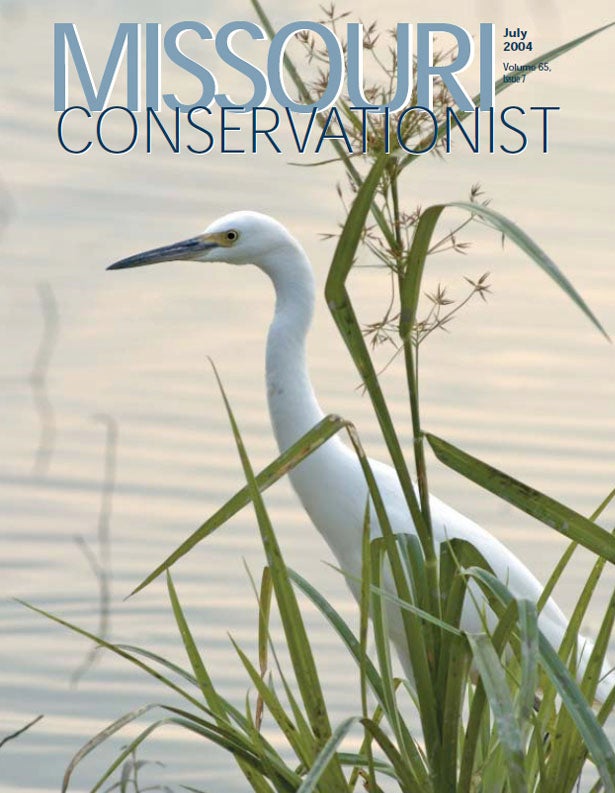 You've probably heard the adage,"When life gives you lemons, make lemonade!" Missouri has been given some lemons in the form of bighead and silver carp. These large, plankton-eating fish, native to Asia, were imported into Arkansas in the 1970s to control water quality in fish farms and sewage treatment facilities. It didn't take long for the fish to escape to the wild, and their populations have been increasing ever since.

The Mississippi River and its tributaries were excellent highways for bighead and silver carp, allowing them to expand their range as far as Louisiana, South Dakota and Ohio.

In Missouri they are plentiful in the Missouri and Mississippi rivers. People using nets have taken more than a ton of large Asian carp from the calm area behind a single wing dike on the Missouri River. We don't know yet what the effect these exotic carp are having on native fish, but we are concerned they may have an impact on populations of native plankton feeders like paddlefish and gizzard shad.

A more immediate threat to Missourians is the possibility of Asian carp, especially silver carp, jumping into moving boats. You may imagine it would be quite novel for a 20-pound fish to jump into your boat, but being hit by a large Asian carp would be similar to being hit by a bowling ball.

When you add the speed of the boat to the force of impact, the threat of collisions become even more serious--possibly deadly. Even if the fish don't hit you, they can break fishing rods, windshields, electronics or anything else in your boat. As if adding insult, the carp will leave slime, blood and excrement on everything it touches.

The Missouri Department of Conservation and the U.S. Geological Survey are studying the threat of Asian carp and hopes to develop some methods to control the populations of these fish. Until then, they are like lemons that we have to deal with.

Fortunately, bighead and silver carp have a redeeming value: Their meat is absolutely delicious. I have eaten them pan-fried, deep-fried, grilled, baked, steamed, smoked, in curries, in soup and even pickled. They are delicious when prepared in any of those ways.

Don't believe all carp taste the same. There is no comparison between the firm, white, flaky meat of bighead and silver carp and the darker, strong-tasting meat of common carp. Silver carp also happen to be a better source of Omega-3 fatty acids (the "good chloresterol") than salmon.

The only drawback to eating bighead and silver carp is that they have lots of intramuscular bones. All carp have these Y-shaped bones. They remain in the fillet in two rows, one above and one below the lateral line. A carp fillet also contains a strip of red meat along the lateral line. This should be removed, much like the "blood strip" of a striped bass or white bass.

By the time you clean a bighead or silver carp, the remaining fillets will only be about 20 to 25 percent of the weight of the fish you caught. However, because these fish are so large and plentiful, you can still put a large amount of high-quality meat in the boat. For example, 150 pounds of silver carp jumped into my boat one day. After cleaning, I had 30 pounds of great meat.

Scoring the fillets of some "bony" fish chops up the bones. If you then fry them in very hot oil, the bones dissolve to the point that you don't notice them. Scoring, however, does not work with Asian carp larger than about 2 1/2 pounds because the bones will be too large.

The fish we catch on the Missouri River average between 12 and 15 pounds. The Y-bones on a 15-pound Asian carp can be up to 4 inches long. These are much too large for scoring, but they are large enough that you can easily remove them from the cooked flesh. Take care to not cut through the bones when cleaning the fish because that will simply make the big bones into lots of little bones that are annoying or even dangerous. triangle

Bighead and silver carp are abundant in the Mississippi and Missouri rivers and their larger tributaries.They usually frequent slow-moving water at least 8 feet deep.They often can be found in the calm water behind wing dams.

Bighead and silver carp are filter feeders, so it is hard to capture them with traditional fishing methods.Very rarely will one strike a lure. Bighead and silver carp can be captured during the paddlefish snagging season and during the nongame fish snagging season by jerking a weighted treble hook through the water in areas where the fish are abundant.

Bighead carp have a habit of feeding by skimming the surface film, which makes them easy (although skittish) prey for bowfishermen. Shooting fish with a firearm is illegal in Missouri, but it is legal to shoot nongame fish, including Asian carp, with a bow.

In Europe, a popular method for catching silver and bighead carp is to make a large, fistsize doughball that slowly disintegrates into tiny pieces.

The doughball is suspended below a large bobber. Several small hooks on short leaders are tied to the line just above the doughball, making a nest of hooks around the bait. A carp will bump and mouth the bait trying to knock off pieces small enough to swallow, and often becomes hooked.You have to be patient and not set the hook too early, because the bobber might bounce and pull under many times before the fish becomes hooked.

Here in Missouri, fishermen report catching many bighead carp on trotlines when using cheese for bait. Likely these fish also hook themselves while trying to dislodge small particles of cheese.

One of the easiest ways to catch an Asian carp in Missouri is when the fish "volunteers" by jumping into your boat. If you spend much time on the Missouri's big rivers, it will happen to you. When it does, you know it's time to make lemonade.

Remove the fillets from the body of the carp (1) as you would any other fish. Cut around the ribs, leaving them attached to the skeleton.

Lay the fillets skin side down on a cutting board and cut them in half lengthwise, cutting through the skin (2). Remove any fatty belly meat from the fillet. It has a strong flavor.

Skin the fillet halves by laying them skin side down on the cutting board and slicing the meat from the skin, starting at the tail section (3). An electric knife works especially well for this, but any sharp knife will do.

Remove and discard the dark red meat from the fillet halves (4).You now have delicious white meat, but there are still Y-shaped intramuscular bones hiding inside.

Cut the rib cage section off. It is now boneless so you can use it without further preparation.

The Y-bones (5) lie lengthwise at an angle through the fillets. Slip the fillet knife in between the bones and cut strips that contain two or three bones, taking care to not cut any bones. It won't take long to understand exactly where the bones lie.

Now roll these fillets in cornmeal or your favorite breading and fry them as you would any fish. At the table, break the strip in half. The bones will stay in one half.You can eat the boneless half of the strip, then grab the Y-bones and pull them from the other half and eat it, too. It's a lot like eating hot wings, but not as messy.

If your family insists on fish with no bones at all, with a little more work you can remove all the bones from a fillet.The shape of the meat that results is different from what most people are familiar with, but the taste is excellent.You should start with a fish of at least 8 pounds, at least until you are familiar with the technique.

Start with the top half of a fillet. Lay the fillet on your cutting board so that the outside of the fish is up.With your fingers, feel for a hard portion on the first inch of the filet.There are a couple of unusual pine cone-shaped bones in the first inch or so of the top half of the fillet.These make bone removal from that section impossible. Starting behind this hard section, holding your knife parallel to the cutting board, cut a long strip of meat from the top of the fillet, exposing the Y-bones (6).This will result in a boneless piece of meat about as thick as a crappie filet, but about two inches wide and very long.

Using shallow cuts, free the meat from above and below the exposed Y-bones (7).

Turn the fillet over.You will see a row of white dots that indicate where the point of the Y-branch of the bone nears the cut surface of the fillet.Make a cut parallel to and right above the row of dots (8). Cut down until the knife contacts the main shaft of the Y-bone.Cut and scrape sideways with the knife to remove a long, rope-like piece of boneless meat.

Repeat step 3,making your cut just below the row of dots (9) and removing the remainder of the usable meat from the top half of the fillet.

Repeat above with the other side of the fish. Once you become proficient, it takes about 20 minutes to completely de-bone an Asian carp. That may seem like a lot of work,but if you can generate 3 pounds of bluegill fillets in a similar time, you are faster with a fillet knife than Zorro is with his sword. 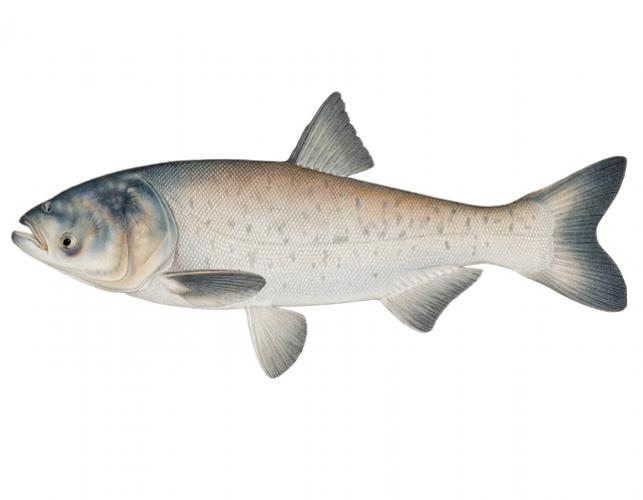 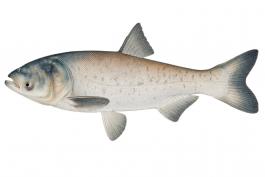