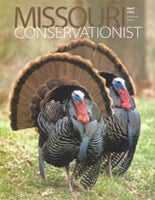 Last summer, I went out each day to visit a plant in a garden near our front door. It was a double impatiens, which develops a bouquet of dark green leaves and white, rose-like flowers.

I'm not a great gardener, so it was something of a miracle to have such a gorgeous plant not only surviving, but thriving.

Then one morning I discovered every one of its dozen flower stalks was gone, nipped off, presumably consumed. I was experiencing double impatience with myself. I had fallen for a pretty plant and brought it home, never stopping to wonder if our neighbors, a small herd of white-tailed deer, might appreciate it, too.

Losing my impatiens was disappointing, but it didn't prepare me for what came next. In March, I found every daylily sprout clipped and every emerging tulip munched to the ground. With little new growth in the woods for them to eat, the hungry deer had been coming to my garden to gobble up juicy young plants.

Our rural street is surrounded by acres of woods. A few years ago, my husband and I began to see deer around. We liked to watch them, and sometimes the deer watched us with their own style of curiosity. They wandered through our yard and browsed and rested in the nearby woods. We enjoyed seeing fawns, too, but we didn't realize then what this meant in terms of our future gardening efforts: The herd was growing, and the deer would eat whatever they found attractive. This year, I finally decided that the only way to continue to enjoy my garden would be to make it deer-proof.

Wildlife experts never use the term "deer-proof." They know white-tailed deer will eat almost any kind of plant if they're hungry enough and, even if well fed, will sample plants they're not supposed to like. When landscape architects in New Jersey established test plots of "deer-resistant" plants, deer damaged every species over a two-year period.

Nursery catalogs, Internet sites, books and pamphlets identify species that are "deer-resistant." But are they really? Deer-resistant plant lists published in different areas of the country often contradict one another. A plant may be "attractive to deer" on one list and "not favored" on another.

One reason it's difficult to compile a list of deer-resistant plants is that deer appetites seem to vary from one deer herd to another. Scott Woodbury, horticulture supervisor at Shaw Nature Reserve near Gray Summit, says deer in the reserve's unfenced natural areas like the early-emerging trout lily (Erythronium albidum). In our woods, trout lilies grow right next to a deer trail and seem untouched.

Individual deer also may have varying preferences and needs. Deer have been known to develop a taste for a species of plant they previously ignored, and the increased nutritional needs of pregnant or lactating does may lead them to consume plants they otherwise would avoid.

That doesn't mean it's impossible to design gardens that won't ring the deer's dinner bell. If you share your neighborhood with deer, you probably already know which of your plants deer like and which ones they leave alone. In our own gardens, columbine, vinca minor, purple coneflower, daffodil, surprise lily, yarrow and many other species have escaped the browsing herd.

On the other hand, deer certainly seem to relish some of our favorite garden plants, including tulips, hostas and daylilies. A simple strategy of not planting such deer-delectable species will likely reduce deer damage. If you aren't sure whether deer like a plant or not, plant just one or a few as a test. If the deer leave the plants alone, you can feel safer about investing in more of the same species.

Deer seem to avoid certain textures in plants, so consider fuzzy-leaved lamb's ears or mullein. Rough or tough leaves generally repel, as do herbs with strong aromas and flavors. Flowering plants in the mustard family, such as alyssum and nasturtium, have done well for some gardeners.

Plants that appear after the woodland leafs out may be safer than early starters. Even then, a palatable plant's survival depends on whether a deer happens to come by or not. Remember, too, that some nibbled plants aren't necessarily goners. They may grow new leaves and bloom later. Even after the deer bite them off, our daylilies keep growing.

Using only native plants also may discourage deer. Rose Allison of Carthage reports having as many as 13 deer visit her yard. "Most of my wildflowers are not bothered, except spiderwort." She attributes her garden's success to the fact that it is composed entirely of native species.

Although native plants generally aren't as attractive to deer, they won't repel them from your garden. Natalia Hamill, horticulturalist and former director of marketing for the Conservation Department's Grow Native! program, says that a strategy of interspersing native species won't protect your garden favorites.

"Deer have a knack for finding their favorite plants even when they're mixed in with the non-favorites," she said. "They'll eat every hosta but won't touch the celandine poppy planted next to the hosta."

Some people refuse to let the possibility of deer depredation keep them from planting their garden favorites. Alan Branhagen, director of horticulture at Powell Gardens near Kansas City, said, "We have a minor deer problem, but we don't let it dictate what we plant. Our philosophy is that people should plant what they like."

In late winter and early spring, azaleas, violas, pansies and hostas tempt the deer. "The deer think we're providing a wonderful salad bar for them," Branhagen said. Powell's gardeners use an egg-based repellent to keep the deer away from those plants.

Understand that if you want to enjoy your pretty plants, you'll have to protect them. Network with local gardeners to learn which repellent sprays work best. Keep in mind that the only sure way to protect plants from deer is to erect 8-foot fences around your gardens.

When an area is overwhelmed with too many deer causing too much damage, wildlife specialists suggest the option of hunting during the state's deer season to thin the herd. A Conservation Agent can tell you how hunting may be able to help in various situations, from town to suburb to countryside. If you don't hunt, consider allowing friends and neighbors to hunt.

One more thing to consider is that deer may not be your problem. If you don't see the deer browsing (they usually are more active at night) and you don't find clear signs like tracks or deer scat, other critters may be munching your garden plants.

During a talk titled "Oh, Deer!" at the Missouri Botanical Garden, Patrick McNulty of Creve Coeur advised those attending to positively identify what was damaging their garden before trying preventative measures.

"Woodchucks, birds, rabbits, and squirrels can cause extensive damage," he said. "One homeowner reporting deer damage was actually receiving visits from a neighboring llama."

Any tender, succulent plants fresh from the nursery, where they have been watered and fertilized, may attract deer, especially early in the season, when green vegetation in their natural habitat is not available. Although no plant is guaranteed to resist deer browsing, gardeners have reported success with the following species.

Observers rate many herbs as deer-resistant, because of their strong aromas and flavors.

These trees are rated by various observers to be rarely damaged, seldom severely damaged or deer-resistant. Protect small seedlings with tree shelters.