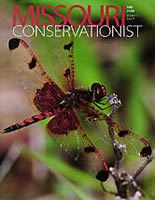 The tiny stinging cells on tentacles of freshwater jellyfish are used to paralyze microscopic animals in the water called zooplankton. The jellyfish then consume these immobilized prey for nourishment.

Freshwater jellyfish, Craspedacusta sowerbyi, likely originated in China, but the species was first described by a researcher in England during 1880. It has been reported in lakes, old quarries and ponds in the United States for over 100 years.

Biologist Rudolf Bennitt provided the first Missouri record of freshwater jellyfish in 1930; however, people continue to be amazed when they encounter this invertebrate in Missouri waters. Some of the mystery associated with freshwater jellyfish can be attributed to the life cycle of this organism. Freshwater jellyfish spend much of their lives in an inconspicuous polyp stage on the bottom of lakes and tributary streams.

Polyps are minute creatures, less than one-eighth-inch long, and live in colonies attached to underwater snags, logs and other structure. The polyps feed on a variety of other organisms, including zooplankton, worms and even larval fish. The polyps reproduce asexually by budding.

Asexual budding is a process by which an outgrowth of cells from the body wall of one individual develops into a new individual with an identical genetic makeup. When polyps bud, the process usually results in production of more polyps-much like the process by which a strawberry plant sends out runners that develop into new plants. However, when environmental conditions are just right, polyps can produce buds that develop into medusa-free-swimming jellyfish. Unlike polyps, jellyfish represent a sexual stage in the life cycle, similar to the flowers of a strawberry plant.

The jellyfish is umbrella-shaped, and its bell is fringed with numerous tentacles. By contracting its bell, the jellyfish moves rhythmically up through the water column until it reaches the surface. Then, it floats downward with tentacles extended to capture prey.

Each jellyfish is either male or female, and they eventually release eggs and sperm into the water. Their fusion produces a fertilized egg that sinks to the lake bottom and develops into new polyps, starting the cycle over again.

How much freshwater jellyfish affect the productivity of a fishery is unclear. When jellyfish are placed into an aquarium containing fish, the fish readily attempt to eat them but then quickly reject them. Anglers have reported a decrease of fishing success when jellyfish were present. Also, fin damage and death of young fish due to contact with the tentacles have been observed in the laboratory.

On the other hand, it appears crayfish find freshwater jellyfish appealing. When we put jellyfish into aquaria containing crayfish, the crayfish consumed the jellyfish like children eating popcorn.

Little is known about environmental factors that trigger production of freshwater jellyfish. Their occurrence is unpredictable. Large numbers appear like snowflakes in the water during some years but may not reappear until several years later, or not at all. In Missouri, during years when jellyfish are present, look for them from July through September, when surface water temperatures are near 80 degrees.

Freshwater jellyfish are yet another example of the diverse and fascinating aquatic fauna inhabiting waters of the Show-Me-State.