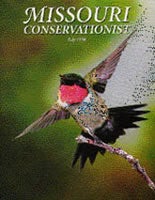 Over thousands of years, the clear waters of the Castor River have cut into ancient pink granite to create deep gorgelike chutes. Now trapped in these narrow channels, the rushing waters roar.

Old growth pines and cedars dot the high, steep banks, their verdant tones contrasting with the luminous salmon-colored boulders. In May, azaleas bloom in the rocky woodland and add their speckled pink delight.

You can enter this scene, if you visit the 1,630-acre Amidon Conservation Area, which lies on the border of Madison and Bollinger counties in southeast Missouri.

The area is located in the St. Francois Mountains, the principal location in Missouri where granite and rhyolite are exposed at the earth's surface. Granite and rhyolite are two types of igneous or fire-formed rock created over a billion years ago as molten lava flowed over the land surface, and deep magma cooled and solidified.

The deep, narrow channel of the Castor River in the northern part of Amidon Conservation Area is a classic example of a shut-in. Shut-ins are geologic features that are formed as streams erode away relatively soft limestone and dolomite, until they encounter deeper igneous rock, which is much harder to erode.

Streams and rivers running through igneous rock can cut only deep, narrow channels and are given little opportunity to form meanders as most streams do. As a given volume of water passes though these shut-ins, the water's velocity increases, creating the rushing, bubbling effect that makes the scene at Amidon so appealing.

Amidon Conservation Area was named for Evelyn and Ellsworth Amidon, who donated part of the area to the Missouri Department of Conservation in 1984, but many local people still know the area as Hahn's Mill. In the late 1800s, two brothers, Fred and John Hahn, operated two mills on the area.

The Mill Shoals mill, near the north end of the area, was used to grind grain. The river was dammed at the top of the shut-in and a mill race was cut through the adjoining granite. Water was channeled to a water wheel and turbine that were located downstream. This mill was destroyed by a flood in the early 1900s, but holes in the granite are still visible at the mill site, presumably where pins attached the structure to the rock.

The mill at the lower end was located several hundred feet from the river, and a long race carried water across a field to the mill. It was used to grind grain, but also served other purposes, such as powering a wool carding machine. This machine combed the wool fibers and straightened them so that they could be spun into yarn at home. This lower mill was torn down around 1930, but the stone foundation is still intact.

Local farmers brought their corn to these mills to be ground into meal and the miller was often paid with a portion of the corn. Since the miller's "wages" would soon spoil or be eaten by mice and rats, the corn was fermented and distilled into whiskey. This commodity could not only be stored but would actually improve with age.

With more than two miles of frontage on the Castor River, the area provides good fishing for smallmouth bass, shadow bass and sunfish. Shadow bass and sunfish can be taken all year long but black bass (smallmouth, largemouth and spotted) are legal only in season. Any black bass less than 12 inches long must be immediately released unharmed. Anglers usually wade the river or walk from rock to rock and cast into pools.

Hunting is permitted on all of Amidon Conservation Area, in accordance with statewide regulations. The area has good populations of deer, turkey, squirrels and other game animals. Wildlife management activities on the area include prescribed burning, planting food plots and warm season grasses, development of wildlife watering holes and maintenance of brushy cover along field edges.

A 209-acre portion of Amidon Conservation Area is designated as the Castor River Shut-Ins Natural Area and is part of the Missouri Natural Areas System. This system ensures protection and management of high quality examples of the state's natural communities, their associated rare and endangered species and unique geologic features.

The natural area contains over 136 plant species in six natural communities. The Castor River itself is a high-quality example of an Ozark creek community and supports at least 35 fish species. The river is also home to golden and spothanded crayfish, two species that are found only in the Ozarks. Within the natural area, visitors can seek out rocky openings called granite glades. These dry, desertlike natural communities usually occur on slopes that face south or west.

The thin, rocky soil discourages most trees, but is relished by a host of grasses and wildflowers, such as little bluestem, pencil flower, pineweed, rushfoil, wild hyacinth, flowering spurge, prickly pear and sundrops. In May or June, male collared lizards bask atop rocks, attempting to court females by displaying their emerald bodies and bright orange throats.

Charred cedars on the glades are evidence of a recent prescribed burn, conducted by the Conservation Department to improve the quality of the glade. Prescribed burns are carefully planned and executed to mimic natural fires. Burning controls cedars and other fire-intolerant trees and shrubs that have invaded the glades in the absence of natural fires. With these invaders under control and open conditions restored, the rich diversity of glade grasses, wildflowers and wildlife can flourish.

Even the casual visitor to Amidon should try out the hiking trail. It is a one mile loop that begins at the northern parking lot, passes along the shut-in, bisects several forest communities, and then returns to the parking lot. This trail reveals some of the most stunning views on the area.

Take a walk along the rocks at Amidon Conservation Area and let your imagination take you back 100 years. Visit the old mill sites and imagine early settlers hauling their corn to the river and returning home with meal. Climb up the rocky hills to a glade opening and gaze out over the wooded hills and valleys. Don your old sneakers and wade in the cool, clear waters of the Castor. Amidon Conservation Area is a rich landscape with a vivid past. Come explore it.

Amidon Conservation Area is located about eight miles east of Fredericktown, north of Highway 72 and south of Highway J. For more information, contact the Southeast Forest District office at (573) 290-5730.