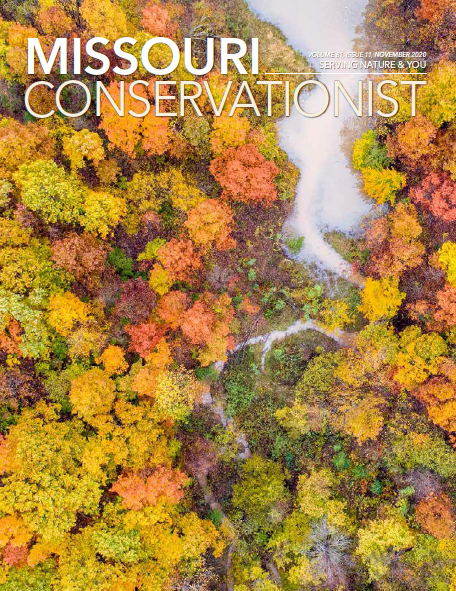 Healthy waters that Missourians enjoy in the outdoors begin in the uplands, where rainfall and groundwater flow downhill into creeks that merge into streams. Those streams feed lowland rivers and lakes, waters that won’t support fishing, swimming, boating, and floating unless streams are healthy throughout the drainage.

Streams are always changing. They are powerful and dynamic forces. Their varied water flows and sediment loads shape river banks, stream beds, and pool depths. Human land use practices or structures, such as bridges, can alter water flows and sediment loads in ways that damage streams. But people can also restore and protect streams using both human engineering and nature’s healing abilities.

The SSTF and grants from other partners help pay for costly stream engineering projects and conservation easements. They protect small and mid-size streams where smallmouth bass swim and children splash and play. For example, a new bridge on Tavern Creek in Miller County and bank stabilization on Bull Creek in Christian County are two recent projects of the many that have protected Missouri streams.

“We can make a big difference for stream quality,” Fischer said.

Under the federal Clean Water Act, developers are required to mitigate any damage to a stream before they can obtain a construction permit from the Corps of Engineers. Developers can directly bear the cost of stream restoration onsite, or they can purchase credits held by stream mitigation banks or in-lieu fee programs. Those credits are for stream improvements completed or planned. The SSTF is an in-lieu fee program administered by the Missouri Conservation Heritage Foundation, a private non-profit conservation partner. When developers purchase mitigation credits from the SSTF, that money can provide funding for stream stewardship projects.

Priority is given to high quality streams or those with imperiled species. MDC staff provide expertise and assistance, from project plans to help with tree planting along the stream corridor. This enables SSTF to protect some of Missouri’s finest small and mid-size streams in a state where people value their rivers. Since the 1990s, MDC and partners have used $6.1 million in SSTF grants to fund more than 100 projects, and 10 more are in progress. Not all project requests can be accommodated due to fund availability, project location, or shortfalls in ecological uplift.

The federally threatened, state endangered Niangua darter occurs only in Missouri in northern-flowing tributaries of the Osage River. MDC has worked to improve habitat for the endangered Niangua darter in these drainages. Dams and reservoirs affect the darter’s habitat, and outdated bridges and low-water crossings cause stream changes and block fish passage. This hurts the darter’s genetic diversity and its ability to repopulate suitable riffles and pools. Those outdated crossings can also pose problems for people when flooding blocks vehicle traffic, causing detours and delays for residents, school buses, emergency responders, and farm equipment.

The Miller County Commission has partnered with MDC, SSTF, and the U.S. Fish and Wildlife Service (USFWS) to replace several stream crossings, helping both darters and drivers. One recently completed bridge across Tavern Creek serves traffic on Clark School Road. The county’s road district would not be able to afford the bridge replacement without help from the conservation partners, said Miller County Associate Commissioner Travis Lawson.

“It’s helped us replace bridges,” Lawson said. “It is working for the county, and it is working for the stream. The last contractor who won the construction bid was born and raised a mile from that bridge. He’s planning on bidding on others. This helps our local residents and puts money back into our county, too.”

The new bridge span has a wide opening beneath the deck where the water flows, unlike the prior bridge with a narrow and blockage-prone box culvert. This allows a more natural water flow and sediment movement typical of an Ozark stream. Niangua darters and other aquatic life can move upstream or down. Water still overflows the bridge when flooding follows heavy rains, but the new design allows the water to flow more naturally.

“The more genetic diversity they have, the more resilient a fish population is going to be during the unusual situations they get in,” Stoner said. “It benefits all the aquatic species.”

Tavern Creek has a variety of clear-water fish species typical to the Osage River basin. Local residents still fish for many species in the stream.

Sometimes boosting stream health requires a change in the river to offset human land use.

Robert and Barbara Kipfer of Springfield used the SSTF program to protect an eroding bank of Bull Creek on their Christian County farm. A variety of fish, crayfish, mussels, and insects live in the clear, cool stream’s riffles, pools, and eddies. Bull Creek eventually flows into Lake Taneycomo, a favored cold-water trout fishing destination for anglers.

The Kipfers host family, friends, researchers, and school groups at their scenic Bull Creek valley farm. Their grandchildren swim in the deeper pools. But a problem developed along a creek section bordering an old fescue-covered hay pasture. High water flows eroded a bank, causing land loss and leaving a wide and shallow stream bed not as hospitable to fish.

The Kipfers, both Missouri Master Naturalists, noticed floods and gravel deposits growing bigger. Development from Springfield’s growth has entered Bull Creek’s upper drainage, possibly increasing water flows after rains. After they added the tract with the eroding hayfield to their farm, they planted trees along the bank to stabilize it. But a major flood eroded away those trees and more bank.

A $95,700 stream stabilization project using SSTF funds was planned and implemented for the Kipfer property with the help of Dave Woods, MDC fisheries management biologist. Rock and vegetation were installed to stabilize the eroding bank. Three fish-friendly reinforced stream crossings were also installed for light vehicles and equipment. Several thousand trees were planted as a 100-foot buffer along the riparian corridor to keep soil in place and provide wildlife habitat. More than a mile of Bull Creek and a tributary on their property is now protected by a perpetual conservation easement held by MDC. The easement was a requirement for the project to be approved. Landowners control access to property within the easement. But land use practices within the easement must meet guidelines benefitting natural stream ecology.

“I was out there after spring rains and it looks great,” Woods said. “Erosion has slowed, the channel has deepened, and the gravel bar has stabilized. The trees are starting to grow along the banks.”

Bull Creek is designated as an Outstanding State Resource Water with high water quality by the Missouri Department of Natural Resources. The stream’s health also contributes to maintaining water quality in Lake Taneycomo and the White River basin.

“It’s a pristine stream right now, and we want to keep it that way,” Woods said. The Kipfers are counting on the rock project to allow a wider tree buffer to become established, which will help keep the stream naturally healthy. Smallmouth bass swim in the stream and an occasional rainbow trout is seen. MDC biologists have found unique crayfish and mussels in upper Bull Creek.

“It is a very, very clear stream,” Robert Kipfer said. “It has been named one of the outstanding streams of Missouri. It has a wide variety of flora and fauna. The water quality is so good, it tells us what a stream can be if we take care of the environment.”

MCHF has obtained Corps of Engineers approval to use the SSTF for projects in selected river basins. When property owners wish to make a stream improvement, MDC and partners may be able to help. Most projects are on small streams because larger streams are difficult and expensive to manage. But even effective improvements for small streams are costly.

In many cases, a partnership between MDC, the Missouri Conservation Heritage Foundation SSTF program, the Corps of Engineers, and other conservation partners is the only way landowners or property managers can get expensive projects like stream bank armoring or bridge replacements done. Conservation and communities benefit. Any developer or property owner seeking more information about the SSTF program can contact their local MDC office for more information (see Page 2 for contact information). MDC staff will offer expertise in stream corridor issues and connect them with programs that may be able to help.

“It is important to remember that more than 90 percent of the land in Missouri is privately owned,” Woods said. “If we want to do conservation on a watershed scale, not only for rivers and lakes but for wildlife, too, the Stream Stewardship Trust Fund is a great tool.”

Missouri’s nationally renowned conservation achievements are due to partnerships between public agencies, private organizations, and citizens. A key partner for MDC and others is the Missouri Conservation Heritage Foundation (MCHF). The foundation administers the Stream Stewardship Trust Fund (SSTF) that has helped enhance many miles of Missouri’s best streams. In partnership with MDC, the SSTF helps pay for improvements and protections for small and medium-sized streams.

But the MCHF also plays a broad role in promoting conservation and outdoor recreation. MCHF is a nonprofit organization founded in 1997 to advance conservation and the appreciation of Missouri’s natural resources including fish, forests, and wildlife. The organization works with donors and other conservation partners to financially support the mission and priorities of MDC at the state, national, and international level.

“This means we invest in everything from migratory bird programs to youth hunting and fishing events to endangered species habitat protection,” said Tricia Burkhardt, MCHF interim director. “We support the state’s nature centers, as well as hiking and wildlife viewing activities — anything that allows Missourians to enjoy the outdoors in urban and rural areas.”

MCHF is governed by a volunteer board of directors comprised of conservation, community, and business leaders. The organization has raised and invested more than $22.4 million in conservation projects large and small. MCHF has sponsored outdoor programs for disabled veterans and people with special needs. They also provide long term support for the Missouri National Archery in the Schools Program.

“We believe every student has an opportunity in archery and our support is one of the ways we invest in the lives of those who will carry on conservation’s future,” Burkhardt said. 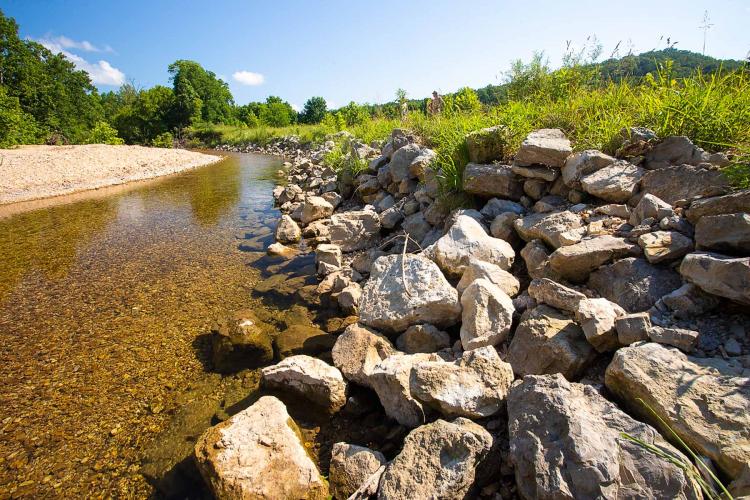 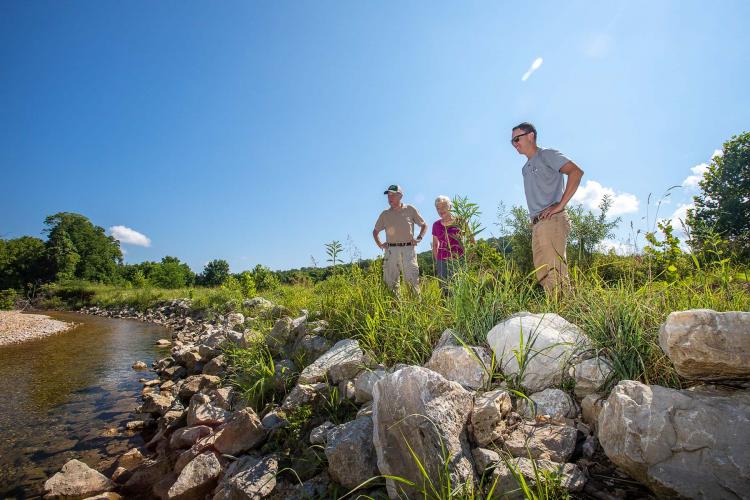 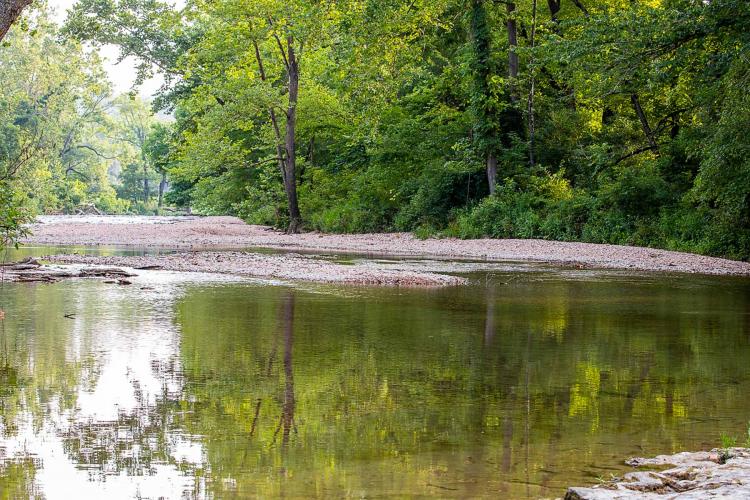 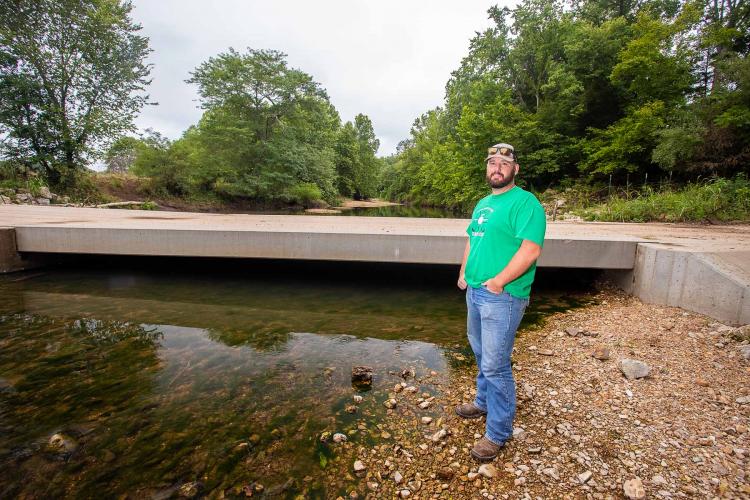 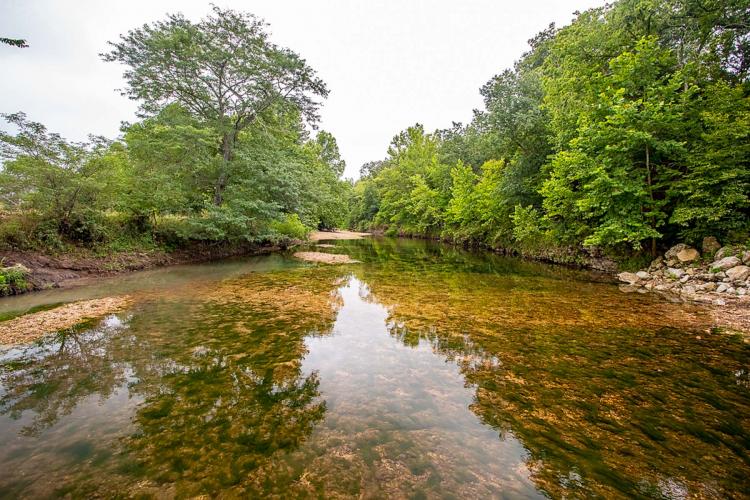 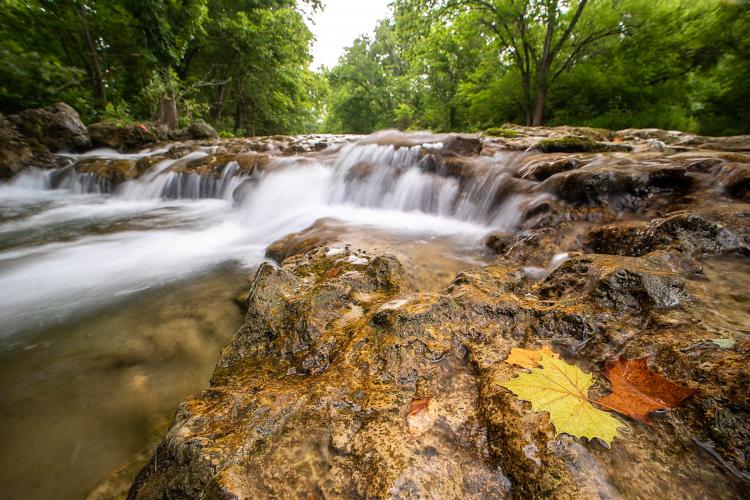 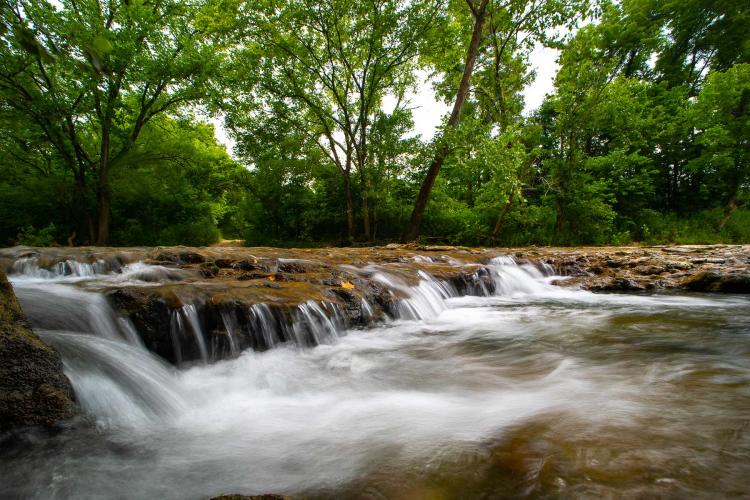 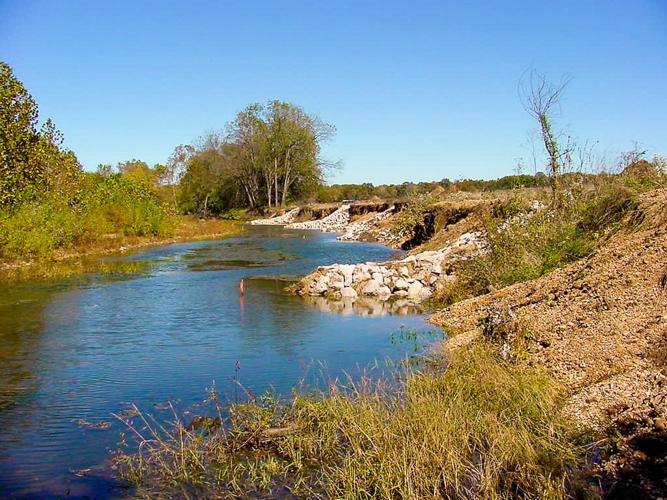 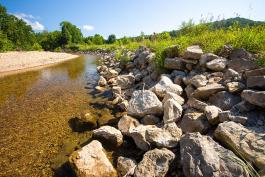 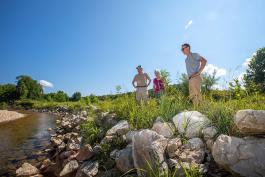 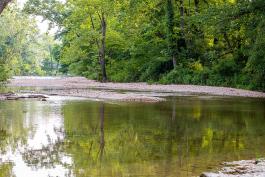 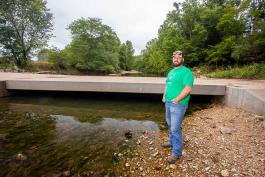 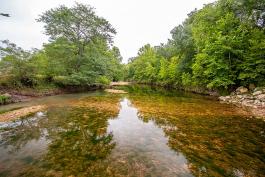 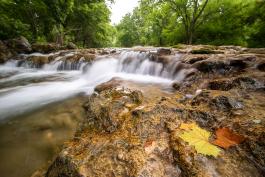 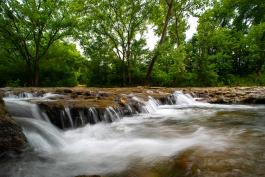 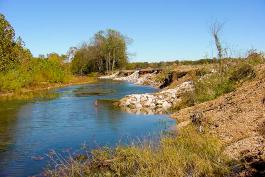 Media
Nature’s Holiday Décor
Body
Bringing the outside in.
Media
Wetland Restoration
Body
Working with — instead of against — nature.