The striped fishing spider is one of eight species in genus Dolomedes in North America north of Mexico. Like most of the other fishing spiders, it is semiaquatic, usually found on or very near water. It does not build a web. The markings and degree of shading are variable, but the overall color is usually brown, tan, or grayish. Some individuals have a bold white or tan stripe running down each side of the body. There is a series of dark W-shaped marks on the abdomen, and these are separated by complete white Ws in between. The abdomen pattern is fairly ornate, looking sculpted. On the carapace (head), a clear, complete line runs all the way down the center.

Fishing spiders in genus Dolomedes might be confused with nursery web spiders (Pisaurina spp.), which are in the same family, and with various other types of fast-running spiders such as wolf spiders (family Lycosidae) and grass spiders/funnel weavers (family Agelenidae).

The striped fishing spider lives along streams, especially fast-flowing streams, but can occur along nearly any body of water. They typically rest right along the water’s edge, with their forelegs stretched out on the surface of the water. Using their specialized, hairy feet that repel water, they can just as easily dash out across the surface of the water as they can run along the bank of a creek or among the rocks of a gravel bar.

Insects (both aquatic and nonaquatic) and other small prey, including small fish. Fishing spiders, as a group, are semiaquatic, typically resting and walking on the surface of the water. They typically rest with hind legs on solid land and forelegs outstretched onto the water’s surface. In the same way a web-building spider uses vibrations of the webbing to know when she’s captured an insect, the fishing spider can feel vibrations on the surface film of the water, caused by insects that have fallen into the water. Fishing spiders can rush across the water’s surface and nab prey. They can also walk down underwater to capture small aquatic animals.

As a general rule, spiders in temperate areas hatch from eggs in spring and spend the growing season eating, maturing, mating, and laying eggs. Female spiders are usually much larger than males and sometimes eat the males after mating. Females continue creating egg cases as long as the weather holds out. As temperatures cool in fall, their metabolism slows, and they generally die when it freezes. Egg cases overwinter, and spiderlings hatch in spring.

As with other fishing spiders, females of this species typically carry their egg sacs in their chelicerae (fangs). This is a helpful way to distinguish between fishing spiders and wolf spiders, which typically carry their egg sacs attached to the spinnerets at the hind end of the body. (Wolf spiders that have dropped and retrieved an egg sac may temporarily carry it in their fangs, however.)

Fishing spiders and other lowland and aquatic insect-eaters capture and consume countless flies and other insects that vex us when we’re boating, fishing, or trying to enjoy a streamside picnic. It’s up to us to decide whether or not to be afraid of spiders. We can train ourselves to tolerate them and appreciate the all-natural pest-control services they provide.

The genus name, Dolomedes, is from the Greek root “dolo-“ meaning fraud, deceit, or trickery. Perhaps this name arose from the spiders’ ability to go underwater to capture prey. The species name, scriptus, is from the Latin root “script-“ meaning writing. It probably refers to the spider’s fine, undulating, W-shaped markings.

Striped fishing spiders, as predators, help to control the animals they hunt — mostly insects, but also a variety of other small aquatic animals. The spiders, however, must be careful, since they are preyed upon by larger animals — both in and out of water. Fish, dragonfly nymphs, frogs, birds, and many other animals prey on fishing spiders — especially the young ones.

Fishing spiders have their own specially adapted spider wasp that hunts them and feeds them to its young. In the early 1900s, entomologists — including Missourian Phil Rau — noted an unusual sight: a wasp flying very low over a stream, dragging a spider across the surface film like a wind skier. It remained a mystery species among insect geeks until entomologist and nature writer Howard Ensign Evans identified it as Anoplius depressipes, one of the so-called blue-black spider wasps. It turns out this species hunts fishing spiders (Dolomedes spp.) and possesses specialized flattened front feet that are fringed with hairs, which allow it to walk on water, just like its prey. When transporting a spider, this species grasps the spider with its middle or hind legs, faces forward, then extends its forelegs and uses them like water skis while it propels itself and its prey across the top of the water, beating its wings, like an air boat in the Everglades. This spider wasp sometimes dives down into water to chase its prey, since water spiders often swim underwater when frightened. Not surprisingly, it nests in burrows in stream banks. 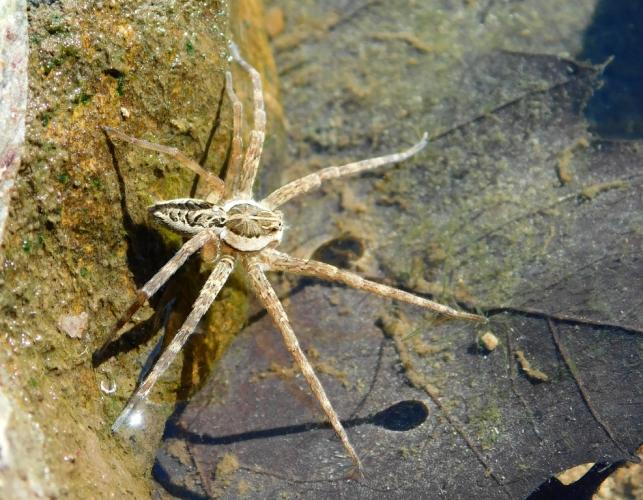 Caption
The striped fishing spider feels vibrations on the water surface to detect the movements of prey, then skates across the water to grab and subdue it. Like most other fishing spiders, it can also go underwater to capture small fish and other small aquatic animals.
Credit
Julianna Schroeder
Right to Use
1/1
Image 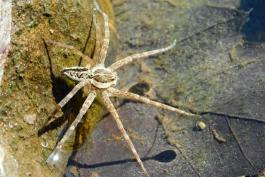 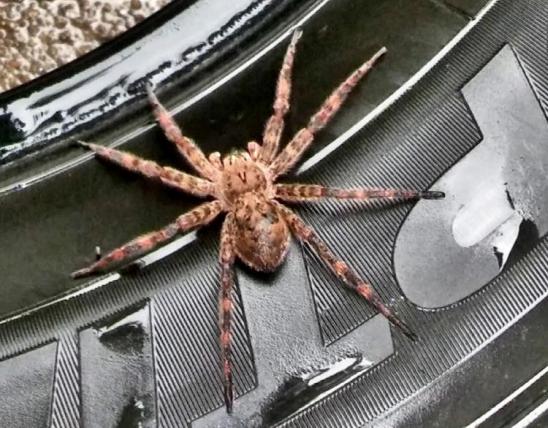 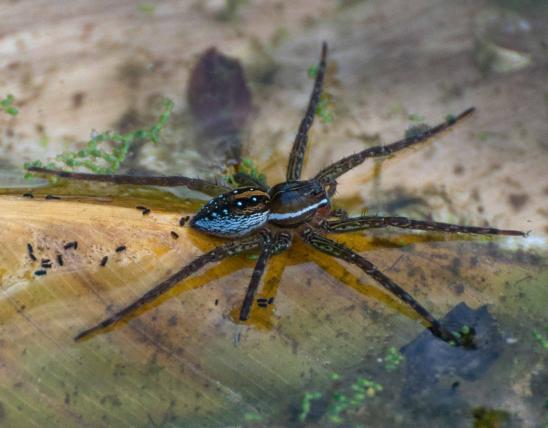 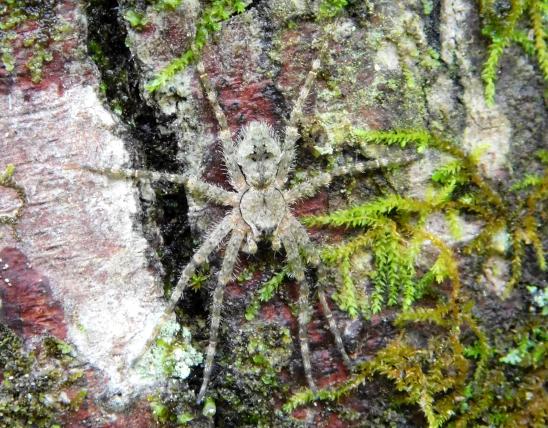 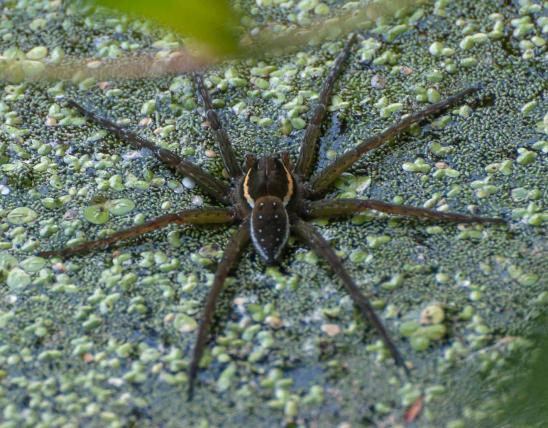 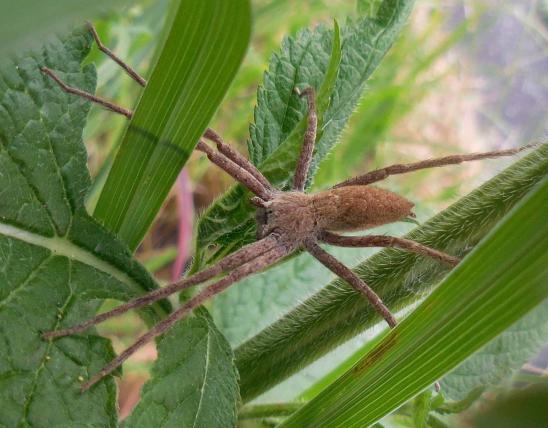 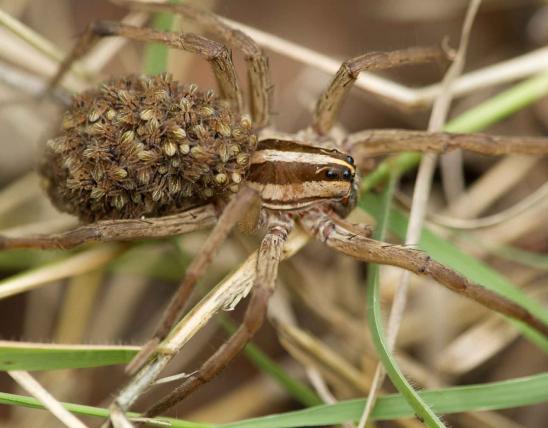 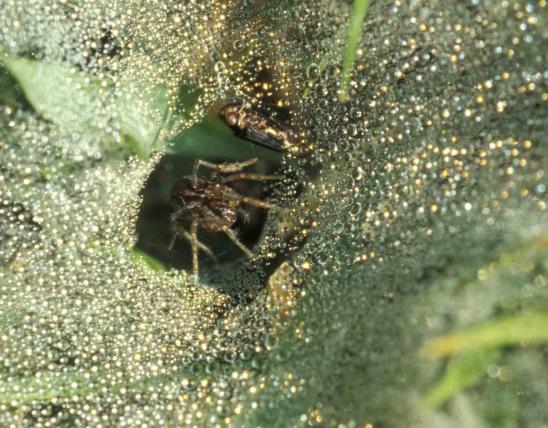 Grass Spiders
About Land Invertebrates in Missouri
Invertebrates are animals without backbones, including earthworms, slugs, snails, and arthropods. Arthropods—invertebrates with “jointed legs” — are a group of invertebrates that includes crayfish, shrimp, millipedes, centipedes, mites, spiders, and insects. There may be as many as 10 million species of insects alive on earth today, and they probably constitute more than 90 percent all animal species.