Seed bugs are named because most species in their family eat seeds. Included in this group of true bugs are the colorful milkweed bugs but also a number of less exciting brownish bugs. Like many other true bugs in the suborder Heteroptera, members of this family have an X on their backs caused by the way the wings fold together.

Below are some commonly seen members of this family.

The small milkweed bug (Lygaeus kalmii) is a widespread species usually found in open, grassy areas where its principal food plants (milkweeds) are growing. They eat a variety of foods, however, including flower nectar, sap from milkweed seeds, and a variety of scavenged foods. They are also predators of caterpillars as well as the adults, larvae, and pupae of flies, bees, and beetles. Apparently, once milkweed seeds are maturing around midseason, small milkweed bugs mainly eat them.

The large milkweed bug (Oncopeltus fasciatus), with its bold black and orange pattern, is one of the most beautiful of the true bugs. It is one of several species in its genus, with all having similar coloration but different patterns. Females deposit eggs in or among the pods of milkweed plants in groups of about 30 eggs. A single female can deposit more than 2,000 eggs during her adult life, which is about one month. Large milkweed bugs overwinter as adults, and they usually don't survive Missouri winters. Northern populations, including those in Missouri, are migratory. Adults fly south in fall, and our state is gradually repopulated each spring and summer from populations that survive winters to our south.

The white-crossed seed bug, or ragwort seed bug (Neacoryphus bicrucis), is another attractive insect, with a prominent thin-lined white X dividing zones of red and black. Apparently, it can survive on a variety of host plants, but groundsels and ragworts (Packera spp.; in the sunflower-daisy family), are a favorite. Like most other seed bugs, this insect usually is seen in open areas, where its food plants are abundant.

The sycamore seed bug (Belonochilus numenius) is an elongated, mottled brown bug with a proboscis (mouth tube) nearly as long as its body. It's named for its food and is widespread in the eastern United States.

Neortholomus scolopax (no common name) is another mottled brown seed bug with a widespread distribution. Common and sometimes abundant in dry grassy areas, apparently it is polyphagous (able to feed on a variety of plants).

Other Common Names
Lygaeids
Milkweed Bugs
Where To Find

Most seed bugs occur in grassy, open areas, such as prairies, old fields, and woodland/grassland borders, where there is a mixture of flowering plants.

Seed bugs occur where their specific food plants occur, with their abundance generally tied to the abundance of their food plants. Seed bugs that are limited to a narrower range of possible host species may have a more limited distribution. Other seed bugs, that can eat a broad range of plants, have a wider distribution.

Like all insects in the order Hemiptera (the true bugs), they have mouthparts adapted for sucking liquids; in this case, the insects pierce plants, notably developing or ripe, dry seeds or fruits, and suck nutrients in the form of plant juices. Some species may feed from leaves, flowers, or other plant parts.

This family of true bugs used to be a much larger group, but in 1997 the group was reorganized to reflect the true relationships among the different subfamilies: about half of what used to be included in family Lygaeidae were split away into their own families. References published before 1997 will reflect the former taxonomy.

True bugs undergo the simple form of metamorphosis, with eggs hatching into nymphs that look something like adults. They grow and molt a number of times, each time looking more and more like adults. Often you can see the wing buds on the backs of young individuals. The final molt produces the winged, sexually mature adult.

Some seed bugs are migratory, moving south for the winter, then returning north the following spring. Many species are multi-brooded, having more than one generation a year.

Some seed bugs are crop or garden pests, but most of them stick to native plants such as milkweeds and ragworts. They are an interesting and colorful part of the natural world.

Most of the seed bugs that sport contrasting black and bright red or orange colors are ones that feed on toxic plants. Their bodies are able to sequester the toxins so that a predator that eats them will be sickened. The bright colors are memorable, which helps to teach predators not to eat creatures that look like them in the future.

Biologists have described the red/orange and black coloration of milkweed-feeding insects as a mimicry complex. There are a wide variety of insects that feed on milkweeds and become distasteful, including monarch butterflies, milkweed bugs, milkweed longhorn beetles, milkweed leaf beetles, and milkweed tussock moth caterpillars. All of these are either orange and black or red and black, sending a clear message to would-be predators: "Don't eat me; I taste terrible."

Meanwhile, the seed bugs that are camouflaged with drab shades of tan and brown most likely are species that lack the protection of toxicity. 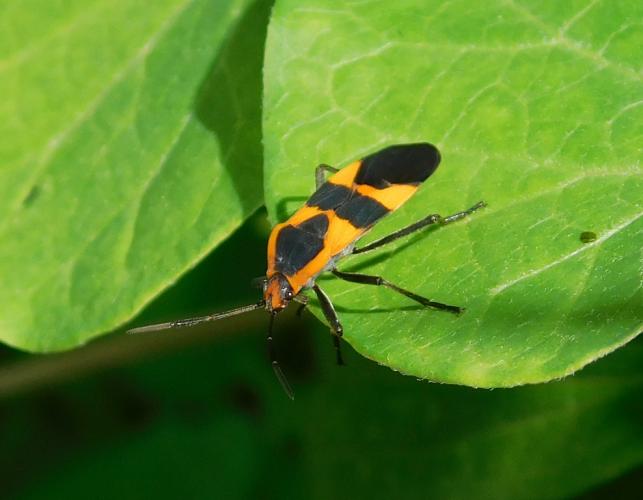 Caption
Large milkweed bugs are brightly colored and are some of our most beautiful representatives of the true bug order. But in the eyes of birds and other potential predators, their vivid orange-and-black pattern says “I will probably make you vomit.”
Credit
Julianna Schroeder
Right to Use
1/5
Image 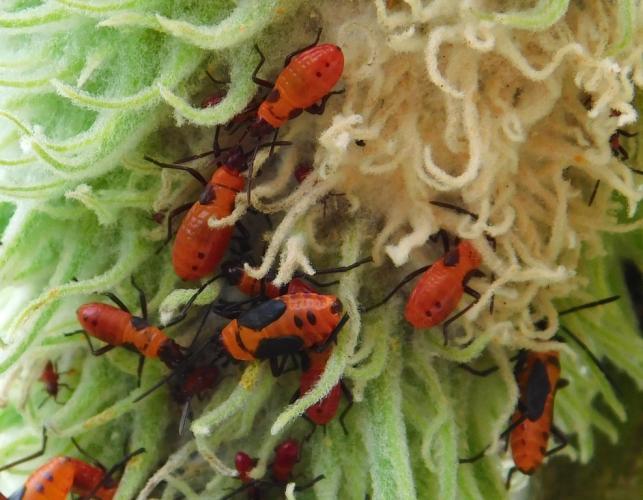 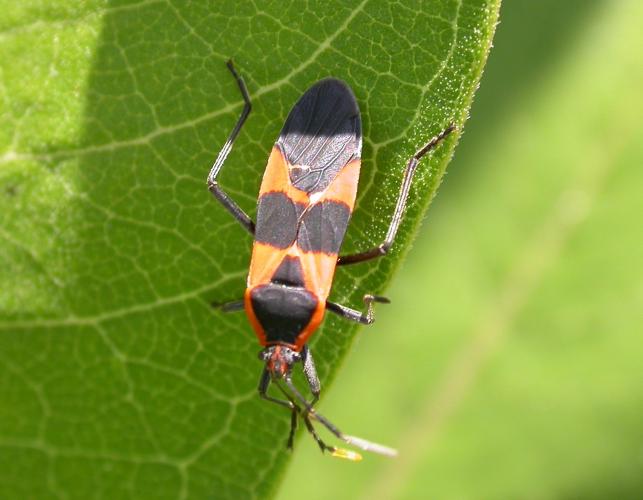 Caption
The large milkweed bug, with its bold black-and-orange pattern, is one of the most beautiful of the true bugs. Look for it on milkweeds, from midsummer through the first hard freeze.
Credit
Julianna Schroeder
Right to Use
3/5
Image 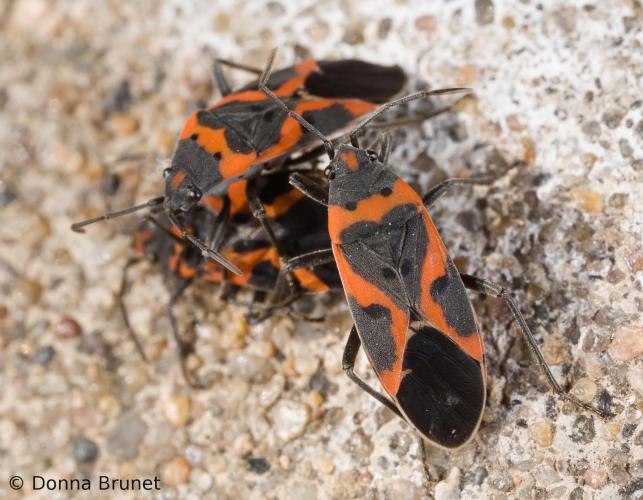 Caption
The small milkweed bug (Lygaeus kalmii) is one common type of seed bug. It is found on many more plants than just milkweeds.
Credit
Donna Brunet
Right to Use
4/5
Image 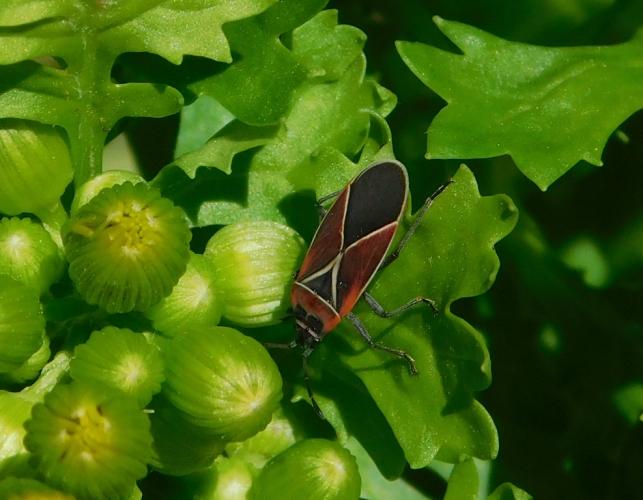 Caption
The white-crossed seed bug, or ragwort seed bug (Neacoryphus bicrucis), has handsome and distinctive markings. It can survive on a variety of host plants, but groundsels and ragworts (Packera spp.), are a favorite. This one is on a butterweed, Packera glabella.
Credit
Julianna Schroeder
Right to Use
5/5
Image 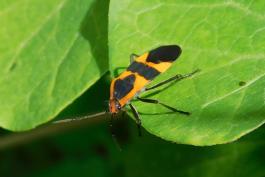 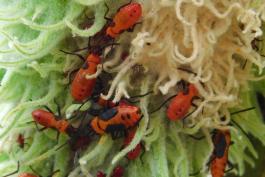 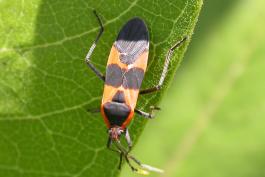 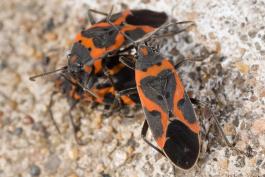 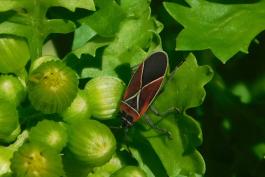 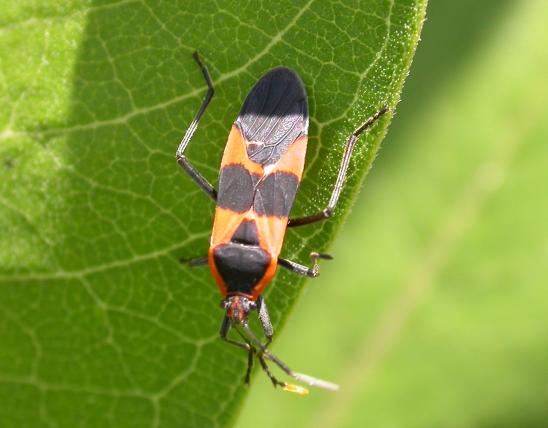 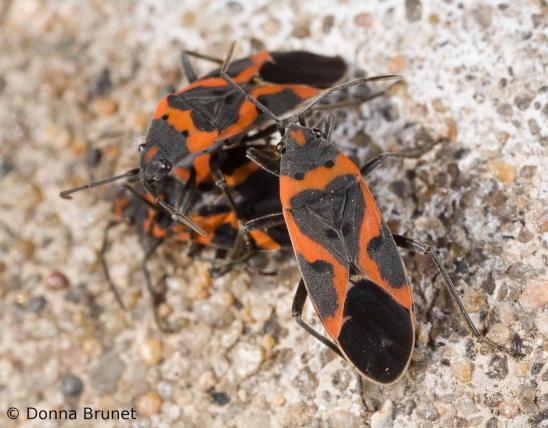 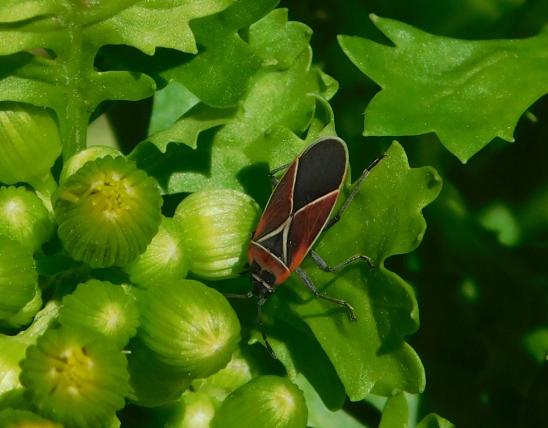 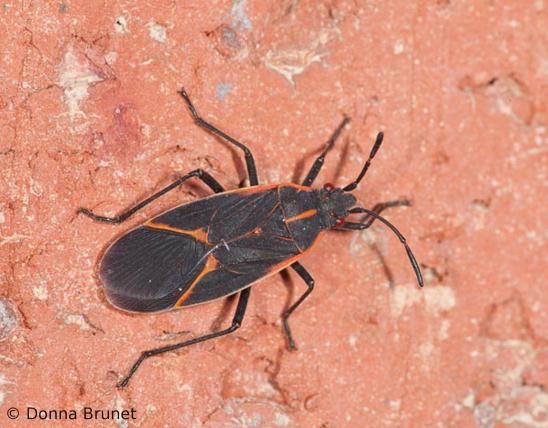 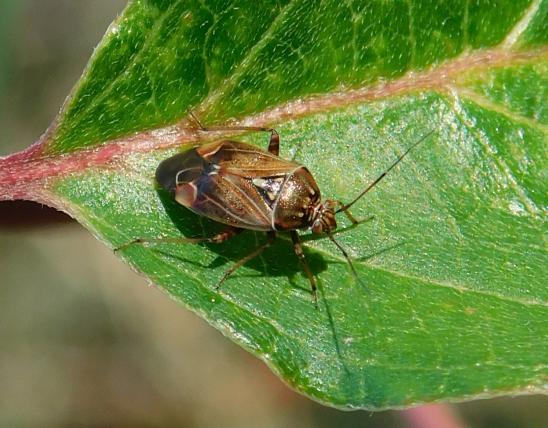 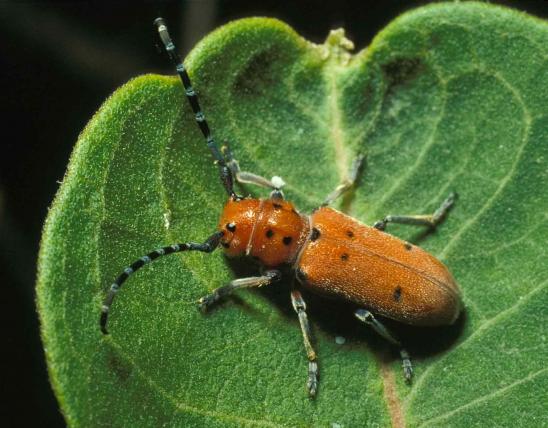 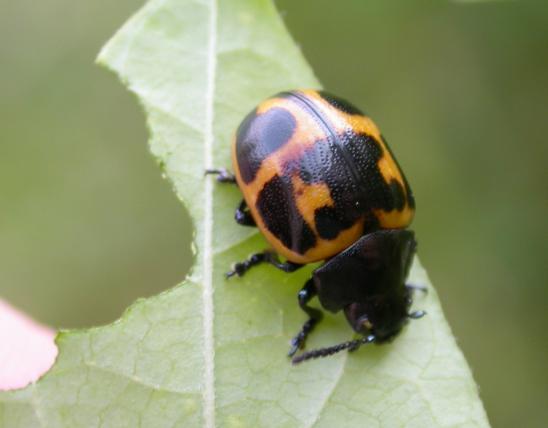 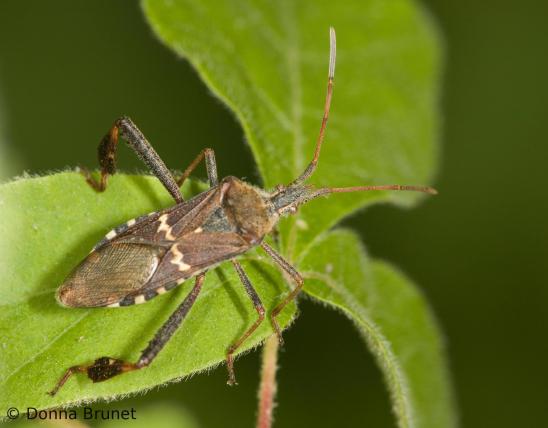 Leaf-Footed Bugs
About Land Invertebrates in Missouri
Invertebrates are animals without backbones, including earthworms, slugs, snails, and arthropods. Arthropods—invertebrates with “jointed legs” — are a group of invertebrates that includes crayfish, shrimp, millipedes, centipedes, mites, spiders, and insects. There may be as many as 10 million species of insects alive on earth today, and they probably constitute more than 90 percent all animal species.