During breeding season, upperparts of the rusty blackbird male are dull to lustrous green-black, with a pale yellow eye. Underparts are dull black. Upperparts of female are dark gray-brown, with a pale yellow eye. In fall and early winter, males have rusty edges to the feathers on the head, back, and most of the wings. Fall and winter females have a large buffy eyebrow and buffy underparts. Song is a squeaky hinge sound: oo-la-REE, the last syllable highest. Call is a sharp chack.

Similar species: The closely related Brewer’s blackbird (Euphagus cyanocephalus) is less common in Missouri. Males have a purplish sheen on the head and a greenish sheen on the body. Females are similar to female rusty blackbirds but instead have dark eyes (occasionally dark yellow). 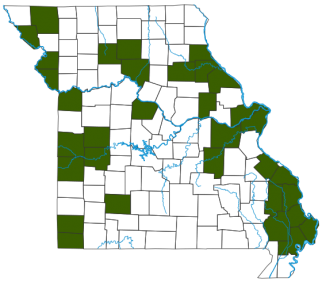 In Missouri, rusty blackbirds are most likely to be seen in spring or fall, during migration. Look for them in pastures and fields near water, swamps, and flooded woods. They are also sometimes seen at birdfeeders on snowy winter days and during migration.

Forages for insects, seeds, snails, and small fish, usually in pastures and fields near water, swamps, and flooded woods. They are also known to visit birdfeeders occasionally.

Common statewide transient; as a winter resident uncommon (southern Missouri) to rare (northern Missouri). Across North America, rusty blackbird populations have been declining sharply: 94 percent between 1966 and 2010. Causes for the steep decline are unknown, but researchers suspect loss of wet woodland habitat in the southeastern US wintering grounds (via drainage, clearcutting, and conversion of land to agriculture) as one possible cause. Mercury contamination might also be a cause.

In spring, rusty blackbirds migrate north into Canada for breeding. But in our state we can appreciate their cycle as they migrate in spring and fall. In addition to molting, some birds change color by feather wear. In early autumn, the fresh feathers of newly molted male rusty blackbirds have rusty tips, a color that assists with survival. During winter, the feather edges wear off, so only glossy black shows — the spring breeding coloration. Several other birds change color this way, too.

The decline of many, if not most, species is caused by destruction or fragmentation of their native habitat, which happens as humans alter the environment. As responsible stewards of the earth, we must keep in mind that our actions affect many species that cannot speak for themselves.

One theory for the decline of this species is that historic overhunting of beaver reduced the number of beaver ponds that rusty blackbirds relied on for habitat. As beaver populations recover, it might help rusty blackbirds. It is hard to predict how a decline of one species may impact another. 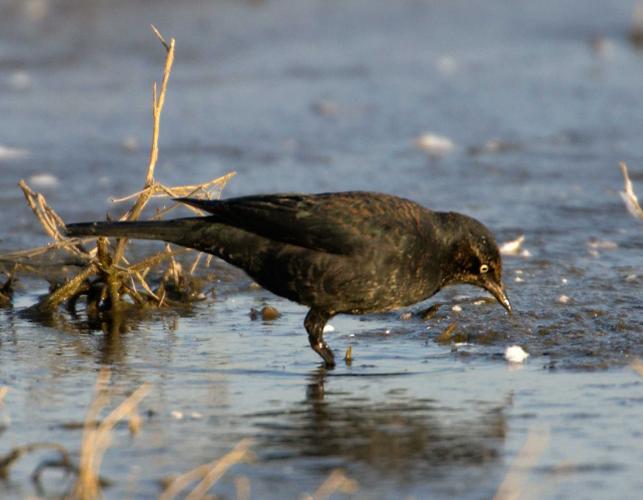 Caption
Judging by the predominance of black on this bird, this photo was probably taken in late winter, before rusty blackbirds fly north to Canada.
Credit
Jim Rathert
1/8
Image 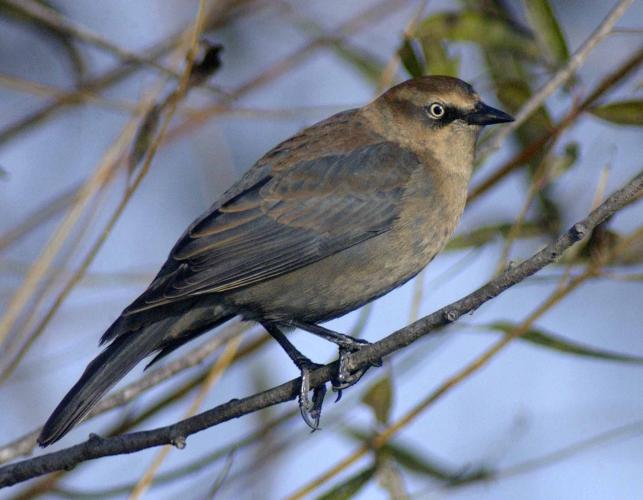 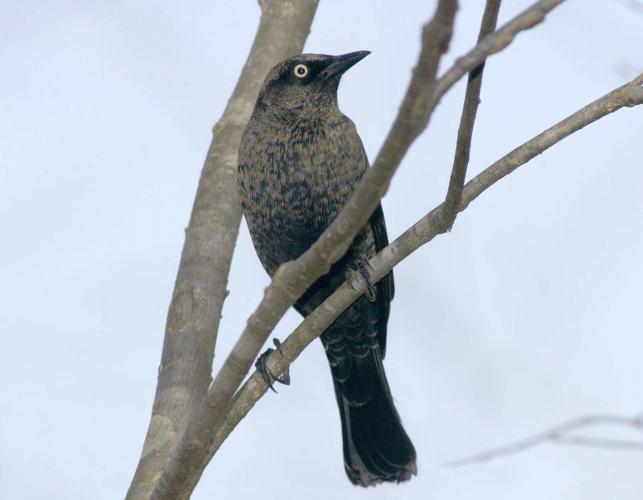 Caption
In Missouri, rusty blackbirds are commonly seen in spring or fall. Look for them in pastures and fields near water, swamps, and flooded woods.
Credit
Jim Rathert
3/8
Image 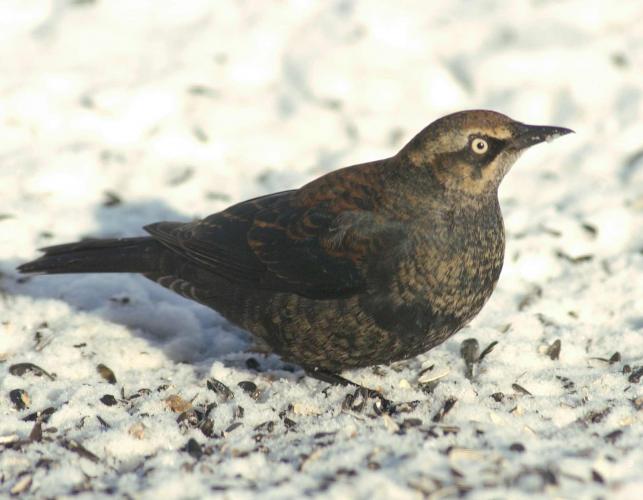 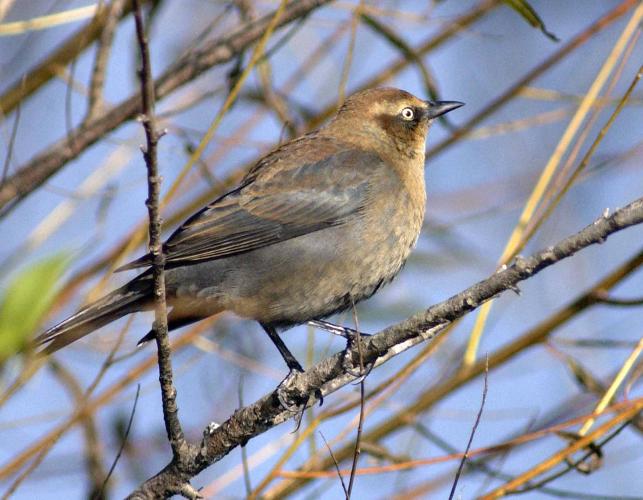 Caption
In spring, rusty blackbirds migrate north into Canada for breeding. They are not known to nest in Missouri.
Credit
Jim Rathert
5/8
Image 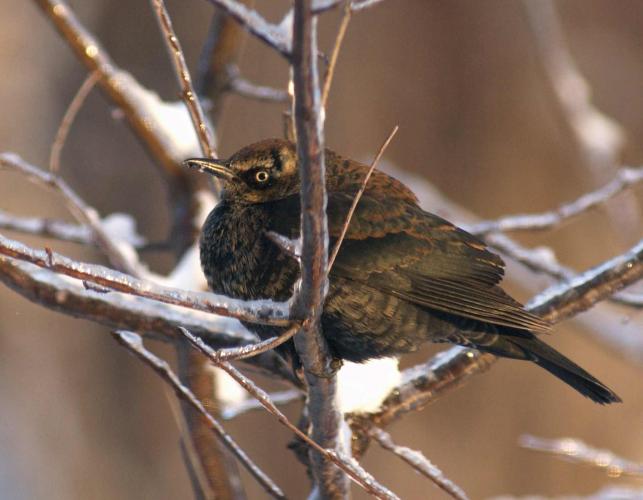 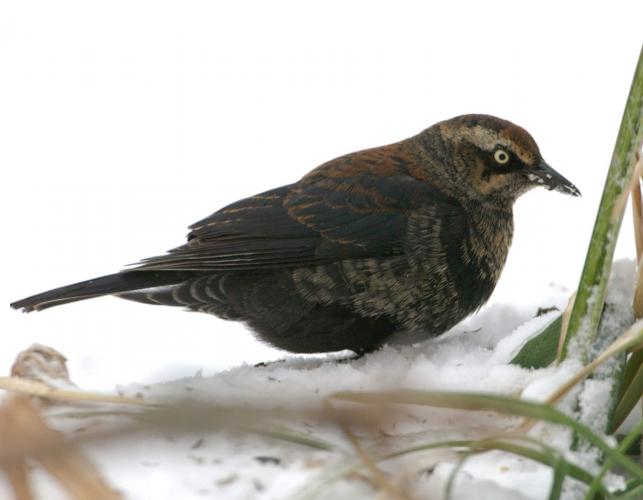 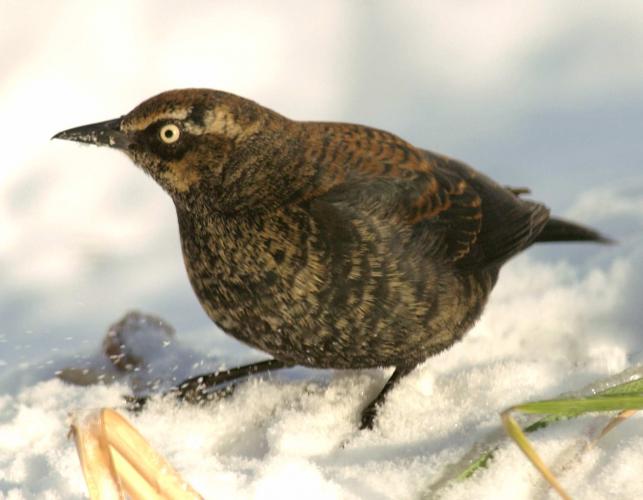 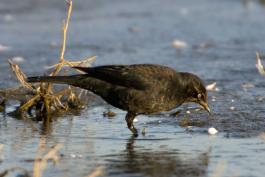 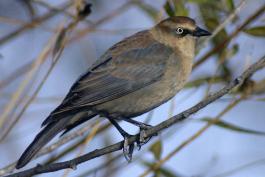 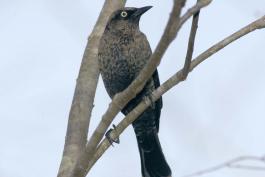 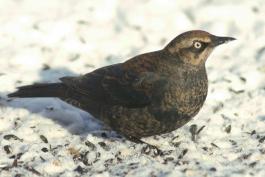 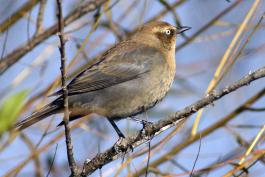 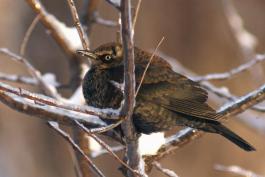 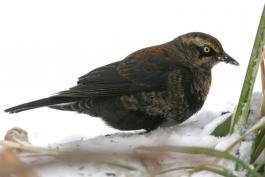 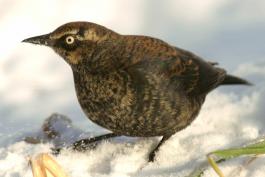