Lowbush blueberry is a low, stiffly branching shrub, ½–3 feet high, often growing in extensive colonies. Note that this is a variable species with differences in leaf size and degrees of hairiness on the leaves and twigs.

Leaves are alternate, simple, the blade ¾–1¾ inches long, ½–1 inch wide; the shape varies from oval to egg-shaped or broadest above the middle; the tip is blunt to pointed; the base is tapering; the margin is entire or finely toothed especially near the tip; the upper surface is pale green, glossy, somewhat more net-veined above than below, smooth; the lower surface is pale green, hairy or smooth; the leaf stalk is very short. Note that small leaves (bracts) are absent at the base of the flowers or fruit.

Twigs are rather loosely arranged, stiff, green to brown, rough with minute dots, hairy or smooth.

Flowers April–May, sometimes reflowers in October. In spring, it flowers when leaves are partly expanded, at the end of branches or from the old axils. Flowers are white to greenish white, often pinkish-tinged, or red, about ¼ inch long, cylinder-shaped, longer than broad; lobes 5, short, spreading to reflexed; stamens 10, not exceeding the petals.

Fruits late June–August, each berry is about ¼ inch across, dull dark blue to almost black with a faint whitish coating, globe-shaped, sweet, palatable, ripening throughout a long period; the seeds are many, glossy, reddish brown, pitted.

Similar species: Four species of Vaccinium (blueberries) have been recorded as native or naturalized in Missouri. In addition to lowbush blueberry, our other native blueberries are farkleberry (V. arboreum) and deerberry (V. stamineum). The fourth, highbush or swamp blueberry (V. corymbosum), is apparently introduced; it’s uncommon in our state, known from a historical collection of a possibly native occurrence in Newton County, and a more recent, introduced occurrence in Ste. Genevieve County, where fruit plantings apparently escaped from cultivation. It’s an important fruit crop in the eastern and midwestern United States.

Scattered to common, mostly south of the Missouri River.

The names and our understanding of the relationships among members of the blueberry genus have changed in the past half century. Although Missouri’s lowbush blueberry is today called V. pallidum, a prior understanding of the genus excluded that species from our state, and at that time, our species was designated as V. vacillans (sometimes as a distinct subspecies of V. vacillans). Today, the two species are considered one and the same. If you look in older references, you might find our species called V. vacillans.

Lowbush blueberry is prized for its sweet, edible berries. The berries ripen on the branches throughout a long period, making it more difficult to collect in quantity at any one time. You can eat the berries raw or cooked in pies, muffins, jelly, preserves, and jams.

Lowbush blueberry has been in cultivation since 1884.

Make jam or jelly as you would other berries. The basic idea for jelly is to boil the berries in enough water to cover; pour off the juicy liquid and add to it sugar (to taste) and pectin gelling agent; boil the liquid again until gelling starts; skim the foam from the top; and pour into jars.

Vaccinium is the classical Latin name for an Old World species; pallidum refers to the pale leaves.

Lowbush blueberry is closely related to the blueberries we know from jams, pies, muffins, and juices. In North America, several species in genus Vaccinium have been improved by plant breeders and are cultivated commercially, mostly in the northern and northeastern United States and Canada. These include the highbush blueberry (V. corymbosum), sweet lowbush blueberry (V. angustifolium), and cranberry (V. macrocarpon). Many other species of blueberry are harvested from the wild, including our lowbush blueberry. Missouri’s other native Vaccinium species are generally considered less tasty, but individual plants may yield good fruit.

If you’ve been to the American west, you may have seen shrubby or ground-hugging manzanitas (Arctostaphylos spp.) or mountain heaths or heathers (Phyllodoce spp.). They’re in the same family. The downturned urn- or bell-shaped flowers are very distinctive in this family. Learning plant families usually involves recognizing similar flower and fruit forms.

Because the berries ripen on the branches throughout a long period, a colony of lowbush blueberries is a reliable long-term food source for birds and small mammals.

Mammals that may eat the fruit include eastern cottontail, foxes, white-tailed deer, American black bear, chipmunks, mice, opossums, and raccoons. Deer and rabbits may browse the leaves and twigs.

The flowers of Vaccinium species have characteristics that prevent them from self-fertilizing. For example, the flowers are usually protandrous; that is, the stamens (pollen-bearing structures) mature first, with the styles (pollen-receiving structures) maturing later. The stigmas become receptive to pollen only after the pollen of their own blossom has been dispersed.

A wide range of insects feed on various parts of Vaccinium species — beetles, flies, true bugs including aphids and other sucking insects, and grasshoppers. In many cases, the insect is specialized for eating only members of the Vaccinium genus and their close relatives, and nothing else. 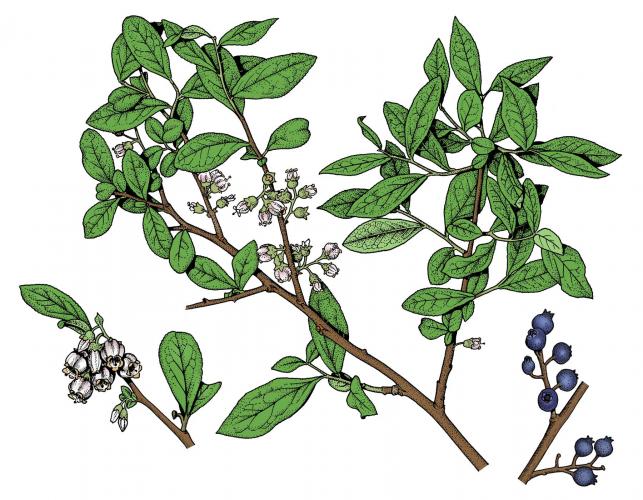 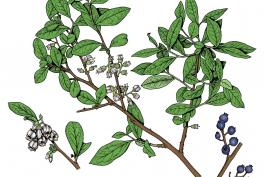 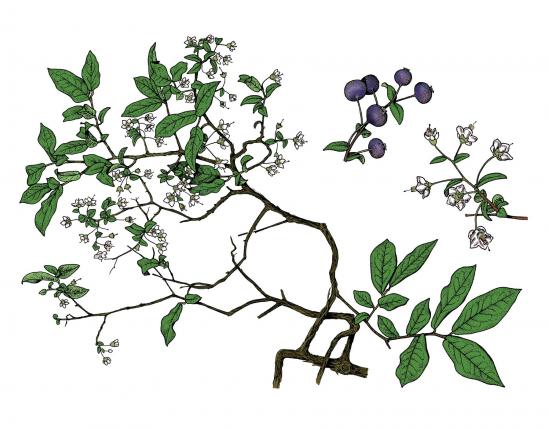 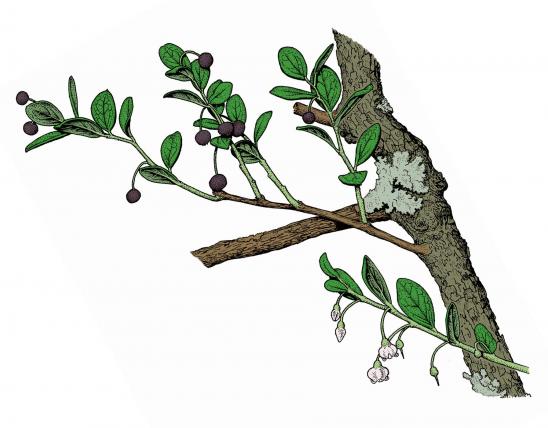 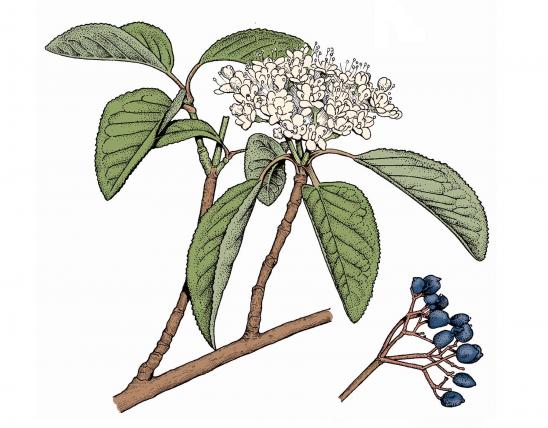 Common Blackberry
About Trees, Shrubs and Woody Vines in Missouri
There are no sharp dividing lines between trees, shrubs, and woody vines, or even between woody and nonwoody plants. “Wood” is a type of tissue made of cellulose and lignin that many plants develop as they mature — whether they are “woody” or not. Trees are woody plants over 13 feet tall with a single trunk. Shrubs are less than 13 feet tall, with multiple stems. Vines require support or else sprawl over the ground.