Katydids are a family of insects that may also be called longhorned grasshoppers, because of their super-long antennae. Many resemble green leaves, an effect accentuated by prominent veins on the outer wings. Others are brown. Populations of some species may be bright pink or yellow.

Other key identifiers for this family are:

There are 6 subfamilies of katydids in North America north of Mexico.

Katydids, like their relatives the crickets, are famous insect singers. The sound is produced as they rasp their wings together. The wings are often positioned to amplify the sound. The males sing to attract females and claim territory against other males. In some species, the females may call, too. The calls are unique to each species and can be used to tell species apart. Scientists use sonograms (graphic representations of the sounds, showing pitch and time) to describe and study the songs.

Some common Missouri species include:

Similar species: Other members of order Orthoptera include several families of grasshoppers, including the many types of short-horned grasshoppers, plus grouse locusts, crickets, hump-backed grigs, camel crickets, and mole crickets. None are likely to be confused with katydids.

The common true katydid is famous for singing from treetops at night. It almost always walks and rarely flies; gliding is more of its thing. Because it rarely leaves the canopy of trees, people usually never see it, although we hear it rasping loudly on late summer nights. In autumn, as the weather grows chilly, these insects become clumsy and may fall to earth. If you see a big green katydid when you're raking leaves in fall, it's probably this species.

To see Missouri's nifty-looking pink katydids, visit a native tallgrass prairie in summer. These pink populations are a form or race of the oblong-winged katydid (Amblycorypha oblongifolia), which is usually leaf-green. The color is caused by genetics, and populations with unusual colors are typically geographically isolated from others of their species. Recently, researchers discovered that pink is actually caused by a dominant gene, and green is a recessive trait: when pink and green individuals interbreed, at least 50 percent of their offspring are pink. Yet the majority of individuals in this species are expressing the recessive, green trait. Apparently, the green individuals predominate in most places because their camouflage works much better, and there are no pink individuals nearby with which to breed.

Most katydids eat plant material, especially leaves. A few species prey on insects or scavenge from a variety of materials.

Like other members of order Orthoptera (including the crickets and grasshoppers), katydids have simple development, with no great difference between juvenile and adult forms. Immature individuals are smaller and lack wings.

In several species, female katydids have remarkably long ovipositors (egg-laying appendages), which may look like curved knives or swords. These are not harmful to humans. They are used to deposit eggs.

Katydids may inflict some damage to crops, but generally their populations are low enough not to cause serious problems.

Large species of katydids, including coneheads and meadow katydids, have strong jaws and can give you a hearty nip. Handle with care.

Few people are aware of the diversity of insect singers that fill our summer days and nights with distinct, unique songs, as identifiable as the various bird songs.

This is what bird food looks like. Katydids are an important link in the food chain between plants and animals such as birds, reptiles, and many mammals, that hunt protein-rich, nutritious insects for a living. 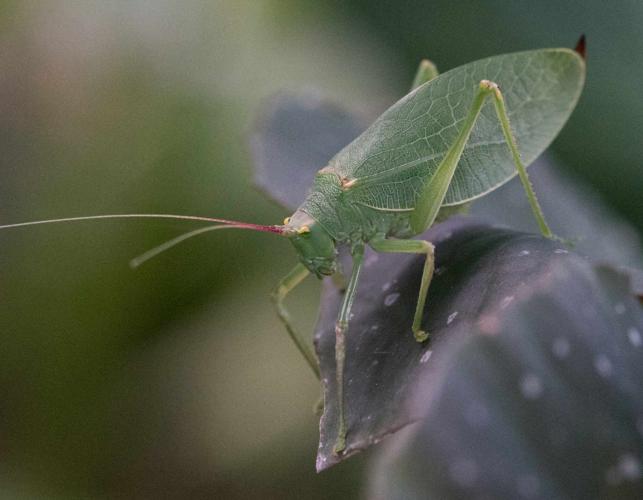 Caption
The green wings of the common true katydid look almost exactly like leaves. This is the species that loudy rasps "Katy did, Katy didn't" from trees on summer evenings.
Credit
Julianna Schroeder
Right to Use
1/8
Image 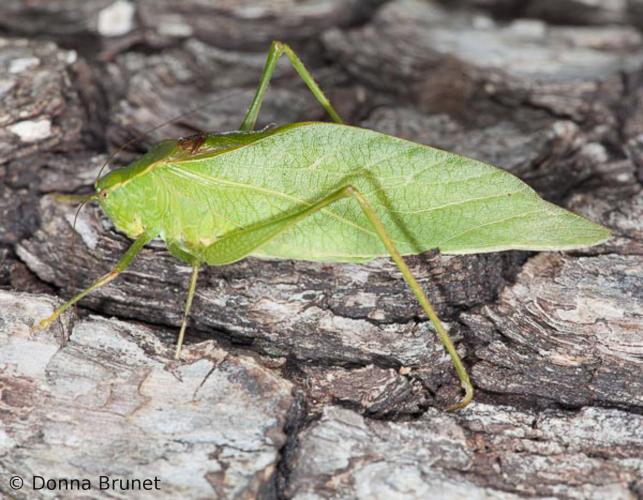 Caption
The lesser angle-winged katydid (Microcentrum retinerve) is one of our common species of katydids. Its song is a single 3-5-pulsed rattle, with about a second of silence between each rattle.
Credit
Donna Brunet
Right to Use
2/8
Image 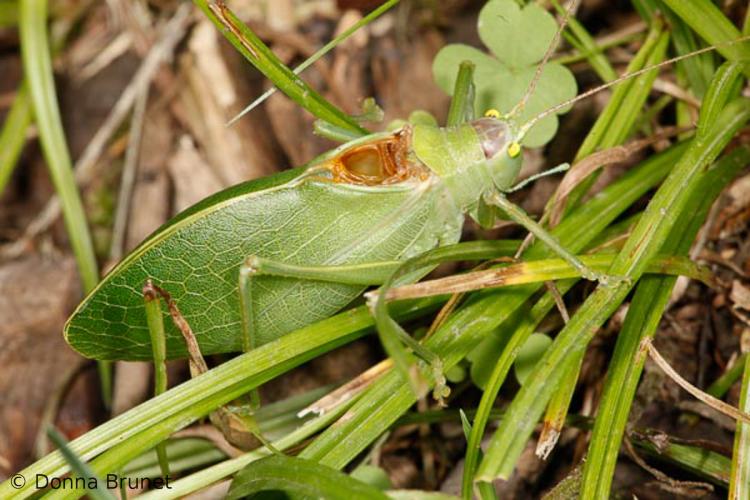 Caption
The common true katydid is a master mimic. Its bright green color matches surrounding leaves, and its wings are veined like leaves as well.
Credit
Donna Brunet
Right to Use
3/8
Image 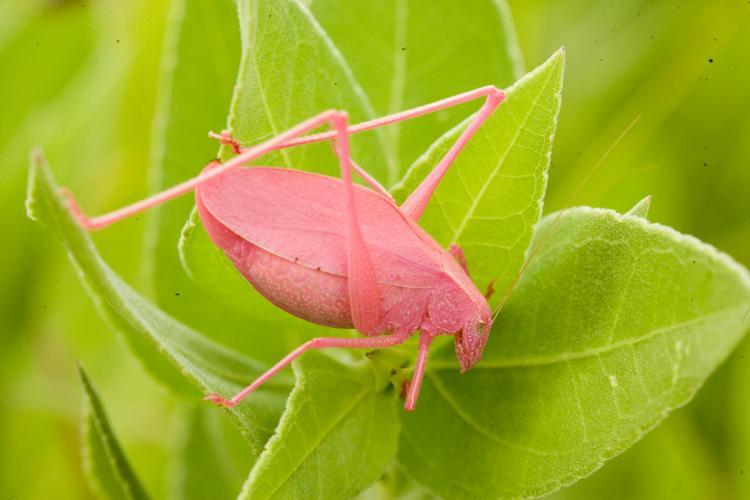 Caption
To see Missouri's pink katydids, visit a native tallgrass prairie in summer. The pink populations are a form or race of the oblong-winged katydid (Amblycorypha oblongifolia), which is usually leaf-green. The pink color is actually a genetically dominant trait in this species.
Credit
David Stonner
Right to Use
4/8
Image 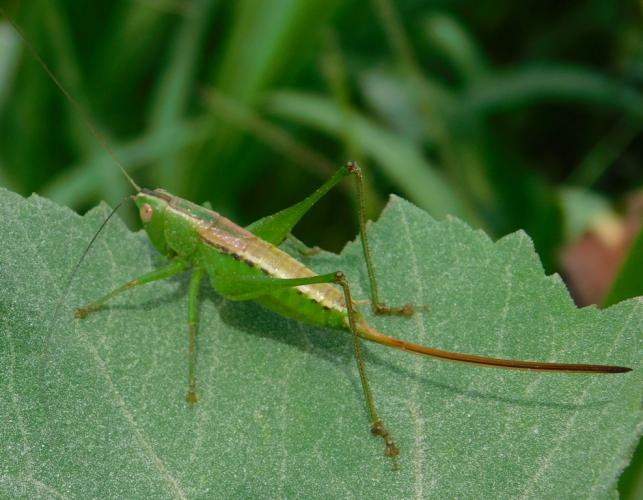 Caption
The straight-lanced meadow katydid (Conocephalus strictus) is common in pastures, roadsides, and crop lands. The female's swordlike ovipositor is longer than the rest of her body.
Credit
Julianna Schroeder
Right to Use
5/8
Image 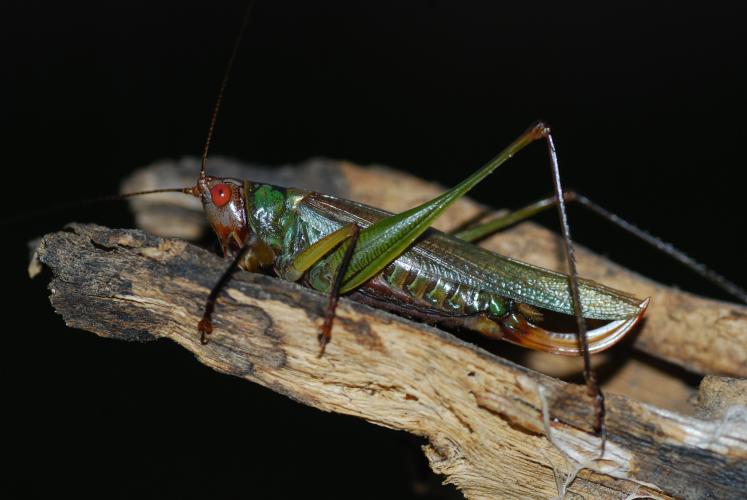 Caption
The black-legged meadow katydid (Orchelimum nigripes) is a strikingly marked katydid that hides among foliage. It is secretive and quick to hop away or move to the other side of a plant stem.
Credit
Shelly Cox
Right to Use
6/8
Image 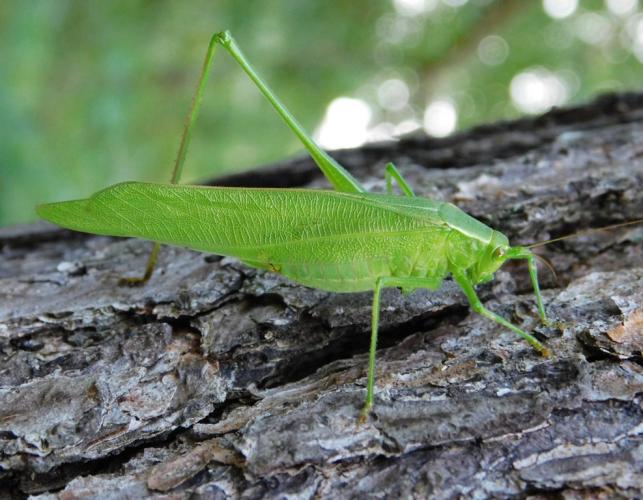 Caption
The fork-tailed bush katydid (Scudderia furcata) ranges throughout the Lower 48. Its call is a simple "tsip!" given every few seconds. It and others in its genus are called bush katydids because they are most common in bushes, thickets, and other shrubby areas.
Credit
Julianna Schroeder
Right to Use
7/8
Image 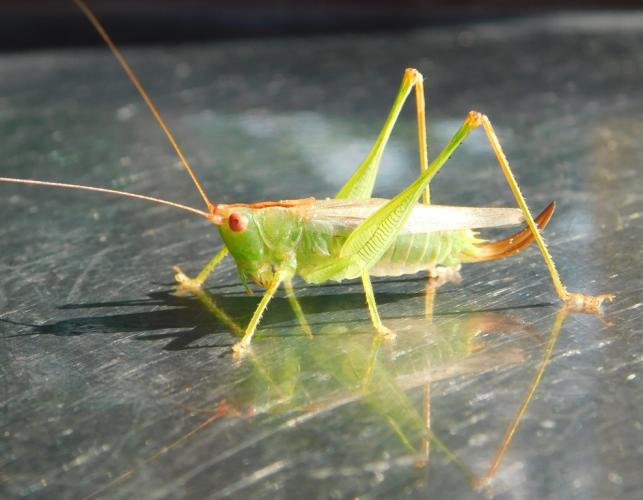 Caption
The common meadow katydid is well-known and widespread in the eastern United States. Listen for its distinctive call — like a pulsating circular lawn sprinkler ratcheting around — in midsummer to the first hard frost.
Credit
Julianna Schroeder
Right to Use
8/8
Image 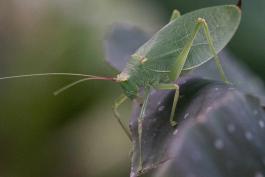 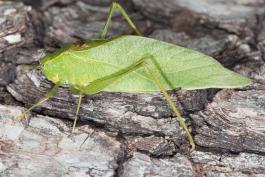 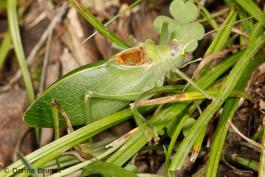 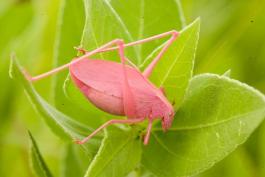 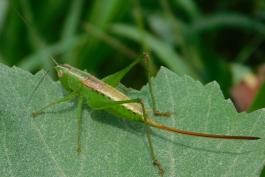 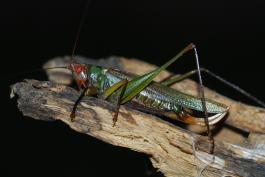 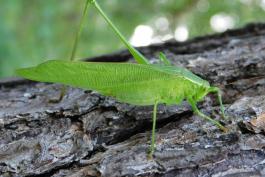 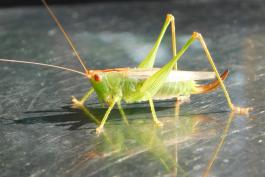 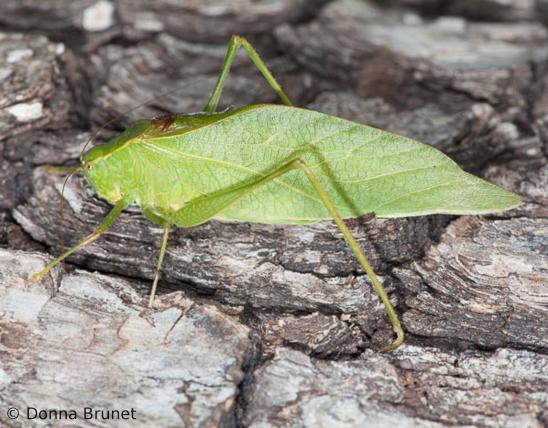 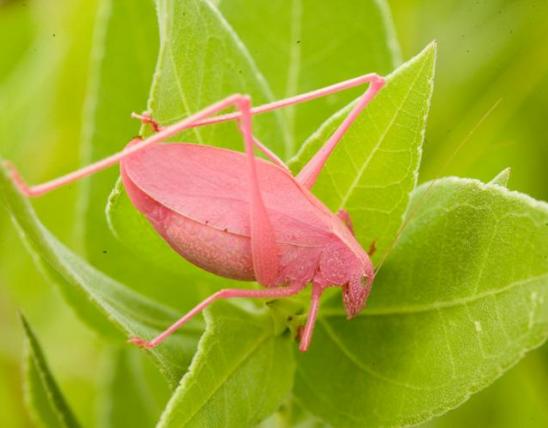 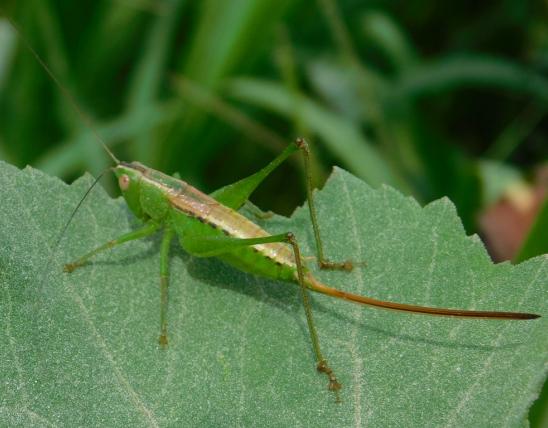 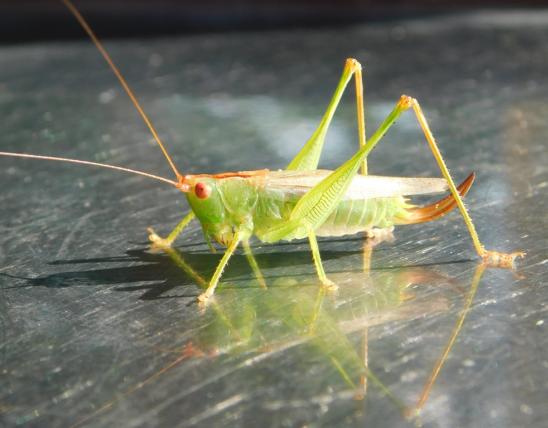 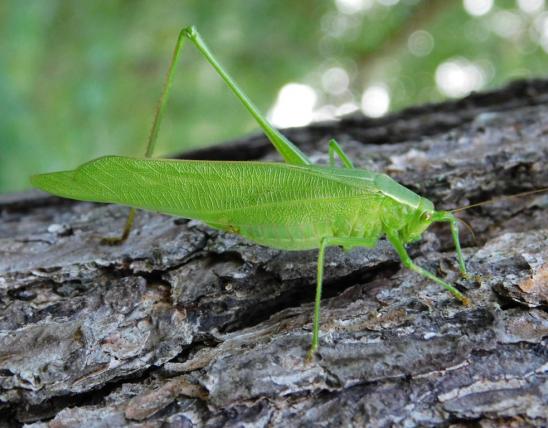 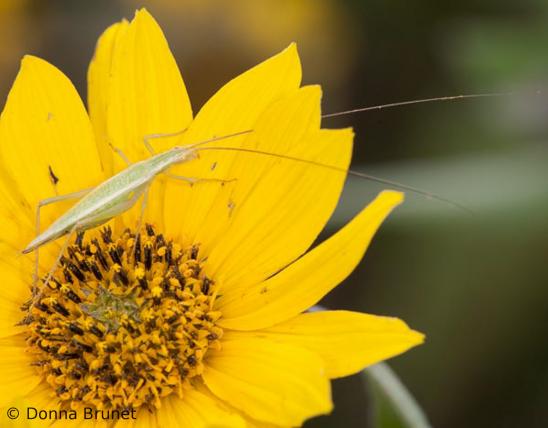 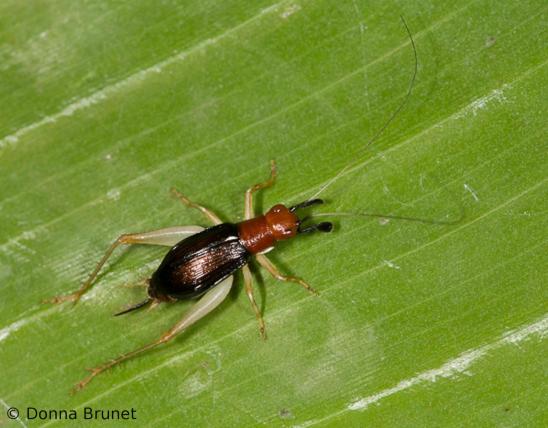 Handsome Trig (Red-Headed Bush Cricket)
About Land Invertebrates in Missouri
Invertebrates are animals without backbones, including earthworms, slugs, snails, and arthropods. Arthropods—invertebrates with “jointed legs” — are a group of invertebrates that includes crayfish, shrimp, millipedes, centipedes, mites, spiders, and insects. There may be as many as 10 million species of insects alive on earth today, and they probably constitute more than 90 percent all animal species.