Downy gentian, or prairie gentian, is a beautifully blue or violet-blue wildflower with opposite leaves that blooms September through November in native grasslands. It is a perennial wildflower with erect or ascending stems that are minutely hairy, usually in lengthwise lines up the stem. The fine, white hairs, which give this plant its name, can be hard to see.

The stem leaves are opposite, simple, lance-shaped, and stalkless. It’s hard to see, but the leaves are minutely hairy along the edge of the basal part of the blade, and along the larger veins on the leaf underside. The smaller leaves at the top of the plant are whorled on the stem.

Flowers arise in clusters of individual flowers at the tops of the plant stalks; petals are fused into a funnel-shaped tube, with the free portion of the outer lobes spreading at maturity, blue to bluish violet, sometimes darkening with age. Blooms September–November.

Similar species: Several members of the gentian family live in Missouri, including two others in the genus Gentiana: closed gentian, or bottle gentian (G. andrewsii), and pale, white, or yellowish gentian (G. alba). Both have the free portion of the petal lobes inconspicuous, so that the flowers generally appear to be closed but inflated and rather bottle-like; the stems of both are glabrous (smooth; hairless). G. andrewsii has blue to violet-blue petals, while G. alba has white to greenish- to yellowish-tinged petals. At maturity, G. alba’s petal lobes open, but they remain inconspicuous.

Downy gentian can interbreed and form hybrids with G. alba; these offspring are called G. x curtisii and have been documented from certain locations in Adair and Franklin counties where the two parent species grow near each other. The hybrid plants show characteristics intermediate between the parent plants.

Scattered nearly statewide, except for the Bootheel lowlands.

Occurs in upland prairies, savannas, and glades, usually on calcareous substrates. It is not a common plant, but it is rather widespread statewide.

Gentian blue is so vivid, eye-catching, and rich that it is the name of a color. But not all gentian flowers are blue; it varies with species, and many have white, yellowish, or greenish flowers.

Worldwide, the gentian family includes some 80 genera, with more than a thousand species. Many are cultivated as ornamentals or have been used medicinally, especially for digestive upset. The species that are typically used medicinally are European gentians (G. lutea, G. purpurea, G. punctata, and G. pannonica).

Several liqueurs, apéritifs, tonics, and bitters are made with extracts of certain gentian species, usually of roots. You might have heard of Aperol, Suze, Angostura bitters, and Peychaud’s. The root beer–like soft drink Moxie, a favorite soda in New England, also uses bitter gentian root extract as a flavoring. The species most used in beverages is great yellow gentian, G. lutea, a native of Europe.

The foliage of gentians is bitter, so the plants are not palatable to most grazing mammals. Because these plants are rarely abundant, they could not form a large part of grazing animals’ diet, anyway.

In Europe, there’s a butterfly with an amazingly complex ecology involving gentians and various species of host ants. The butterfly is the alcon blue, Phengaris alcon (it looks a lot like our spring or summer azures). Its eggs are laid on a gentian plant. Upon hatching, the caterpillars feed on the gentian, but as they grow older, they move to the ground, where ants find them. The caterpillars emit a chemical that replicates the scent of ant larvae, so the ants carry the caterpillars to the nursery chambers of their own nest. There, the ants feed the caterpillars as if they were their own young. (It’s a lot like what brown-headed cowbirds do to their hosts.) This story grows more complex when parasitoid ichneumon wasps blast into the ant nests seeking the butterfly caterpillars . . . but we’ll let you find more about that elsewhere. 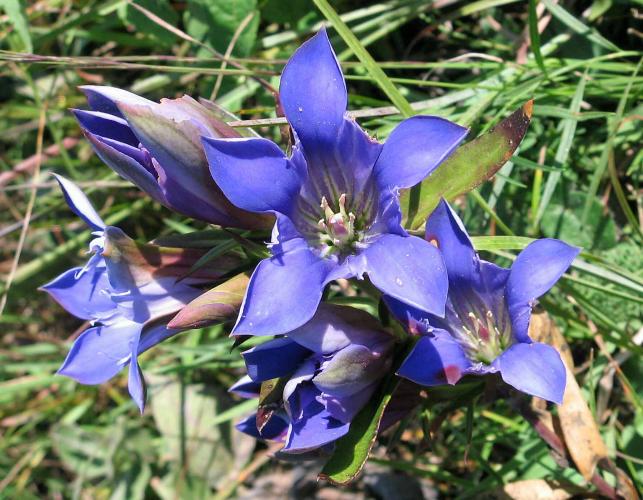 Caption
The flowers of downy gentian arise in clusters of individual flowers at the tops of the plant stalks. This species blooms September–November.
Credit
Malissa Briggler
Right to Use
1/8
Image 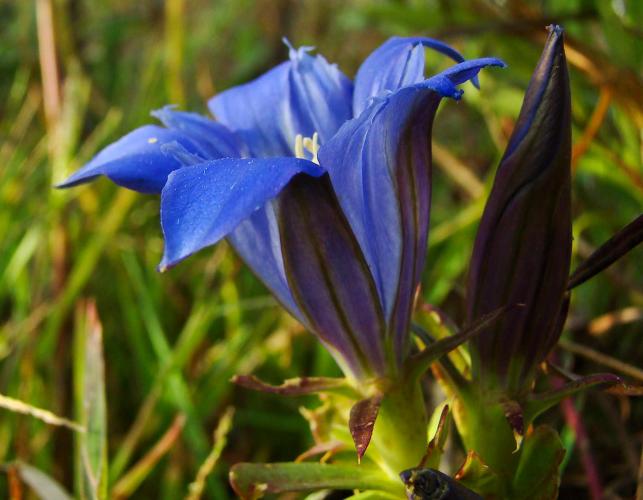 Caption
Downy gentian’s petals are fused into a funnel-shaped tube, with the free portion of the outer lobes spreading at maturity.
Credit
Susan Farrington
Right to Use
2/8
Image 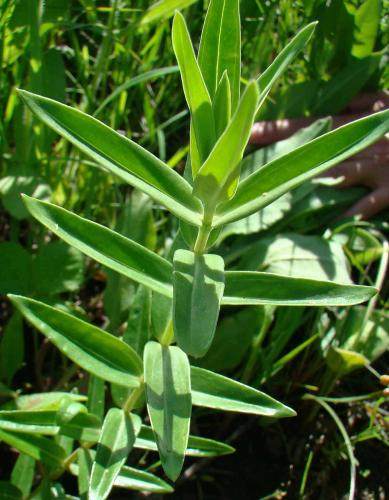 Caption
The stem leaves of downy gentian are opposite, simple, lance-shaped, and stalkless.
Credit
Susan Farrington
Right to Use
3/8
Image 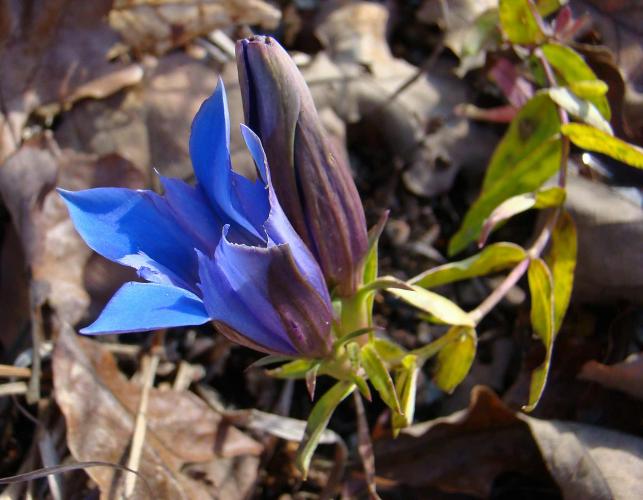 Caption
Downy gentian, also called prairie gentian, occurs in upland prairies, savannas, and glades, usually on calcareous substrates. It is not a common plant, but it is rather widespread statewide.
Credit
Susan Farrington
Right to Use
4/8
Image 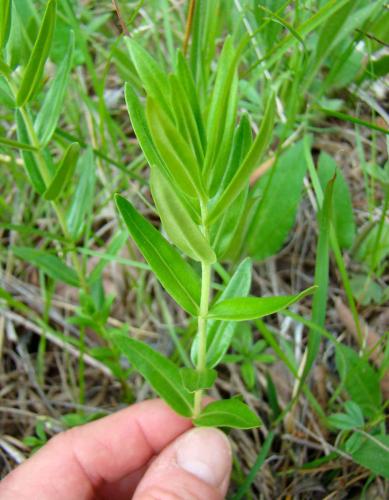 Caption
It’s hard to see, but the leaves of downy gentian are minutely hairy along the edge of the basal part of the blade, and along the larger veins on the leaf underside. These tiny white hairs are what give the plant its common name of “downy.”
Credit
Susan Farrington
Right to Use
5/8
Image 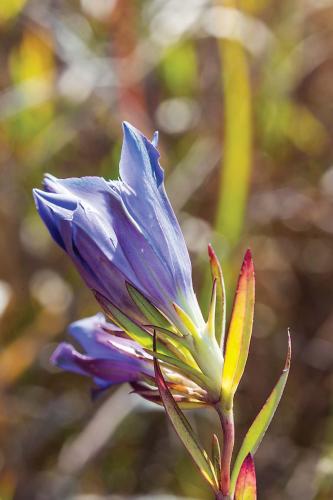 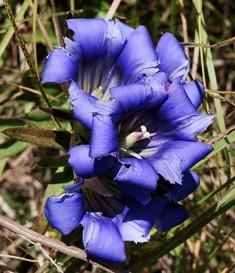 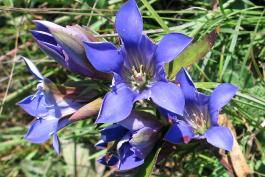 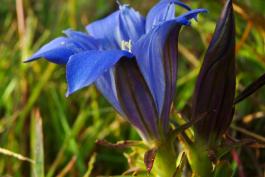 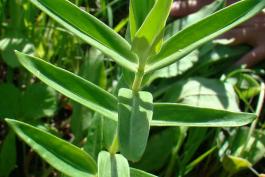 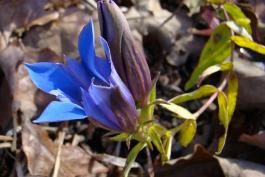 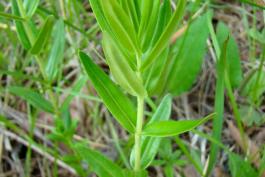 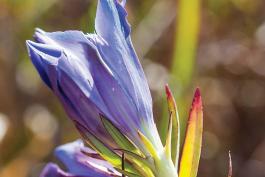 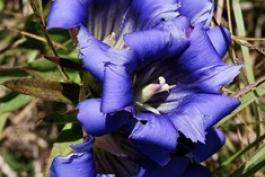 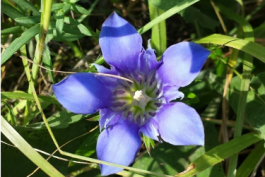 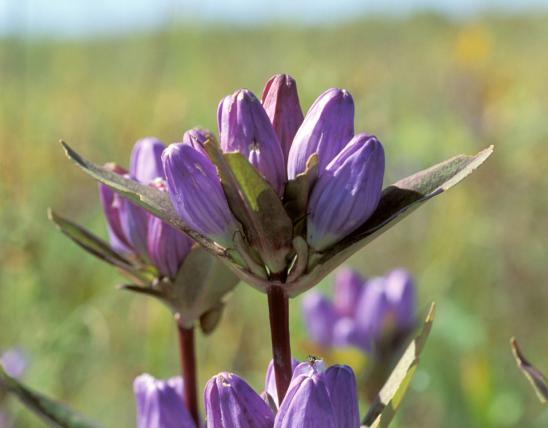 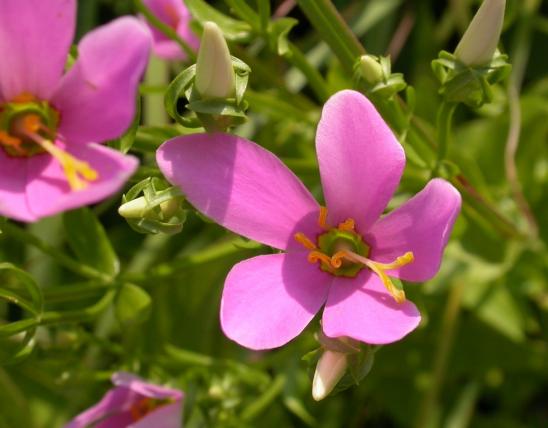 Rose-Pink (Rose Gentian)
About Wildflowers, Grasses and Other Nonwoody Plants in Missouri
A very simple way of thinking about the green world is to divide the vascular plants into two groups: woody and nonwoody (or herbaceous). But this is an artificial division; many plant families include some species that are woody and some that are not. The diversity of nonwoody vascular plants is staggering! Think of all the ferns, grasses, sedges, lilies, peas, sunflowers, nightshades, milkweeds, mustards, mints, and mallows — weeds and wildflowers — and many more!