The common claybank tiger beetle, also called the green-margined tiger beetle, is one of several tiger beetles that occur in Missouri. Overall color of adults ranges from brick red to green to purplish to purplish brown. Often, the outer and inner edges of the elytra are highlighted with shiny green (hence one of the common names). The light markings on the elytra (pair of “shells” on the back), when present, are helpful for IDs: The middle marking on the elytra is most typically sharply angled, like an L, and often touches the outer margin; though sometimes it’s only a dash. There is sometimes a light spot on the outer front part of the elytron, near the edge. The paired spots at the hind tip of the elytra may be long or short. The legs, sides, and the area between the eyes are hairy.

The larvae of this and other tiger beetles are pale or tan and grublike, with six legs, and have strong pincers at the mouth. There’s usually a hump behind the rather large head. They dig holes down into the ground and rest near the entrance.

Learn more about this and other tiger beetles on their group page.

Similar species: The cow path tiger beetle, or purple tiger beetle (Cincindela purpurea) is quite similar, though generally less common. It also has a range of overall colorations (from purple to green, including greenish purple and bronzish intermediates; some are nearly black). The pair of markings midway down the back are curved or angled, but they are not sharply bent like an L; these marks do not touch the outer edge of the elytron. There is not a light spot on the outer front part of the elytron. The paired spots at the tip of the elytra are short. The legs, sides, and the area between the eyes are hairy.

Adult length: about ¾ inch (not counting appendages such as antennae and legs).

Typically seen in open, upland, steep, bare-clay habitats, including dirt trails and roads through grasslands and pastures and near river and stream banks. Usually seen in spring (April, May, and June) and again in late August to the end of September. See Life Cycle below for an explanation of their two- or three-year life cycle.

An individual of this species may live for two or three years. Adults usually emerge from their pupae in late summer but many do not appear aboveground until springtime. Look for them mating in dirt paths and other bare-ground areas in spring, especially in April. After mating and laying eggs, the adults die. The eggs hatch and the grublike larvae live in burrows that can be several inches underground, hunting insects that come near. They grow and undergo a number of molts. They overwinter as dormant larvae, then become active again the following spring. They pupate in midsummer. Some emerge as adults in late summer, but others stay underground until the following spring. 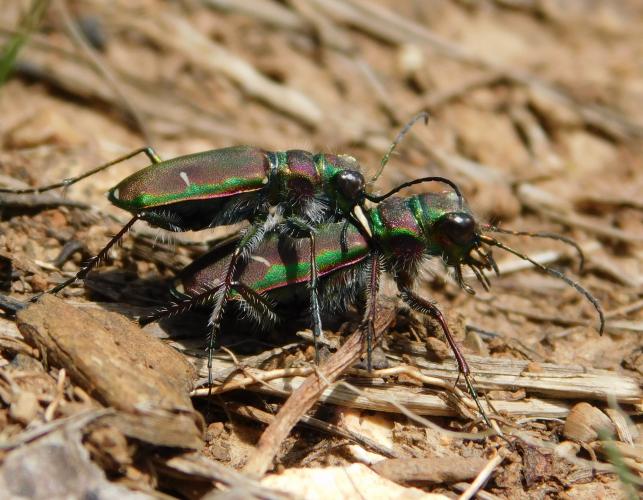 Caption
The overall color of adult common claybank tiger beetles ranges from brick red to green to purplish to purplish brown. Often, the outer and inner edges of the elytra are highlighted with shiny green, hence the common name green-margined tiger beetle.
Credit
Julianna Schroeder
Right to Use
1/2
Image 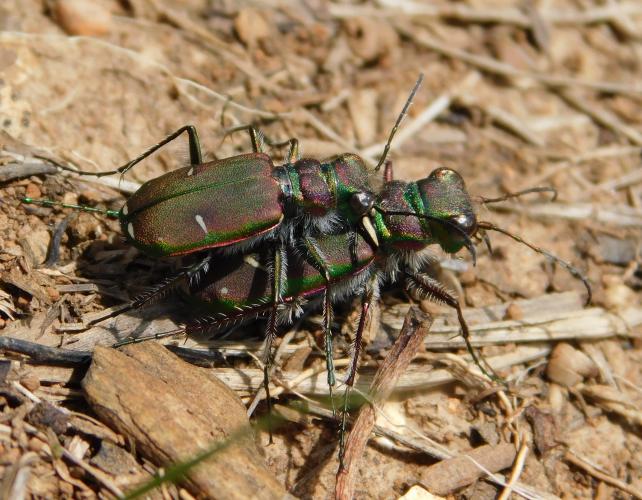 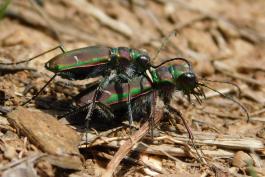 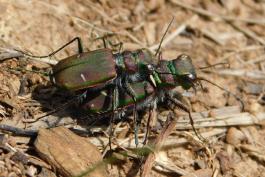 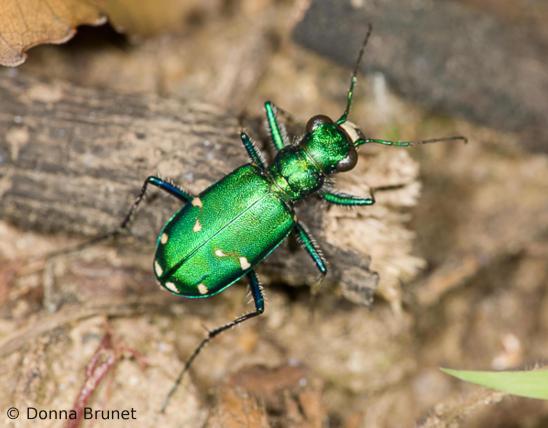 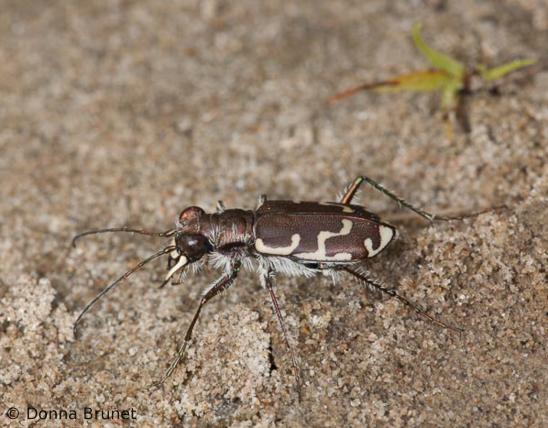 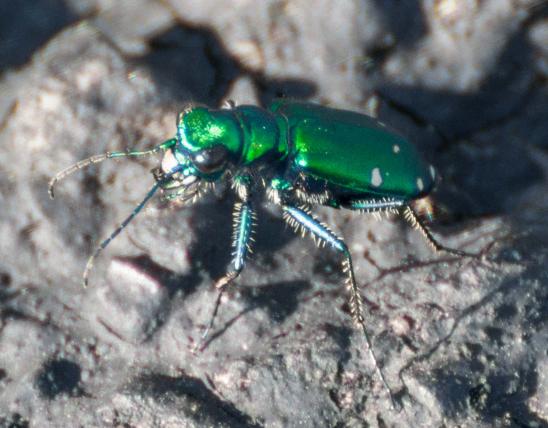 Ground Beetles (Carabids)
About Land Invertebrates in Missouri
Invertebrates are animals without backbones, including earthworms, slugs, snails, and arthropods. Arthropods—invertebrates with “jointed legs” — are a group of invertebrates that includes crayfish, shrimp, millipedes, centipedes, mites, spiders, and insects. There may be as many as 10 million species of insects alive on earth today, and they probably constitute more than 90 percent all animal species.