Canada wild rye is a native perennial tuft-forming, cool-season midgrass usually reaching about 3–5 feet in height. It generally has fibrous roots, usually lacking rhizomes. The stems and leaves may be green or bluish green; they are hairless, sometimes with a whitish, waxy coating.

Leaf blades are spearlike, flat, 4–14 inches long, and to ½ inch wide; a pair of earlike structures (auricles) are usually noticeable where the leaf blade clasps the stem.

Flowering heads are bristly and generally resemble those of wheat or rye; when mature, they nod and sway in the breeze. They are usually 3–8 inches long, usually arched or nodding (hence the common name “nodding wild rye”), with usually 2 spikelets per node. Each spikelet points upward at an angle and has 3–5 florets. Spikelets are tipped with bristly awns; these may be about 1 inch long and usually curve outward at maturity. Flowers June–October.

Similar species: Some 12 species in genus Elymus have been recorded for Missouri. Wild ryes are in a subdivision (tribe) of the grass family along with many familiar and similar-looking genera, including goat grass, crested wheatgrass, barley, rye, and wheat. While most people use the form, size, and shape of roots, stalks, leaves, flowers, and fruits to distinguish among plants, botanists today are using molecular (DNA) characteristics to organize this tribe of grasses.

Virginia wild rye (E. virginicus) is one of the more common of Missouri’s other wild ryes. It can be distinguished from Canada wild rye by its rather erect (not nodding) seedheads, and by the rather straight (not curving) awns on its mature seedheads. It is generally not as tall or robust as Canada wild rye.

Note that Canada wild rye may sometimes hybridize with other grasses in its genus, and the offspring may have characteristics intermediate between the two parent plants. Virginia wild rye apparently is one of the species it can form hybrids with; the offspring are called E. xmaltei.

Scattered nearly throughout the state, but more common north of the Missouri River.

Canada wild rye is considered highly desirable as forage or hay for livestock. The spiny mature seed heads, however, may injure the mouths of grazing animals.

It is also included in seed mixtures that are used to revegetate roadsides after construction projects or in other places where erosion needs to be prevented. Cultivars especially for these purposes have been developed.

It can be used in flower arrangements, as the flower heads look interesting from summer through winter.

In cultivation, be careful with its ability to spread via seeds; it’s probably not a good choice for manicured gardens. But it can be a good, drought-tolerant native ground cover on slopes and for preventing erosion.

Apparently the seed of Canada wild rye was used as a cereal grain and ground into a flour by some groups of Native Americans.

Herbivorous mammals, such as deer and rabbits, eat the tender young leaves, but as with domestic livestock, the spiky mature seed heads probably are less appealing.

This is one of many kinds of grasses that spread by tillering. A tiller is a new shoot that develops beside its parent, arising from the root system. This is how many of the so-called bunch grasses grow into tufts or clumps. 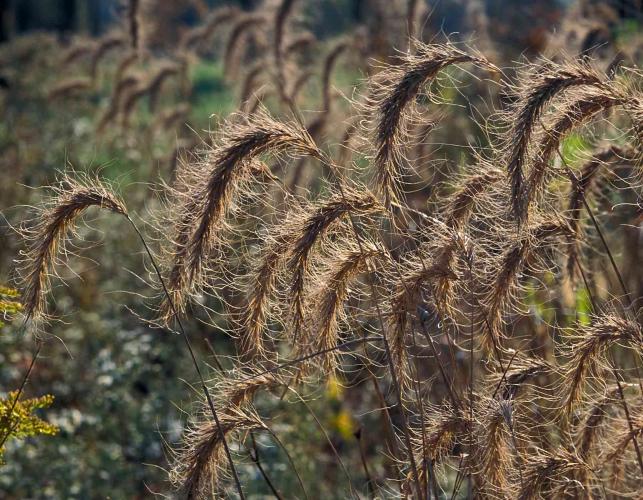 Caption
Canada wild rye can be identified by its bristly seed heads, which curve downward. As the seeds mature late in the growing season, the long awns of the seed heads curl and bend.
Credit
Jim Rathert
Right to Use
1/5
Image 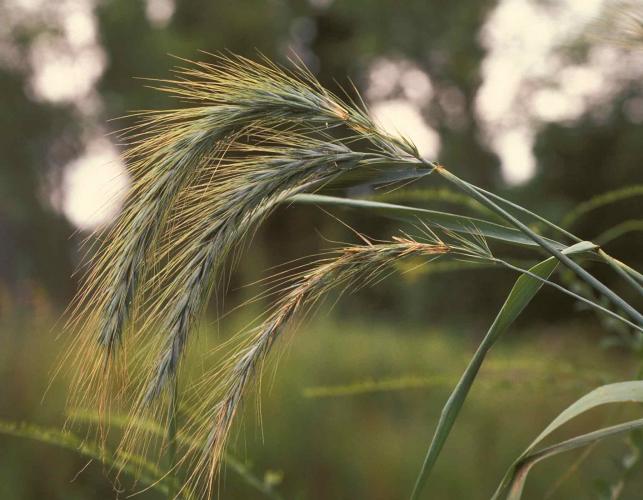 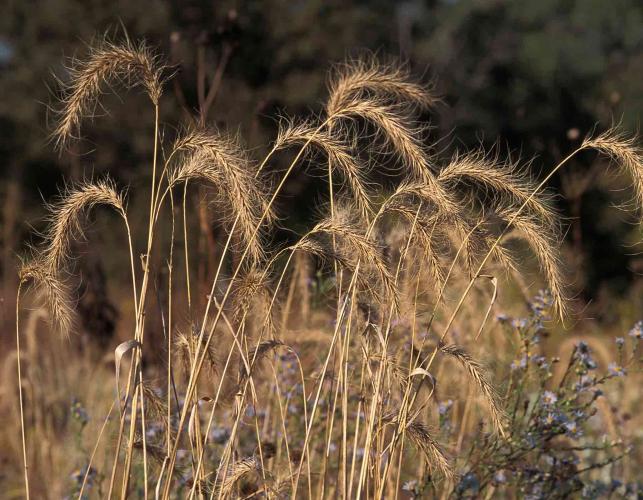 Caption
When it’s young, Canada wild rye is considered highly desirable as forage or hay for livestock. By late summer, the spiny mature seed heads, however, may injure the mouths of grazing animals.
Credit
Jim Rathert
Right to Use
3/5
Image 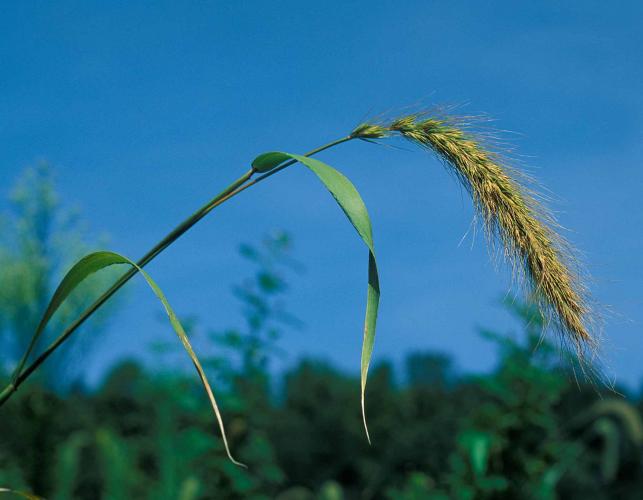 Caption
The nodding flowering heads of Canada wild rye are bristly and generally resemble those of wheat or rye. At first, the bristly awns on the flowering heads are straight, but as they mature and dry, they will curl and bend.
Credit
Jim Rathert
Right to Use
4/5
Image 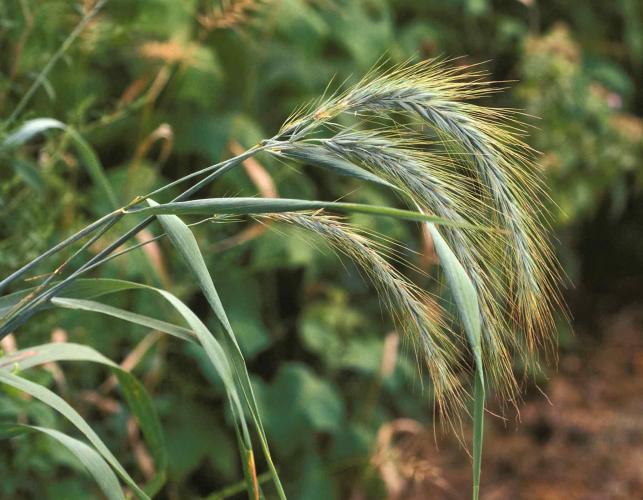 Caption
The stems and leaves of Canada wild rye may be green or, as in this case, bluish green; they are hairless, sometimes with a whitish, waxy coating, which you can see here.
Credit
Jim Rathert
Right to Use
5/5
Image 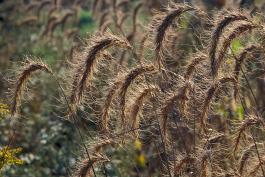 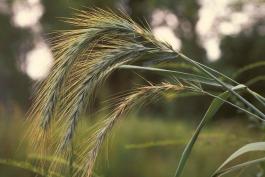 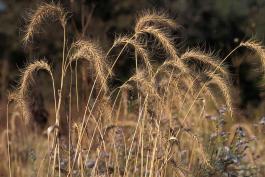 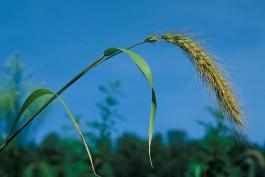 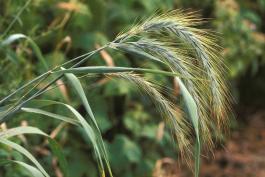 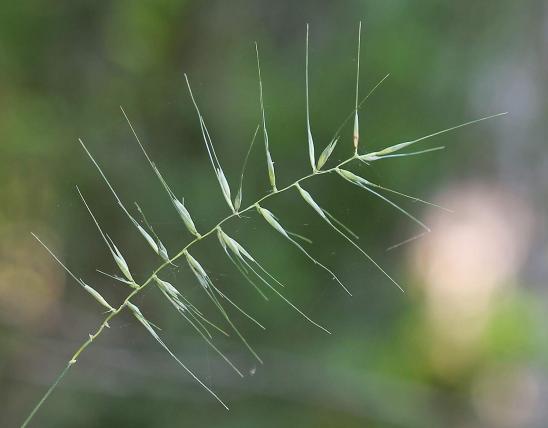 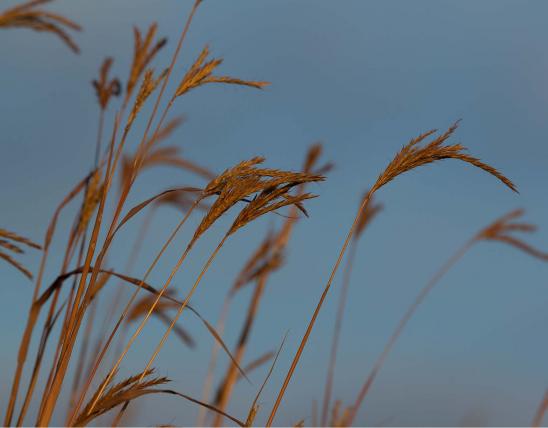