Bracken is a perennial fern that grows from thick, dark, long-creeping rhizomes. Single leaves arise at intervals from the rhizomes (leaves are not in clusters). Leaf stems are erect and straw-colored to light brown. Leaf blades are broadly triangular in outline, are pinnately divided 2–3 times, and usually angle back so that they are nearly parallel with the ground. Slender hairs may or may not be present on leaves. The leaves fall away in winter. Spores are produced in a nearly unbroken line along the edges of the leaflets, where they are covered by the folded-under leaflet margins. Spores are produced July–September.

Similar species: Two subspecies of bracken occur in Missouri. They mostly share the same distribution and habitat preferences, and there are plenty of intermediate specimens. The terminal (end-tip) lobes of the leaflets (pinnules) are the difference:

Common Name Synonyms
Bracken Fern; Brake; Brackenfern; Eagle Fern
Size
Leaf length: 14 to 60 inches. The leaf blades usually bend back to be nearly horizontal with the ground, and colonies of the plants are a little over knee-high.
Where To Find
Scattered in the southern half of the state, mostly in the Ozarks, but it occurs locally north to Sullivan County. This fern occurs nearly worldwide.

In Missouri, bracken occurs in openings of rocky, upland forests and road banks, mostly in acid soils. This species is notable for living in relatively dry, barren, sunny, disturbed places with poor soils — very different from the moist, rich, shady locations preferred by other ferns. After a frost, the leaf blades wither away, and the brittle, erect leaf stalks may remain. This fern is widely distributed globally and occurs in many habitats and elevations. In fact, it is one of the most broadly distributed species of vascular plants in the world. In many parts of its range it is considered a noxious weed that colonizes disturbed soils.

Ferns have a two-part life cycle. The part with the larger emphasis is the sporophyte, the fern plant we usually see, which produces spores. Each tiny spore is capable of germinating into a little leaflike plant called a gametophyte. In separate organs, the gametophytes produce eggs and sperm. When a sperm and egg unite, a new sporophyte (“fern plant”) develops, usually out of the center of the gametophyte.

On many ferns, the spores are covered by a flap of tissue called an indusium. Indusia can take many shapes and can occur on different parts of the fern frond, and these differences can be important for identifying ferns. Bracken, for example, has no true indusia — instead, the developing spores are covered by the folded-under leaflet margins. These are called “false indusia” and help to identify the species.

The fiddleheads of this widely distributed fern have been eaten as a vegetable in many parts of the world. You may have had it, for example, in the Korean dish bibimbap, or enjoyed a small bowl of marinated fiddleheads as one of the banchan side dishes that usually accompany a Korean meal.

The leaves of bracken contain substances that are poisonous to livestock and humans when eaten. Although young fiddleheads are still eaten in many parts of the world, they have been shown to contain a number of nerve poisons as well as carcinogenic compounds. They have been implicated in higher rates of stomach and intestinal tumors in regions where they are a common part of the diet. Certain cooking practices may reduce the toxicity of these plants.

The leaves of bracken have been used for packing material, thatching, and (burned) for making potash (which was used for making soap, glass, and bleach). The rhizomes yield a yellow dye that can be used for wool and leather.

Why is it “bracken” and not “bracken fern”? Because the word bracken itself means “fern.” It’s from the Middle English braken, related to the Scandinavian word bræke. For the same reason, we also have a group of ferns called “cliff brakes,” not “cliff brake ferns.”

Toxins in the leaves of bracken inhibit the growth of other plant species, and bracken has been shown to interfere with the regeneration of trees and shrubs after fires or logging in the western United States.

Bracken is one of the largest species of ferns. Underground, the deep-growing rhizimes may grow to about a quarter of a mile long!

One reason why bracken occurs almost worldwide is because its spores are tiny and hardy. They can be carried nearly anywhere on earth by the wind.

Certain types of moth caterpillars and other insect larvae eat bracken, and a few types of aphids have been documented drinking the sap. Mammals usually do not eat bracken because of its toxicity and bad taste.

In areas where bracken occurs in dense colonies, it provides valuable cover for a variety of birds, small mammals, and other animals.

Glands at the bases of the pinnae secrete nectar that attracts and is eaten by ants. It is possible that these ants attack insects that might arrive to feed on the leaf, and some evidence supports this idea of plant-insect mutualism.

Caption
Bracken is a deciduous fern, losing its leaves during the winter. In spring, new leaves arise, singly, from the creeping rhizome below ground.
Credit
Jim Rathert
1/1
Image 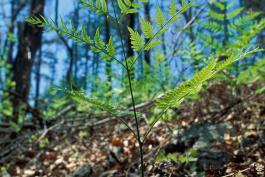 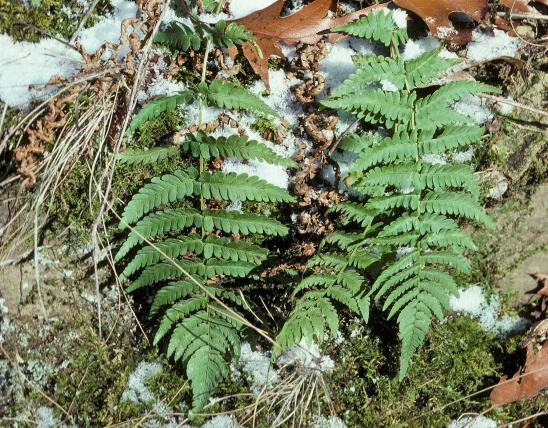 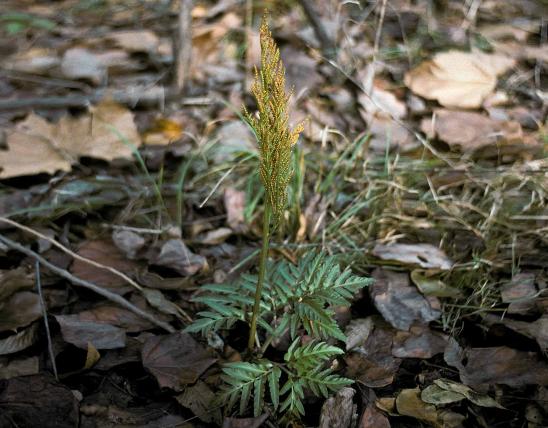 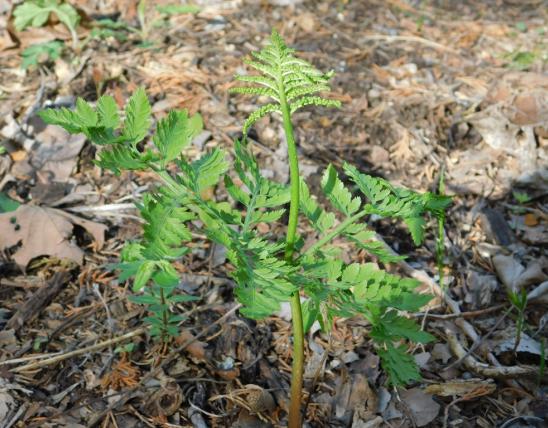 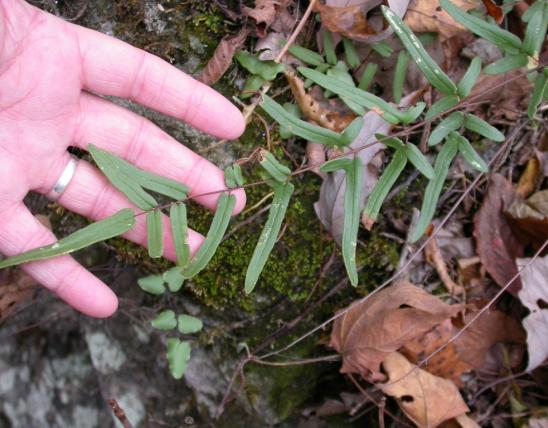 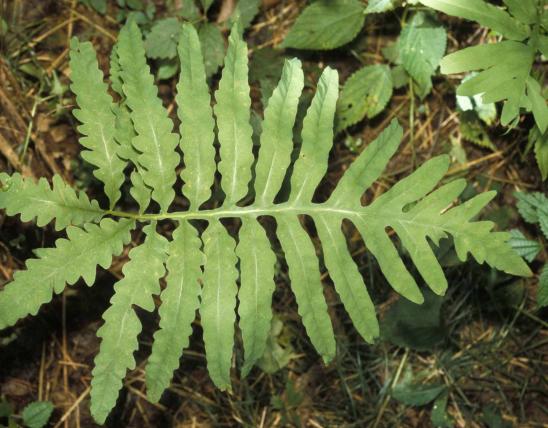 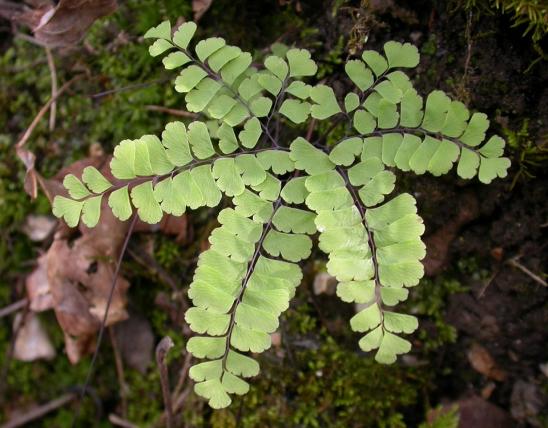 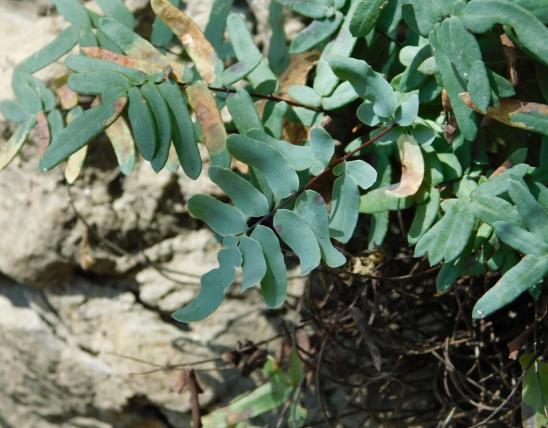 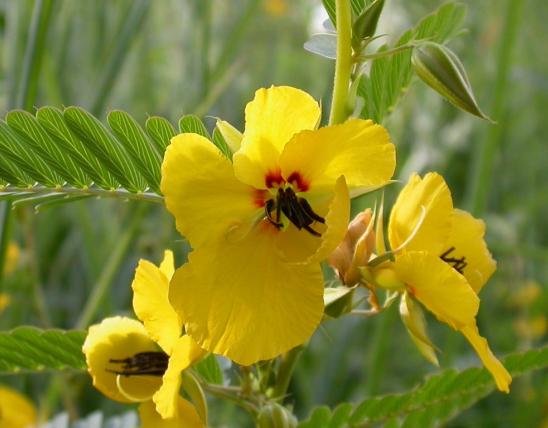 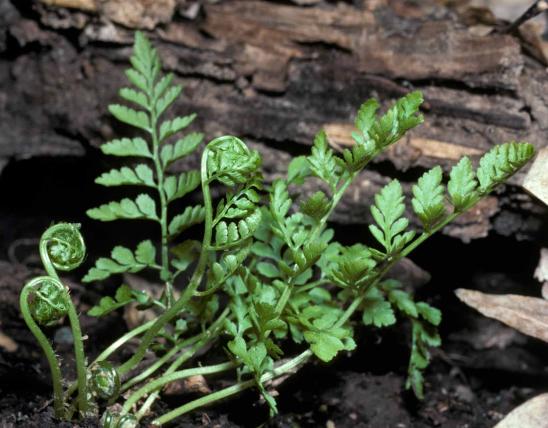 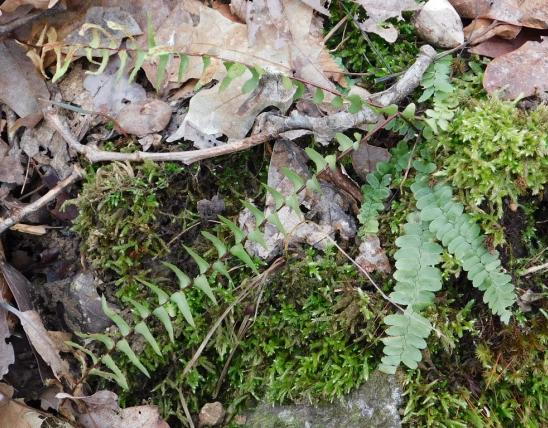 Ebony Spleenwort
About Wildflowers, Grasses and Other Nonwoody Plants in Missouri
A very simple way of thinking about the green world is to divide the vascular plants into two groups: woody and nonwoody (or herbaceous). But this is an artificial division; many plant families include some species that are woody and some that are not. The diversity of nonwoody vascular plants is staggering! Think of all the ferns, grasses, sedges, lilies, peas, sunflowers, nightshades, milkweeds, mustards, mints, and mallows — weeds and wildflowers — and many more!