Blue sage is easily identified by its wandlike clusters of sky-blue, two-lipped wildflowers. It blooms July–September in prairies, roadsides, and other open habitats.

Blue sage is a native, clump-forming perennial wildflower that grows from a thick, often rather woody rootstock. The stalks of this hairy plant, grayish are upright, wandlike, with few branches. The stems are square — a clue that it’s in the mint family.

The leaves are opposite, widely spaced on the stem, with short stalks, lance-shaped, to about 4 inches long and 1 inch wide, tapering at both ends, with a few teeth along the margins. Leaves have short, curved hairs. The veins on the undersides of the leaves are prominent.

Flowers are in whorled clusters along the top part of the stem; they are showy and sky blue. The calyx (sepal tube) is ridged and has 3 triangular lobes: 1 on top, 2 on the bottom. The calyx persists after the petals have fallen away. The corolla (petal tube) can be 1 inch long and has a wide-spreading lower lip and a hairy, narrow hood as the upper lip. The lower lip has 3 lobes: 2 short ones on the side plus a middle one that is notched at the center. The upper lip’s hood is formed by two corolla lobes that are so closely fused they appear united. Blooms July–September.

Similar species: Globally, there are about 900 species of Salvia. Many of these may be seen at garden centers and in landscape plantings. In Missouri, 4 salvias have been recorded growing out of cultivation:

Scattered mostly in northern Missouri and the western half of the Ozarks. As a native wildflower used as an ornamental landscape and garden plant, it may be cultivated statewide.

Because this species has been cultivated as an ornamental for so long, it is difficult for botanists to determine its native range versus places where it has been introduced and escaped into the wild.

This attractive native wildflower is grown as an ornamental in wildflower gardens and especially in naturalized settings. If you are interested having this plant in your garden, either collect seeds from wild plants or buy plants at reputable native plant nurseries. Never dig plants from wild settings.

The genus name, Salvia, is from the Latin salvus, meaning “healthy,” and it was applied to a type of European sage that was used medicinally.

Blue sage is one of the prime menu items on a prairie's "pollinator buffet." Bees, especially bumblebees, are the principal pollinators. Digger bees and longhorn bees, including the specialist blue sage longhorn bee, visit the flowers, too. Butterflies and skippers, and many other insects also like to visit blue sage. This is one of the plants used by the hermit sphinx as a caterpillar food plant. Mammals seem to avoid eating this plant. 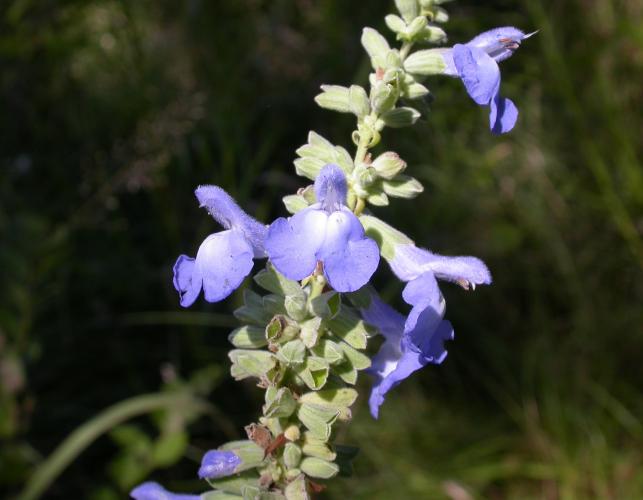 Caption
Blue sage is easily identified by its wandlike clusters of sky-blue, two-lipped wildflowers. It blooms July–September in prairies, roadsides, and other open habitats.
Credit
Julianna Schroeder
Right to Use
1/2
Image 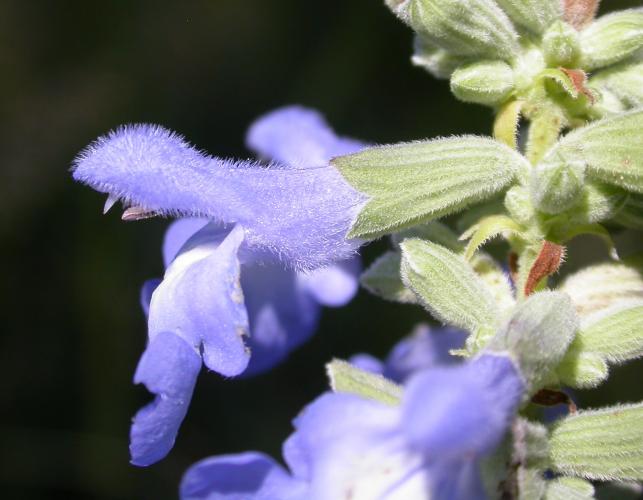 Caption
Blue sage flowers are sky blue and in whorled clusters. The sky-blue corollas are tubular with a narrow, hooded upper lip and a wide-spreading lower lip. The green calyx tube is ridged and has 3 triangular lobes; it persists after the petals have fallen away.
Credit
Julianna Schroeder
Right to Use
2/2
Image 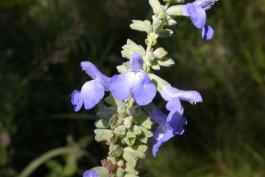 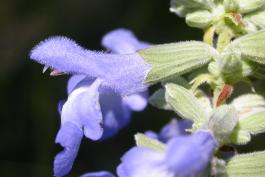 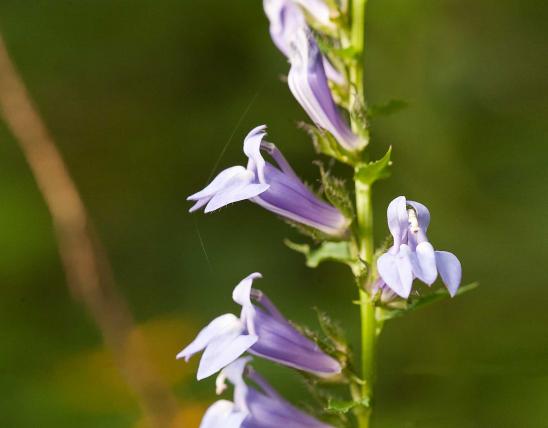 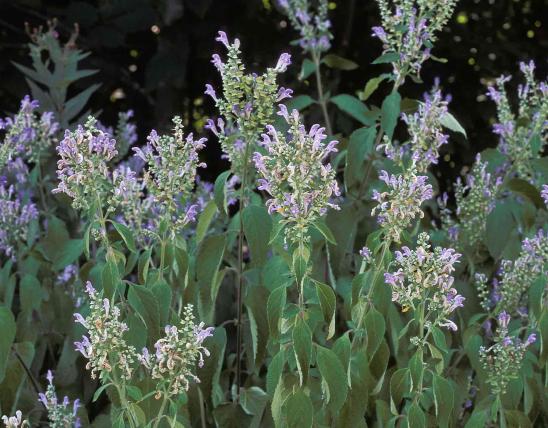 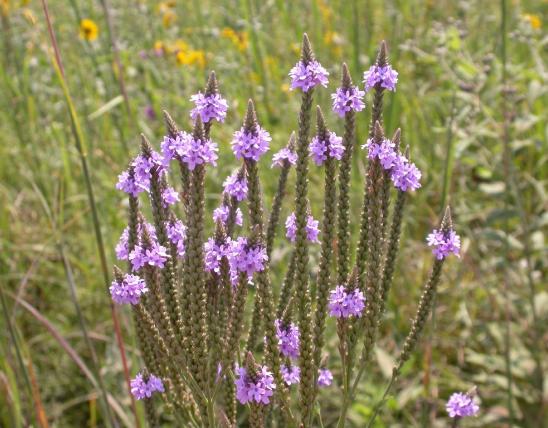 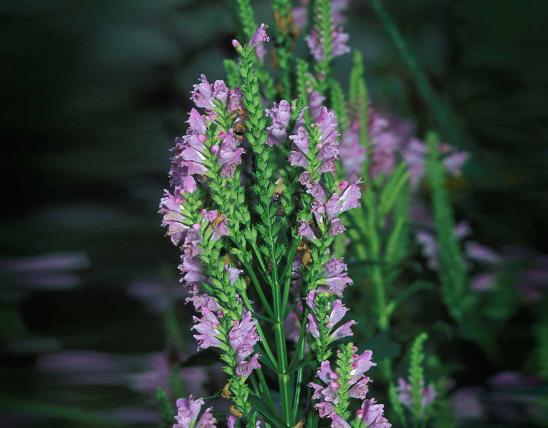 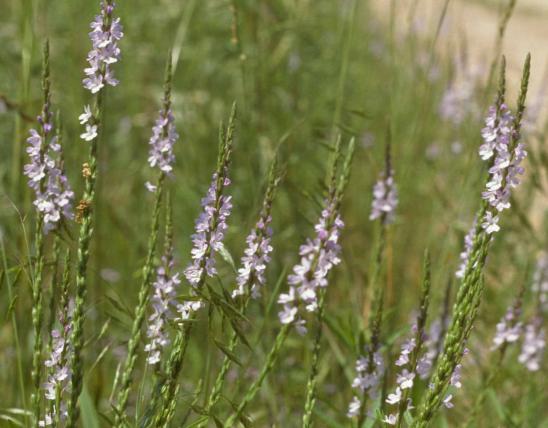 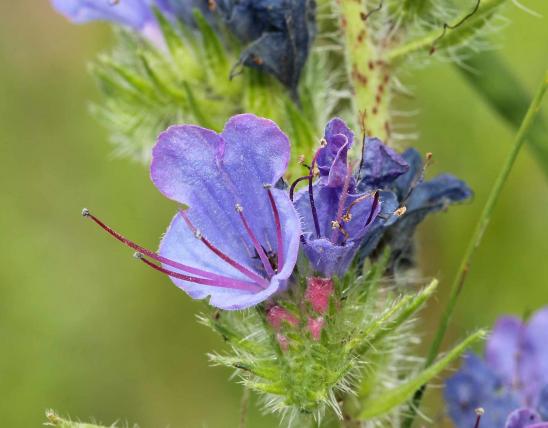 Viper's Bugloss
About Wildflowers, Grasses and Other Nonwoody Plants in Missouri
A very simple way of thinking about the green world is to divide the vascular plants into two groups: woody and nonwoody (or herbaceous). But this is an artificial division; many plant families include some species that are woody and some that are not. The diversity of nonwoody vascular plants is staggering! Think of all the ferns, grasses, sedges, lilies, peas, sunflowers, nightshades, milkweeds, mustards, mints, and mallows — weeds and wildflowers — and many more!