Bird grasshoppers (Schistocerca spp.) are a genus of short-horned grasshoppers. Most are large, long-bodied hoppers, with large wings, and many can fly gracefully — almost floating — away from danger and up into trees. Many species have attractive colors and markings, with olive-green bodies; darker, sometimes reddish forewings; a pale stripe running down the head and onto the back, and spotted wings or splashes of bright yellow on the body.

As with other grasshoppers and katydids, juvenile bird grasshoppers look something like smaller versions of the adults. Juveniles do not have fully developed wings, however, and in some species the coloration and markings can be quite different than the adult.

Learn more about the short-horned grasshopper family on their group page.

Adult length varies with species; females are usually larger than males. Bird grasshoppers are some of Missouri’s largest short-horned grasshoppers. Females of some of our typical species, such as the American and obscure bird grasshoppers, may reach 2½ or 2¾ inches. Our smallest species, the mischievous bird grasshopper, only reaches 1⅜ inches (males) and 1⅞ inches (females). Insect length measurements don’t include appendages such as antennae, legs, and wings.

Different species of bird grasshoppers may have slightly different habitat preferences, but most prefer open, grassy areas such as prairies, pastures, old fields, roadsides, gardens, and similar places. Open woodlands and the boundaries of grassy areas with wooded areas are other likely habitats.

Foliage of nonwoody and woody plants. Like most other short-horned grasshoppers, bird grasshoppers chew a wide variety of plants. They are generalists, not limited to certain species or families of plants.

Like other members of the short-horned grasshopper family (Acrididae), bird grasshoppers go through simple metamorphosis: after hatching from an egg, their juvenile stages look a lot like the adults. As they eat and grow, they molt their exoskeletons but do not go through a transformative metamorphosis or pupal stage. The final adult stage, however, usually has fully developed wings and is sexually mature. Egg-laden females poke the tips of their long abdomens into the soil to deposit clusters of eggs. True to the fable, grasshoppers usually only live for a season, then die with the hard freezes in late fall.

Grasshoppers can damage garden and crop plants, but they are rarely as bad as some other types of insect pests, such as squash bugs, armyworms, Japanese beetles, various weevils, and various aphids and scales. Certain species of bird grasshoppers have been known to have occasional outbreaks, usually in response to particular weather and environmental conditions. During outbreaks, they can be especially destructive.

Most members of the bird grasshopper genus are New World species, but there is a single member native to the Old World: the desert locust (S. gregaria). That species is infamous as the cause of the locust plagues mentioned in the Bible, the Mahabharata, Homer’s Illiad, and other ancient texts. A desert and dry-lands species, it normally lives in north and east Africa, Arabia, and southwest Asia. During certain years, environmental triggers cause its populations to change from a short-winged, solitary, nonmigratory form to a long-winged, gregarious, migratory form. The migratory version of the insect forms gigantic swarms and expands the range as far as Spain, Italy, northern India, and farther south in Africa. A swarm can include 390,000,000 locusts per square mile, travel rapidly over great distances, and devastate crops, causing serious food shortages for people.

On the subject of plagues of migratory locusts, two North American species are notable, but neither of them are bird grasshoppers:

In the bird grasshopper genus, there are about 10–13 species in North America north of Mexico, and about 50 species globally. All but one occur in the New World.

The biogeography of bird grasshoppers is puzzling, with dozens of species in the New World (North, Central, and South America) and only one in the Old. Also, except for the bird grasshopper genus, plus one close relative in the Galapagos Islands, the rest of the genera in that subfamily occur only in the Old World. Why is basically only one genus of this mostly Old World family present (and diverse) in the New World, yet represented by just one species in the Old?

Scientists have hypothesized several different explanations. For example, maybe the genus originated in the New World, and swarming behavior led some members of a North American bird grasshopper species to make it eastward across the Atlantic Ocean to Africa, thus starting the single Old World species. Or maybe the group arose when the continents were still linked together as Gondwanaland. Or maybe the ancestors of our bird grasshoppers migrated, from east Asia, across the Pacific to the New World, followed by another migration, across the Atlantic, from the New World to Africa, thus planting the single species of the genus in the Old World.

However, a 2006 paper presented strong evidence, including comparative DNA studies, that the Old World species was the founder of all the New World bird grasshoppers. It appears that a single migration — westward across the Atlantic, from Africa to Central America or northern South America — introduced the Old World hoppers to the Americas. After that, the bird grasshoppers diversified as they expanded their range and moved into new habitats, resulting in approximately 50 New World species.

Indeed, the African desert species has been documented flying, in large numbers, across the Atlantic and landing, alive, in the Caribbean Islands; it took them only a few days to do so in October 1988. The Old World species swarms in incredibly high numbers (easily to 100 million hoppers); they tend to fly during the day, when rising warm air currents can carry them as high as 6,500 feet (more than a mile high) into the air; and that high up, they can be transported by powerful wind currents.

For more on this fascinating story, read the published study itself: “Ancient trans-Atlantic flight explains locust biogeography,” by N. R. Lovejoy et al., published in the journal Proceedings of the Royal Society B (abbreviated as “Proc Biol Sci”), April 7, 2006. For nonscientists, the discussions of molecular methods and data may not be fun to read, but the introduction and discussion sections are quite interesting. 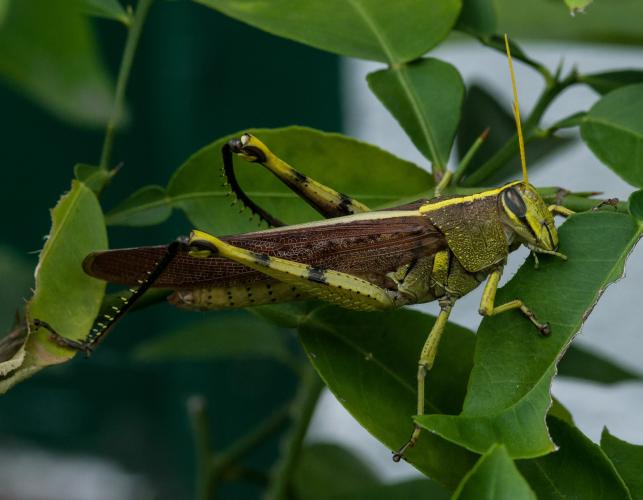 Caption
The obscure bird grasshopper is one of about six species of bird grasshoppers in Missouri. Most are attractively marked, large insects that gracefully fly from danger, almost like birds.
Credit
Susan Ferber
Right to Use
1/7
Image 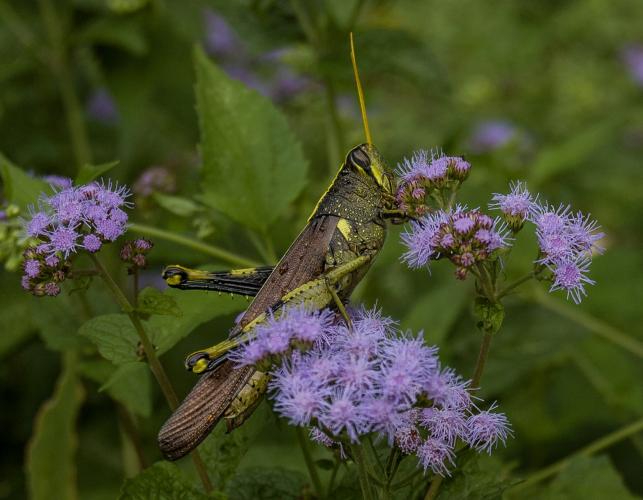 Caption
The obscure bird grasshopper belongs to a group of closely related, similar-looking bird grasshoppers. The bright yellow patch on the side of the thorax, olive-green body, and darker, often reddish-brown wings help identify it.
Credit
Susan Ferber
Right to Use
2/7
Image 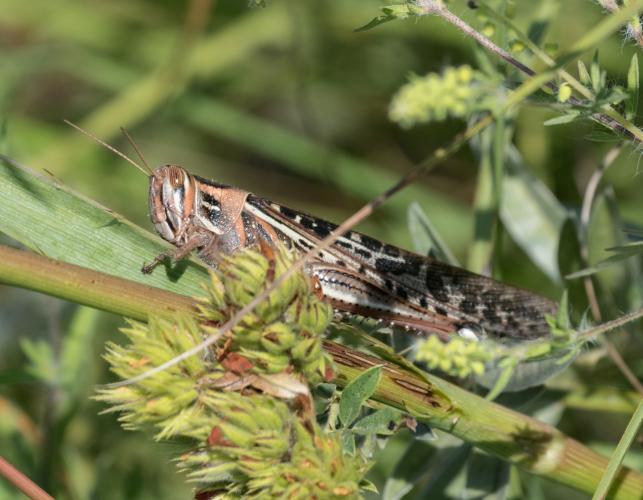 Caption
The American bird grasshopper is one of about six species of bird grasshoppers in Missouri. It has distinctive, ornate markings.
Credit
Susan Ferber
Right to Use
3/7
Image 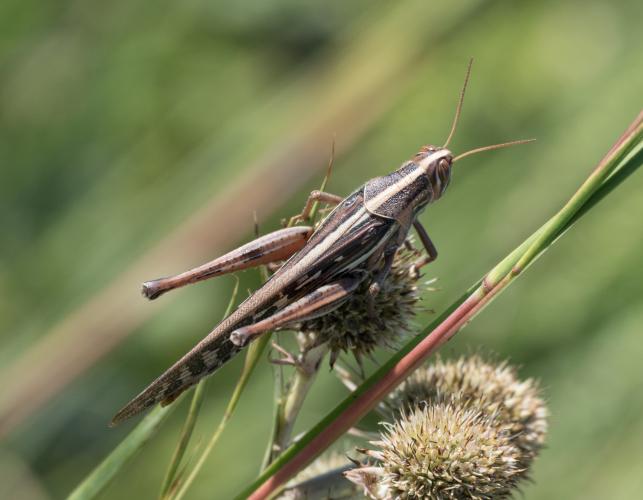 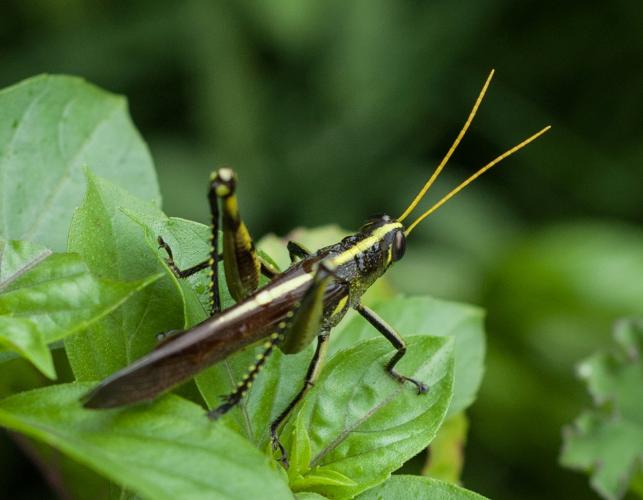 Caption
The obscure bird grasshopper has a bold, usually bright yellow stripe running down its back.
Credit
Susan Ferber
Right to Use
5/7
Image 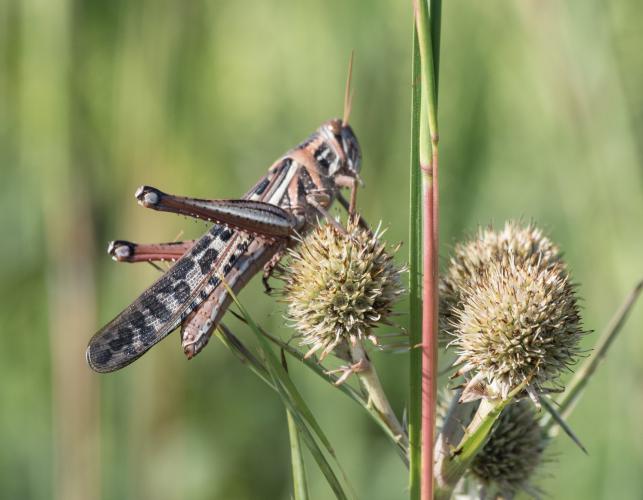 Caption
The American bird grasshopper is identified, in part, by its large size, spotted wings, and other distinctive markings.
Credit
Susan Ferber
Right to Use
6/7
Image 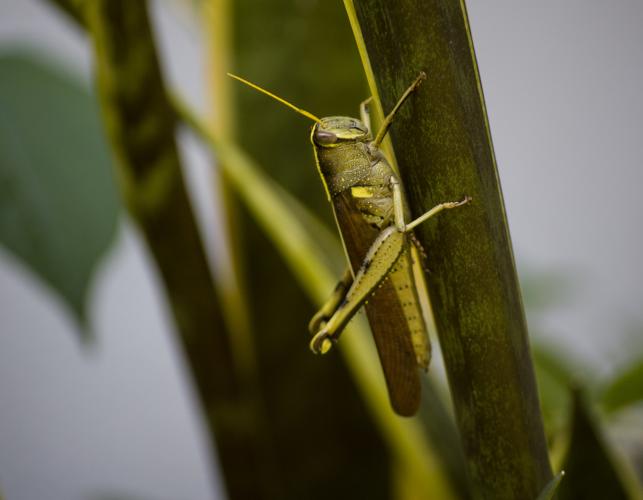 Caption
The obscure bird grasshopper and other grasshoppers are generalist herbivores that chew a wide variety of plants. Their colors help them blend in among the plants they eat, concealing them from their many predators.
Credit
Susan Ferber
Right to Use
7/7
Image 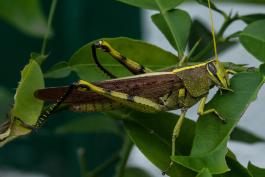 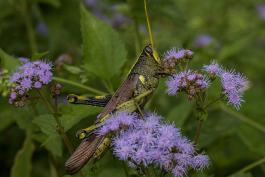 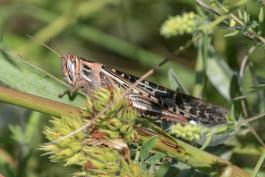 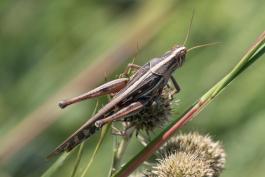 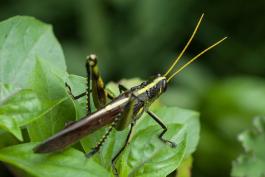 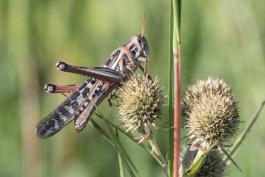 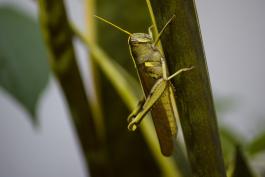 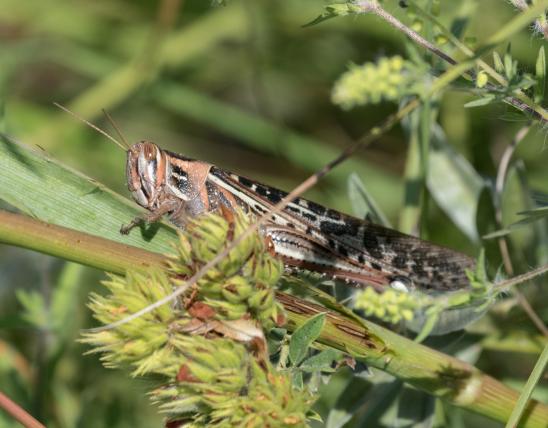 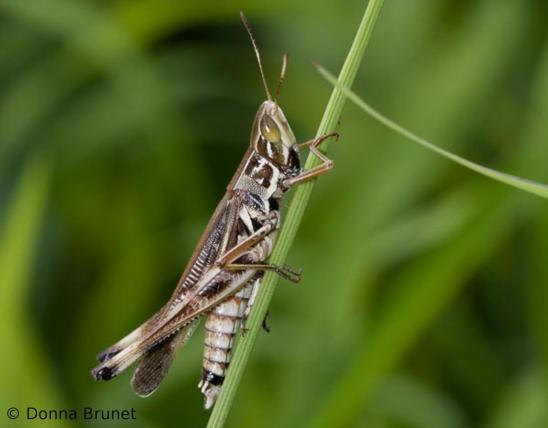 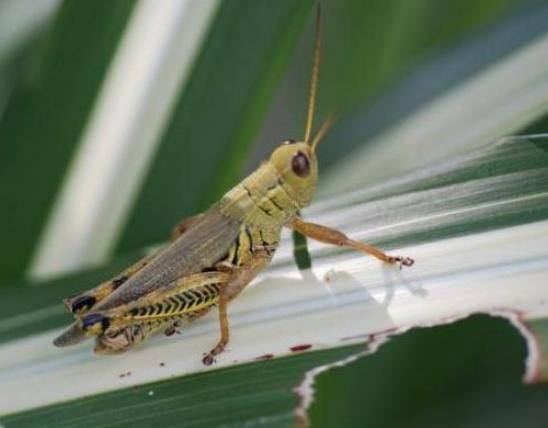 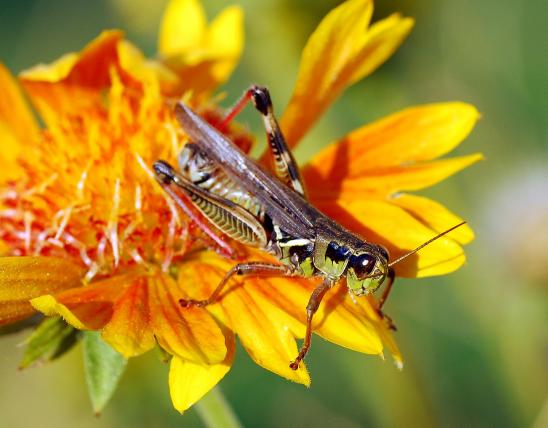 Red-Legged Grasshopper
About Land Invertebrates in Missouri
Invertebrates are animals without backbones, including earthworms, slugs, snails, and arthropods. Arthropods—invertebrates with “jointed legs” — are a group of invertebrates that includes crayfish, shrimp, millipedes, centipedes, mites, spiders, and insects. There may be as many as 10 million species of insects alive on earth today, and they probably constitute more than 90 percent all animal species.