Andrenid bees, also called mining bees, are solitary ground-nesters. Most are specialist pollinators whose life cycle is timed to correspond precisely to the blooming of specific flowers.

Andrenids are fairly small bees, usually dark-colored, and often banded. The degree of fuzziness or hairiness varies among species. They might easily be mistaken as small honeybees or wasps.

Specialists identify this family of bees by the dense bristles (scopae) at the bases of the legs and the shin-like sections (tibias) of the legs, as well as by certain creases and grooves on the face and head and by unique wing vein patterns.

For example, the many members of genus Andrena have a band of pale hairs running down each side of their face: the hairs emerge from a groove (a fovea) located between each compound eye and the middle of the face.

Statewide. Different species may have different distributions, mostly tied to the overall range in North America and the specific habitat and flower species they require.

Most andrenids are closely tied to specific types of plants that they can pollinate. Their emergence is tied precisely to the blooming of these specific flowers. Because of this, andrenids are some of the first bees to emerge in spring, and many are active in March and April, as they visit early spring wildflowers. There may even still be snow on the ground.

To see a particular andrenid species, find out what flowers it specializes in, learn the flower's bloom time and habitat, and seek the bees that way.

Another way to see andrenids is to look for places where they are nesting, usually sandy or dry dirt areas with little vegetation, including barren places in old fields or grasslands, dirt roads, and even hiking trails. Several andrenids often nest nearby each other. While a female is working on a nest, she typically makes a little pile of dirt near the entrance. Sometimes the hole entrance is concealed by a leaf or some other shelter.

In North America, andrenid bees are especially diverse in the desert southwest and Great Plains, where they find a diversity of special flowers and the dry, sandy soils members of this family generally prefer.

Andrenids are not aggressive. The various species are important pollinators for a wide variety of plants.

At least one species of andrenid bee is on the list of Missouri species of conservation concern: Andrena beameri, which has no common name. It is ranked as vulnerable to extirpation or extinction from our state. It specializes in visiting and pollinating early-blooming species of Coreopsis, such as C. lanceolata, C. palmata, and C. grandiflora. These flowers only bloom a few weeks out of the year, usually in prairies. Original prairie remnants are critical to the survival of this species.

Andrenid females dig burrows into the ground, often in sandy areas with little vegetation. They often nest in aggregations (collections of individuals nesting in the same location). Each female's tunnel typically branches, with a brood cell at the end of each branch. Some species secrete a goo that is used to plaster the walls of each cell, helping to waterproof it. The mother provisions each brood cell with a ball of pollen and nectar, and she deposits a single egg on each pollen ball. Then she seals the cell and works on the next one.

There is a great deal of mystery surrounding the timing of emergence for andrenid bees. With only one brood a year, and most species having only certain types of flowers they can pollinate, their emergence time is critical: too early, or too late, and they miss the blooming of their special plants. Without their pollen balls, there can be no food for the next generation of young. Considering the brood cells may be 1 or 2 feet underground, how do they know when to emerge?

The plight of wild bees should concern us all. Fortunately, homeowners can easily help bee populations in their yards. Plant flowers that will bloom throughout the season, especially early and late in the season, when fewer pollen and nectar sources are available. Avoid pesticides and any plants or seed treated with neonicotinoids, which are harmful to all insects, including bees (some neonicotinoid names to watch for on plant or seed labels are imidacloprid and acetamiprid). Reduce mowing to allow broadleaf plants in your lawn to flower. Consider putting up a bee house.

About 30 percent of U.S. crops rely on native bees for pollination, so it's important to know that we need many more pollinators than just honeybees. Andrenids and other native bees are often specialists that evolved alongside specific types of plants and are the only insects capable of pollinating them.

Andrenid bees pollinate wildflowers, fruits and vegetables, and a variety of other crops.

Andrenid bees, being solitary, do not have a colony of close relatives to defend the way social bees and wasps do, so they do not aggressively defend their nests.

People are finally becoming attuned to the importance of our wide variety of native bees. Native pollinators play a critical role in the health and integrity of our natural habitats. Amid Missouri's array of woodlands, grasslands, and wetlands is a wide variety of wildflowers and other flowering plants. Most of these are pollinated by various types of bees. Without pollination, they cannot produce seeds; they would not reproduce. The seeds, fruits, and the plants themselves are the food of countless animals. In a very real way, pollination is critical to life as we know it.

Who depends on whom? To reproduce sexually, and in many cases to create fertile seeds, many plants require an insect to carry the pollen from one flower to another. In many flowers, special anatomy can thwart pollinators that visit lots of different flowers, whose indiscriminate wanderings might uselessly distribute pollen to unrelated plants. But the same unusual flower structures that lock out those pollinators help to reward, with their own exclusive source of pollen and nectar, the few specialized insects that evolved with the plant to be its special couriers.

From the bees' perspective, its special type of flower is its source of life. Being programmed with innate behavior and anatomy, and even the timing of emergence, to visit only certain types of flowers, the adult bee relies on the flower for its nutrition, and for the food it provides its young.

Some andrenid bees have notably large compound eyes and/or ocelli (simple eyes, usually positioned between the compound eyes or on the forehead). The big-eyed species are often crepuscular (most active at dawn or dusk). Indeed, some of these are the special pollinators of evening primroses, flowers that typically bloom at twilight. This explains the large eyes, since most other bees are most active during the middle of the day when there's plenty of light. 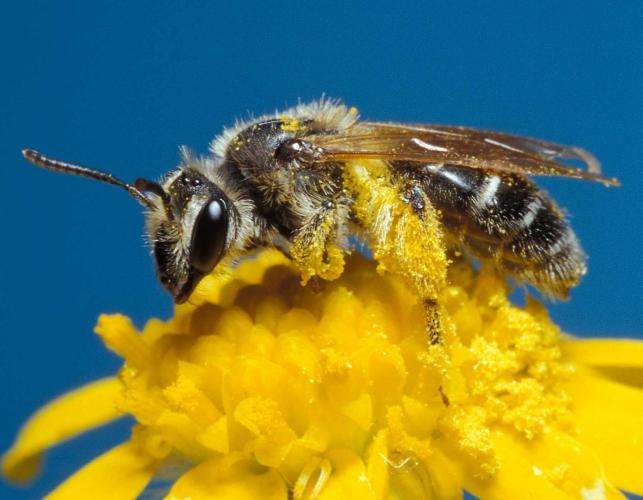 Caption
Andrenid bees, also called mining bees, are solitary ground-nesters. Most are specialist pollinators whose life cycle is timed to correspond precisely to the blooming of specific flowers.
Credit
Jim Rathert
Right to Use
1/4
Image 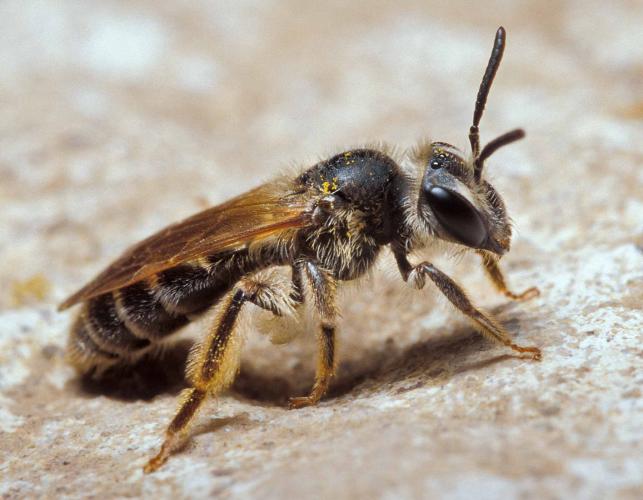 Caption
The many miner bees in genus Andrena have a band of pale hairs running down each side of their face: the hairs emerge from a groove (fovea) located between along the inner sides of each compound eye.
Credit
Jim Rathert
Right to Use
2/4
Image 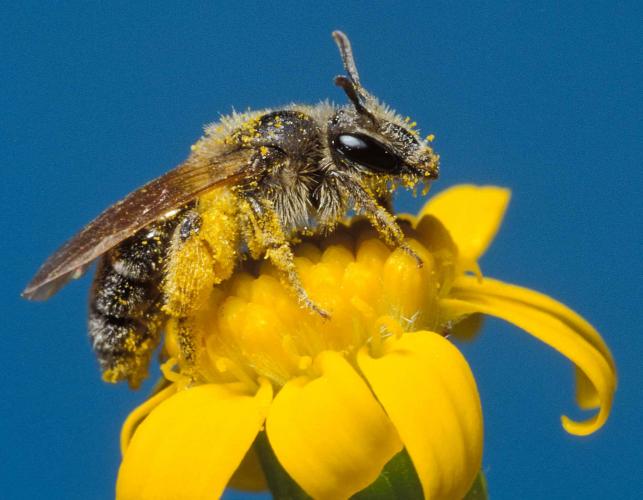 Caption
To see a particular andrenid species, find out what flowers it specializes in, learn the flower's bloom time and habitat, and seek the bees that way. This is one of the miner bees in genus Andrena.
Credit
Jim Rathert
Right to Use
3/4
Image 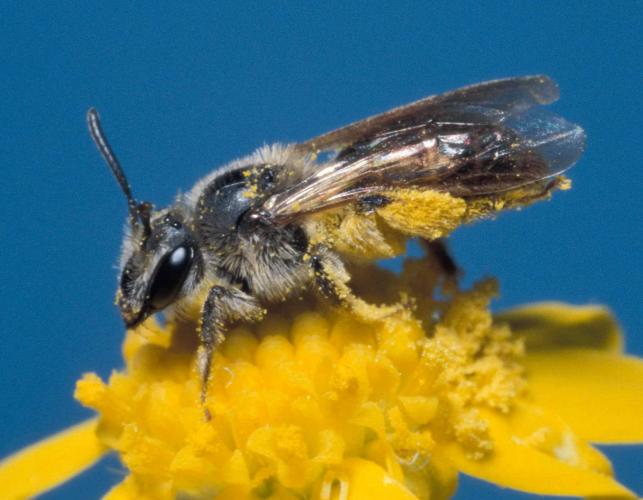 Caption
Specialists identify the andrenid family of bees by the dense bristles (scopae) at the bases of the legs and the shin-like sections (tibias) of the legs, by certain creases and grooves on the face and head, and by unique wing vein patterns. Note that andrenids collect pollen on leg hairs and not in little pollen baskets on the legs.
Credit
Jim Rathert
Right to Use
4/4
Image 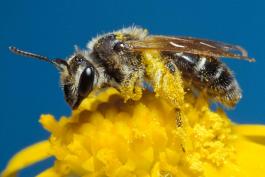 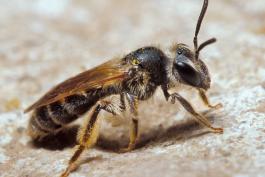 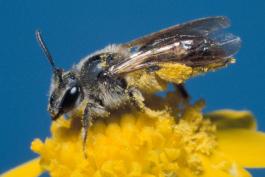 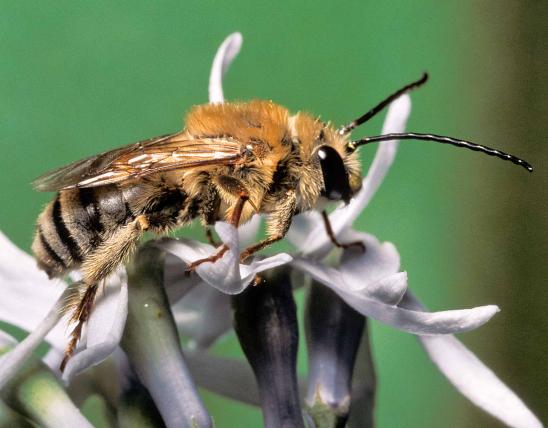 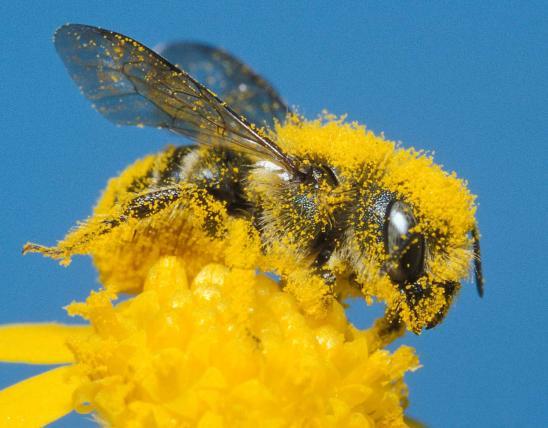 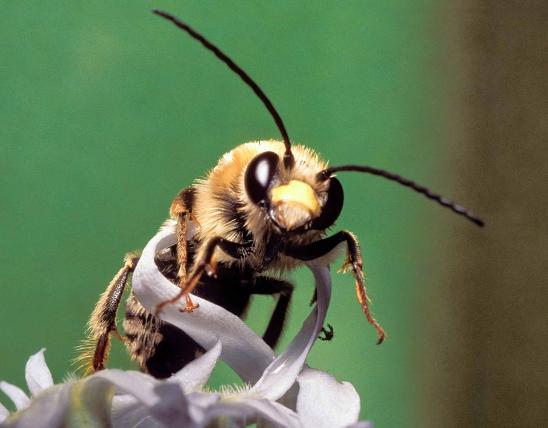 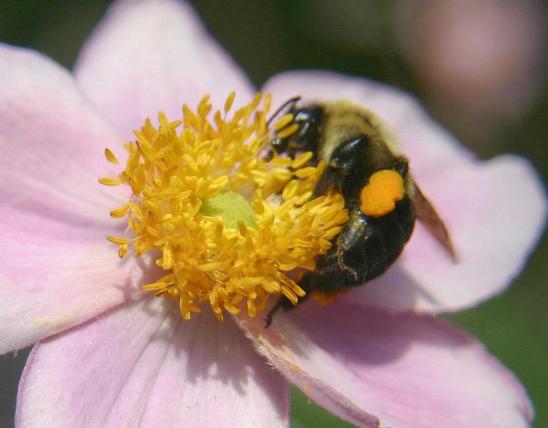 Robber Flies
About Land Invertebrates in Missouri
Invertebrates are animals without backbones, including earthworms, slugs, snails, and arthropods. Arthropods—invertebrates with “jointed legs” — are a group of invertebrates that includes crayfish, shrimp, millipedes, centipedes, mites, spiders, and insects. There may be as many as 10 million species of insects alive on earth today, and they probably constitute more than 90 percent all animal species.