The ailanthus webworm moth is long and thin and curves its wings lengthwise along the body. Forewings are orange with white spots outlined in black (these often look like tiny flower patterns). The mouthparts (labial palps) are curved upward. Some of the head scales stick up to form a tuft. The antennae are filamentous and are held out in front of the head instead of pointing back toward the wingtips.

The slender larvae are brownish with lengthwise stripes and sparse, straight, medium-length hairs. They live communally in webs in ailanthus trees.

Similar species: Several other types of small moths rest with their wings curled lengthwise around the body, but this is Missouri’s only species with this color pattern. Also, the caterpillars of some other species live gregariously in silken webs or tents. But note the food plant (usually ailanthus) and the presence of various life stages living together in the case of ailanthus webworm moth.

Although most moths are nocturnal, this moth commonly flies during the daytime, and people often see it gathering nectar from flowers in open locations. But the adults also often swarm at lights at night.

The homeland of this moth extends from southern Florida south to about Costa Rica; this region is where native paradise trees grow, and those are its larval host plants. But when people introduced Asian tree-of-heaven (Ailanthus altissima) to North America — and those trees spread invasively — this moth soon had a suitable host plant occurring far north of where it had been able to live before.

Ailanthus webworm moths cannot survive cold winters, so when it freezes, northern populations are wiped out. But each spring, the moths start expanding their range northward again, starting from warm southern regions. They arrive in Missouri in early April and are present until they are zapped by freezing weather again in November.

Adult moths drink nectar from a variety of flowers, usually in open habitats, usually during the day.

Abundant resident species that recolonizes the state each summer.

Formerly considered the same as A. punctella and A. pustulella, but those names now apply only to a separate species that only occurs in tropical rainforests.

Tropical ermine moth caterpillars are gregarious (live communally). Called webworms, they live in loose webs that enclose the leaves of host shrubs and trees, which allows the caterpillars to feed without leaving the safety of the web. In the case of the ailanthus webworm moth, a single web community may contain all four life stages: eggs, caterpillars, pupae, and adults, and a web community may continue throughout summer. An individual moth can progress from egg to egg-laying adult within four weeks. The moths have a very long life span.

A “mnenomic device” is a mental technique for remembering something. If you associate the colorful wing pattern of this moth with bright Hawaiian shirts, then you can remember that it is a species that originally occurred in southern Florida and other parts of tropical America. During summers, its range expands northward because people introduced a suitable host plant from Asia.

Ailanthus trees were introduced to our continent as hardy ornamental “street trees” that could survive in polluted urban environments. They have proven to be invasive, reproducing uncontrollably and difficult to kill, plus they smell bad and release chemicals that suppress the growth of nearby plants.

Considering this moth’s primary North American food plant is an invasive, nonnative species, it’s hard to call it a pest. In regions where other host plants grow, such as avocado, this species may be a pest on them.

Many insects have black and bright red, orange, or yellow coloration, and this color combination often corresponds with an ability to sting, or toxicity if eaten. So the bright orange-and-black color of adult ailanthus webworm moths apparently serves to warn potential predators that this moth may be distasteful or toxic if eaten.

Is this a native moth, or not? The answer is yes and no: it is native to our continent, but it’s harder to call it a native to Missouri, since it probably wouldn’t occur here if not for the introduced tree-of-heaven. But when a species expands its range to nearby areas on its own, that is usually considered a natural occurrence. 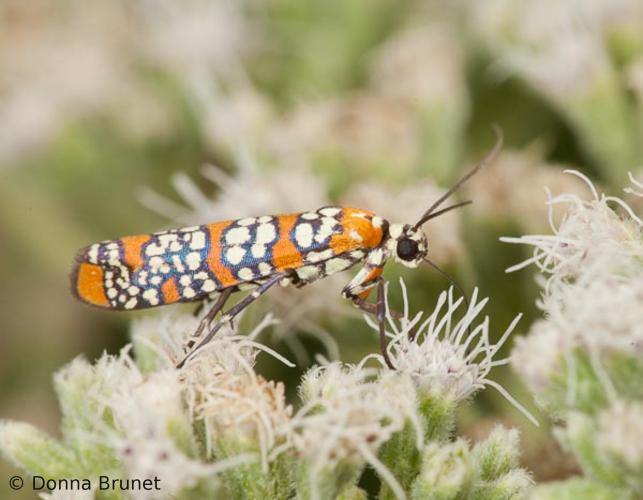 Caption
Ailanthus webworm moths visit flowers in the daytime but also come to lights at night.
Credit
Donna Brunet
Right to Use
1/3
Image 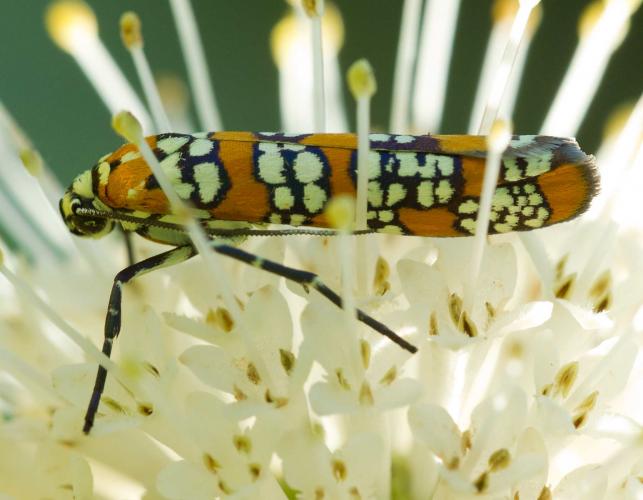 Caption
Adult ailanthus webworm moths drink nectar from a variety of flowers, usually during the day. This one is visiting a buttonbush flowerhead.
Credit
Noppadol Paothong
Right to Use
2/3
Image 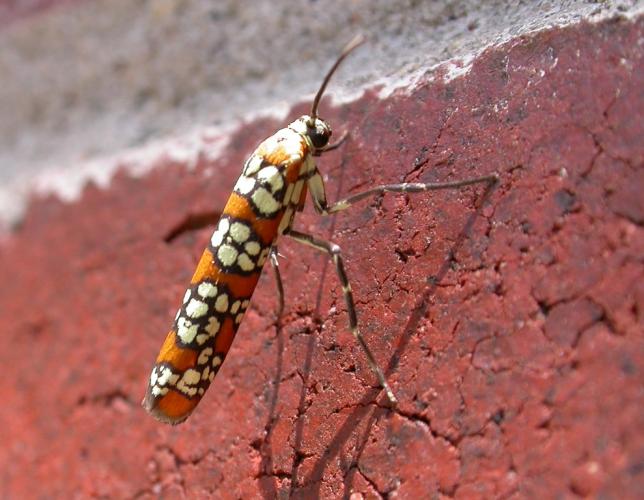 Caption
In their tropical homelands to the south, ailanthus webworm caterpillars eat the leaves of native paradise trees. But elsewhere in North America, they eat the introduced, invasive ailanthus tree.
Credit
Julianna Schroeder
Right to Use
3/3
Image 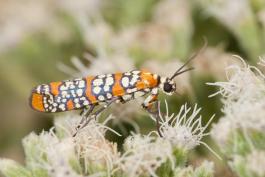 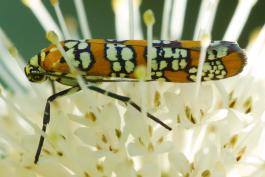 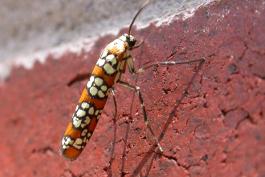 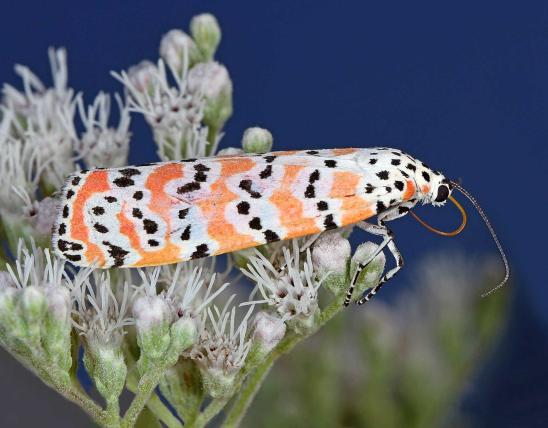 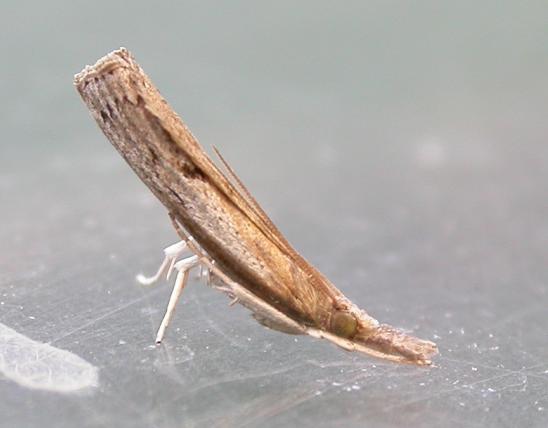 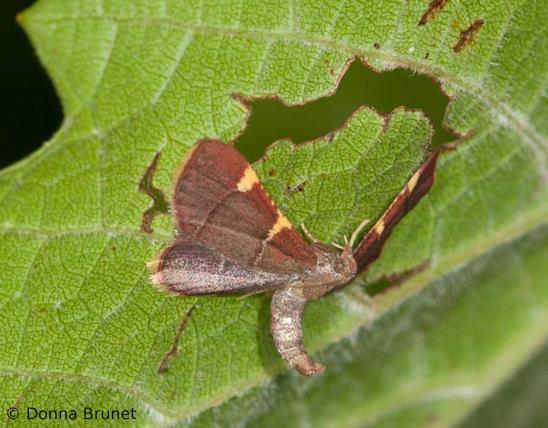 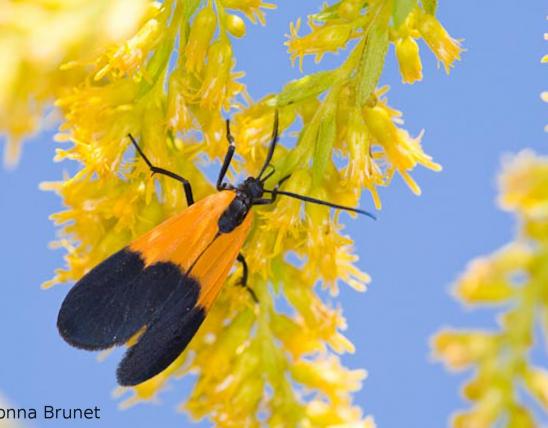 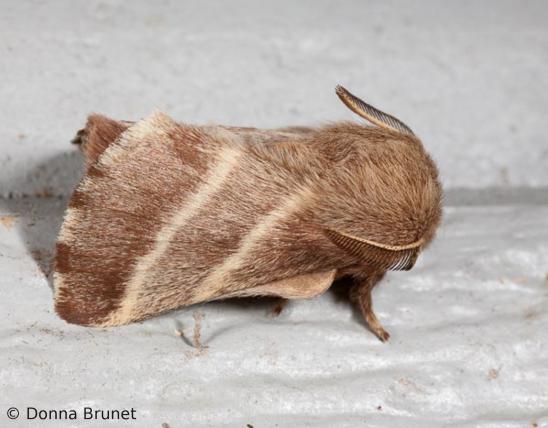 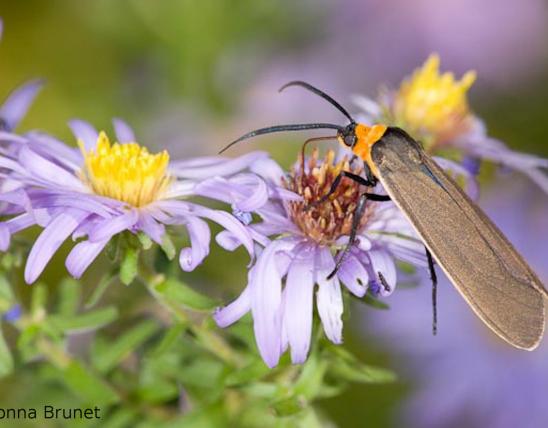 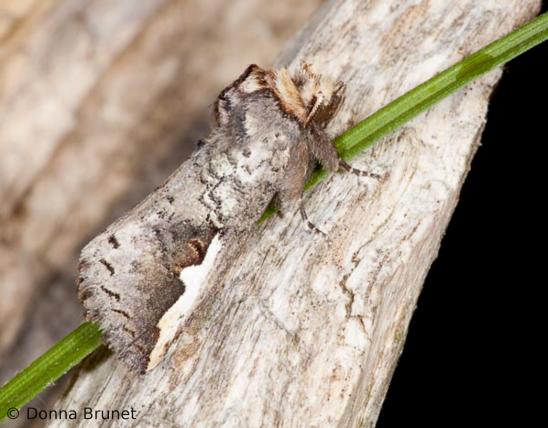 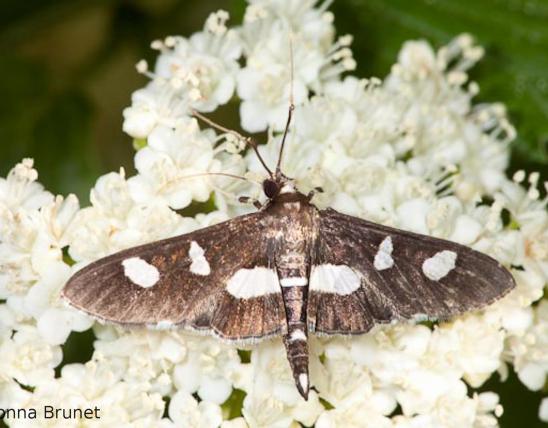 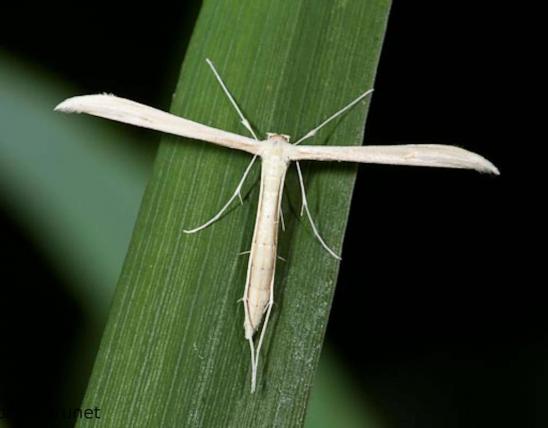 Plume Moths
About Butterflies and Moths in Missouri
Butterflies, skippers, and moths belong to an insect order called the Lepidoptera — the "scale-winged" insects. These living jewels have tiny, overlapping scales that cover their wings like shingles. The scales, whether muted or colorful, seem dusty if they rub off on your fingers. Many butterflies and moths are associated with particular types of food plants, which their caterpillars must eat in order to survive.