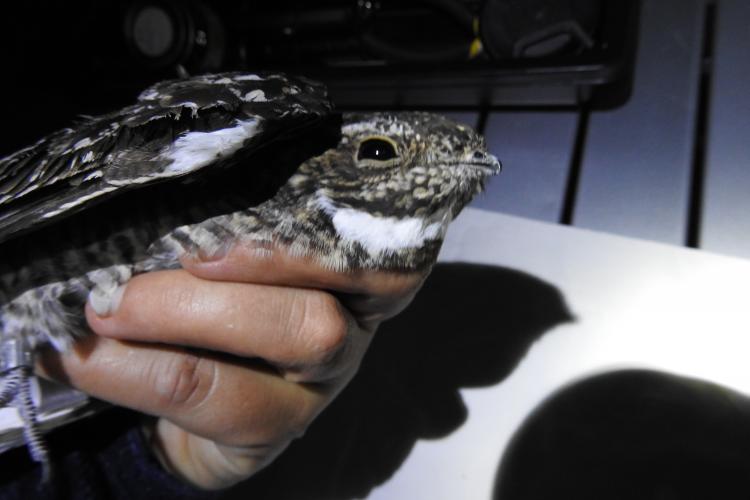 Caption
MDC has joined the Motus Tracking Wildlife System to track the movements of migratory bird species as they pass through or breed in Missouri, such as this Common Nighthawk that was tagged in Montana at MPG Ranch Aug. 27 and detected in southwest Missouri Sept. 24 and 25.
Credit
Photo courtesy of Kate Stone, MPG Ranch
Right to Use
1/2
Image 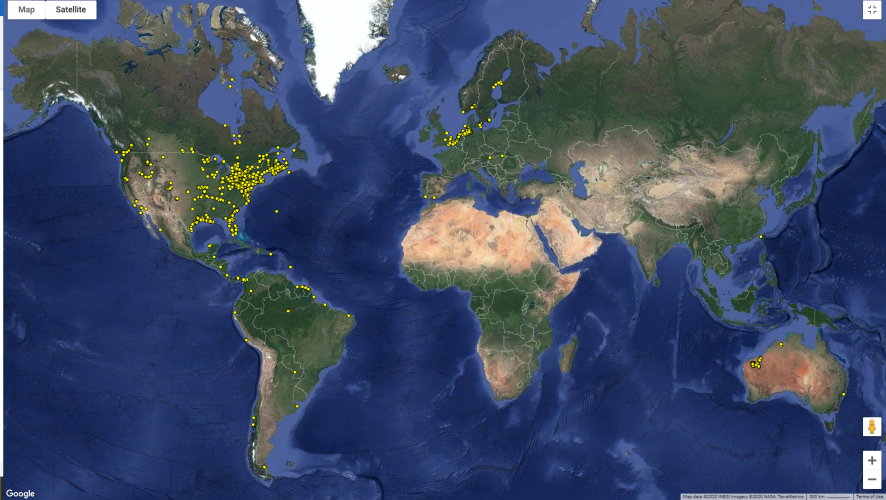 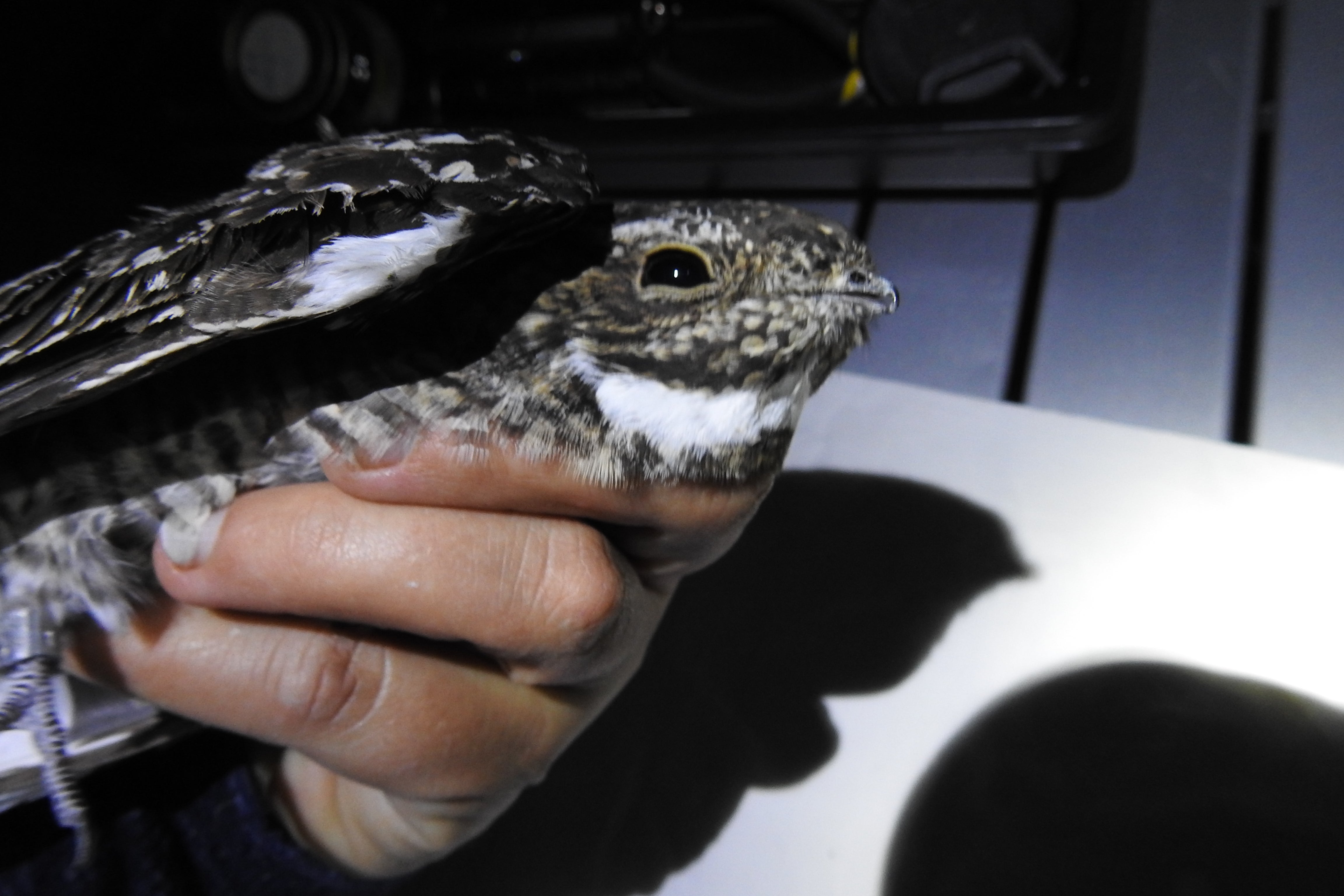 Is user submitted
Caption
MDC has joined the Motus Tracking Wildlife System to track the movements of migratory bird species as they pass through or breed in Missouri, such as this Common Nighthawk that was tagged in Montana at MPG Ranch Aug. 27 and detected in southwest Missouri Sept. 24 and 25.
Credit
Photo courtesy of Kate Stone, MPG Ranch
Right to Use
Image 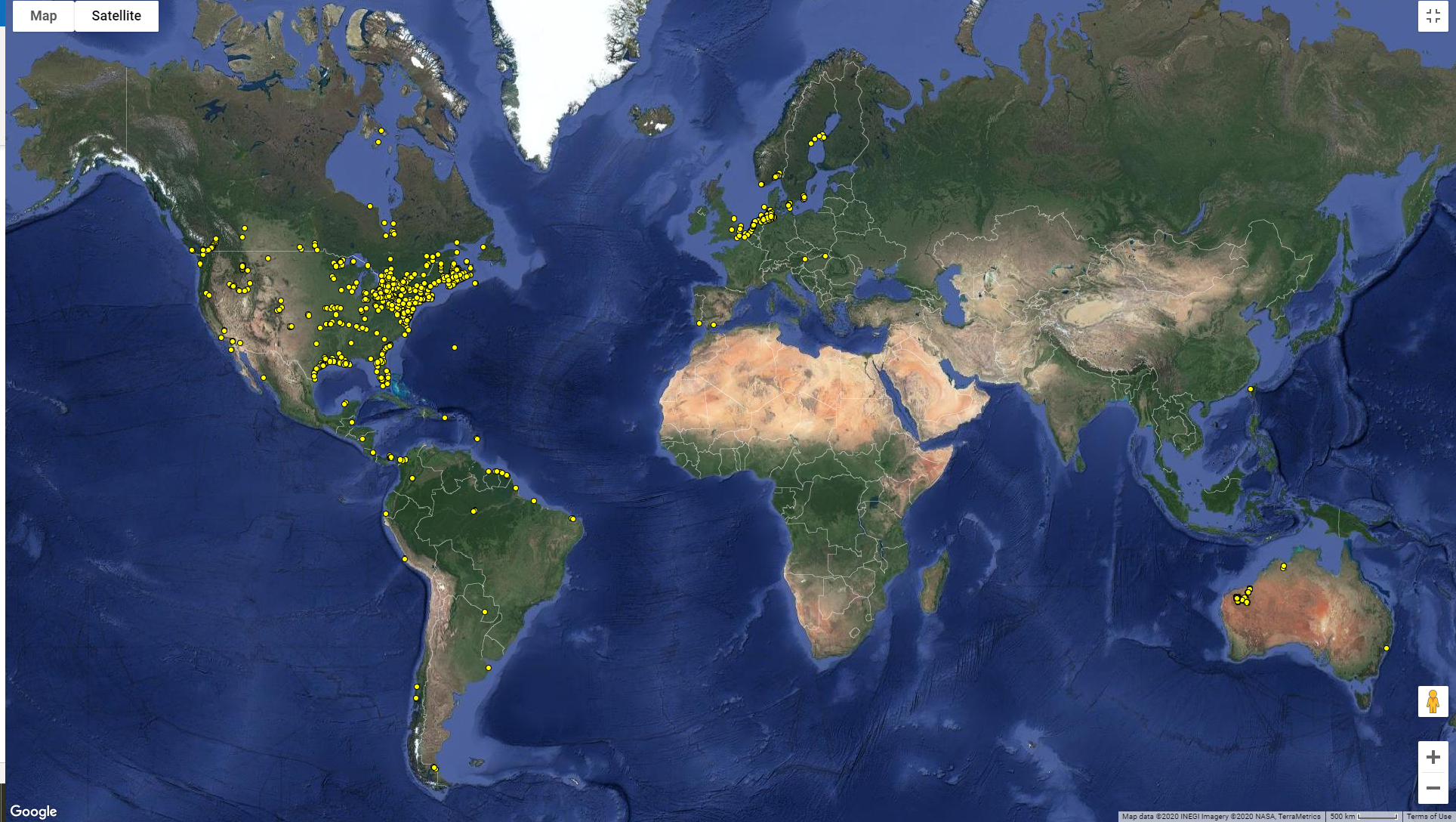 JEFFERSON CITY, Mo. – Last year, the Missouri Department of Conservation (MDC) joined the Motus Wildlife Tracking System – an international network of receiver stations tracking the large-scale movements of birds, bats, and large insects. Through the Motus program, researchers across the western hemisphere can improve their understanding of migrant species that pass through or breed in Missouri. During 2020 fall migration, Motus receivers in Missouri detected 19 Motus-tagged birds, most of which were originally tagged by researchers in Montana.

Motus began in 2014 by Bird Studies Canada with other Canadian partners but has since spread rapidly to 31 countries across four continents. The tracking system works on a two-part basis: using nanotags and a collaborative system of receiver stations. Researchers fit birds with lightweight nanotags, or tiny radio transmitters, that send out radio signals coded to be detected on the Motus frequency. There are currently 996 active Motus stations in the world, all listening on the same frequency. When these Motus-tagged animals fly within range of any Motus receiver along its migration route, the signal is detected and stored, or uploaded to the Motus website via an internet connection or the cellular network.

“Motus is revolutionary because of its collaborative nature,” explained MDC State Ornithologist Sarah Kendrick. “We can learn so much more about long-distance migration together than separately. Using Motus, researchers are learning more and more about migration timing, routes, duration, and stop-over sites – all of which help us target conservation efforts for these species along those pathways.”

To date, researchers have tagged nearly 25,000 individuals and more than 230 species with nearly 900 partners and collaborators. To learn more about the program, visit motus.org.

Despite the Midwest containing the Mississippi Flyway – a major bird migration route along the Mississippi, Missouri, and Lower Ohio Rivers – there are many gaps in the Motus network in the region.

“Motus is expanding in the Midwest, but compared to the Northeast, we’re still a ‘black hole’ for Motus coverage,” noted Kendrick. “Missouri has quality and diverse habitat for birds at a major crossroads of the Missouri and Mississippi Rivers, which makes our state and region an important thoroughfare for Motus tracking.”

With the help of generous donations and partnerships with the Missouri Conservation Heritage Foundation, Burroughs Audubon Society, Greater Ozarks Audubon Society, Missouri Birding Society, St. Louis Audubon Society, Columbia Audubon Society, the U.S. Fish and Wildlife Service, the St. Louis Zoo, and others, Missouri has installed 16 active Motus receivers. These receivers make up two latitudinal “digital fences” in the northern and southern portions of the state that contain diverse habitat and breeding grounds for many bird and bat species.

Since the installation of the Motus receivers in the last year, Missouri had three detections of Motus-tagged birds during spring migration and 18 detections during fall migration. Species detected include Swainson’s Thrushes, Gray Catbird, and Common Nighthawk tagged in Montana and British Columbia, and a Mourning Warbler tagged in Colombia.

“These detections show how Motus is only as strong as the investment made in it,” said Kendrick. “Filling gaps in coverage almost always leads to new and inspiring findings.”

Last year, MDC and partners were awarded a U.S. Fish and Wildlife Service grant to place 12 new Motus stations in Missouri, Illinois, and Guatemala. Additionally, a multi-state U.S. Fish and Wildlife Service grant was submitted in June with MDC as the lead entity to purchase and place a further 59 new Motus receivers (48 to be placed in Minnesota, Wisconsin, Michigan, Iowa, Missouri, Illinois, Indiana, and Ohio and 11 in Mexico, Costa Rica, and Colombia) on stop-over sites and wintering grounds of many migratory species.

“The ornithological community knows relatively little about the migratory pathways of our smalls birds and their survival on that journey and over the winter,” Kendrick said. “One-third of the birds that breed in Missouri leave the U.S. in the non-breeding season for up to eight months of the year! We cannot ignore the threats that these species face beyond our borders – especially when many populations are declining precipitously. Tracking will help bird conservation partners further pinpoint conservation efforts where they’re needed most.”

To learn more about Missouri’s role in the Motus Wildlife Tracking System, visit the MDC website at https://short.mdc.mo.gov/Zbn and in this Missouri Conservationist magazine article.