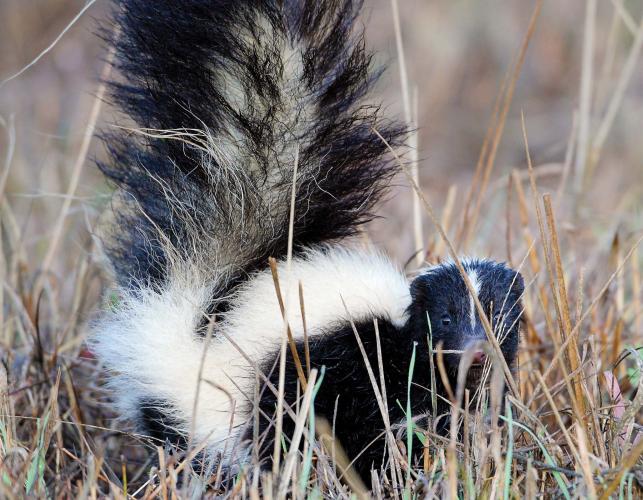 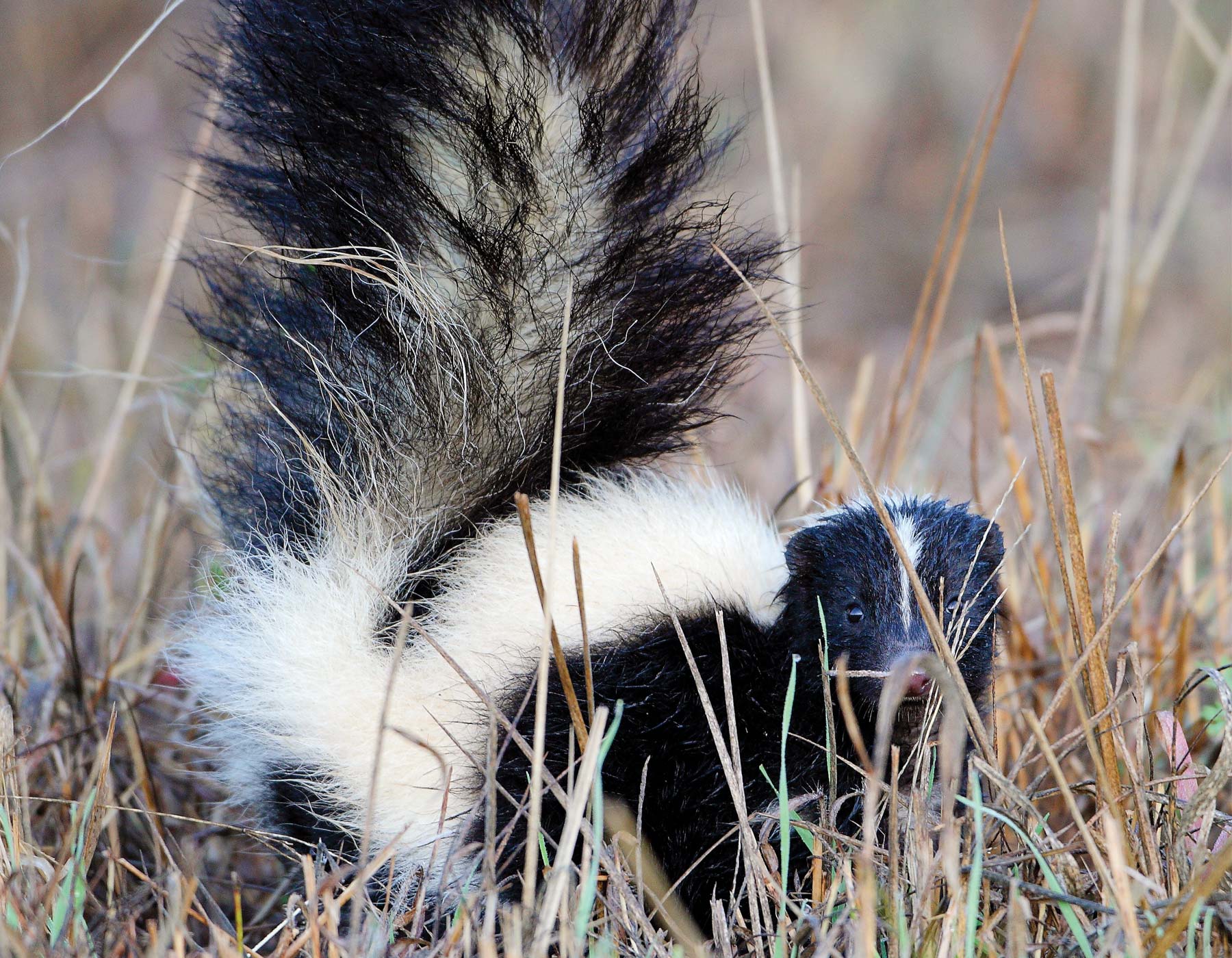 JEFFERSON CITY–Skunks soon will emerge from their winter naps, and state officials urge Missourians to exercise caution in encounters with these formidable little creatures.

Missouri’s only common skunk is the striped species, Mephitis mephitis. Skunks spend the winter holed up in sheltered spots, such as rock piles, barns, and out buildings. Occasionally one finds its way under a front porch.

Mating season begins in late February and continues through March. Males can cover 5 miles in a night of searching for food and mates, so it isn’t surprising that human encounters with skunks increase at this time of year.

Striped skunks aren’t big, measuring only about 12 inches not counting their fluffy tails. A 10-pounder is a jumbo skunk. They normally are not aggressive, and leave when they encounter people. However, skunks can lose their natural fear of humans if they learn to associate people with easy meals, as sometimes happens around campgrounds. In such situations, they may become alarmingly fearless.

What skunks lack in heft, they make up in aroma. One well-placed spray from a skunk’s musk glands can leave a human or a would-be predator gagging and gasping for breath. But as obnoxious as skunks’ scent can be, it is not the most dangerous thing about them.

Rabies can occur at any time of year. Skunks are one of two primary carriers of the rabies virus in Missouri. The Missouri Department of Health and Senior Services (DHSS) found 12 rabid skunks and 16 rabid bats in 2012. The confirmed rabies cases came from 14 counties scattered from extreme northwestern Missouri to the Ozarks. All the rabid animals were tested because of abnormal behavior.

In skunks, rabies symptoms include abnormal behavior, such as being active in the daytime, aggressiveness, seizures, stumbling, and vocalizing. However, skunks and other infected animals can transmit rabies before they show symptoms of the disease.

The rabies virus is transmitted through infected animals’ saliva. Exposure normally occurs as a result of a bite. Less commonly, the virus can enter the body through an open wound or mucous membranes. It takes three to six weeks from the time of exposure for symptoms to appear, but the incubation period can be much longer.

There is no treatment for rabies once symptoms appear. Treatment must begin within days of exposure if the biting animal is known to be rabid or cannot be tested. In the past, rabies treatment consisted of multiple, painful injections in the abdomen, but this has been replaced by simple injections into the arm muscle.

Fortunately, human cases of rabies are rare. The last recorded case in Missouri occurred in 2008. The victim did not seek medical advice or treatment after being bitten by a bat. The last case of human rabies in Missouri before that was in 1959.

Several things should be done immediately if a person is bitten by a wild animal or a domestic animal that has not been vaccinated against rabies. First, wash the wound with soap and water and continue flushing the wound with water for five minutes. Then get medical attention immediately.

The biting animal should be trapped or killed if this can be accomplished safely. If possible, contact a law-enforcement agency so they can dispatch a conservation agent or animal-control officer to do the job.

The undamaged brain is needed for rabies testing, so if the animal is shot, it should be shot in the body, not the head. A skunk will spray when shot, so stay upwind and shoot from a distance if possible.

Use rubber gloves when handling dead animals and avoid any contact with the body. Place the carcass in a garbage bag and then double bag it. Live animals should be confined in a manner that prevents contact with other animals or people. Call a conservation agent, law-enforcement agency, or state or local health department for help with testing.

A rabies vaccination provides excellent protection for dogs, cats, and ferrets. It may protect other species, such as pet rabbits, but it is not licensed for these other animals, so there is no guarantee of protection.

If a vaccinated pet is bitten by a suspect skunk or other animal, the biting animal should be tested for rabies. In the meantime, the bitten pet must be revaccinated and kept out of contact with people or other animals. If the biting animal tests negative for rabies, the pet is safe. If rabies is confirmed, the vaccinated and revaccinated pet must be confined for 45 days to be sure rabies does not develop.

An unvaccinated pet that is bitten by a rabid animal is almost certain to die. Unvaccinated dogs, cats, and ferrets exposed to a rabid animal should be euthanized immediately. If the owner refuses to euthanize, vaccination and a six-month quarantine are required by law. However, there is evidence that the administration of vaccine after exposure to the virus will not prevent the disease.  Missouri State Wildlife Veterinarian Kelly Straka, with the Missouri Department of Conservation, says euthanizing is the wisest and kindest course of action.

“The law does not require you to euthanize a pet in a case like that,” says Straka, “but keeping an unvaccinated pet that has been exposed to rabies is a huge liability and risk to children and other pets. You have to keep the animal in strict quarantine from any contact with people or other animals for six months. In the meantime, you and all the people and animals in your neighborhood are at risk, and the pet is almost certainly going to suffer terribly.  Keeping your pet’s vaccinations current is the best tool we have to prevent rabies.”

More information about rabies prevention is available at batcon.org/index.php/bats-a-people/bats-and-rabies.html.