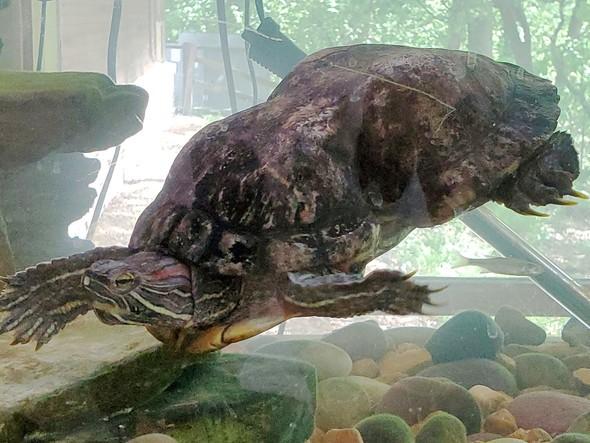 Caption
Peanut the Turtle swims in her aquarium after returning from a surgery performed by the Saint Louis Zoo to remove trapped follicles on her ovaries. The famous red-eared slider and animal ambassador for litter awareness is recovering and doing well.
Right to Use
1/2
Image 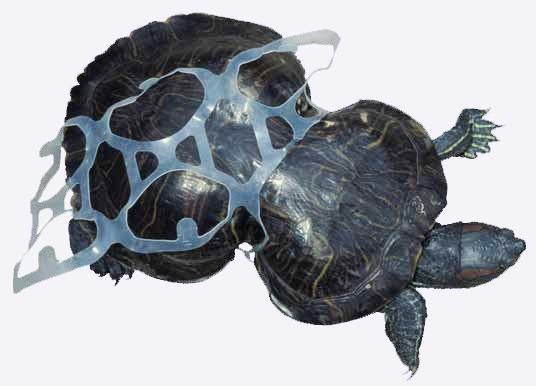 Caption
A publicity file photo of Peanut with a plastic six pack holder.
Right to Use
2/2
Image 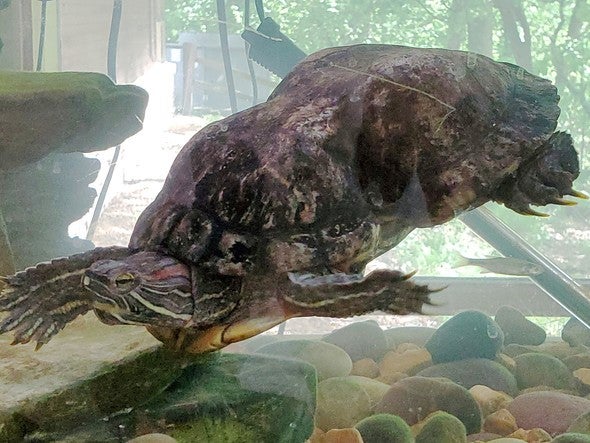 Is user submitted
Caption
Peanut the Turtle swims in her aquarium after returning from a surgery performed by the Saint Louis Zoo to remove trapped follicles on her ovaries. The famous red-eared slider and animal ambassador for litter awareness is recovering and doing well.
Right to Use
Image 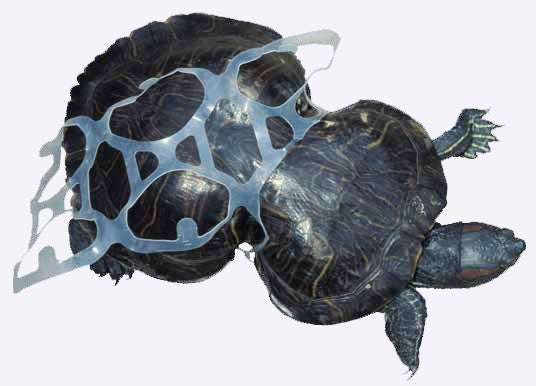 Is user submitted
Caption
A publicity file photo of Peanut with a plastic six pack holder.
Right to Use
News from the region
Saint Louis
By
Dan Zarlenga
Published Date
05/14/2020
Body

St. LOUIS, Mo.—The Missouri Department of Conservation (MDC) says Peanut the Turtle is back at Powder Valley Nature Center in Kirkwood after undergoing a recent surgery at the Saint Louis Zoo. The procedure was performed by the Zoo’s assistant director of animal health, Dr. Chris Hanley, and veterinary resident, Dr. Kari Musgrave. Due to a condition known as follicular stasis, Peanut had to have both of her ovaries surgically removed. Peanut is in the process of recovering and doing well.

Peanut the Turtle has attracted attention all over Missouri, along with national and worldwide fame, as an anti-littering mascot. At a young age, the red-eared slider wandered into a plastic six-pack ring and it stuck around her shell. As her shell grew, it was constricted by the plastic ring and developed an unusual, figure-eight shape. In 1993, when she was about nine years old, someone found her and brought her to the Saint Louis Zoo where the ring was removed.

They named her Peanut because of her shell's shape and gave her to staff at MDC. Peanut has been under the care of MDC since then, where she has served as a popular ambassador for litter awareness.

Earlier this year, staff at MDC’s Powder Valley Nature Center, where Peanut lives, began noticing that something was “off” about her behavior. “Over a period of a couple of months she started losing appetite and not eating very aggressively. She was just laying around more in the tank and obviously did not feel well,” said Powder Valley Nature Center Manager Tamie Yegge.

MDC staff brought Peanut to the Saint Louis Zoo for tests. According to Dr. Hanley, initial radiographs and blood work were inconclusive. However, ultrasound imaging confirmed a large number of follicles on Peanut’s ovaries that had not yet fully developed into eggs. When this occurs, turtles will typically reabsorb the material or lay infertile eggs. “The problem is they appeared to be ‘stuck’ as in not being ovulated or reabsorbed,“ said Dr. Hanley.

The trapped follicles, which ended up weighing 10% of Peanut’s total body mass, were crowding her digestive system, preventing her from eating properly. The extra weight and lack of appetite were also dangerously stressing her other organs like the liver and lungs. Dr. Hanley speculated that Peanut’s mis-shapen shell may have contributed to the undeveloped follicles not being able to pass properly.

After a waiting period of 30 days to see if the follicles might move or resorb on their own, Dr. Hanley decided that surgical intervention to remove the follicles and ovaries would be the best form of treatment.

Dr. Hanley and his team performed the surgery at the Saint Louis Zoo’s hospital on May 4 where he successfully removed the follicle-filled ovaries using an endoscope to assist with the operation. The endoscope enabled the surgical team to enter through one small incision without having to cut into her shell. After an overnight stay at the Zoo, Peanut returned to her home at Powder Valley the next day.

“She showed a lot more energy as soon as she returned, and she started eating crayfish and worms again,” reported Yegge. Peanut’s lung expansion has nearly doubled since the surgery as there is now more room inside her shell. Yegge said that MDC staff will carefully monitor Peanut and administer antibiotics for the next four weeks, then take her for one more visit to the doctor in about two months to have the sutures removed.

The 36-year old turtle is now on the road to recovery and poised to resume her mission as an animal ambassador for litter awareness.

“I was very happy and humbled to be able to help determine and fix the problem,” Dr. Hanley said. “We as humans did wrong by her and the opportunity to give her a new chance at life is rewarding. I’m very excited to be part of it. I always like to do right by animals.”

“Everybody’s really excited she’s doing better,” said Yegge. “We’ve been taking care of her for so long and she’s kind of a celebrity. We’re so happy that we could do something to help prolong her life, and we are so grateful for the services provided by Dr. Hanley, his team, and the Saint Louis Zoo.”

Though the nature center building currently remains closed due to COVID-19 considerations, those wishing to send Peanut get well cards and wishes are encouraged to mail them to: Powder Valley Conservation Nature Center, 11715 Cragwold Road Kirkwood, MO, 63122. The nature center trails remain open for public use.