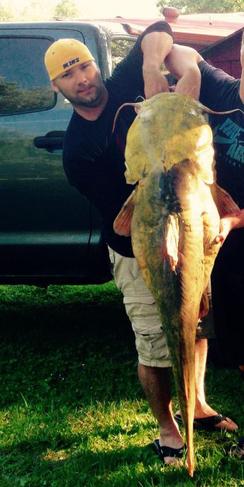 Caption
Anthony Stacy of Farmington is shown here with the 83-pound catfish he took by illegal methods last summer.
1/1
Image 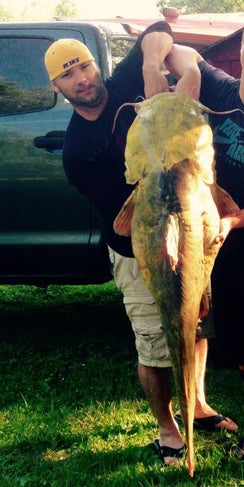 Is user submitted
Caption
Anthony Stacy of Farmington is shown here with the 83-pound catfish he took by illegal methods last summer.
News from the region
Southeast
By
Candice Davis
Published Date
06/02/2016
Body

CAPE GIRARDEAU, Mo. – The Missouri Department of Conservation (MDC) says fifteen seconds of fame garnered from “reeling in” an 83-pound catfish wasn’t earned by the man who made many news outlets last summer with an 83-pound catfish. After a lengthy investigation, a Missouri conservation agent proved the story wasn’t completely true. Anthony Stacy of Farmington pleaded guilty last week in Reynolds County to two counts of illegally shooting flathead catfish with bow fishing equipment. One was the 83-pound catfish spread across the news and the other was a 50-pound catfish. Stacy has 13 additional wildlife violation cases pending in the courts of St. Francois and Jefferson counties, according to MDC.

“Based on research on other fish taken in our state, I would guess that 83-pound catfish was somewhere around 25 years old,” said Dave Knuth, a MDC fisheries management biologist. “Unfortunately, due to the way the fish was taken and that we don’t have access to it, we’ll never know exactly how old it was.”

In June of 2015, news sources across southeast Missouri reported the story of how the 83-pound flathead catfish was caught by limb lining on Clearwater Lake.  However, St. Francois County Conservation Agent Tyler Harding learned Stacy took both catfish by shooting them with a bow. Throughout Harding’s investigation, the other wildlife violations surfaced as well.

Stacy received five citations total in Reynolds County for assisting to take three bass and two flathead catfish during two separate trips to Clearwater Lake.  All five of the fish were taken by bow fishing, which is not a legal method to take game fish.  On May 18, in Reynolds County Court, Stacy entered a guilty plea to a plea bargain of two counts of taking game fish by illegal methods.  Three counts of the same charge were dropped due the plea bargain.  Stacy was fined $500. He has also had three prior conservation violations in Missouri.

Game fish, as defined in the Wildlife Code of Missouri, may not be taken by bow fishing methods. Bow fishing is a legal method in Missouri for the harvest of non-game fish only.

“This man’s actions took away the potential for a fishermen to legally catch a once in a life-time fish,” Harding said. “However, most hunters and anglers are law-abiding citizens who want their catches to be ethical. That’s what makes a good outdoorsman and that’s the kind of legacy we need in order to keep Missouri as a great place to hunt and fish.”

For more information on fishing regulations in Missouri, go online to mdc.mo.gov/fish.