MDC: Risk of encountering stinging caterpillars in Missouri is minimal 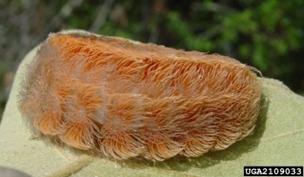 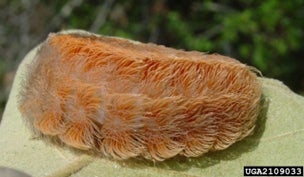 According to Lawrence, the chances of encountering a venomous caterpillar in Missouri are minimal, due to a small population of these specific caterpillar species.

"Their populations fluctuate from year to year, but occasionally one type will have an outbreak, such as the puss caterpillar's fluctuation in Florida this year," he said.

Of mopre than 1,000 individual species of caterpillars in Missouri, Lawrence said there are about 15 species that are known to be present in Missouri with some sort of venomous capacity.

The species that can deal the most painful sting or severe reaction in Missouri is the puss caterpillar (Megalopyge opercularis), also known as the flannel moth caterpillar. This is the same caterpillar featured in the news in southern states recently because of the surprising high populations occurring there this year.

"No head or legs are visible when it's in its usual position and the stinging hairs are hidden within its mass of 'fur,'" he said.

Lawrence said one of the most unusual looking of the stinging caterpillars in Missouri is the hag moth caterpillar (Phobetron pithecium), also called the monkey slug.

"It looks like some sort of brown, hairy, alien being with several pairs of hairy arms projecting out from its body," Lawrence described.

But these few venomous species of caterpillars are drastically outnumbered by their harmless relatives. Lawrence said it's important to remember the value caterpillars hold in pollinating Missouri's many plants, and as a food source for many birds, other insects and animals.

"We often have a love-hate relationship with caterpillars," he said. "Butterflies are beautiful, and it's fun to try to raise caterpillars until they turn into a butterfly or moth. Most caterpillars are harmless to humans and pets and can be safely handled, but some are not."

He said it's also a good practice to get to know some of the common species that reside in our area, by researching them online at sites like discoverlife.org, whatsthatbug.com, and bugguide.net.

Stings from some venomous caterpillars can be quite painful, but not deadly, according to Lawrence. Stings can be covered in scotch tape to remove any remaining spines, and then washed thoroughly with soap and water to clean the wound. Applying ice or baking soda may help reduce the pain. Lawrence said stings should be observed to ensure allergic reactions don't occur, which could require medical attention.

Lawrence said there are some common caterpillars that look threatening but are harmless and interesting to hold. One example is the hickory horned devil (Citheronia regalis), which is a very large green caterpillar with bright orange horns that feeds on leaves of hickories and other hardwood trees.

"Overall, caterpillars are fun and interesting creatures we have the opportunity to witness in nature," Lawrence said. "A person could spend time outdoors and go through their whole life without encountering one of these stinging caterpillars. They just aren't too common in Missouri. It'd be a shame for someone to discount the whole lot of these fascinating little insects because of a few stingers."