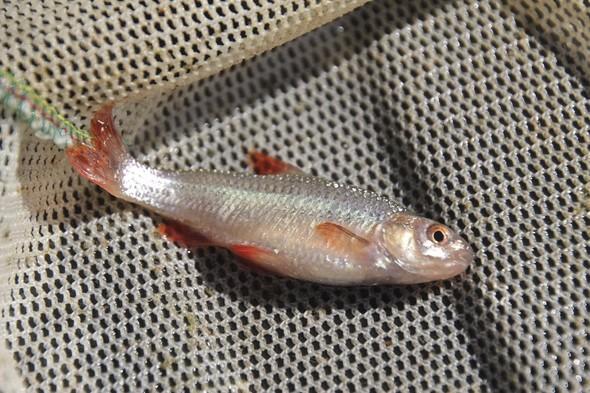 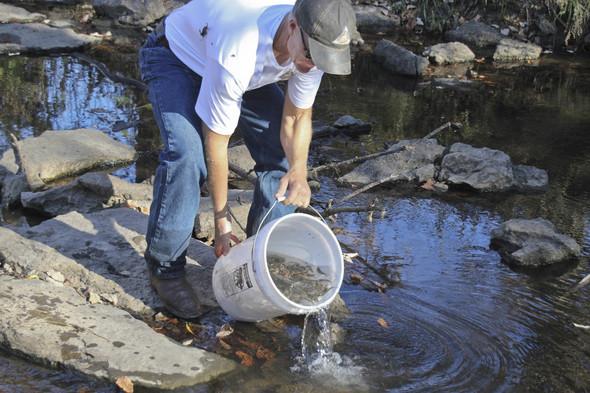 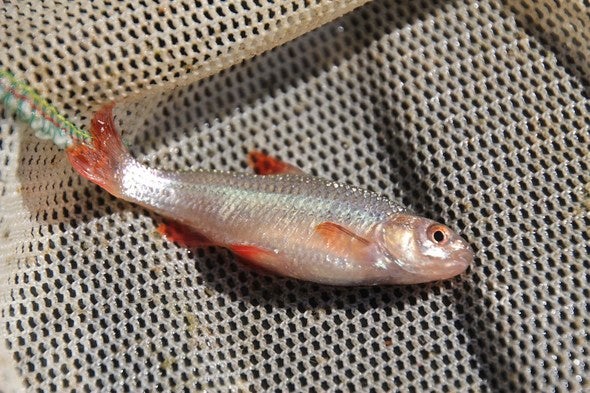 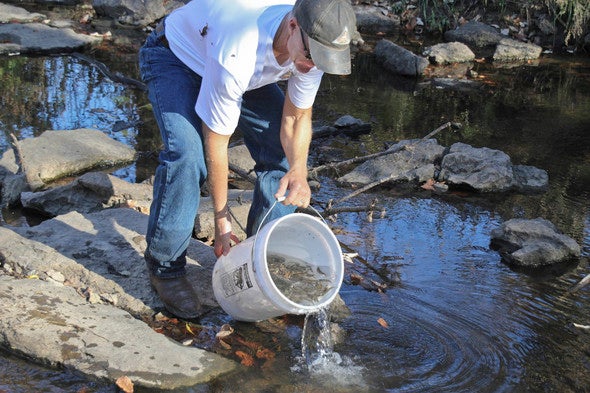 Eagleville, Mo. – Jerry Wiechman poured hatchery-reared Topeka shiners into a narrow stream flowing in a grassy swale beneath a Pawnee Prairie ridge. The minnow-sized fish swam upstream in the clear water, a seep- and rain-fed headwater creek with fishes, amphibians and insects, a prairie brook often hidden by overhanging willows and native grasses. The shiners are reinforcements in the Missouri Department of Conservation’s (MDC) efforts to restore this endangered species in upland headwaters of the Grand River Grasslands in northwest Missouri. The first stocking was in 2013 for an experimental reintroduction program, and monitoring here and at other waters show the shiners are surviving and reproducing.

“There are signs that the distribution is expanding and we have reproduction,” said Wiechman, MDC fisheries management biologist. “So that’s positive.”

Topeka shiners are both state and federally endangered because their numbers dropped sharply in the prairie states. They dwindled to only two known streams in Missouri, possibly due to land use changes and barriers to fish movement such as dams and certain culverts. One small population remained in Sugar Creek in Harrison County. Fish from Sugar Creek were used as a parent group to hatch and rear the shiners at MDC’s Lost Valley Fish Hatchery in Warsaw.

This year, the Lost Valley Fish Hatchery produced a large number of Topeka shiners. The abundance enabled another stocking on Nov. 3 of 5,000 shiners in Little Creek at Dunn Ranch in Harrison County, which is owned by The Nature Conservancy. Another 2,000 shiners were released into the East Fork of Big Muddy Creek at MDC’s Pawnee Prairie Conservation Area, and at a tract of Pawnee Prairie owned by the Conservancy. These reintroductions are officially classified as non-essential experimental populations along with Topeka shiners stocked this year in Spring Creek at MDC’s Union Ridge Conservation Area in northeast Missouri. Given this classification, the presence of those fish poses no additional limitations on private property usage or liability to landowners.

Also on Nov. 3, another 16,000 Topeka shiners were released in tributaries of Sugar Creek, such as Tombstone Creek near Gilman City in southeast Harrison County. Those fish were returned to the stream drainage that provided the original parent stock for the hatchery. The streams vary in size, but most have year-round water flow with pools and riffles. Some flow past limestone bluffs. Strong groundwater flow from the limestone karst, springs and seeps, may have helped Topeka shiners survive in the Sugar Creek drainage, Wiechman said.

Bringing Topeka shiner populations back in other Harrison County waters is a partnership between MDC, The Nature Conservancy, the U.S. Fish & Wildlife Service and private landowners. The goal is a fully functioning grassland ecosystem, one with healthy waters and productive for farming, fish and wildlife.

“Healthy stream habitat, especially headwater prairie streams, is one of the rarest ecosystems we have on the plains,” Wiechman said. “Topeka shiners were once one of the common components.”

Headwaters are the rivulets and streams that flow from ridges and hills into the larger creeks and rivers in the valleys. While small, many have a handful to more than a dozen species of fish, often small, but part of the web of life that eats insects and gets eaten by wildlife and other fish.

MDC is working with partners to manage grasslands in ways that keep stream ecosystems healthy. Private landowners in the Grand River Grasslands can take advantage of special programs such as enhanced cost share for common conservation practices, grants, expertise and easement payments. For instance, projects such as utilizing native warm season grasses in forage systems or fencing livestock away from streams can provide cost-sharing funds and enhance profitability.

“One of the other beauties of working with this species is that rather than being restrictive for landowners, they offer more conservation dollars for benefits to farms, such as decreasing soil erosion and improving water quality,” Wiechman said.

For more information about MDC conservation assistance on your property, visit https://mdc.mo.gov/property. For information on Topeka shiners, visit http://on.mo.gov/2fMIAYQ.