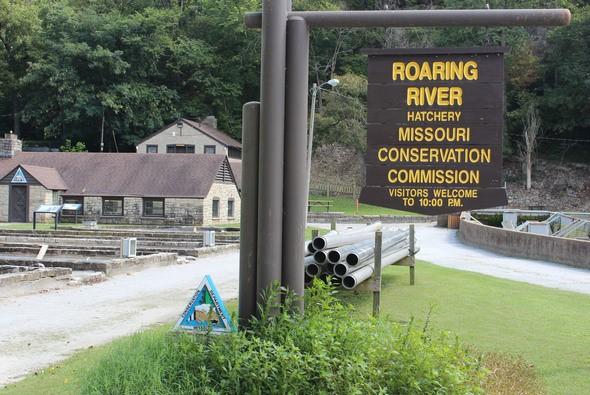 Caption
A Sept. 21 ground-breaking ceremony will kick off a winter of construction at the Missouri Department of Conservation's Roaring River Hatchery in Barry County near Cassville. The hatchery will be shut down and water will be drained from the hatchery pools, but all fishing activities at the park will go on as scheduled.
Credit
MDC
Right to Use
1/1
Image 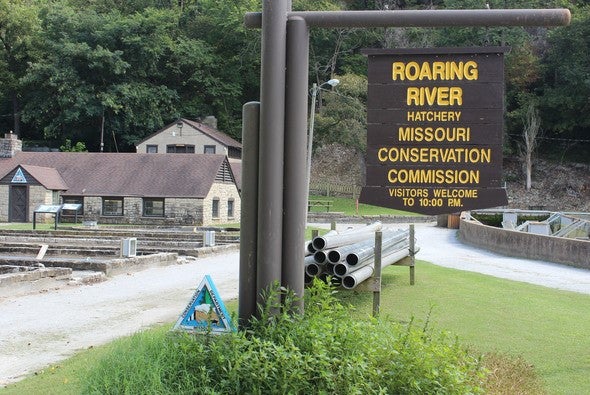 Is user submitted
Caption
A Sept. 21 ground-breaking ceremony will kick off a winter of construction at the Missouri Department of Conservation's Roaring River Hatchery in Barry County near Cassville. The hatchery will be shut down and water will be drained from the hatchery pools, but all fishing activities at the park will go on as scheduled.
Credit
MDC
Right to Use
News from the region
Southwest
By
Francis Skalicky
Published Date
09/12/2018
Body

CASSVILLE, Mo. – The installation of state-of-the-art technology at the Missouri Department of Conservation’s (MDC) Roaring River Hatchery will ensure that one of Missouri’s oldest trout parks will remain a premier destination for family fishing fun.

Cutting-edge innovation will merge with trout fishing tradition Sept. 21 when MDC breaks ground on a $1.9 million renovation project at the hatchery, which is located in Barry County in southwest Missouri. The public is invited to join MDC Director Sara Parker Pauley at the ground-breaking ceremony, which will start at 10 a.m. at the hatchery.

The project involves replacing existing flood control structures at the hatchery’s spring pool falls with electric, corrosion-proof, stainless-steel gates. The flood control structure at the spring’s entrance will also be replaced and a leak-proof pipeline will be installed (replacing an existing line) to feed the hatchery. All water-control valves within the spring pool will be replaced with stainless steel. Water will be drained from the hatchery, which will allow for other maintenance updates, as well.

The highlight of this refurbishing project will be a self-cleaning screen that will automatically clean debris from the water before it reaches the hatchery. This will be the first time this technology – known as a traveling screen – will be utilized in state-owned hatcheries in Missouri.

When asked what’s needed for a good trout-fishing trip to Roaring River State Park, few anglers would say a UV-resistant polymer traveling screen. Electrical stainless-steel gates wouldn’t make many fishing must-have lists, either. While these may not be essential items for a tackle box, they are vital components of a cold-water hatchery’s infrastructure that will help ensure trout supply keeps up with demand at this popular fishing destination.

“Corrosion is a big enemy of many of the components used to divert water throughout fish pools at a hatchery,” said MDC’s Paul Spurgeon, who is the Roaring River Hatchery Manager. “Aging aluminum gates in the hatchery were close to the end of their life due to corrosion. Failure of any of the flood-control measures could be catastrophic to the hatchery during a large flood event. Stainless-steel structures will ensure many more years of safe successful hatchery operations."

“Clean, debris-free water is vital to the raising of fish,” he added. “The new technology of a traveling screen will save many hours of labor that occurs during flooding or harsh weather conditions. Our hatchery staff will be much safer and the hatchery will be much more efficient.”

During the project that’s scheduled to run from late September through the spring of 2019, the hatchery will be shut down and dried up. Existing fish will be moved to MDC hatcheries at Shepherd of the Hills, Montauk State Park, and Bennett Spring State Park during this period. Trout will start being brought back in March. Though the hatchery will be closed during the renovation project, anglers will not see any changes to existing seasons. Fish will still be stocked daily during the remainder of the regular season and the winter catch-and-release season will also be unaffected.

Up to 500,000 trout are raised from egg to fingerling at the hatchery annually and the hatchery stocks 260,000 12 ½-inch in the stream each season. However, the benefits of these upgrades go beyond improving fish production procedures at Roaring River Hatchery. To get the true significance of the infrastructure improvements, consider the 110,000 people who fish at Roaring River, the thousands of visitors the park gets and the economic ripple effect all this activity generates in terms of money spent on meals, lodging, gas, etc. A 2011 U.S. Fish & Wildlife Service study showed that for every dollar invested in support of this type of fishing activity, 28 dollars are returned to local and state economies.

“The Missouri Department of Conservation is glad to be part of Roaring River State Park and its unique role as a premier trout-fishing destination,” Spurgeon said. “We are very appreciative of the outstanding support we receive from the anglers, visitors and the local communities.”

Trout-rearing at Roaring River has a history dating back to 1910 when the first hatchery (a privately owned facility) was built. Currently, MDC manages the hatchery and trout fishing at Roaring River; the state park facilities are managed by the Missouri Department of Natural Resources.