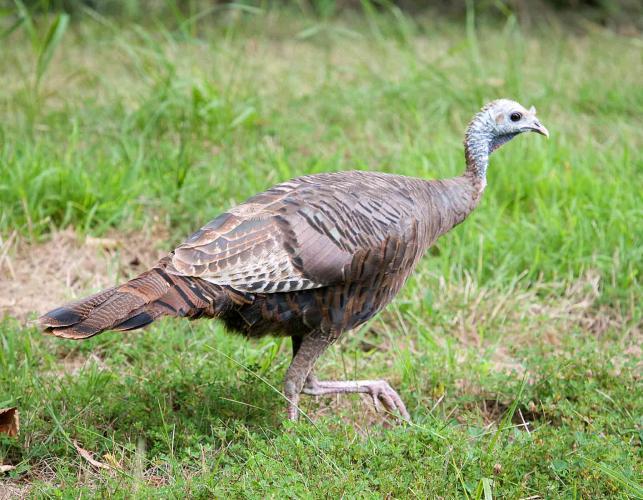 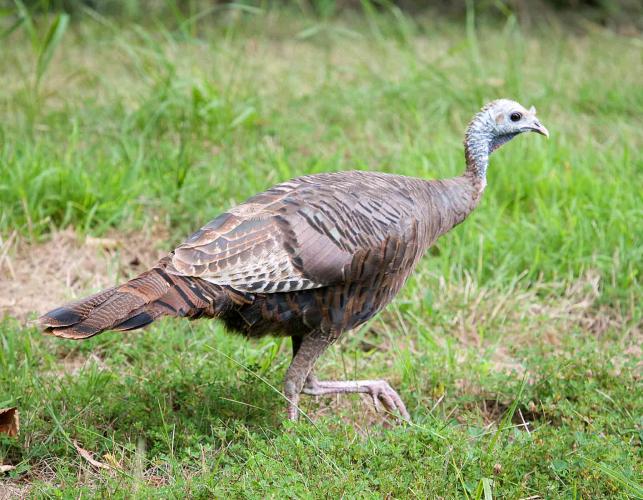 WHY AM I SEEING FEWER TURKEYS ON THE LANDSCAPE?

“The number of turkeys we see is driven primarily by production, not survival or harvest of adult turkeys,” explained Tyl. “Production refers to the number of new young turkeys, or poults, that are added into the turkey population each summer. One of the main objectives of MDC’s annual Wild Turkey Brood Survey is to calculate a poult-to-hen ratio, which provides an index for how good production was that year. When we see greater poult-to-hen ratios, turkey numbers tend to increase or stabilize. When we see poor production, turkey numbers tend to decrease.”

According to Tyl, turkey numbers have not only been declining in Missouri over the last several decades, but also in neighboring states.

“Several factors have contributed to this long-term declining trend in production that we and other states across the eastern wild turkey’s range are observing,” she said. “Loss of quality nesting and brood-rearing habitat, changing weather, an increase in predators, and potentially lower insect abundance are likely all playing a role.”

Tyl said the best way to increase turkey numbers is to provide the habitat turkeys need to nest successfully and that also provides broods with quality forage. Planting native warm-season grasses and wildflowers, prescribed burning, edge feathering, timber stand improvement, and woodland restoration are some of the best ways to improve nesting and brood-rearing habitat.

“Quality habitat will provide everything a hen and her brood needs – food, water, and shelter from bad weather and predators,” said Tyl.

“What we’ve found is that if we closed the fall seasons entirely, being the most conservative scenario, turkey numbers would not substantially increase and would continue to decline in some parts of Missouri,” Tyl said. “We projected what we could expect turkey abundance to be five years into the future using our most recent estimates of survival and reproductive rates under two scenarios. The first scenario was what future turkey abundance would be under the current fall harvest rate of about one-percent and the second scenario was projected turkey abundance under a fall harvest rate of zero-percent – which is what we could expect if we closed the fall seasons. Future turkey abundance declined under both scenarios and was not significantly greater under the no fall harvest scenario.”

WHAT ABOUT REDUCING THE SPRING BAG LIMIT?

“Very few hunters harvest two turkeys during the spring season,” said Tyl. “Only about five-percent of spring turkey hunters fill their second tag. Therefore, if we reduced the bag limit in the spring to one turkey, it would take away considerable hunting opportunity and would have little impact on the overall number of turkeys harvested.”

WHAT ABOUT INCENTIVIZING REMOVAL OF TURKEY PREDATORS?

Tyl explained some populations of wild turkey predators have increased over the past few decades, and there have been an increasing number of requests to extend furbearer trapping and hunting opportunities.

As a result of the requests from a diverse group of stakeholders and expanding furbearer populations, MDC plans to review seasons to determine if any changes should be made to season length, timing, or both. During the review, MDC will consider furbearer populations, trapping opportunity, pelt prime-ness, and the desire of multiple user groups, including the potential for conflict with other seasons.

“Some folks have suggested implementing a bounty to encourage people to trap turkey nest predators; however, bounty systems can be costly and rarely have a measurable impact on reducing predator populations in a way that translates to a benefit for other species,” Tyl said.

While bounty systems may increase the reported take of various predators, there is often ample opportunity for fraud. Individuals may harvest animals from outside the bounty zone or collect and turn in roadkill for bounty payments. A better alternative to predator bounties would be to direct that money into habitat improvements.

“There have been broad-scale losses of quality nesting and brood-rearing habitat as herbaceous habitats, or land with grasses and non-woody plants and flowers, have been developed into agricultural lands,” she said. “In Missouri’s more forested areas, forest maturation due to a lack of active timber management has led to an abundance of closed-canopy forests that prevent the growth of herbaceous vegetation in the understory, which provides food and cover for turkeys. This has created a landscape that makes it easier for predators to locate and destroy turkey nests and that has fewer forb-dominated areas that are loaded with insects for poults.”

Tyl added that not all grasslands are created equal when it comes to brood-rearing habitat.

“Fescue-dominated fields might look like good turkey habitat, but the reality is that dense fescue is very difficult for young poults to move through,” she said. “Areas dominated by native warm season grasses and forbs have enough bare ground in between clumps of plants to facilitate easy poult movement while providing enough cover to conceal poults from predators.”

Tyl explained by improving wild turkey nesting and brooding habitat, landowners and managers can create a landscape that helps turkeys, their nests, and poults avoid predation and improve their odds of successfully producing more turkeys.

“While we can’t control the weather, we can control the habitat,” she stressed. “More than 95-percent of Missouri land is privately-owned. MDC works with landowners and managers to improve wildlife habitat, including for wild turkeys.”

For more information on improving land for wildlife, visit https://mdc.mo.gov/your-property/improve-your-property.

Learn more about wild turkeys in Missouri from the MDC online Field Guide at https://mdc.mo.gov/discover-nature/field-guide/wild-turkey.