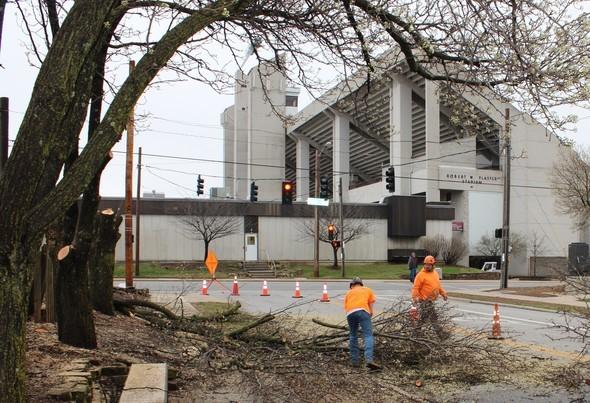 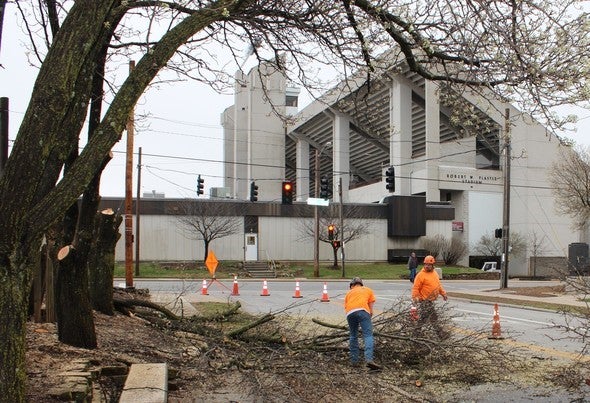 SPRINGFIELD, Mo. – Funding from the Missouri Department of Conservation (MDC) is helping Missouri State University (MSU) get rid of a species of tree that can be troublesome for both humans and native plants.

In mid-March, 24 Callery pear trees were removed from the portion of the campus that lies along Grand Street. This tree removal project was funded through a Tree Resource Improvement and Maintenance (TRIM) grant from MDC. Hansen’s Tree Service was contracted by MSU to do the work. This is the first phase of a larger plan to eventually remove all Callery pear trees from MSU’s campus. But this project will have benefits that ripple far beyond MSU.

A Callery pear’s white flowers are eye-catching, but underneath those pretty blossoms lurks an invasive tree that can cause problems for native plants and native habitats. Many people refer to all Callery pear trees by the name of one its most popular cultivars – the “Bradford pear.” Whatever name is used for this nonnative tree, its showy flowers in spring, vivid color in fall, and quick growth are the primary reasons it became popular. At least 25 genetically unique cultivars have been developed. Because they cannot fertilize their own cultivar, they were considered sterile. However, now that multiple cultivars are present, cross-pollination occurs and fruit develops. Birds eat the fruit and spread the seeds in droppings. This results in the spreading of an invasive tree that can crowd out native trees and plants and, in the process, harm wildlife habitats.

Eliminating fast-spreading Callery pear trees from fencerows and pastures can be expensive and time-consuming. These trees also have downsides as ornamental vegetation in urban lawns. The wood is weak and the trees frequently fall victim to wind, ice, and storms.

“Callery pear trees have a very weak branch angle attachment, which causes them to be very susceptible to breakage,” said MDC Community Forester Cindy Garner. “These trees provide no benefit to our native pollinators. They have also become very invasive – our native species of understory trees and shrubs cannot compete with the Callery pear’s aggressiveness.”

Projects like MSU’s removal of Callery pear trees from its campus helps to reduce this problem by eliminating trees that can serve as sources of proliferation.

“Callery pear trees have been identified as invasive and we want to do what we can to reduce the impact of Callery pears and their spread,” said Jason Rhea, Assistant Director of Facilities Management at MSU. More information about MSU’s tree removal plans can be found at https://www.missouristate.edu/facilities/tree-management.htm

TRIM grants such as the one that’s funding the MSU project are available to any municipality, non-profit organization, or public school. More information is available at mdc.mo.gov/trim.

More information about callery pears and the problems they cause can be found at mdc.mo.gov and also in this PSA, https://www.youtube.com/watch?v=blJRcmeCQ-0.