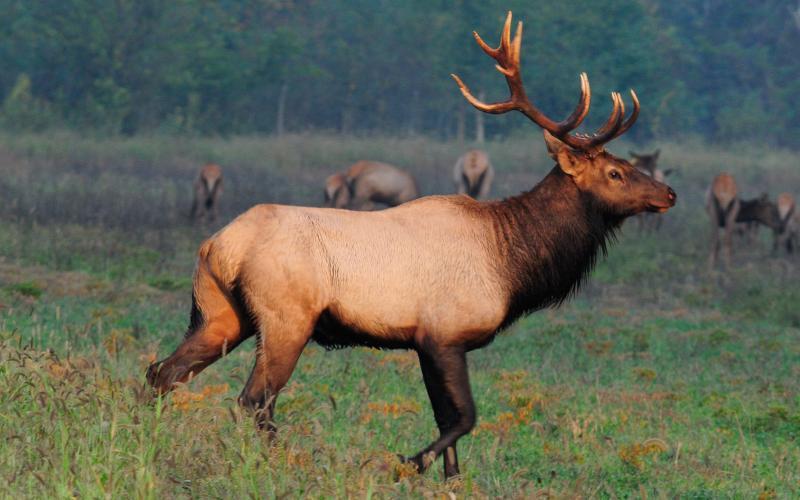 Caption
This image of a bull elk was taken at Peck Ranch Conservation Area in the Missouri Ozarks. MDC is proposing the framework for a limited elk hunting season and is asking for public comments at short.mdc.mo.gov/Z49.
Credit
MDC
Right to Use
1/1
Image 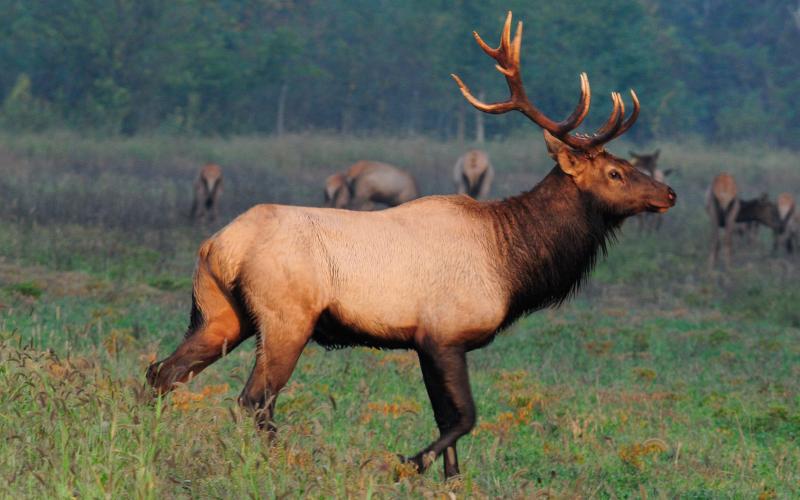 Is user submitted
Caption
This image of a bull elk was taken at Peck Ranch Conservation Area in the Missouri Ozarks. MDC is proposing the framework for a limited elk hunting season and is asking for public comments at short.mdc.mo.gov/Z49.
Credit
MDC
Right to Use
News from the region
Statewide
By
Joe Jerek
Published Date
06/28/2019
Body

According to MDC Elk and Deer Biologist Aaron Hildreth, who presented the elk-hunting plan at the meeting, MDC will begin offering a limited season for hunting elk once the herd of about 175 animals reaches a minimum of 200 with an annual herd growth rate of at least 10 percent and a herd ratio of at least four cow elk for every bull elk.

Hildreth noted that the number of permits for a possible 2020 hunt has yet to be determined.

“If the elk population is below desired numbers in early 2020, the Conservation Commission may choose to not open the online application process or issue any permits for a fall 2020 hunt,” he explained. “We will then focus on 2021.”

MDC hopes to eventually reach a target population of 500 animals and will use hunting to manage herd size and location.

Elk are a native species in Missouri but were hunted to extinction in the state through unregulated market hunting during the late 1800s. MDC worked with the Kentucky Department of Fish and Wildlife Resources to reintroduce the native species by capturing and transporting wild elk from Kentucky to a remote area of the Missouri Ozarks. The reintroduction effort took place in 2011, 2012, and 2013 with most of the 108 relocated animals being cow elk with some calves and immature bulls. Their numbers have grown, and their range has expanded in recent years to cover portions of Carter, Reynolds, and Shannon counties. The area consists of nearly 80 percent public land interspersed with tracts of private property.

Under MDC’s framework, elk hunting would be limited to Missouri residents at least 11 years of age who have their hunter-education certification or are exempt from hunter education by age (born before Jan. 1, 1967). Hunting permits would be assigned through a random lottery of all applicants. MDC will require a $10 application fee to be eligible for the limited hunt with a $50 permit fee for those selected through the lottery. MDC will limit the random lottery to one application per-person, per-year with a 10-year “sit-out” period for those drawn for a permit before they may apply again.

The hunting zone will be limited to Carter, Reynolds, and Shannon counties, but will exclude the special refuge portion of Peck Ranch Conservation Area where elk were initially reintroduced.

He added that the timing of the seasons was designed to avoid the peak of elk breeding during late September and early October and to avoid the elk season coinciding with portions of the firearms deer season.

“The allowed hunting methods for each season will be the same as for deer hunting,” Hildreth said. “The permits will allow for the harvest of one bull elk with at least one antler being greater than six inches in length. Successful hunters must Telecheck their harvested elk, like for deer.”

According to MDC, local landowners have been supportive of the reintroduction of elk to the area and local communities have benefited from an increase in tourism related to elk.

MDC will reserve at least one permit from the annual random lottery for resident landowners with at least 20 acres within a specified boundary within Carter, Reynolds, and Shannon counties. The special landowner permits will be nontransferable and may only be filled on the landowner’s property.

“Qualifying landowners will not be required to pay the $10 application fee but will still pay a $50 permit fee if selected,” Hildreth said. “If selected, they will not be required to wait 10 years before again applying for the landowner permit. Qualifying landowners may apply once each year for a regular hunting permit and for a special landowner permit but may receive only one permit annually.”

Public Comments and Next Steps

As part of the rulemaking process, MDC is now again asking for public comment on the proposed elk-hunting framework through Aug. 31 at short.mdc.mo.gov/Z49. Refer to the following specific proposed rules open for comment.

The Commission will consider input received during this public comment period and make a final decision to move forward, modify, or withdraw the proposed framework during its Oct. 11 meeting.

If the framework is approved, MDC staff will then compile and review biological data on herd size, growth, and structure to determine if the inaugural hunt will occur in 2020. If the data supports a hunt for 2020, MDC staff will then present their recommendations on permit numbers to MDC’s Regulations Committee and Conservation Commission early next year.

MDC staff will continue to use biological data on herd size, growth, and structure in future years to determine the number of permits issued for each season.

Learn more about elk restoration in Missouri at short.mdc.mo.gov/ZYJ