Hummingbirds gone from feeders? They'll be back 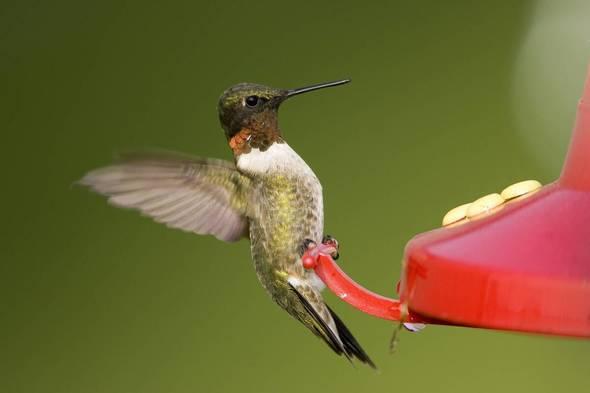 Caption
The ruby-throated hummingbird with blurred wingbeats and the ability to hover in the air is a fascinating visitor to flower gardens and home bird feeders.
1/1
Image 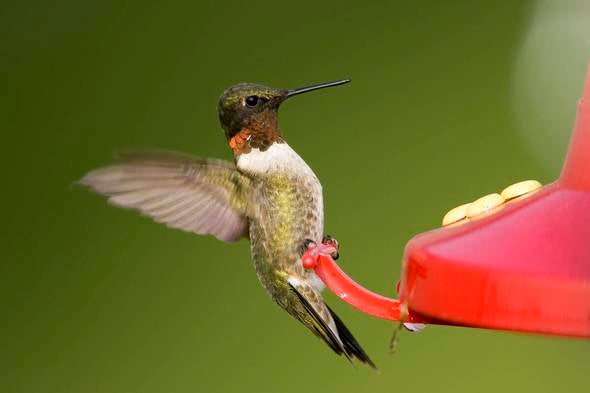 Is user submitted
Caption
The ruby-throated hummingbird with blurred wingbeats and the ability to hover in the air is a fascinating visitor to flower gardens and home bird feeders.
News from the region
Kansas City
By
Bill Graham
Published Date
06/17/2016
Body

Kansas City, Mo. – The ruby-throated hummingbird with blurred wingbeats and the ability to hover in the air is a fascinating visitor to flower gardens and home bird feeders. But each summer they seem to mysteriously vanish from some yards. They will return, says Larry Rizzo, Missouri Department of Conservation (MDC) natural history biologist.

“Many people see ruby-throated hummingbirds in spring when they are migrating,” Rizzo said. “Even more common is seeing them at feeders from late July through late September when young are fledged and joining the population and fall migration gets underway, so birds from the north move in. But during the height of nesting season, from mid-May through late July, the birds are often scarce and not visiting feeders. It’s just an indication you don’t have nesting hummingbirds close by.”

If weeks have gone by without a hummingbird sighting, he recommends taking the feeder down for now. But hummingbird feeders should go back up by mid-July.

“Birds will reappear by the first of August,” Rizzo said.

A reminder, creating hummingbird “nectar” for a feeder requires 4-5 parts water to one part sugar. Heat the mixture until the sugar dissolves into solution. Do not use or add a red dye to the nectar.

In late summer and fall, keep an eye out for Rufous hummingbirds that are sometimes seen migrating through western Missouri from July through November. Anna’s hummingbirds and a few other western species sometimes migrate through Missouri, too. Hummingbird feeders can be kept up into late autumn to provide food for any late-migrating or unusual species.