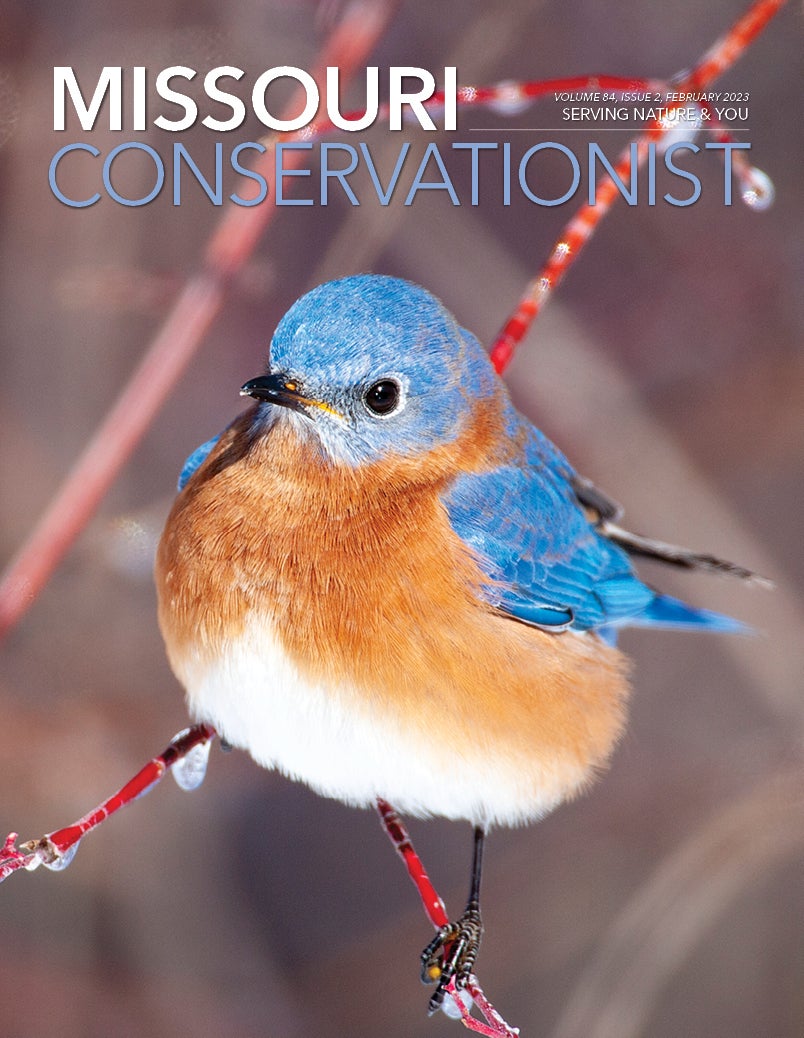 Positioned roadside along Loess Bluff National Wildlife Refuge’s (NWR) Snow Goose Pool, Dale Garrett stood patiently — outfitted in insulated overalls and trapper hat to protect himself from the sub-freezing wind chills — with his telephoto lens trained on a lone juvenile bald eagle perched in a nearby tree, waiting for the bird to take flight.

“It’s great today,” Garrett said of the photography opportunities. “I mean, we’re getting some pretty nice shots … there’s three or four or five eagles out there right now hunting for ducks.”

With his wife, Kay, who is also a photographer, Garrett made the trip from his home in Mountain View, Arkansas, to spend several days at Loess Bluffs NWR near Mound City in northwest Missouri. At 64, Garrett can remember a time when the single eagle in the tree might have warranted such a drive to see, but today, Loess Bluffs NWR is one of several areas of Missouri where one might — on the right day — observe hundreds of bald eagles on the landscape.

Decline of a National Symbol

In 1782, when Congress adopted the Great Seal of the United States — featuring the bald eagle with wings outstretched — as the national symbol, there was an estimated 100,000 nesting pairs of bald eagles in the continental U.S. By 1963, that number had fallen to 417.

While much is made of the effect that dichlorodiphenyltrichloroethane (DDT) — a synthetic insecticide developed in the 1940s — had on eagle populations in the mid-20th century, the bird’s plight began both nationwide and in Missouri nearly a century earlier, according to MDC Avian Ecologist Janet Haslerig.

“You have to remember that with DDT, it affected, of course, bald eagles and other raptors,” Haslerig said. “But in Missouri, that impact wasn’t quite there for bald eagles. Our decline was before DDT.”

Habitat loss, the indiscriminate killing of eagles — which were thought by some to be a threat to livestock — and the overharvest of the waterfowl on which the bald eagle commonly preyed combined to take a toll on bald eagle populations beginning as early as the mid-19th century. By 1890, the nesting population of eagles in Missouri was virtually non-existent.

The introduction of DDT, which contributed to the diminishing success of eagle reproduction, was the final blow that pushed the eagle to the edge.

Even before the introduction of DDT, conservationists had noted the plight of the bald eagle and steps were underway to reverse the trend. In 1940, Congress passed the Bald Eagle Protection Act, which prohibited selling, killing, or possessing a bald eagle. The act was later amended to include the golden eagle and renamed the Bald and Golden Eagle Protection Act. The amendments expanded the types of protection provided, including a prohibition against owning parts of the birds, their nests, or eggs.

The early 1970s saw two significant developments in the protection and resurgence of bald eagles: the Environmental Protection Agency ban of DDT in 1972 and the inclusion of the bald eagle for protection under the Endangered Species Act. Federal protections and the ban on DDT helped stop the decline in eagle numbers, but it would take more to restore the population.

Simply addressing the threats that had faced eagles for nearly a century helped but stabilizing the eagle population would take a more direct approach. The U.S. Fish and Wildlife Service (USFWS) and state conservation agencies across the country began captive breeding and restoration programs in the 1980s. In Missouri, MDC partnered with USFWS and Dickerson Park Zoo in Springfield to release 74 young bald eagles at Mingo National Wildlife Refuge, located near Puxico in southeast Missouri, and Schell-Osage Conservation Area (CA) near El Dorado Springs in west-central Missouri. The effort proved to be the needed springboard for reestablishing a nesting population in Missouri, Haslerig said.

“I think that reintroduction jumpstarted the increase in population,” she said. “From 1980 to 1991, we banded 74 eaglets and released those. And I think that was the jumpstart, because when you do that, those eagles are going to return to that general area to nest. So that was the beginning.”

From that beginning, both in Missouri and nationwide, the resurgence began. In 1982, Missouri documented its first successful nest at Truman Lake, just east of Schell-Osage CA. In 2007, the bald eagle was removed from Endangered Species Act protection, although it remains a protected species under the Bald and Golden Eagle Protection Act and the Migratory Bird Treaty Act.

MDC surveys from 2006 through the present have documented a steady growth in the number of nesting pairs in the state, increasing from 123 active nests in 2006 to 630 nests in 2022. In 2021, USFWS released a study estimating a total eagle population in the lower 48 states of 316,700 eagles, including 71,467 occupied nests.

As the nesting population of eagles continues to grow, Missouri also sees an influx of visitors each winter — migrating eagles in search of food no longer available in the frozen north. Missouri’s abundance of non-frozen waterbodies draws the birds. The presence of open water means access to fish and waterfowl, two of the eagle’s main food sources, Haslerig said.

“We’ve got open water,” she said. “We’ve got Truman, we’ve got Bagnell Dam, we’ve got a lot of water spaces that stay open in the wintertime, and that’s the main thing that they need is a water source for food.”

Between nesting pairs and migrating birds, Missouri’s winter eagle population averaged roughly 2,500 birds between 1993 and 2022 but swelled to nearly 3,700 in January 2022, she said.

As with many things, the weather plays a big part in Missouri’s eagle population. The earlier and harder the freeze in northern states, the larger the eagle count here, said Darrin Welchert, wildlife biologist at Loess Bluffs NWR.

The refuge has a 20-year average of approximately 235 eagles during the peak, but a January 2022 survey estimated more than 830 eagles on the refuge.

“The numbers come up and down, but there’s a lot of things that factor into that,” Welchert said. “It kind of depends on the year, and a lot of that has to do with the waterfowl migration and what the freezing conditions are farther north of us.”

Not far from where Dale and Kay Garrett were stopped at Loess Bluffs NWR, Fred and Pam Hummelsheim had pulled over, their cameras trained on an eagle nest across the road from Snow Goose Pool. Pam eschews the word “experienced” to describe their birding prowess, preferring the more modest “enthusiastic.”

But it’s that enthusiasm that has taken them as far as Minnesota in search of owls and prompted them to pass several known eagle hotspots on their drive from their home south of St. Louis to Loess Bluffs NWR.

“It’s great, we like it,” Fred said. “There’s not many areas in the Midwest like this where you can do this, you know?”

At its peak, an estimated 2,500 bald eagles will make Missouri their temporary winter home. Occasionally, the experienced birding eye might spy the far less common golden eagle among those numbers.

“We’re one of the top states that have a big influx of bald eagles and with that comes golden eagles,” Haslerig said. “I always like to see how many golden eagles. It could be from one to 10 golden eagles in the state to be picked up during that survey.”

The resurgence of the bald eagle is often and appropriately lauded as one of the great American conservation wins for wildlife. From near extinction to nationwide restoration, the eagle story is one of success, but even now, bald eagles face threats to their survival. MDC Avian Ecologist Janet Haslerig identified the eight most common threats to bald eagles:

Lead poisoning — Eagles are scavengers, and as such, frequently ingest game that has been shot with lead bullets or pellets.

Powerline electrocution — The electricity we use has to get from the source to the end user, which can often lead to conflict with eagles.

Vehicle collision — As scavengers, eagles can be frequently seen roadside taking advantage of roadkill and putting themselves in harm’s way with passing traffic.

Climate change — The National Audubon Society estimates that by 2080 climate change, including more frequent drought, damaging winds, and extreme heat, could reduce the bald eagle’s summer range to only 26 percent of its current size, shifting virtually all the eagle’s breeding range to Alaska and Canada.

Wind turbines — Considered a source of renewable energy, wind turbines, with their long, spinning blades, are also a threat to bald eagles, other raptors, and birds.

Disease — Wildlife diseases, such as avian influenza, affect eagles as well as waterfowl and other raptors.

A childhood interest in bald eagles and other raptors has followed Jon Wilson into adulthood, but it was the rollout of the Eagle Watch Program, an MDC citizen science program that allows the department to better track the status of Missouri’s more than 580 known active eagle nests, that he found his way to contribute to the continued resurgence of the eagle in Missouri.

“I was always really fascinated with them, they’re just a beautiful bird, very unique,” Wilson said. “And so, when this program came up, it gave me an opportunity to do something more effective toward helping out the eagle cause.”

Program volunteers monitor assigned nests, with their finds used by MDC staff to determine bald eagle population and productivity trends. Monitors collect information on whether a nest is active, whether young are produced, and whether those young fledge.

Established in 2018, the program was born of necessity — the number of nests was overtaking the number of MDC staff available to keep tabs on them, said MDC Avian Ecologist Janet Haslerig, who coordinates the program.

Wilson was one of the first volunteers involved with the program, but most of the inaugural watchers were from Master Naturalist chapters from around the state, Haslerig said. Now, there are roughly 250 observers monitoring between 475 to 500 of Missouri’s estimated 587 active eagle nests.

While many program participants are assigned a single nest, Wilson, 40, of Marshfield, exceeds the average considerably, monitoring nests in eight to 10 counties in southwest Missouri.

“I’ve logged over 50 nests in southwest Missouri,” he said. “But they don’t always nest every year, so any given time, maybe 30 every year are active, and I find some. This season I found three more, so they’re constantly popping up different places.”

Additional information on the program is available online at mdc.mo.gov/eagle-watch-program. People interested in getting involved in the program can reach out to Haslerig at EagleWatch@mdc.mo.gov. 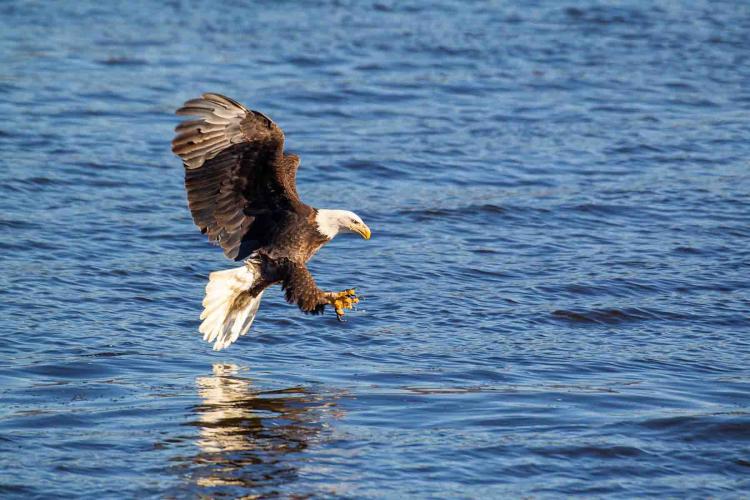 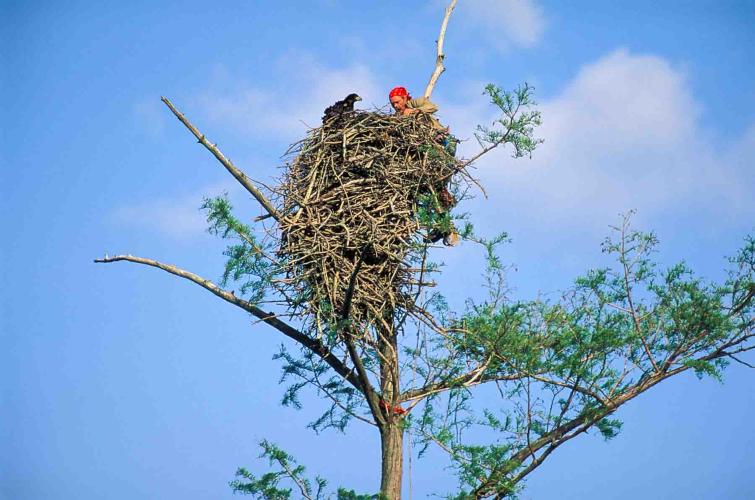 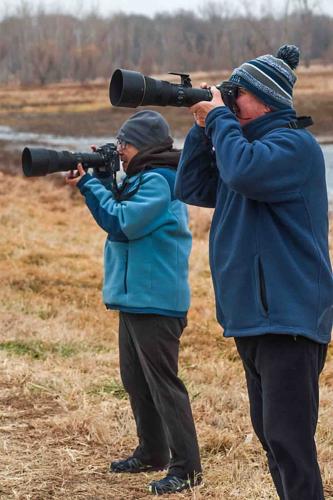 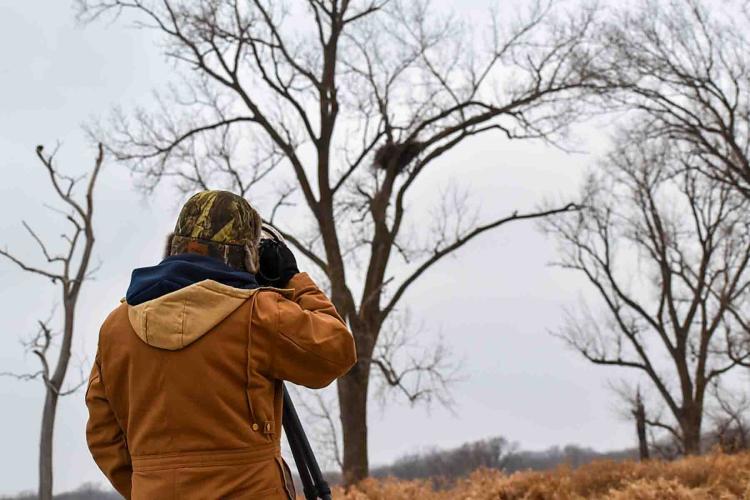 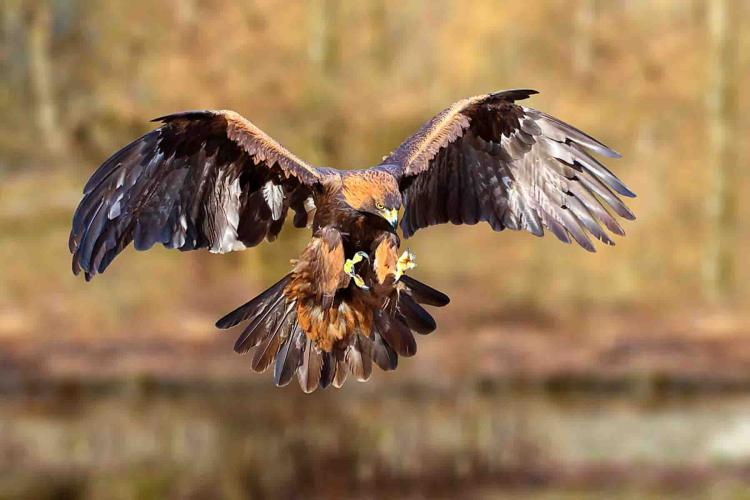 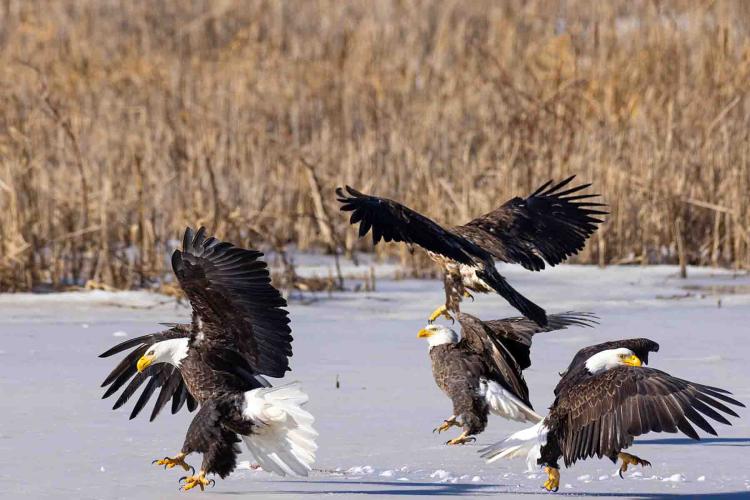 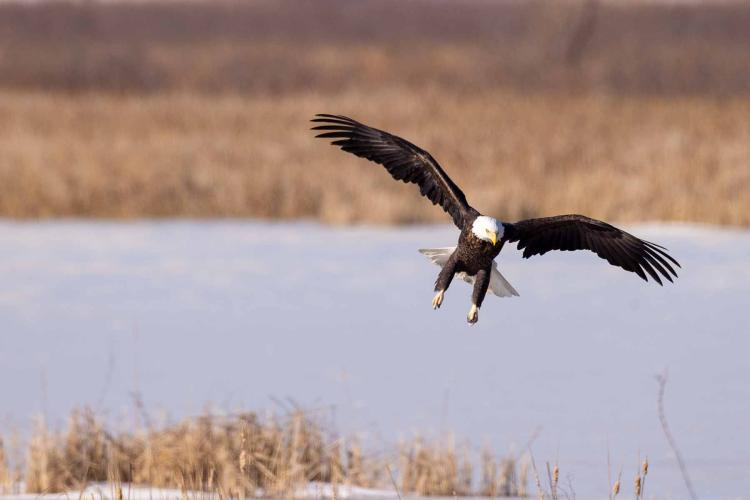 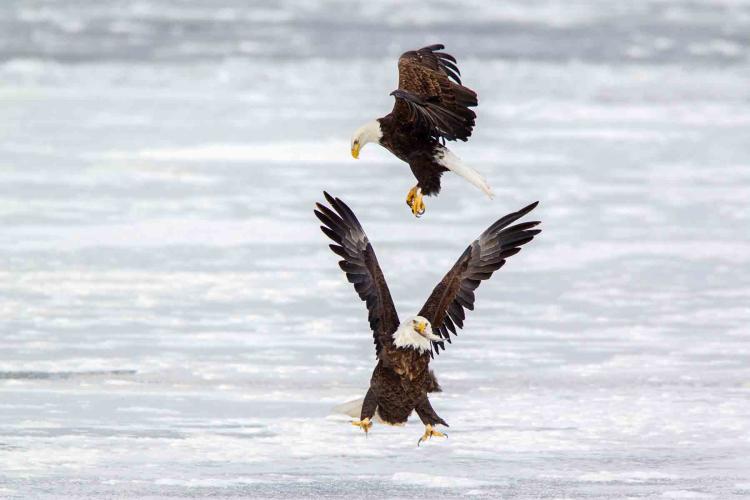 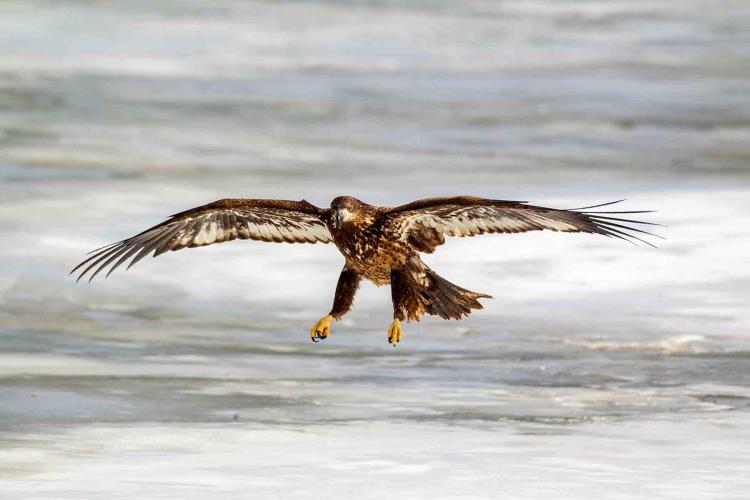 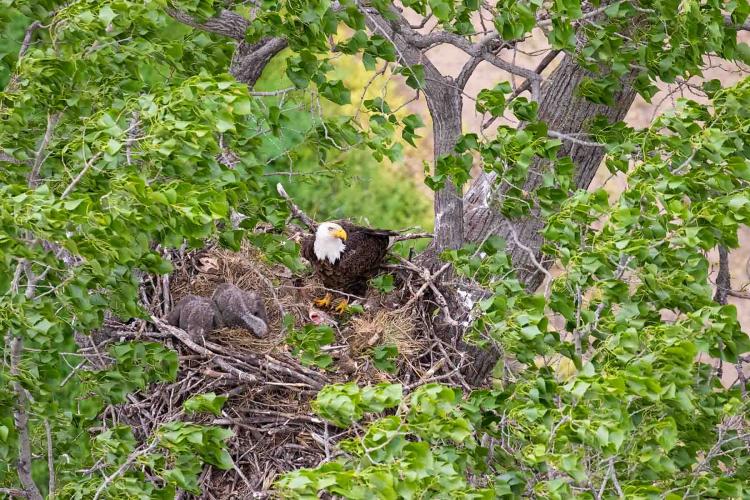 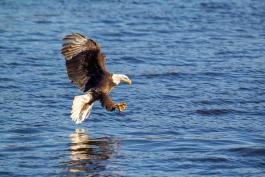 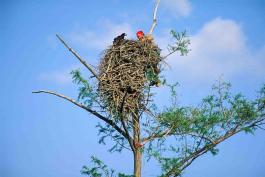 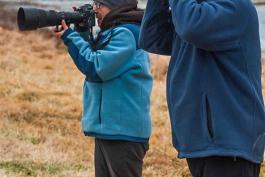 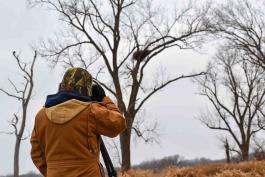 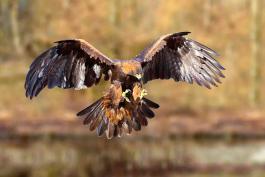 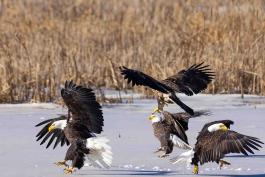 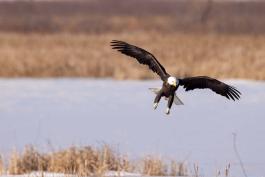 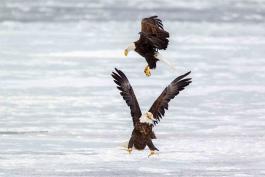 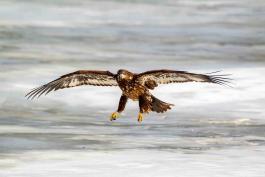 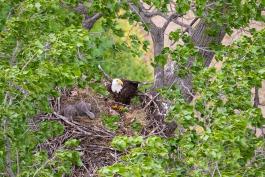 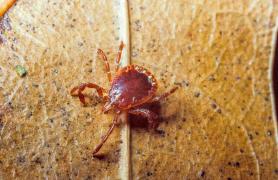 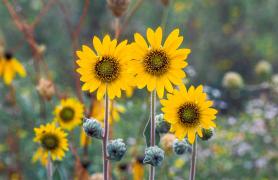