Given a secure place to hatch eggs, lead chicks to food, and find shelter from predators and winter winds, bobwhite quail will survive and even thrive. That’s good news for a new wave of quail and pheasant hunters. But to find those game birds, they must be willing to make long walks, cross a fence or two, and then walk some more in places with good grassland bird habitat. That means wading at times through brush, briars, and assorted waist-high wildflowers or grasses.

Like all hunting and fishing, there’s no guarantee you’ll find quail or shoulder your gun fast enough for an accurate shot. Quail flush with a startling burst of speed and loud wing flutter. Once up, they fly fast. Challenging wingshooting along with nature’s all-weather outdoor variables makes hunting quail an adventure.

Eating fried quail and a side of white gravy made from skillet drippings is also, like quail hunting, a longtime beloved Missouri tradition. One that continues despite recent downturns in bobwhite covey numbers due to habitat loss and environmental factors. But hunters and bird dogs willing to amble in good quail cover that’s near the ground-feeding bird’s food sources can find coveys.

“If you walk the appropriate habitat, a mix of native grasses and forbs, with some woody escape cover, you’re likely going to find the birds,” said Andrew White of Chillicothe, ardent quail hunter and a farm bill wildlife biologist for Quail Forever and Pheasants Forever in Missouri. “It might take you longer than years past to find them in that habitat, but it’s not impossible to find them.”

Places to hunt upland game birds are there for those willing to explore, and new hunters are finding opportunities to learn the skills and go afield. Sharenda Birts of Kansas City took some MDC classes for firearms safety and shooting skills. Then she went on a guided hunt for women. Now she’s enjoying hunting and mentoring youth and women who are interested in the sport.

“I like to walk the fields,” Birts said. “Even if I don’t harvest a bird, I feel like I’ve learned a little bit more about nature.”

Birts did not grow up in a family with a hunting and fishing background. But doctor’s orders for recovery from a bout with thyroid cancer prompted her to become more active outdoors. “The more I got outside, the more I enjoyed it.” Then she began to wonder, “how hard is it to get into hunting.”

Birts took some classes, including getting her certification through MDC’s hunter education program. Besides firearm safety, that course covers the basics of hunting. Her first success was harvesting a doe during a mentored deer hunt. She also connected with other women hunters through a group called WildHerness. A mentored hunt for pheasants started her love for upland bird hunting.

“I think one of my first loves of hunting is wingshooting, especially for pheasants,” Birts said.

Last November, she went on a quail hunting trip in northwest Missouri with White and other hunters, plus their trained bird dogs. Hunting dogs with their scenting ability freeze rigidly “on point” when they smell upland game birds, such as quail. When the quail flush, hunters shoot, and the dogs help find the downed birds and often retrieve them.

“I enjoy watching the dogs in action,” she said. “It’s amazing to see how they cooperate with their owners.”

Justin Skipper of Chillicothe had hunted small game, such as rabbits and doves. But with White’s help, he’s also added quail hunting to his autumns.

“I’m trying to venture out and do things I haven’t done in a long time,” Skipper said, as he watched bird dogs roving a field and scenting for quail.

The quail were not located during this hunt, but nighttime covey roosts were found with quail droppings in grass matted down in a circle. Large areas with varied native vegetation are good for quail but challenging for quail hunters. Yet to have quail, you need habitat. Walking in it is part of the fun.

“I enjoy being outside in nature,” Skipper said. “With the leaves off, you can see a lot more of the scenery and topography, plus hunting gets you out here moving.”

Habitat is key for quail hunting. Experienced quail hunters seek out good grassland bird habitat first, then they go hunting. Sometimes it’s in weedy patches next to crop fields, or it may be a large fallow field or one with restored native grasses, such as those in the Conservation Reserve Program (CRP).

Today, agriculture is more intensive and usable habitats for ground-dwelling grassland birds are drastically reduced and fragmented in some areas. That’s led to a statewide decline in quail and quail hunters. Rainy and cold weather patterns during nesting seasons have also depressed quail numbers. The 2020–2021 winter was harsh throughout the state and took a toll on quail. An annual roadside count of quail this summer by conservation agents found a dip in quail numbers throughout most of the state, said Beth Emmerich, MDC scientist and quail biologist.

However, MDC studies have proven that habitat management practices to benefit bobwhites in conjunction with agriculture can significantly boost quail covey counts. Some counts have found 10 times more quail on land managed to boost quail versus land with no practices such as cover strips, edge feathering, grazing, or prescribed burns. Not only are covey counts far higher in areas with good habitat management, Emmerich said, but quail populations bounce back far quicker from events such as harsh winters.

“I think the biggest habitat loss in Missouri is good brood rearing habitat,” Emmerich said. “They need more openings they can lead the young through, more open weedy cover, and a lot of bare ground.”

Successful hunters look for areas with the variety of vegetative cover and food that quail need. Many MDC conservation areas have tracts managed to support bobwhite quail. The habitat that White, Birts, and other hunters found last fall at the Bunch Hollow Conservation Area varied with old fields converted to native prairie grasses, shrubby draws, weedy gullies, and a hedge tree row bordering a crop field. They started the hunt by fanning out to walk a field with frost-killed wildflowers and grasses with mature seed heads. White watched his German wirehaired pointer, Chief, pushing through the grass, nose to ground.

“The quail may be out here feeding,” he said. “There’s lots of seed for them to eat. We found a few coveys in this spot last year.”

No coveys were found on this hunt, but that’s the challenge of quail hunting, especially now. In an era when quail are persisting best on land with large areas of favorable habitat for grassland birds, those large areas can be more challenging to hunt. Bobwhites are excellent runners as well as being fast flyers for short distances. Coveys in good habitat have more escape routes and places to hide. Hunters and dogs may need to crisscross fields and recheck key places to find them.

Another option is MDC’s Missouri Outdoor Recreational Access Program (MRAP), a partnership with private landowners. With help from federal funding, landowners receive payments in exchange for allowing the public access for outdoor activities. Quail hunters should check carefully for the allowed activities on a specific property to see if quail hunting is permitted. If allowed, it is helpful to scout for good habitat ahead of a hunt. Although, some quail hunters simply like to explore new places.

Quail hunters who politely seek permission to hunt on private land not enrolled in any program might gain access. But hunting on private land always should be by permission only, never by trespassing, which is illegal. Farmers who share access are treasured by quail hunters, especially if good wildlife habitat is near the crops and pastures. Respect for people, fences, gates, and unharvested crops builds bridges. Providing the host with field-dressed birds for a quail dinner is appreciated.

Richard Phillips has seen what good habitat can do for quail hunting. He lives in Blue Springs but shares a heritage family farm and two additional farm tracts in Carroll County with family and friends. In recent decades, they added plantings with quail-friendly shrubs, forbs, and grasses, as well as food plots. A 100-acre home place that once rarely had quail now has an abundance.

“We never had quail before, and now there’s eight coveys on that property,” Phillips said. He’s seen similar results on their other properties with habitat improvements. “There’s been a huge increase, it’s more than quadrupled the number of quail.”

Many farms in the Carroll and Caldwell county areas have been given a quail habitat assist by White, along with Lee Metcalf and Nate Mechlin, MDC private land specialists. It’s part of the statewide work by MDC staff to boost quail numbers. Metcalf has seen quail respond during two decades working with landowners and public and private conservation partners.

“It’s been 20 years, and the programs have gotten better and better at providing landowners cost sharing for quail habitat,” he said.

Hunters are responding in his community. Hunting dog crates are once again a common vehicle accessory during autumn. For quail hunters who haven’t walked the fields in a while, or newcomers wanting to join the ranks, the lesson is that quail can be found if enough good habitat is present, and if you are extra persistent in looking for them.

Birts is anxious to go on upland bird hunts she has planned this fall with friends, including women like her who are relative newcomers to the sport.

“My family enjoys seeing what I bring home because they’re involved in the cooking,” she said. “I harvest and clean, and they kind of took over cooking and preparing the wild game meals. I like being outdoors and they love being involved in a portion of my outdoor adventures.” 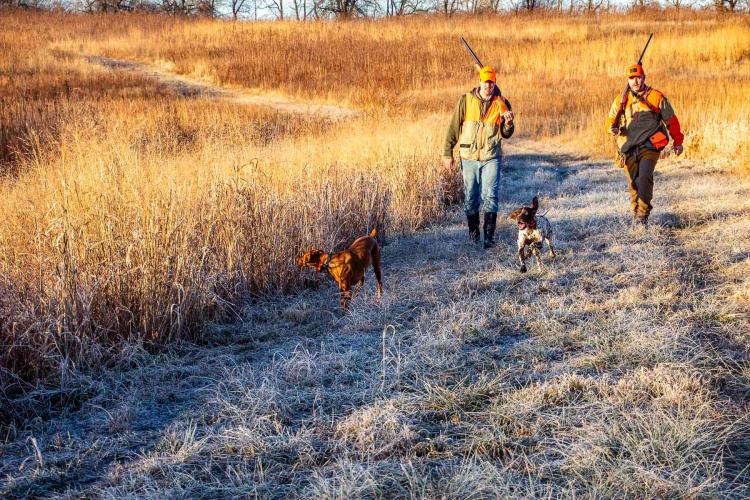 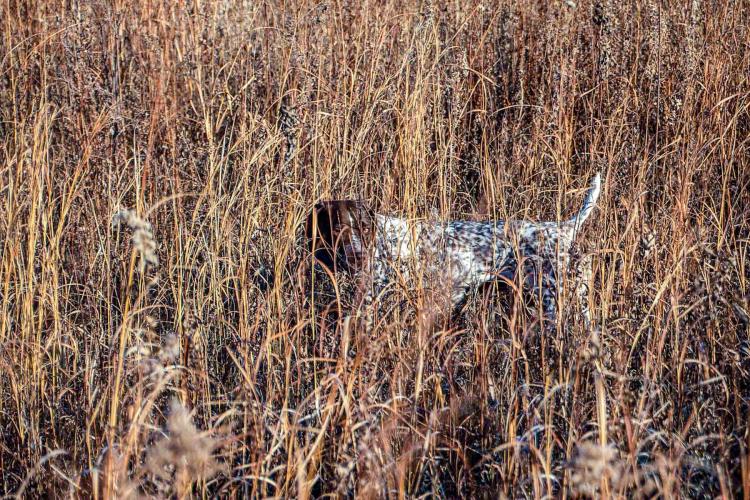 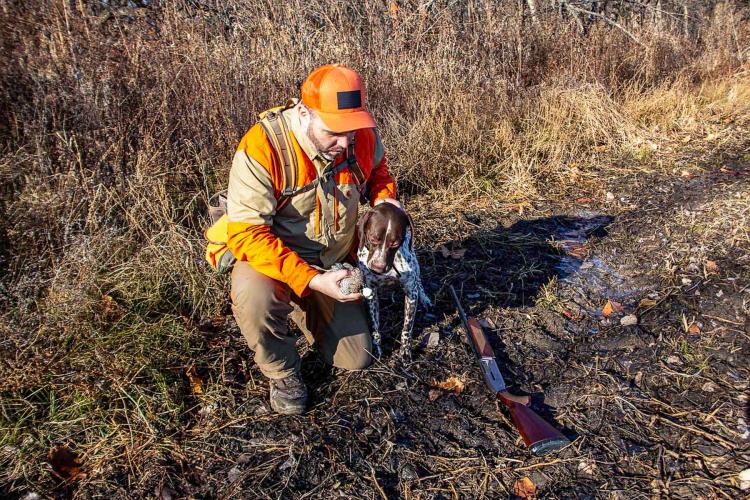 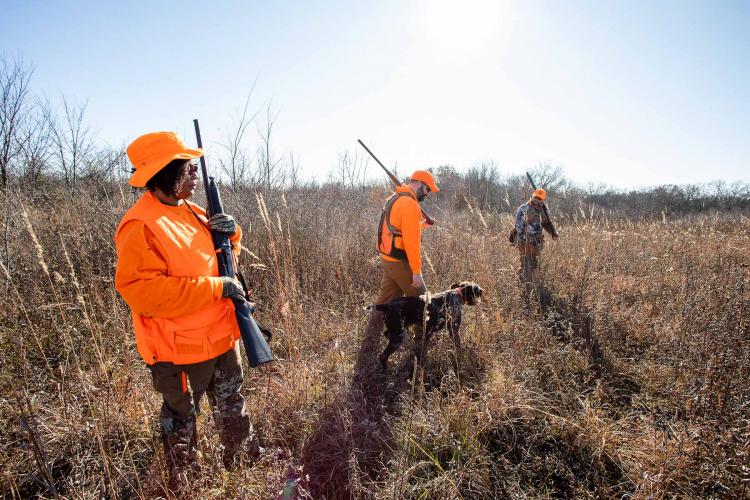 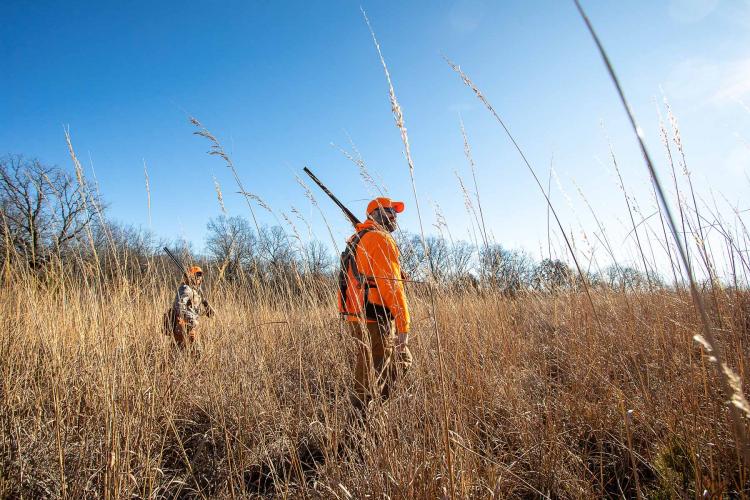 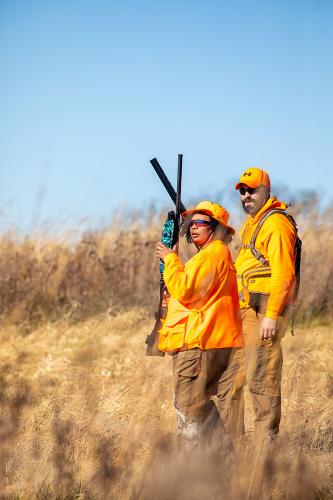 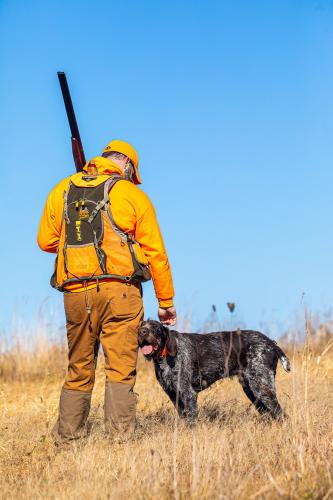 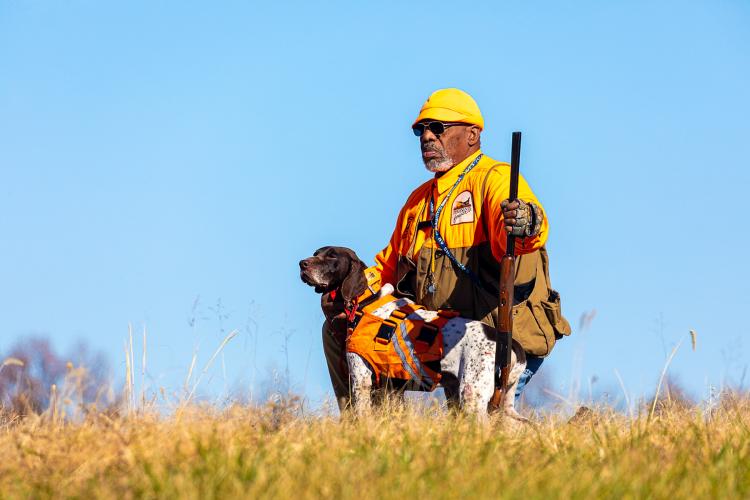 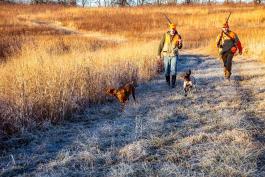 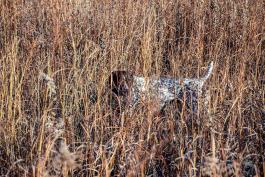 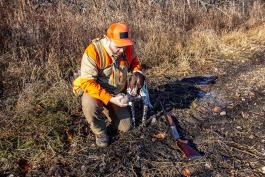 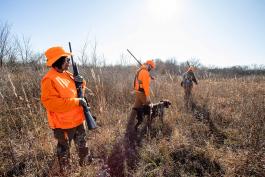 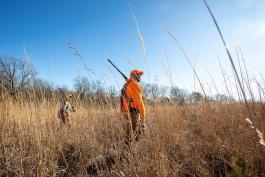 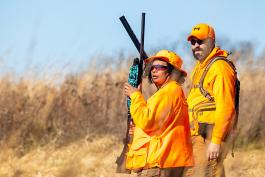 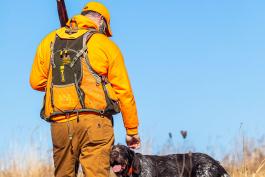 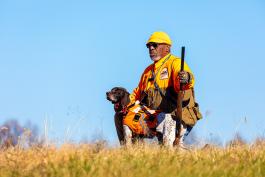 Media
Beyond Being There
Body

The culmination of a good nature photo takes patience, research, and getting a little dirty along the way.

Ask MDC
CWD Info to Know for the 2021–2022 Deer Season
Get Outside in November
In Brief
Inbox
Nature Lab
Places to Go: Rockwoods Reservation
Up Front With Sara Parker Pauley
We Are Conservation
Wild Guide: American Beaver