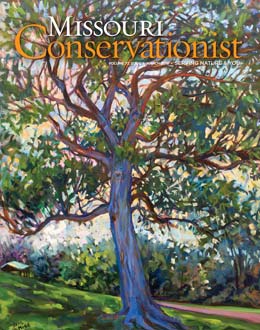 Robert Capa, A famous war photographer, once said, “If your photos aren’t good enough, then you’re not close enough.” As a wildlife photographer, I agree. When I’m asked what lens to use when photographing a wild animal, I often say, “Get closer to your subject.” There are exceptions, however, especially when photographing nesting birds, bears, and skunks. At these times, a long telephoto lens is a must.

It’s risky to photograph a skunk at close range, for obvious reasons. There are two types of skunks in Missouri — the striped skunk (Mephitis mephitis) and the eastern spotted skunk (Spilogale putorius). The striped skunk, a member of the weasel family, is a fairly large mammal, about the size of a house cat. It’s easily identified by two white stripes that run along its back.

Skunks are primarily nocturnal, sleeping in a den or burrow during the day and hunting at night. They like open woods, grassy fields, and are never far from water. Skunks are omnivorous, with a diet that includes insects, small mammals, fish, fruits, nuts, leaves, and grasses. They have long claws on their front feet to help dig for food.

With the exception of a few birds of prey, like the great horned owl, and an occasional red fox or coyote, skunks have very few natural predators. Since skunks don’t hibernate in winter, they begin mating from mid-February to mid-March. Skunks give birth to blind and deaf babies a few months later, usually in litters of five to six.

The striped skunk has two highly developed scent glands on each side of the anus that sprays a foul-smelling oil up to 12 feet. Contrary to popular belief, it’s their last line of defense. Before spraying, a skunk will first face its attacker, arch its tail, chatter its teeth, and stomp its feet. If the threat doesn’t go away, then it will turn around and spray. While driving on a county road in northwestern Missouri one cold evening, I spotted a striped skunk. Unfortunately, tall vegetation was obscuring it from view. The only way to get a good image was to get close.

A fellow photographer who was with me at the time thought I was crazy to even attempt to photograph a skunk this way. I crawled slowly until I was a few feet away. I could see it was feeding on a small rodent. To my surprise and relief, it didn’t feel threatened by my presence and didn’t retreat into a defensive position. It was too busy eating. After finishing its meal, it gave me one last glance and walked away slowly into the cover of grass.

Years of photographing wildlife have taught me how to stalk animals and read their body language. If you must get close to wildlife, move slowly, pay attention to their body language, and watch for warning signs, like a skunk’s raised tail.

Story and photograph by Noppadol Paothong

We help people discover nature through our online Field Guide. Visit on.mo.gov/1M3cWgI to learn more about Missouri’s plants and animals. 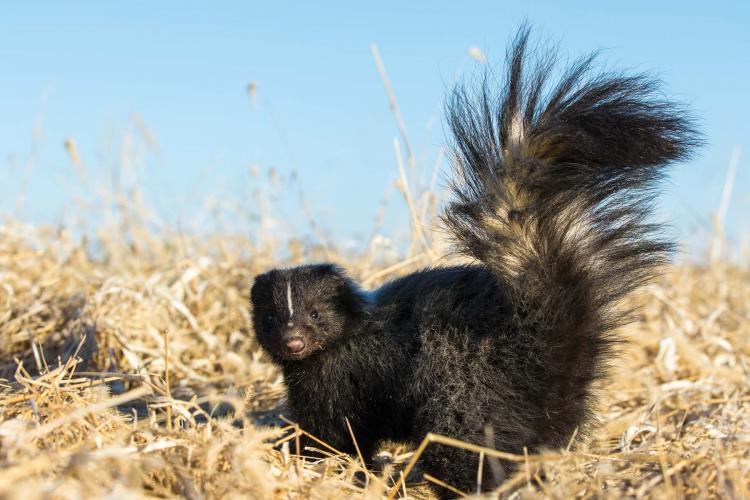 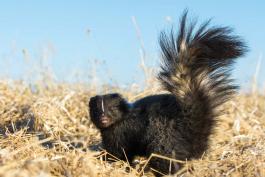