By |
From Missouri Conservationist: Jun 2003 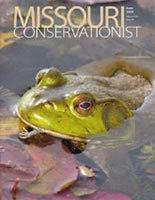 Early in my career, I had the privilege of working with conservation employees who began their careers in the 1940s. Their passion for conservation and their strong work ethic inspired me and keeps me working hard today.

When I was 23 years old, for example, and just starting my job with the Conservation Department's Protection Division, my first boss was Chet (Chester D.) Barnes. He was 63 years old then and had only two years to train me, but he made the most of that time. I not only learned a lot from him, but he served as my role model.

Chet began his conservation career in the early 1940s, shortly after the creation of the new Conservation Commission. He started as the manager of the Big Spring Refuge in Carter County, working for I. T. Bode, the first director of the Missouri Department of Conservation.

One of the first refuges created, Big Spring was used to grow turkey and white-tailed deer, both of which were rare in the state. Chet's primary responsibility was to protect and raise deer before trapping and relocating them to other locations in Missouri. It was hard work, and it required much traveling, irregular hours, and personal and family sacrifice, but Chet played a major role in the restoration of both deer and turkey in Missouri.

Chet's conservation career was interrupted in the 1940s by three years of service in the U.S. Army. He never spoke much about his military service except to say that he "visited" England, France, Holland and Germany. Like so many others of his generation, he served his country with distinction and asked for no credit or recognition when the war was over. That sense of service for a greater good carried over into his work in the field of conservation.

After the war, Chet resumed his job at Big Spring Refuge. In 1951, he became a conservation agent and worked until 1955 in Douglas and Wright counties. In 1956 he moved to Butler County and Wappapello Lake in southeast Missouri, where he was the conservation agent and district supervisor until he retired in 1979.

The Conservation Department employed far fewer conservation agents in those early years than it does today. Those pioneer agents worked alone and were scattered across the state. None of the areas Chet worked in had seen agents for quite some time, and, as Chet puts it, "People thought having an agent around was a new thing."

Both as a conservation agent and a person, Chet Barnes was firm and fair. People may remember receiving a ticket from him, but they likely still respected him for doing his job. Chet often said he didn't consider himself an enforcer of Missouri's wildlife regulations. He preferred to think of himself as a referee whose job it was to call the fouls.

Chet has always remained proud of his connection to conservation. He said he liked working alongside highly educated scientists and respected professionals. "It wasn't always perfect," he told me, "but on the whole, the Missouri Department of Conservation has done better than any similar agency in any other state."

He said he now takes satisfaction in the high recognition the Missouri Conservation Department has received nationally. "I'll never get the Department out of my system," he said. "Lois, my wife and fellow conservationist, and I were there near the beginning, and we are still big proponents of Missouri conservation 24 years after my official retirement."