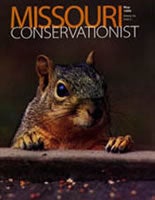 Copperheads, Agkistrodon contortrix, belong to a subfamily of venomous snakes, known as pit vipers, which also includes the cottonmouth and rattlesnakes. An important characteristic they share with other pit vipers are infrared-sensing facial pits, which are small openings between the eye and nostril on each side of the head. These pits assist in locating warm-blooded prey, such as mice.

Look into a pit viper's eyes and you'll see pupils shaped like cat's-vertical and elliptical. All venomous snakes in Missouri-including copperheads-are pit vipers. If you see a snake with round pupils, it is a nonvenomous species. Copperheads and other members of their family have hollow, folding fangs located on the forward part of their upper jaw that allow them to inject venom into their prey.

Copperheads and their relatives (members of the genus Agkistrodon) have a wide distribution, with species living in Asia, Malaysia, southeastern Europe, North America and Central and South America. In the U.S., copperheads range from southern New England to northern Florida and west to southern Indiana, western and southern Illinois, Missouri, southeastern Nebraska and southwest through much of Oklahoma and Texas.

There is not just one kind of copperhead; North America actually has five regional races or subspecies, which differ in coloration and geographic location. One western subspecies even ranges into extreme northern Mexico. Missouri is at a crossroads between several of these subspecies.

Those living in extreme southern Missouri have characteristics of the southern copperhead. The Osage copperhead lives throughout the rest of the state, except for a few counties bordering Iowa. There are blends or intergradations of these races in southern and eastern Missouri.

Missouri's copperheads are pinkish tan with distinct, dark brown markings along their backs that are shaped like a bow tie or hourglass (pinched in the middle and wide on either side). Southern copperheads have more tan than pink in the background color, and their markings have less brown and are more constricted on the top. Osage copperheads usually have a light tan or white border around each dark marking against their pinkish tan background.

Newborn copperheads and those under two years of age are slightly paler, but they still have the same markings. Young copperheads have sulphur yellow tails. This coloration is gone when they are 2 years old. Copperheads of all ages have a dark marking on the sides of the head bordered by a thin black line and a cream or white line. This marking and others along the back and sides help disrupt or break up the outline of their body and, along with their pinkish tan coloration, allow them to blend perfectly with the colors of dead leaves on the forest floor.

The name copperhead actually comes from the head color of the northern copperhead, which lives in southern New England, Pennsylvania, Ohio and into the Appalachian Mountain states. Northern copperheads have a slightly orange or copper-colored head, but this coloration seldom holds true for those living in Missouri. Most of Missouri's copperheads have a head color that's about the same pinkish tan as their body, but the copperhead name still stands. Their cream-colored belly has large, gray blotches along the edges that extend up slightly onto the sides.

Copperheads are considered medium-sized snakes and average 24 to 36 inches long. Adult male copperheads generally grow to longer lengths than females. Thus, a copperhead 36 or 39 inches long is likely a large male. Copperheads may reach a maximum length of over 43 inches.

The Osage copperhead lives in open forests along creeks, on rocky, southeast-, south- or southwest-facing hillsides and near abandoned farm buildings, abandoned saw mills and discarded woodpiles. Copperheads will live under lumber piles, discarded corrugated roof tin or other objects near abandoned farm buildings. The southern copperhead has a tendency to live close to creeks, rivers, river backwaters and swamps. Missouri has abundant natural and manmade habitats where copperheads can live and thrive.

Female copperheads can produce a litter ranging from one to a maximum of 20, with four to seven young being a common litter size, in late August through September. Research in Kansas showed that female copperheads may produce a litter of young for two years, then may go several years without reproducing. Newly born copperheads are 7 or 8 inches long. The young resemble adults, although their background color is lighter and their markings are a lighter brown.

Young copperheads have a characteristic that few people notice: The last inch or so of their tails are greenish yellow with 8 or 10 small, white markings edged in black. Their colorful tails have an important use: they help them capture prey. If a small lizard or frog ventures within a few feet of a coiled baby copperhead, the copperhead will move its tail near the center of its coil, elevate it slightly and begin to wiggle or undulate the tail. To a hungry lizard or frog that moving tail tip may look like a green caterpillar.

If the prey animal pursues the squirming "insect," the copperhead will grab it, inject a little venom and have a meal. Technically this is called caudal-luring-caudal meaning tail and luring meaning 'come over here please.' After about 18 months to two years, copperheads are able to capture larger prey and their tails become less colorful.

Over 90 percent of an adult copperhead's diet consists of mice, especially deer mice and voles. Copperheads also eat other rodents, such as house mice and young chipmunks. Snakes, including venomous species, have a role or job description as part of the checks-and-balance system of nature and should be valued as a primary, natural controller of destructive rodents.

Adult copperheads and other pit vipers are sit-and-wait predators: They locate a mouse trail, coil near it and wait until a mouse happens by. During the summer this may take place at twilight, during the night or in early morning. Copperheads may also ambush prey that enters the snake's hiding place, such as under a flat rock or piece of corrugated roof tin lying on the ground.

The copperhead's venom glands, venom ducts, fangs and venom evolved to allow them to kill mice and other prey animals. They bite a prey animal, inject venom, then quickly release the prey. The mouse or other prey dies in minutes and all the snake has to do is follow the odor trail and eat the freshly killed rodent. By using venom, the snake does not have to struggle with the prey and risk injury to itself. A copperhead's venom apparatus, however, also is used for protection.

Copperheads smell like cucumbers. You may have heard someone say you always know when a copperhead is around because it smells like cucumbers. This is both true and misleading.

Yes, copperheads and most other kinds of snakes give off an offensive odor when molested, cornered or captured. This defensive odor, produced by glands at the base of the tail, is given off at will and may also be mixed with feces. To some individuals this musk may smell somewhat like cucumbers.

However, a snake has to have a reason to expel its musk. Thus, a copperhead at rest under a rock or alongside a log will have no reason to give off its musky defense. You could walk within a few inches of the snake and never know it's there.

Black snakes breed with copperheads during floods and produce venomous black snakes. Not true. This myth has no biological basis and does not happen. Black rat snakes are not closely related to copperheads and have no interest in breeding with the venomous copperhead. Such a union would not produce viable offspring. Copperheads always move in pairs-if you see one you will find another. Not true. Copperheads are competing with each other for food and shelter. If they remain together, their chances of finding enough prey to eat is reduced. If copperheads are found together it is because the habitat is ideal and may sustain more than one snake, or the site may be an overwintering den. Baby copperheads are more dangerous than adults. Not true. There is no biological reason for baby copperheads to have more potent venom than adults. They have smaller venom glands, tiny fangs and are not capable of producing a venom more potent than adult copperheads.

In Missouri, no person has died as a result of a copperhead bite. In an average year, venomous snakes bite approximately 200 people in this state, with the majority involving copperheads. In over 25 years there are no records of a person dying from the bite of any venomous snake species native to Missouri. A person bitten by a copperhead should be taken to the emergency room of the nearest hospital to prevent infection and reduce pain, not because he or she is going to die.

The bite of a copperhead usually produces immediate, intense, burning pain. This may be followed by tingling or throbbing and nausea. In a few minutes there may be signs of swelling on the arm or leg. The most important thing is to immediately take the victim to a hospital emergency room. Various first-aid measures, such as applying a tourniquet or cutting and sucking out the venom or applying ice packs, are not recommended for copperhead bites.

In addition, according to emergency-room physicians, copperhead bites are seldom treated with antivenom, the medication that counteracts the affects of snake venom. This medication can cause a serious allergic reaction that can cause human death.

The majority of venomous snake bites can be prevented simply by not trying to capture or handle copperheads or other venomous snakes. Copperheads, by nature, are not aggressive. They do not go after people, do not search for people to bite and would rather stay motionless and undetected or try to avoid an intruder.

Are you sure it's a copperhead?

Too often, any snake with brown or red markings is thought to be a copperhead and is killed. There are five common harmless Missouri species often confused with and misidentified as copperheads:

Hatchling black rat snakes (top image) are found throughout Missouri. During late summer and early fall, young black rat snakes average 10 inches in length and are sometimes spotted in backyards, garages or basements. They have a narrow head and gray background color with black markings. Copperheads have a wide head and are pinkish-tan with brown, hourglass-shaped markings.

Adult prairie kingsnakes average 3 to 4 feet in length and have a narrow head. Their coloration is nothing like the copperhead, which has a stockier body and is pinkish-tan with brown markings in the shape of an hourglass or butterfly (pinched on top and wide on either side).

Eastern hognose snakes are found throughout Missouri. This species may have a wider head and a stockier body than most non-venomous snakes. Although their coloration is extremely variable, a hognose snake never has a pinkish-tan color with markings in the shape of an hourglass or butterfly. When threatened, hognose snakes can make a loud hissing noise; copperheads are not able to make extended hissing sounds.

The bullsnake was once common in our former tallgrass prairie counties and is Missouri's largest species of snake, reaching nearly 8 feet in length. Bullsnakes have narrower heads than copperheads, and their mixed colors of cream, yellow, tan, brown and black suits them for a life in prairie grasses. Copperheads, on the other hand, are pinkish-tan in color with brown markings in an hourglass or butterfly shape. When threatened, bullsnakes also can make a very loud hissing sound, which copperheads are incapable of making.

The red milk snake (bottom image) is Missouri's smallest kingsnake (21 to 28 inches in total length) and lives on rocky, open hillsides. It has prominent red markings.