The Lizards of Missouri 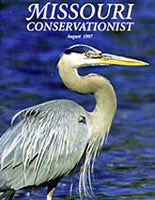 Missouri is home to 13 kinds of lizards. All lizards native to the Show-Me-State are harmless and non-venomous. Like other reptiles, lizards are ecdothermic or "cold-blooded." They are closely related to snakes, and some even look and "act" just like snakes.

Most Missouri lizards are long, slender reptiles with scales, a long tail and four legs with claws on their toes. They are different from snakes because they have legs, ear openings and eyelids. However, as with other animals, there are exceptions: The western slender glass lizard, which lives in many Missouri counties, is legless, but has eyelids and ear openings, which snakes lack.

Our lizards live in three types of habitats: forests, glades and prairies. Those living in forests use clearings, where they bask in the sun on fallen logs. Glade species bask in the sun on rocks, as well as take shelter under them at night. Prairie lizards have no problem finding places to bask, but they take shelter in animal burrows or under dead grass.

Missouri's lizards all have scales and a tough outer skin. Just like snakes, lizards must shed their skin so they can grow. A lizard's outer skin normally comes off in large pieces three or four times during the summer.

What Lizards Eat and What Eats Lizards

All of our lizards eat insects (grasshoppers, ants, crickets and beetles) and spiders. They are valuable as a natural control of destructive species, such as termites. Skinks and fence lizards are known to eat the winged life stage of termites (called "alates") as they emerge from underground in mid-spring. And, the eastern collared lizard is an important predator of other lizards!

Kingsnakes and racers will eat lizards at every opportunity. The roadrunner, a bird that lives on glades in southwest Missouri, is a primary lizard eater. Hawks are important lizard predators. Skunks and badgers dig up lizard eggs. Unfortunately, house cats have proven to be a primary predator of all species of lizards.

Lizards use their tongue to pick up odors in their environment. They use their small, strong teeth to grab and crush insects. If you capture a large skink or a fence lizard, its bite will feel like nothing more than a pinch. However, collared lizards have a larger head and strong jaws and can cause a superficial bite that may bleed slightly.

The Tail Saves the Day

A lizard can release a part or all of its tail when it is grabbed by a predator. Once the tail is broken off, the lizard quickly runs for shelter and is safe for the moment, leaving a squirming tail to confuse or distract the predator. A lizard's tail has special muscles that constrict at a break point and prevent any blood loss.

After a lizard has lost its tail, a "new" one will eventually grow back, but it will not be as colorful or elegant as the original. It may take three or four months to grow the replacement.

All Missouri lizards lay eggs. Most female lizards will lay their eggs in a burrow in loose soil, under a flat rock or in rotten logs and leave them.

Skinks (common, shiny-looking lizards) and glass lizards are different. They lay their eggs under a flat rock or inside a rotten log and stay with the eggs until they hatch. They guard their eggs from being eaten by other lizards.

The size of lizard eggs depends on the species. For example, our smallest lizard, the ground skink, lays from two to seven eggs that average under a half-inch long.

Newly hatched lizards are small and are on their own, with no help or protection from the female. Ground skink hatchlings are only 2 inches long - small enough to curl up on a dime with room to spare.

Missouri's lizards are not recommended as pets. They have special needs, including warm temperatures (82 to 95 degrees F) and natural ultra-violet light. Pet lizards need to bask under a warm lamp so they can elevate their body temperature to over 95 degrees F.

Captive lizards also need live, natural food (crickets, grasshoppers, spiders), which is difficult to find in winter. The Conservation Department recommends Missourians observe our lizards in the wild and not take them home as pets.

Missouri's 13 kinds of lizards require specific natural habitats and protection from unnatural predators. Many people enjoy having lizards around their homes and enjoy watching them. Landowners who are interested in helping lizards can do the following:

For more information on lizards, as well as other Missouri reptiles or amphibians, consult the Missouri Department of Conservation's book, Amphibians and Reptiles of Missouri, which can be purchased at a regional office, metro office or nature center.

MYTH: A glass lizard that has lost its tail will come back, find its tail and put itself back together again.

No, this is biologically impossible.

MYTH: The tail of a skink is "poisonous" and can sting you.

No, their tail is not a stinger and is not venomous.

MYTH:"Mountain boomers" (eastern collared lizard) produce a call that sounds like a frog.

No, all of Missouri's lizards are voiceless.

MYTH: If a lizard bites you, it will hold on until it thunders.

No, they have no interest in holding on that long.