By |
From Missouri Conservationist: Sep 1995 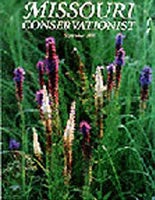 It is late summer and I am listening to a chorus of voices. Tree frogs, crickets and katydids predominate, but there is the occasional buzz of a fly and the raucous cry of a distant crow. The voices are varied, but together they create a harmony that's as musical to my ears as any of the great composers.

In my hands I have a chorus of voices, too. I am holding the results of a survey of 10,000 Conservationist readers. Like nature's chorus, they are varied yet harmonious. This is the largest survey ever conducted by the Conservation Department, yet the voices express in concert their concern for Missouri resources.

We use surveys like this to tell us how we're doing. Are we giving you the kind of magazine you want? What do you like best? Least? What changes would you like to see, if any?

Some of the voices compete. "More hunting stories." "Too many hunting articles." "Stay away fr om politics and controversy."

"Tell us more about conservation issues and how we can solve them." But most all comments were complimentary and unanimous in support for conservation of the state's fish, forests and wildlife.

A prime motivator for the survey was to gauge support for a children's magazine. More than 75 percent of readers surveyed said they favored a special magazine for kids. In response, this issue contains the third in what we hope will become a quarterly edition of "Outside In," a magazine designed with kids in mind.

Subjects for kids were rated by our readers in the following order of preference: animals, fish and fishing, how-to projects, birds, kids in conservation, kids and streams, games, kids and trees, amphibians and reptiles, hunter education, endangered species, hunting, insects, and kid's art and writing.

The top ten article subjects rated by adults (71 percent of respondents were men, 28 percent were women) were, in order of preference: wildlife, rivers and streams , places to go, fish and fishing, birds, lakes and ponds, how-to articles, humor, endangered species and conservation education.

Subjects that cross the gender gap include articles on wildlife, rivers and streams, places to go, birds, how-to articles and humor. Men and women parted company on others, however. Men highly rated articles on fish and fishing, lakes and ponds, hunting and outdoor ethics, while women wanted more articles on endangered species, plants, nature centers and tree care.

Special issues (like August's Big Rivers issue) are a way to focus attention on a topic of importance. We asked readers to rank topics for special issues. Their choices, in order of preference, were: conservation lands, big rivers, fishing and hunting. Asked to write in suggestions for other special issues, readers nominated birds, camping, wildflowers, attracting wildlife, hiking, mushrooms, trees and a host of other favorite subjects and pastimes.

Next March, the Conservationist will include articles on att racting wildlife to lands large and small. Then in May, the entire Conservationist will be devoted to Conservation Department lands and the spectacular recreational opportunities they offer. Other special issues in the works are "conservation for communities" (March, 1997), hunting (September, 1997) and fishing (March, 1998). Yes, we plan issues that far in advance!

Comments from our readers comprised over 300 pages. They are heartening and helpful, and we take them very seriously. Look for selected comments on the "Reflections" page of upcoming issues.

Thank you to all our readers who took time to fill out the survey forms. If you were not one of the readers surveyed, we're still interested in your opinions about the Conservationist. Send them to "Reflections," Missouri Department of Conservation, P O Box 180, Jefferson City, 65102-0180. Within the space, time and budget constraints in which we operate, we will continue striving to give you a magazine that, as one reader put it, "Makes me proud to be a Missourian."