The ruddy duck is small diving duck with a long, stiff tail that is often cocked up. The male has a dark cinnamon body, a black head with a white cheek patch, and a blue bill. The female is brownish with a dark line through the dingy white cheek. Both male and female are duller in winter, and the bill of the male becomes dark gray. Generally silent except during courtship. Voice is a rapid, sputtering, chuck-chuck-chuck-chuck, chuck, churrrr.

Similar species: Male ruddy ducks in breeding plumage are unlikely to be confused with anything else. Females and winter males are less distinctive in terms of color, but their compact, small size; diving habit; wide, up-curved bill; and long, stiff, often cocked-up tail are strong clues. 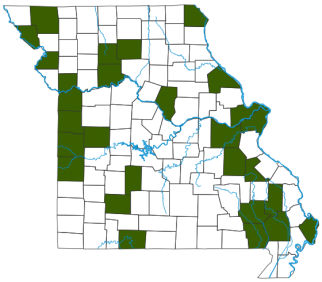 Statewide. In winter, more common in southern Missouri than in the north.

This species is found in shallow and deep water. It dives beneath the surface to forage and to retreat from danger. Ruddy ducks nest in dense vegetation in summer but spend the nonbreeding season on open water. Ruddy ducks act like grebes in that they submerge themselves and quietly slip away. Their legs are placed very far back on the body, so they are helpless on land. The stiff tail is used as a rudder when swimming and, cocked up, in courtship displays.

Ruddy ducks strain aquatic invertebrates and some plant materials from muddy sediments, usually diving underwater to forage on the bottom. Much of the diet comprises midge larvae and other wormlike and small invertebrates. As with many other birds, the percentage of animal foods increases during breeding season, when more protein is needed, and the percentage of plant foods increases during migration and winter.

Common migrant; rare summer (nonbreeding) visitor; hypothetical summer breeder. As a winter resident, uncommon in southern Missouri and rare in northern Missouri. The South American population is considered by some to be a separate species, the Andean duck, Oxyura ferruginea. Ruddy ducks introduced to England in the 1940s and 1950s escaped and became invasive, spreading to continental Europe and threatening the endangered white-headed duck native to the region; conservationists there are attempting to extirpate the species in Europe.

Present in Missouri during migration: numbers peak between mid-February to mid-May, and again between late October to mid-December. Ruddy ducks breed in both North and South America, from the prairie provinces of Canada to Texas, including Rocky Mountain lakes and marshes and a few states in the east, but they are not known to breed in Missouri. Shallow nests are built from a variety of plant materials and are placed a few inches above water level amid cattails and other emergent aquatic vegetation. A woven roof of vegetation covers the nest from above. Clutches comprise 3–13 eggs, which are incubated 20–26 days. The eggs of ruddy ducks are the largest of all ducks, as a percentage of the adult size, and the ducklings are especially well developed upon hatching. They can leave the nest, swim, and dive within a day of hatching and require little parental care. There can be 1 or 2 broods. A ruddy duck can live to be at least 13 years old.

To keep ruddy duck populations healthy, people must protect the prairie pothole region’s wetlands, where this and so many other waterfowl breed. The loss and degradation of wetland habitat, invasive species, oil spills, overgrazing, and pollution, are human-caused phenomena that we are responsible for ameliorating.

Although many ducks lay their eggs in the nests of other birds, the ruddy duck is well-known for parasitizing other ducks, especially redheads and canvasbacks, in addition to building its own nest. Grebes and coots attack ruddy ducks during breeding season, and ruddy ducks are themselves aggressive — to each other and to other ducks — at nesting time. 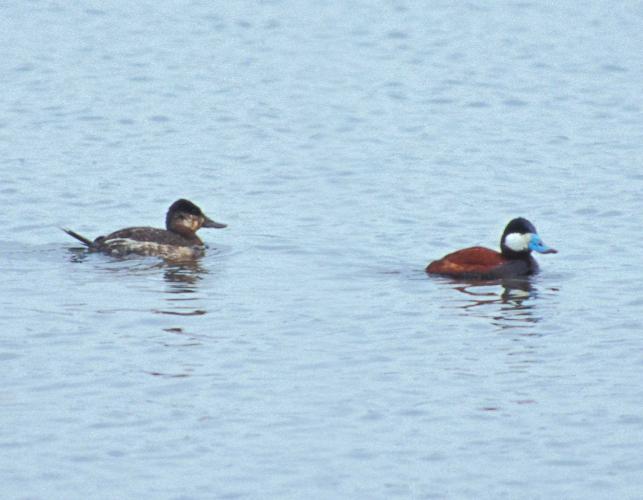 Caption
In Missouri, the ruddy duck is a common migrant; a rare summer (nonbreeding) visitor; and a hypothetical summer breeder. As a winter resident, it is uncommon in southern Missouri and rare in northern Missouri.
Right to Use
1/7
Image 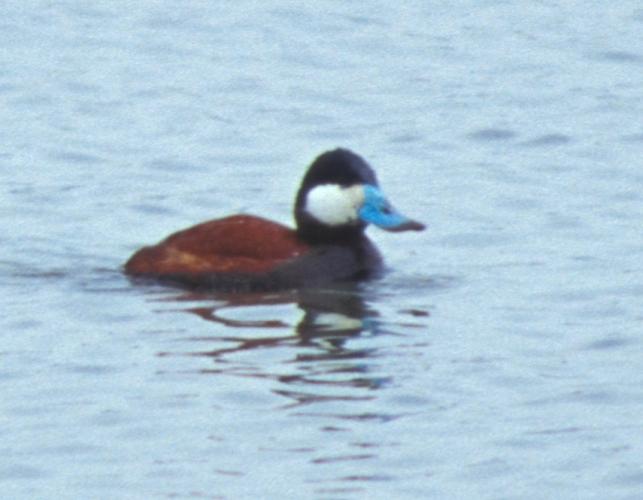 Caption
The ruddy duck is small, compact diving duck with a long, stiff tail that is often cocked up. Breeding males are conspicuous with their dark cinnamon body, bright white cheek patch, black head, and blue bill.
Right to Use
2/7
Image 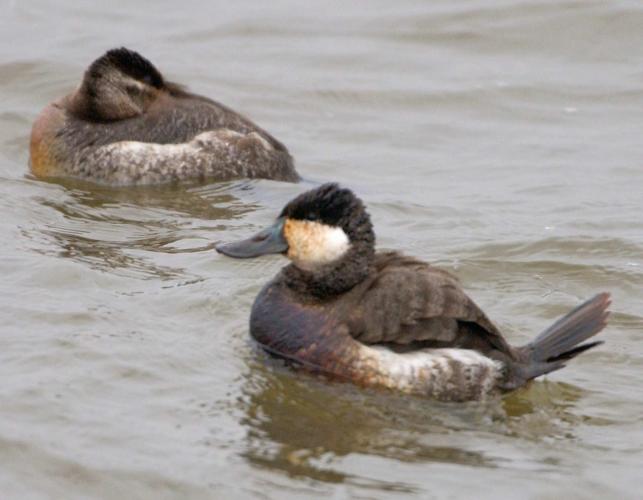 Caption
Ruddy ducks are found in shallow and deep water. They dive beneath the surface to forage and to retreat from danger.
Right to Use
3/7
Image 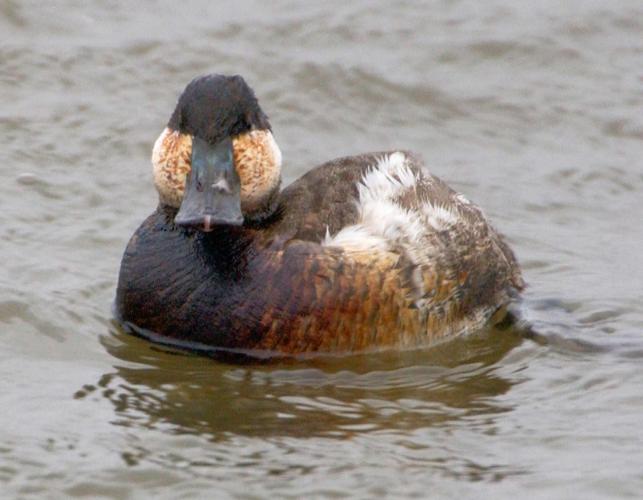 Caption
Ruddy ducks are duller in winter, and the bill of the male becomes dark gray.
Right to Use
4/7
Image 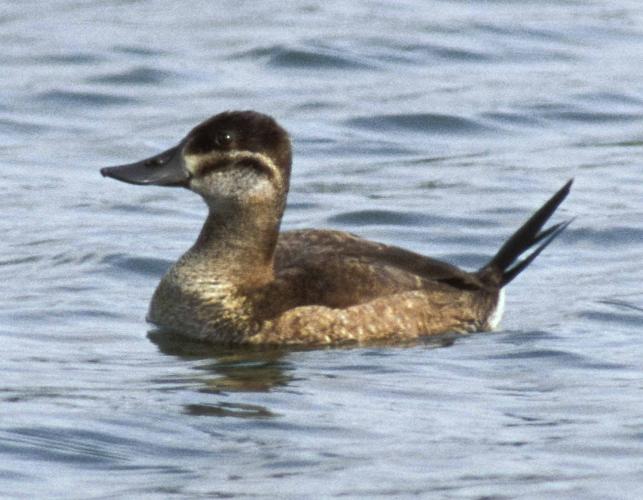 Caption
The female ruddy duck is brownish with a dark line through the dingy white cheek. Note the long, cocked-up tail distinctive of this species.
Credit
Jim Rathert
Right to Use
5/7
Image 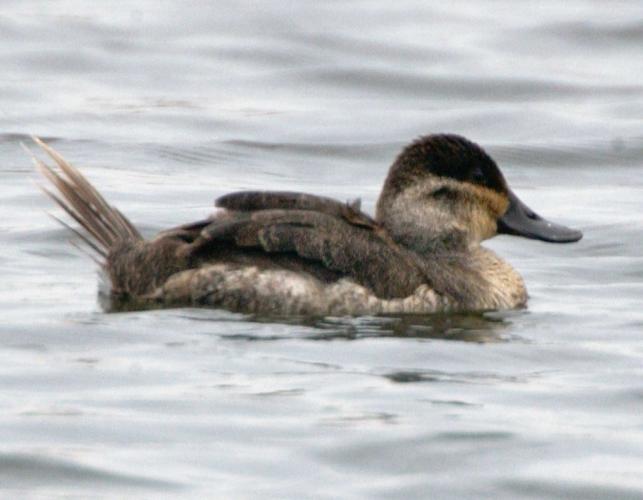 Caption
Ruddy ducks strain aquatic invertebrates and some plant materials from muddy sediments, usually diving underwater to forage on the bottom.
Right to Use
6/7
Image 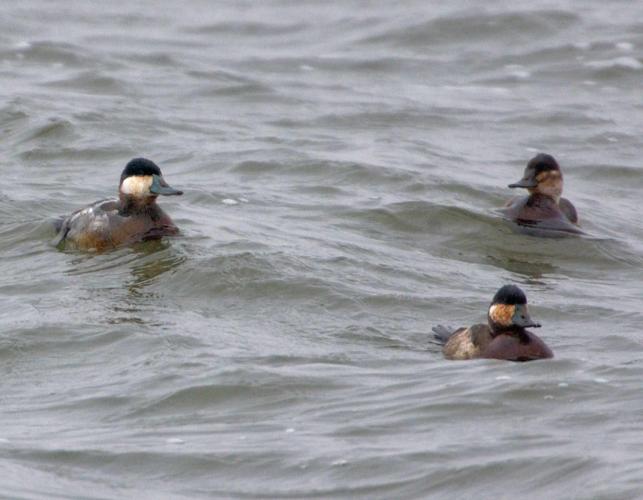 Caption
Whether in breeding or winter plumage, the male ruddy duck's white cheeks contrast strongly against the dark cap. Females have a blurry brown line across the cheek.
Right to Use
7/7
Image 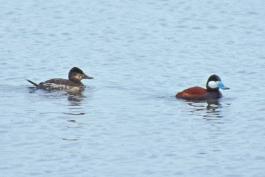 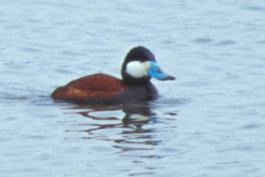 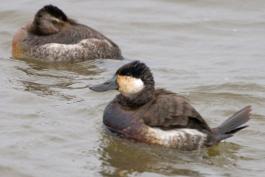 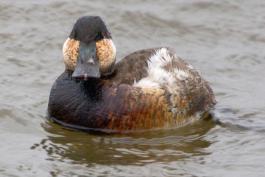 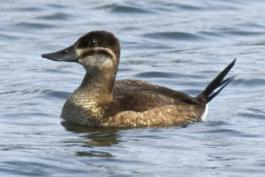 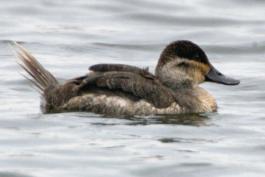 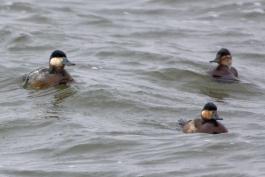 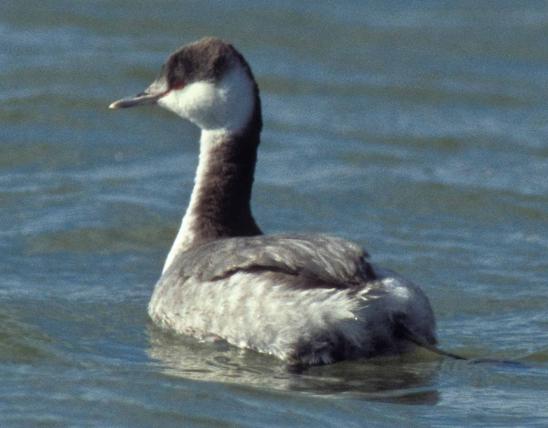 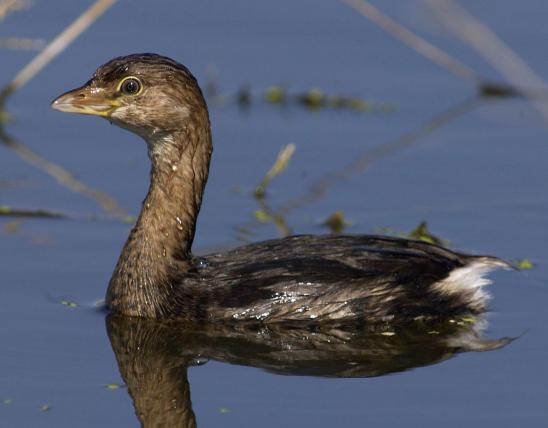 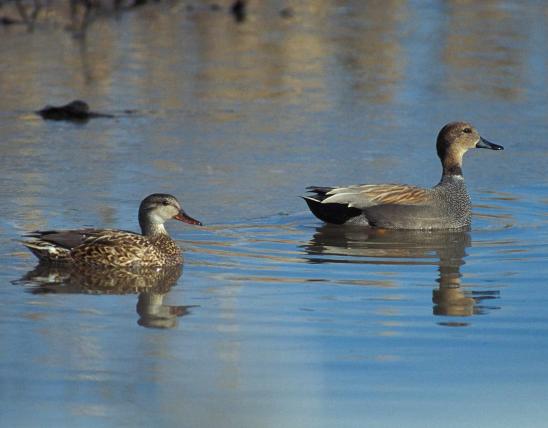 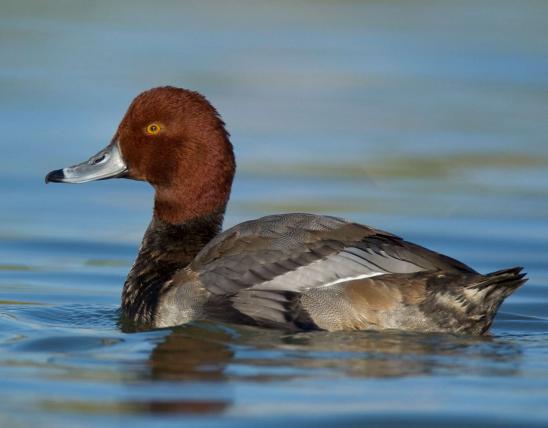 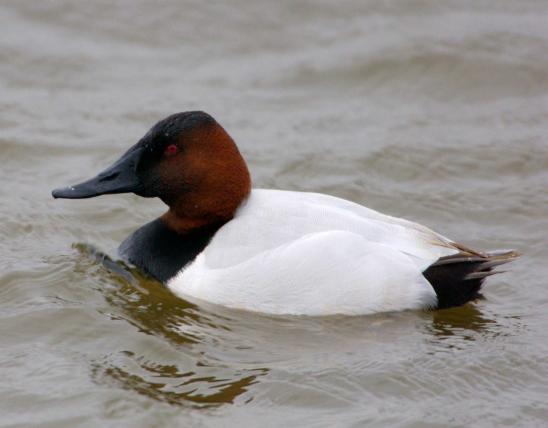 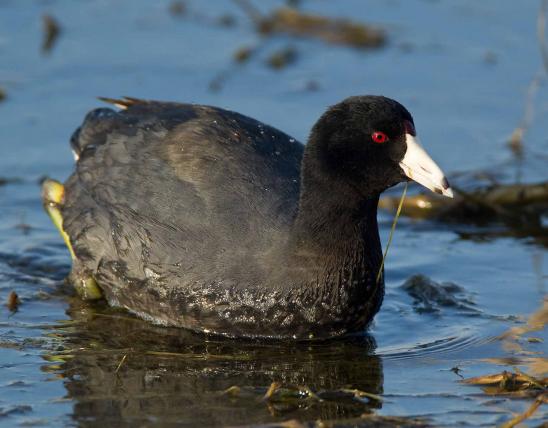 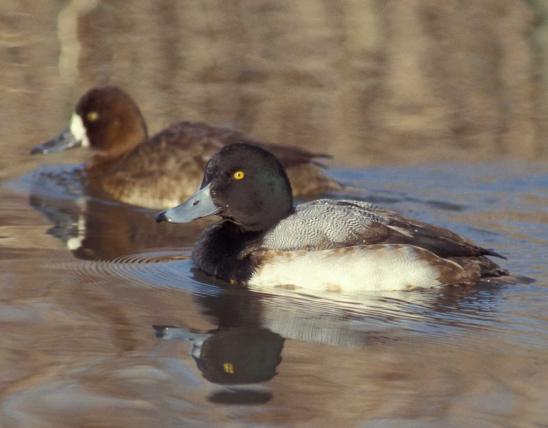 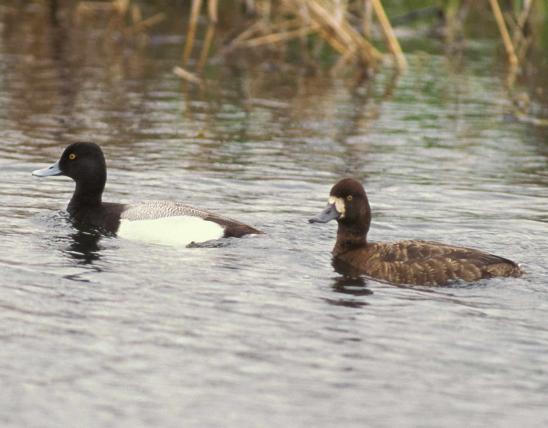 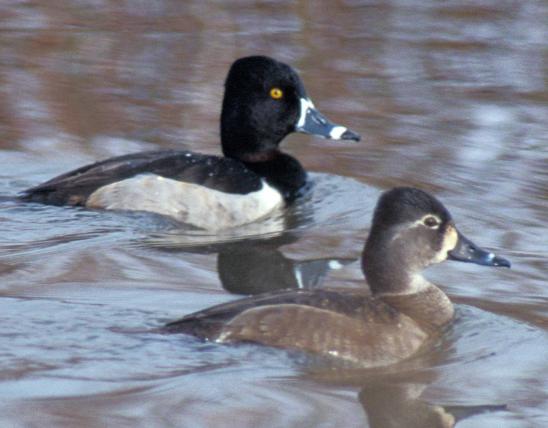 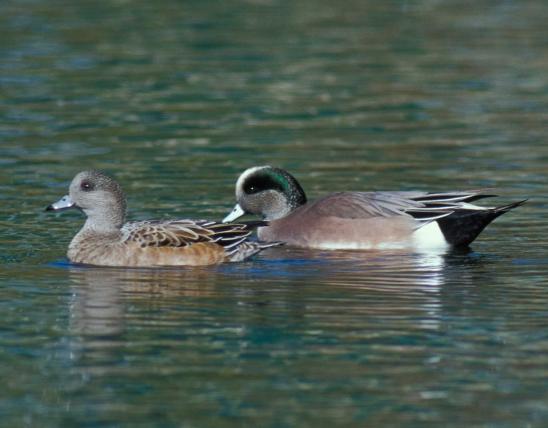 American Wigeon
About Birds in Missouri
About 350 species of birds are likely to be seen in Missouri, though nearly 400 have been recorded within our borders. Most people know a bird when they see one — it has feathers, wings, and a bill. Birds are warm-blooded, and most species can fly. Many migrate hundreds or thousands of miles. Birds lay hard-shelled eggs (often in a nest), and the parents care for the young. Many communicate with songs and calls.
Related Content
Bats