Golden currant is an erect to arching, spineless shrub up to 6 feet high. It bears edible fruit. It is uncommon in the western part of the Ozarks. The flowers have a strong fragrance reminiscent of spicy cloves or sweet carnations.

Leaves are simple, alternate, 1¼–3¼ inches long or wide, circular in overall shape, 3- or 5-lobed, the lobes entire or toothed toward the tip, usually entire toward the base, the margin often fringed with hairs, green on both sides, smooth, hairy on the veins above and below; leaf stalk ¼ to 1 inch long.

Bark is reddish brown to gray, often splits, with the thin sheets curling along the trunk; the pores are prominent; the wood is white, soft.

Twigs are flexible, reddish brown, hairy; the spurs on the stem bearing fruit; older twigs are grayish brown. There are no spines.

Similar species: Not counting cultivated currants and gooseberries, Missouri has 4 species in genus Ribes (pronounced RYE-beez) that may be encountered in natural habitats. Only American black current could be confused with golden currant:

Uncommon in the western portion of the Ozarks. Cultivated statewide for its edible fruits.

Occurs on exposed, high rocky limestone or dolomite bluffs often on narrow ledges of nearly sheer rock faces along the White River drainage and locally along the Jacks Fork River. Also along roadsides and railroads.

Golden currant is not abundant in any place where it grows in Missouri. It once was classified as rare, but recent surveys have found enough populations to drop it from the listing.

In the wild, uncommon, mostly in the western portion of the Ozarks.

This shrub is commonly used as an ornamental, for its fragrant flowers, attractive foliage and shrubby growth, and tasty fruit. It is a top pick as a native shrub bearing edible fruit.

In the Great Plains region to our west, where it is more abundant, the sweet, flavorful berries are a favorite wild edible.

Golden currant was eaten by the people of many Native American tribes and by early settlers, as it is today. The fruit is full of seeds, but it makes good jams and jellies and is sometimes used in pies.

As with gooseberries, preparing wild currants takes some doing: When you’re picking them, part of the stem usually pulls off with the berry; plus, a little dried “point” usually remains on the other end of the berry (it’s what’s left of the flower). Both the stems and the flower remnants must be plucked off of each berry before it can be used. The fact that people gladly do this labor attests to how much they enjoy the flavor of these berries. However, if your recipe involves cooking the berries, you may strain the cooked berries through a sieve or food mill to remove the stems, seeds, and other bits, creating a smooth, jamlike purée that can be mixed with sugar.

The species name, odoratum, refers to the fragrant flowers. The common name “clove currant” refers to the aromatic, clove-like smell of the flowers.

The fruit is eaten by several bird species and by squirrels and chipmunks. Birds that eat berries, no doubt including golden current, include catbirds, thrashers, robins, and waxwings. Foxes, skunks, squirrels, and mice also eat a wide range of fruits and ultimately disperse the seeds away from the parent plant.

Many types of bees, flies, butterflies (notably the brown elfin), moths (notably hummingbird and clearwing moths), and wasps visit the flowers of Ribes species for nectar, pollen, or both. Spring-flowering shrubs are an important nectar source for insects that are active in early spring.

Gray comma butterfly caterpillars eat the leaves of gooseberries, and golden currant might also be a host plant for them. The early stage caterpillars feed on the undersides of the leaves, so it’s harder to see them.

Many species of gooseberries and currants have been the subject of an aggressive eradication campaign in parts of the country where white pine grows and is harvested for lumber. The shrubs are an alternate host of the white pine blister rust, which was unintentionally brought in from Europe around 1900. This fungus attacks and kills white pine, which is an important timber tree in eastern North America. Like many other rusts, it needs two hosts to complete its life cycle; its alternate host is various species of Ribes. Since Missouri is not in the range of white pine, other than as ornamental plantings, the blister rust has not been considered a threat here. Elsewhere, however, state laws may forbid the cultivation of gooseberries and currants. 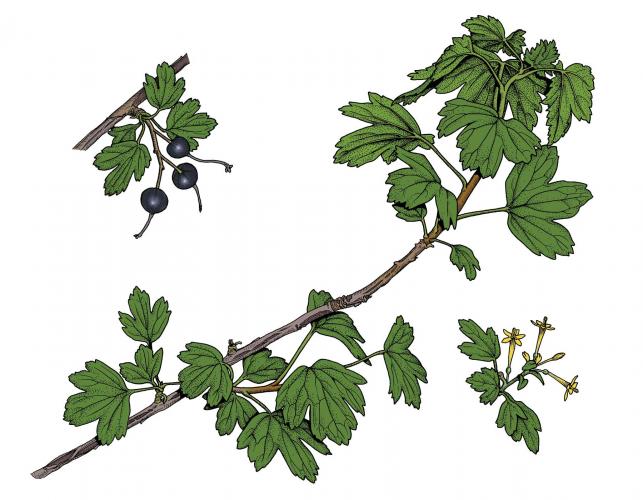 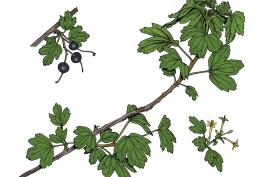 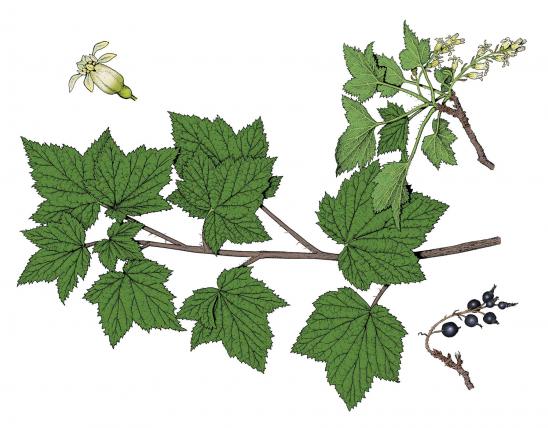 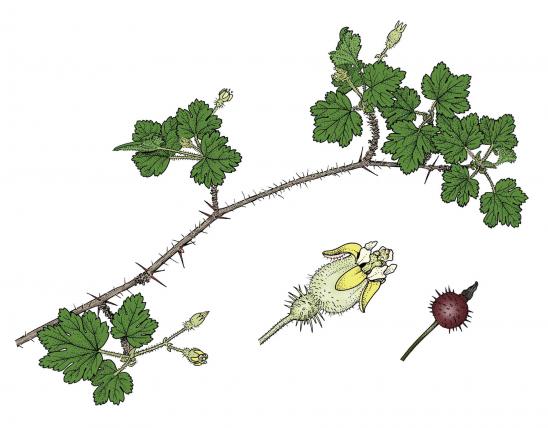 Prickly Gooseberry
About Trees, Shrubs and Woody Vines in Missouri
There are no sharp dividing lines between trees, shrubs, and woody vines, or even between woody and nonwoody plants. “Wood” is a type of tissue made of cellulose and lignin that many plants develop as they mature — whether they are “woody” or not. Trees are woody plants over 13 feet tall with a single trunk. Shrubs are less than 13 feet tall, with multiple stems. Vines require support or else sprawl over the ground.