The coldwater crayfish is a medium-small, stout crayfish with a blue-green head and pincers and a dark rust-brown carapace. The abdomen has a pair of conspicuous white lateral spots on the first segment, and a tapering V-shaped dark central stripe. This crayfish is distinguished from other crayfish within its range by the distinctive red and green color and V-shaped central stripe on the abdomen.

Except for the different streams and ranges, genetic differences, and minute details of the reproductive appendages, these all would appear to most people to be coldwater crayfish. The crayfishes, however, apparently do not interbreed. 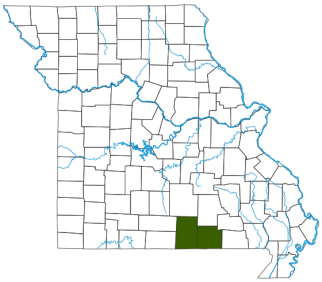 The coldwater crayfish has a very localized distribution in the Eleven Point River in the Ozark Region in southern Missouri and Arkansas.

In the Eleven Point River, this is the most abundant crayfish. It occurs over coarse gravel and rock substrate in swift, shallow water. It is often found beneath rocks, in cavities that it excavates in gravel and sand.

This is an aptly named crayfish: the water temperature, as it gushes forth from Mammoth Spring, is 58 F, year-round.

State endangered; a Missouri species of conservation concern ranked as critically imperiled. The coldwater crayfish is rare and found only in a small range, so it is vulnerable to extirpation. The Eleven Point River is clear and cold and fed by Greer Spring, one of the largest springs in the Ozarks. It is the most abundant crayfish in the Eleven Point River (downstream of Greer Spring), but it does not live in its tributaries. Populations are threatened by the presence of the ringed crayfish, a species that is invasive in the coldwater crayfish's native range.

Mating occurs in the fall, beginning in mid-September and probably extending into November, and females carry eggs between March and May. Some become sexually mature by the end of their first year, but most reach maturity during their second year. The normal life span seems to be about two and a half years.

Crayfish feed many types of wildlife, including many species that humans hunt and fish. Crayfish commonly serve as bait, plus many people eat crayfish, too. Crayfish are fascinating, colorful creatures and are part of our rich natural heritage.

Their opportunistic, omnivorous feeding makes crayfish an important link in the food chain between plants and vertebrates, breaking down plant and other materials that are resistant to decomposition. Crayfish in turn are an important food for many other animals. 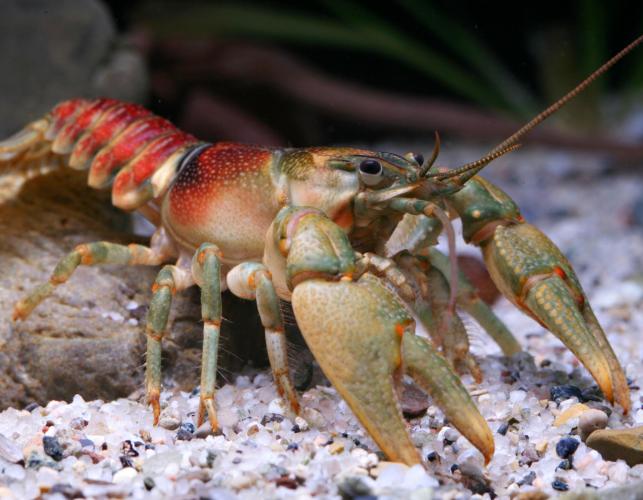 Caption
The coldwater crayfish has a very localized distribution in the Eleven Point and Spring River drainages. It is an imperiled species.
Credit
Chris Lukhaup
Right to Use
1/1
Image 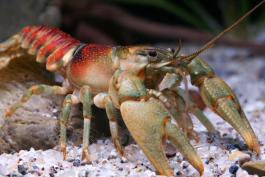