To the uninitiated, a morel does not have the most appetizing appearance. Its brain-like form looks like something out of a campy horror movie, and a morel’s neutral, earthy color doesn’t command much attention. From about late March to early May, however, foraging for these small mushrooms is serious business — a business so serious that many folks refuse to reveal their morel spots even to their closest friends and family!

The question many people ask this time of year is, “How can I find morels?” Well, morels are finicky fungal organisms. The underground portion of the fungus only produces mushrooms in some years — mostly based on soil temperature and moisture availability (but other factors play a role, too). Ultimately, most of what we know about finding morels is anecdotal and widely variable, but here are a few tips to help you narrow down good places to look for morels: 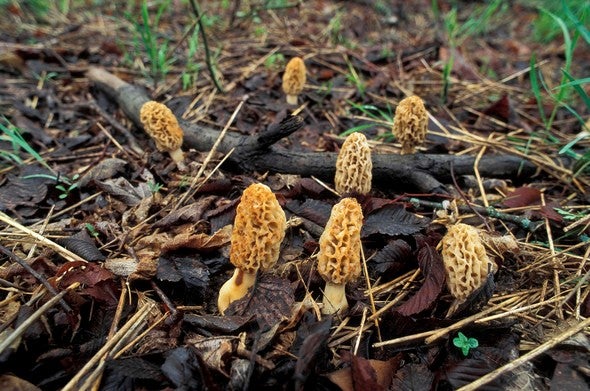 Is user submitted
Caption
Late April is a good time to find morel mushrooms. They often grow in bunches, but in varied places and not everywhere. Sometimes a morel seeker feels lucky to find just one, or if none, wild places are still fun to visit in the spring season.
Right to Use
Body

Remember, these are just general guidelines — morels have been found growing in all sorts of locations and conditions!

Before setting off into the forest, make sure you know how to correctly identify morels. Misidentifying and consuming toxic mushrooms can cause anything from mild stomach issues to organ failure or even death! There are several mushroom species in Missouri, including the big red false morel, which are considered toxic and not recommended for consumption. Consult with field guides or a professional mycologist to be completely confident in species identification before consuming any mushrooms.