In the movie, What About Bob, Bill Murray plays a character who is challenged with taking baby steps outdoors. On the other end of the spectrum, bobcats are sure-footed and stealthy. No baby steps for these wild felines that stalk and pounce on unsuspecting prey.

Bobcats are larger than house cats and have longer legs and a shorter bobbed tail. They’re good swimmers and excellent climbers.

In Missouri, bobcats prefer heavy forests with thick underbrush, broken by rock outcroppings, bluffs, glades, clearings and timbered swamps. They require an extensive range for hunting with thickets, caves and crevices for rest, shelter and dens.

Bobcats are active all year round. They may be up and about by day or night, but hunt primarily at dawn or dusk. They prey mainly on rabbits, but their diet can include small rodents, squirrels, turkey, quail, and deer, especially fawns.

Bobcats rely on their keen eyesight and hearing rather than smell.

Watch bobcats in action in the video below.

< Learn more about the bobcat with MDC’s Field Guide. 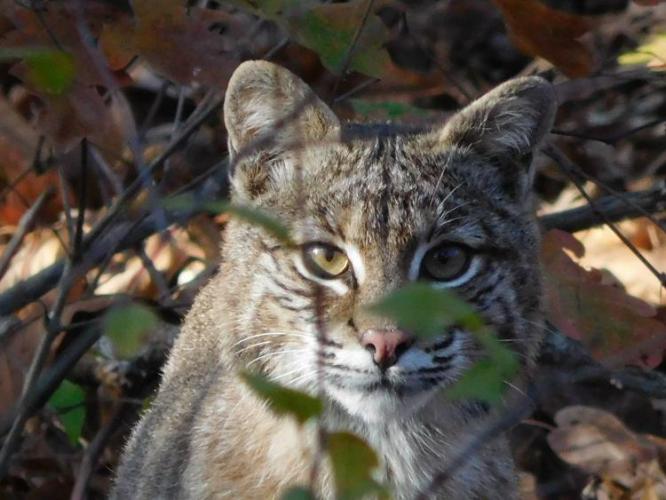 Media
Healthy Deer, Healthy Missouri
Published Display Date
Nov 18, 2022
By
Peg Craft
Body
Discover why healthy deer matter and go behind the scenes to see the dedicated work of conservation partners to maintain healthy populations and a healthy landscape in Missouri.
Media
Healthy Hiking: Fall Color
Published Display Date
Oct 26, 2022
By
Peg Craft
Body
Hike your way to health and happiness and enjoy stunning fall color at Rockwoods Reservation in St. Louis County with this week's Discover Nature Note.
Media
Creepy Critters
Published Display Date
Oct 18, 2022
By
Peg Craft
Body
Get ready for Halloween with some Creepy Critters. They are laboring all around us with some fascinating methods to prepare their meals and feed their young. Most are harmless to humans, beneficial for the environment, but deadly for their prey.